Become a Member
Read Today's E-edition
Share This
Months after brain surgery, woman plans to run Missoula Half Marathon
0 Comments
Share this
1 of 2 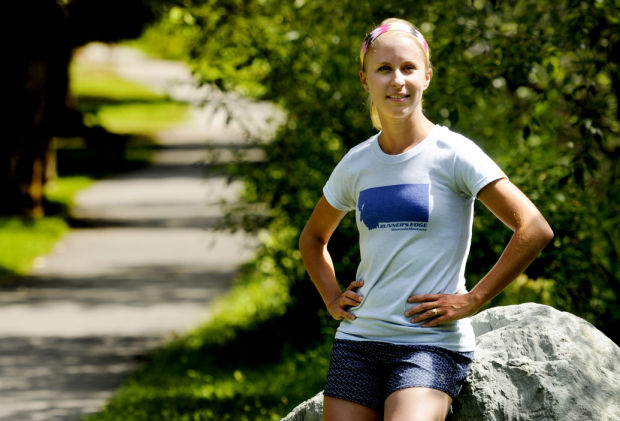 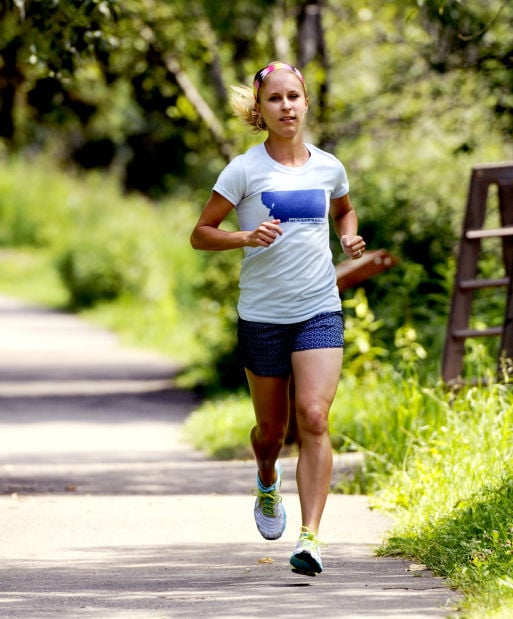 Meg Brooker awoke in the intensive care unit at St. Patrick Hospital in early April to a bit of good news. After a complicated procedure, surgeons were able to remove the entire tumor that had invaded the left temporal lobe of her brain.

The surgery to remove the mass came barely two weeks after doctors delivered shocking news to Brooker and her husband, Anders: The blurred vision the longtime competitive runner had been experiencing while trail running around Missoula was caused by a cancerous brain tumor.

“When we were sitting down in the neurologist’s office, he said, ‘Yeah, there’s definitely a tumor.’ That was the scariest part,” Brooker said. “It’s so easy to get wrapped up in Internet searches – what’s your chances of survival, if it’s going to come back. So I didn’t look.”

Instead, still facing a road full of unknowns, Brooker ran on.

On Sunday – roughly 3 1/2 months after surgery and one day before she finishes radiation treatments – Brooker will run the Missoula Half Marathon.

And why wouldn’t she?

Brooker won the Missoula Half Marathon in 2009 and until recently competed nationally with the Mountain West Track Club after running for four years in college at Towson University.

Missoula runners count on the Brookers year round to supply them with gear and advice at their downtown store, Runner’s Edge.

Anders is the marathon’s race director. After she runs, Brooker will help hand out medals at the finish line, then head to the store to work.

It’s business as usual, Brooker said. In all, the surgery only stopped her from running for about four weeks.

“For a month I didn’t run. I just started walk-running. I was like, ‘I think I can do the half, I will probably walk it,’ ” Brooker said last week, a colorful pastel patterned headband covering a small hook-shaped scar left on her head by surgery. “Then – you know how that goes – I said, ‘I think I can probably run it. I’m not fit by any means, but I think I can get through 13 miles.’ ”

Brooker started having episodes of blurred vision in March.

“I noticed this because of running. Running on trails was really hard because I was getting double vision in my right eye,” Brooker said.

The eye doctor told Brooker she had a hemorrhage behind her left eye and an inflamed optic nerve behind her right eye.

You need an MRI right away, he said.

The tumor was removed from her left temporal lobe two weeks later. Brooker was eventually diagnosed with high-grade oligodendroglioma.

After surgery, Brooker started a six-week regimen of chemotherapy and radiation, which have caused her to lose a small patch of hair on the left side of her head.

Otherwise, the effects have been minimal.

“I remember taking my first set of chemo, taking the pill and thinking, ‘Here we go.’ You think people won’t have an appetite, you won’t want to eat. The only thing I’ve noticed is I’m a little more tired than usual; if that’s the worst thing, then it’s not bad.”

It’s unusual for a patient so fresh from surgery and still undergoing treatment to feel up to running 13.1 miles, said Margie Menendez, Brooker’s radiation oncologist at the Montana Cancer Center at St. Pat’s.

“As a radiation doctor, it is unusual for my patient to feel so well they can run. There’s just a lot of fatigue,” Menendez said. “But what I have noticed is if people are young and fit and healthy, they tolerate treatment so much better, and they bounce back quicker.”

Menendez will be running Sunday as a pacer for the five-hour marathon group. Brooker’s other doctors, neurologist KC Brewington and medical oncologist Sarah Scott, are running the half marathon.

“Regular exercise, it helps them feel more mentally optimistic about their situation, which helps them tolerate it better,” Menendez said. “The other thing about people with brain tumors or cancer or anything, what is really important is to try to have a sense of normalcy. Just have as normal of a life as possible.”

Running has been a part of Brooker’s life since she switched as a freshman in high school from playing soccer to running for her school’s cross-country team.

The love for the sport of running was automatic, Brooker said.

A successful high school running career led to a track and cross-country scholarship at Towson University, near Baltimore, where Brooker ran 5K to 10K distances.

Seven years ago, Brooker found her way to Missoula. After settling in, she also found the Mountain West Track Club and continued training year-round with the small club that supports women runners who compete nationally and internationally.

“Every day, it feels like my birthday, I get all these cards and presents. It’s hilarious and it’s amazing,” Brooker said.

At the same time, Menendez said, Brooker’s courageous and positive outlook has been a great inspiration.

“When people find out something like that, the fear of it all and not knowing how it will affect their lives and what they do, that can be overwhelming. I’m just so impressed with how Meg has just stayed so positive and is always moving forward,” Menendez said. “She’s so loved by the whole community. Everybody was just devastated (by the diagnosis) ... but for them to see her and see her look so well, and see her doing all this stuff is just incredible.”

On Monday, Brooker will finish her final round of radiation.

She’ll continue taking a lower dose of chemo for a year, and have regular MRIs.

On Sunday, the half marathon won’t be a race for Brooker. Instead, it’s a chance to run with a brand-new perspective on life.

“I’m looking forward to it going into this one. There’s no pressure. It’ll give me a new perspective, running the marathon from a different position,” Brooker said. “The cool thing is you actually get to hear other cancer survivors’ stories or people who have been told they’re not going to live. They’re out there doing the exact same thing.

“You don’t wish this upon anybody, but besides getting a different perspective on life, you get to look into the lives of others so much more.”

A decade ago, Jennifer Siemens was riding her bicycle on Higgins Avenue near Beckwith Street when she was run over by a drunken driver.

Rockies winter starts with a whimper

Rockies winter starts with a whimper

Researchers finally figured out why cannabis smells like skunk

Researchers finally figured out why cannabis smells like skunk