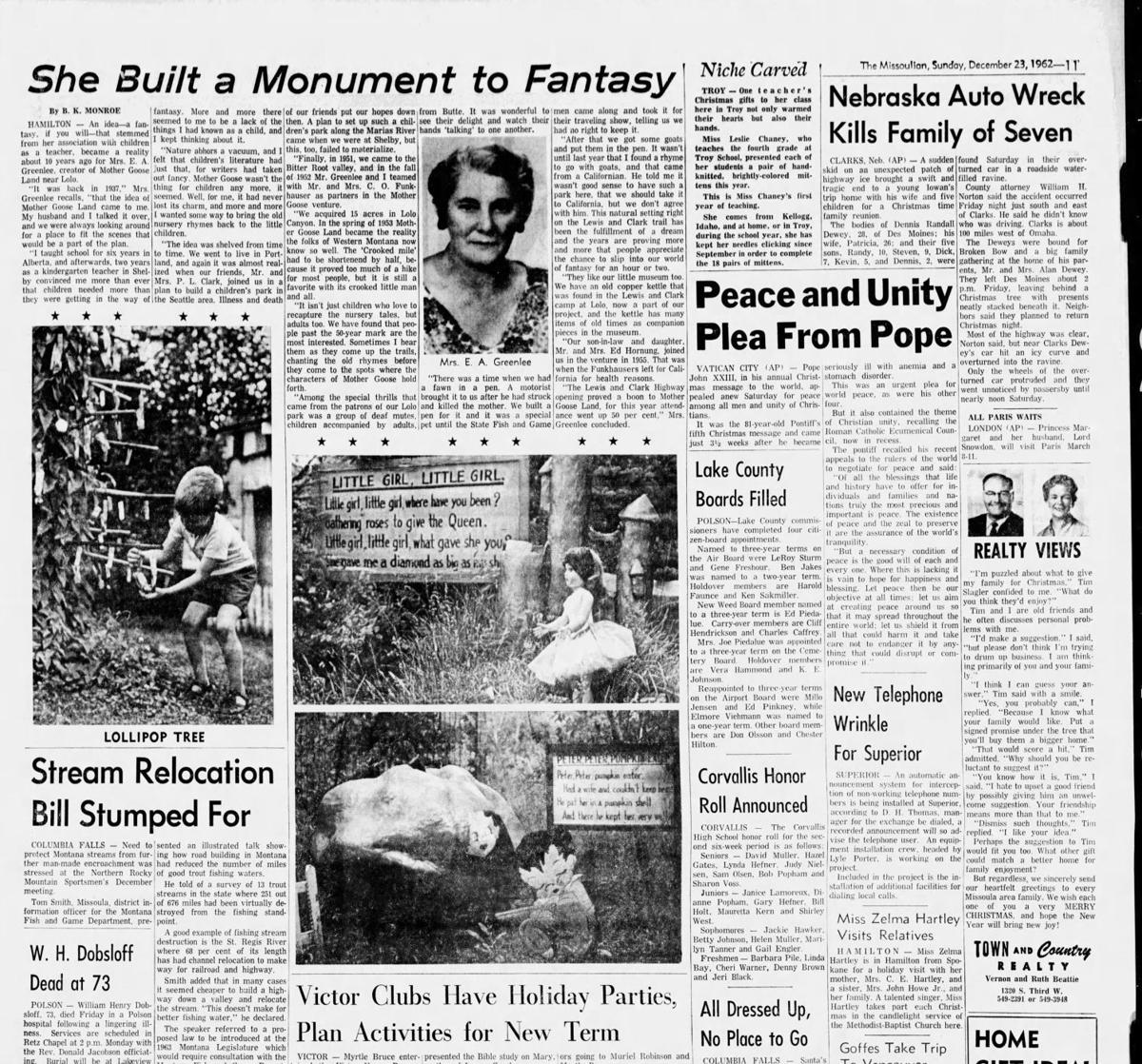 Smile if this rings a bell.

“Mother Goose Land is Something to Remember!”

To get to this new “magic wonderland” you were instructed to “go to Lolo, Montana, 11 miles south of Missoula, then 300 yards up the Lewis & Clark Highway.”

Enchantment for young and old awaits those of you who spend an hour or two walking the magic path straight into the pages of Mother Goose Land. It includes 26 figures of story books in their many different colors scattered along the winding mile long path, with rustic bridges over a rippling brook, with hedges and flowers by the wayside.

If you were a kid around here in the ‘50s and ‘60s and your parents didn’t take you to Mother Goose Land, you led a deprived childhood.

The next year the Missoulian reported that Mother Goose Land had 10 more attractions, including Jack and Jill, Little Boy Blue, Rock-a-Bye Baby and Little Miss Muffet. It opened May 23 and would run “until the first heavy frost kills the flowers next fall.”

“She Built a Monument to Fantasy” was the headline in late 1962 over an article written by Bitterroot correspondent Bessie K. Monroe.

A native Canadian, Greenlee said the idea came to her in 1937 and she and Emery began looking around for a place to “fit the scenes that would be part of the plan." She had taught school for six years in Alberta and kindergarten for a couple more in Shelby. That experience and a sense that children's literature failed to spark the imagination “convinced me more than ever that children needed more than they were getting in the way of fantasy," Greenlee said. "More and more there seemed to me to be a lack of things I had known as a child and I kept thinking about it.

"Mother Goose wasn't the thing for children any more, it seemed. Well, for me, it had never lost its charm."

The Greenlees moved to Portland after Shelby and finally, in 1951, to Victor in the Bitterroot Valley. With the Funkhousers they acquired 15 acres in Lolo Canyon and two springs later “Mother Goose Land became the reality the folks of Western Montana now know so well,” Greenlee told Monroe.

A photo that accompanied the 1962 article showed a young boy in shorts and sandals plucking a treasure from the Lollipop Tree, the prize at the end of the trail. In another, a doll stood next to a sign that carried the words to “Little Girl, Little Girl, Where Have You Been?” Yet another had a sleeping wooden Peter, Peter, Pumpkin Eater next to his poem.

The Crooked Mile proved too much of a hike so it became the Crooked Half-Mile. "But it is still a favorite with its crooked little man and all," Greenlee told Monroe.

Adults, too, loved to recapture the nursery tales of their youth.

"We have found that people past the 50-year mark are the most interested," Greenlee said. "Sometimes I hear them as they come up the trails, chanting the old rhymes before they come to the spots where the characters of Mother Goose hold forth."

Holt described a “tiny gingerbread house” that served as an information booth at the entry. The trail wound through the park that eventually sported more than 80 plywood cutouts of nursery rhyme figures. Begonias lined the trail.

“They were done so tastefully. There must have been a thousand or more,” Holt said of the flowers.

The Funkhousers moved to California for their health in 1955 and the Greenlees were joined in the venture by their daughter, Elizabeth Hornung, and her husband Ed.

Robert Savage of Strout Realty and Lyle Grenager of Lolo purchased Mother Goose Land from the Greenlees in 1967 and added a gift shop and drive-in restaurant.

That summer 50 years ago appears to be the last for Lou Greenlee’s and Lolo's “monument to fantasy.”

Villa Santino moved into downtown Missoula in 1979. Later iterations of the property included PJ’s Pizza and Pasta in the 1990s and, closest to its original purpose, the Wiggles and Giggles Daycare that existed at the turn of the century. For the past 15 years it’s been the stable and successful home to Crazy Horse Consignment, purveyor of western wear and tack.

Mother Goose Land is but a memory, a wiggle, a giggle and a smile. ​

Missoula Rewound is a weekly look at Missoula and western Montana history through the online archives of missoula.newspapers.com.

Racial tensions bubbled to surface in Missoula in '68

Missing in the Missions: UM student's mom finally got closure

The mysterious disappearance of a college student in the wilds of the Mission Mountains in 1958 took more than three decades to resolve.

New weight load signs coming to a bridge near you

“MDT needs the public’s help in understanding and following weight restrictions – for their own safety, but also to maintain bridge integrity and safeguard bridge longevity."

Feel-good stories in a time of angst

A survey of past Missoulians produced dozens and dozens of references to feel-good stories.