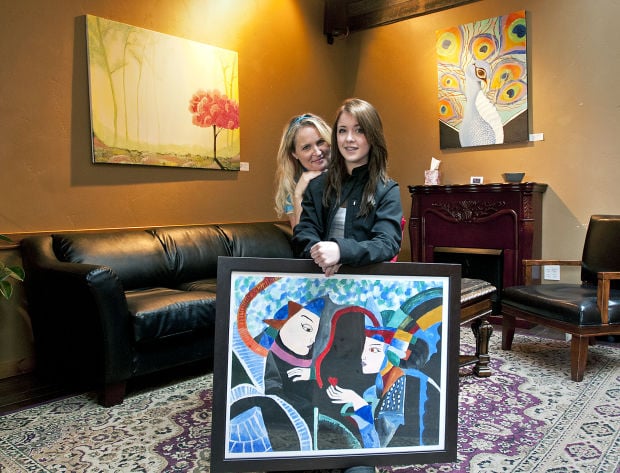 Sophia Mathis and her mother, Susi, sit with Sophia’s painting “The King and the Queen” in The Loft recently, where more of Sophia’s artwork hangs on the walls. Sophia, 12, threw herself into making art a few years ago to help her through the period when her mother was being treated for breast cancer. 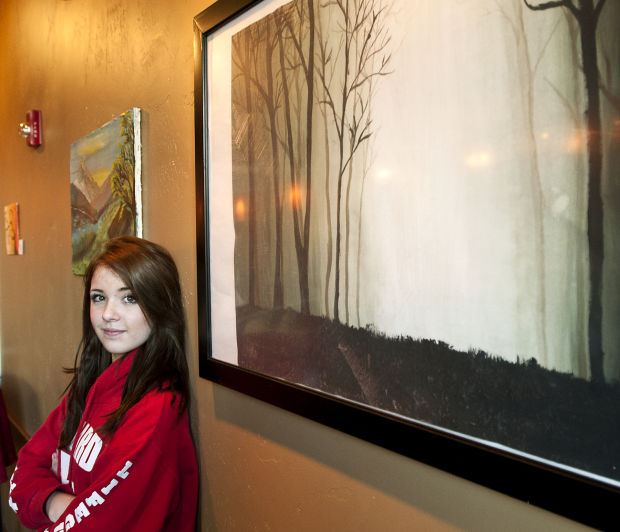 One of Sophia Mathis’ paintings on display at The Loft, “Misty Wood,” is a watercolor that was done in five minutes.

Like many children, Sophia Mathis began sketching with pencils when she was 8. The work was good, ripe with creativity and imagination – the youthful expressions of a young girl.

But what once appeared as the common dabbling of a child took a different turn in 2011 when Sophia’s mother, Susi, was diagnosed with breast cancer. The news would shape Sophia’s art, not to mention her mother’s life.

“In the fifth grade, my mom was diagnosed with cancer,” said Sophia, surrounded by her art in The Loft of Missoula last week. “It put me through this phase where it was hard for me. I needed something – I don’t know – to embrace myself with and push myself towards.”

Sophia found that embrace – that distraction – through her art; images of Mickey Mouse, colorful peacocks with swaggering tails and deep forests brooding with things unseen.

More than a dozen pieces went on display in the gallery for First Friday this month. A close review of the panels may reveal Sophia’s own fears as she watched her mother battle her disease.

“My mom was always busy and sleeping and stuff, and I helped take care of her,” said Sophia. “In my free time, I would express and show my appreciation through my art.”

It is not surprising how Sophia’s early work focused on hair. She feared her mother would lose hers through chemotherapy and radiation. Sophia battled her own nervous habit – her need to pull, twist and tease her hair, sometimes unaware she was even doing so.

An early pencil sketch depicts a girl pulling her hair in multiple directions, a frantic rendition not unlike “The Scream” by Edvard Munch. Yet if art is an evolution, the next piece – rendered in acrylics – is more refined. Instead of pulling, the woman depicted in soft elegance simply teases a single lock of blonde hair with her finger.

Sophia, too, was looking to heal.

“I was wondering if she would, like, not have hair,” Sophia said. She then speaks to her mother, as if they have not yet had the conversation. “It was shocking towards me. I was just panicked about you being in the hospital a lot. I know you have to be in the hospital a lot for cancer.”

Susi remembers the date well. It was Sept. 27, 2011, when she got the news. The diagnosis was breast cancer.

The following year would be filled with visits to the hospital; six surgeries and countless rounds of chemotherapy and radiation.

While difficult, Susi’s battle with cancer was not the hardest number in the equation. Rather, it was dealing with her daughters and breaking the news.

“It took four days before I could tell them and not choke up,” she said. “I was nervous if they’d wonder if mom would not be around. Breast cancer has changed so much, but that was my fear. What do you tell them? What do you tell your kids?”

In the four days that she kept the news to herself, Susi browsed the Internet looking for answers. When the answers came and the time was right, she gathered her daughters, her former husband and his new wife, and gave them the straightest answer she could.

“We got together and I said, ‘Mom has cancer, and what kind of questions do you have?’” she said. “It was hard to be with them and try not to have them panic while I figured out what to say and do.”

Sophia’s questions came as a surprise, and they still make Susi laugh when she thinks back on them. Would the doctors be using staples or glue? Could the disease somehow jump to a new host, as if cancer was a common flea? After all, Sophia was feeling something strange in her foot. Was that cancer, too?

And what about her mother’s hair?

There is a painting that might explain Sophia’s thoughts at the time, though she denies it. Later in her artistic progression and her mother’s treatment, the piece depicts a women draped in an elaborate and colorful scarf.

“I asked her if that was supposed to be me with the scarf,” Susi said. “Sophia told me, ‘It’s not always about you, mom.’”

She recently passed her nursing board exams, never mind her battle with cancer while running the cardiac rehabilitation center at Providence St. Patrick Hospital. Somehow she found time to study, run the family and overcome the disease.

Sophia, now 12, continues to paint, exploring new mediums including watercolors and oil. Her work was recognized last summer at the Missoula County Fair, where she won the Helen Getz Award. If she could, she would mentor with Monte Dolack.

Her mother looks at her quizzically, wondering where she finds the motivation to paint. Where does she find her ideas?

It is a question Sophia cannot yet answer. Inspiration comes from mysterious places. And while some of her work brings back poor memories, Sophia likes the direction things are going.

She still finds solace in her work.

“I like to play with my hands a lot,” she said. “But art makes me have something to do with my hands. I can get lost into the paintings. Sometimes I don’t even know what I’m painting.”

The road to recovery for those suffering from life-threatening illnesses, or who struggle with depression after the loss of a loved one, is lo…

Providence St. Patrick Hospital was recently recognized as one of the nation’s 100 Great Community Hospitals for 2014.

Sophia Mathis and her mother, Susi, sit with Sophia’s painting “The King and the Queen” in The Loft recently, where more of Sophia’s artwork hangs on the walls. Sophia, 12, threw herself into making art a few years ago to help her through the period when her mother was being treated for breast cancer.

One of Sophia Mathis’ paintings on display at The Loft, “Misty Wood,” is a watercolor that was done in five minutes.