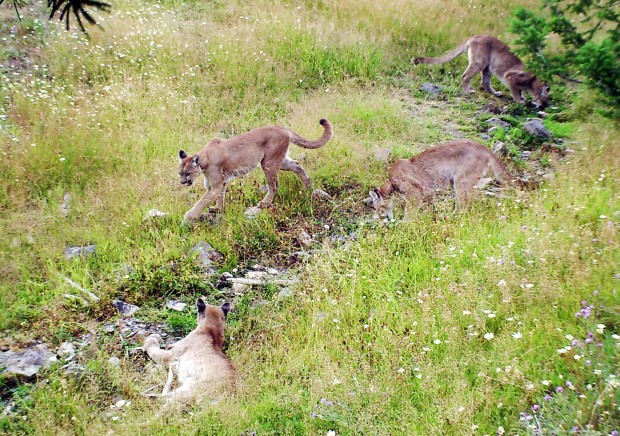 In this image captured by Drew Shearer's Stealth Cam on Aug. 20, four mountain lions can bee seen lounging by a small creek in the Eight Mile Creek drainage east of Florence. Bitterroot National Forest biologist Dave Lockman surmised that it is an adult female and three older juveniles. 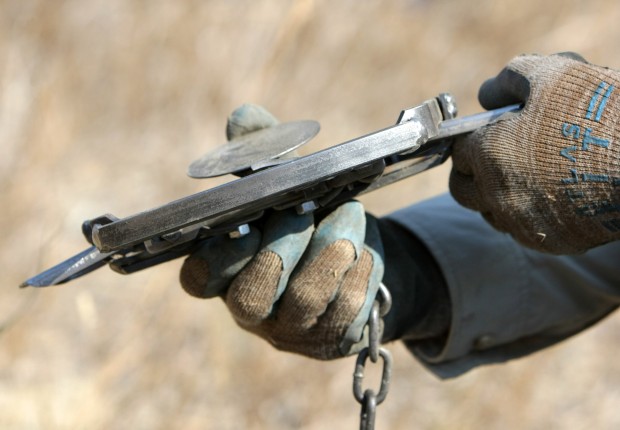 Mike Ross of Montana Fish, Wildlife and Parks holds a wolf trap during a class in Billings in September.

HAMILTON – Montana’s mountain lions need to be careful where they step for the next two months.

Another mountain lion was caught in a furbearer trap in the Bitterroot Valley.

Pauley said that is to be expected.

Even though a mandatory wolf trapping course taught fledgling trappers ways to prevent capturing other animals in their traps, it will happen on occasion, he said. Wolf traps are larger and more capable of holding predators the size of a mountain lion.

In Montana, wolf trappers are required to report when they capture animals other than wolves in their traps.

The animals are required to be released.

“They are welcome to release mountain lions themselves, although that can be quite an undertaking,” Pauley said. “They are encouraged to get in touch with FWP to get some help in turning those animals loose.”

One of those was captured in a bobcat trap.

“Usually when a mountain lion gets caught in a bobcat trap, they can pull themselves out of it,” Royce said. “The wolf sets are larger and a lion is not going to be strong enough to pull itself out. We are probably going to have to respond to more of those this year.”

Trappers are allowed to use bait and scent to bring wolves into their traps.

The mountain lion was captured in a wolf trap with wolf urine used as attractant.

“I have no idea why a mountain would go into a wolf urine scent,” Royce said. “This is all brand new to us. We are sure to learn some things.”

Wolf trapping is a little different from other forms of trapping.

“It seems to me that it’s a lot more technical,” Royce said. “I’ve been told that if wolves smell people at all, they won’t come anywhere near the traps.”

“I don’t think there is going to be a ton of guys doing it just because of the expense,” he said. “It can cost $150 to $200 to get a trap totally set up. The real cheap ones won’t catch wolves.”

Pauley said trappers were taught the best traps to use during the mandatory orientation course, including which traps work best to cause the least amount of damage to an animal.

Trappers were also told how to modify their traps to make them less harmful to other animals that might that might inadvertently be captured.

Those methods included filing off sharp edges on the corners of the trap and laminating an additional piece of steel on the trap’s jaws to make for a wider surface that would cause less damage, Pauley aid.

Trappers were also shown how to include an inline spring to the anchor chains that will provide some give when animals attempt to escape.

“I understand that can be really effective in minimizing damage,” he said.

Former Sula-area mountain lion hunter Cal Ruark said that while he’s not totally against trapping, he does worry about its impacts on the lion population.

“What upsets me is that even if those lions will be turned loose, they easily could end up losing some toes,” Ruark said. “If that happens, their ability to travel is impaired. Their ability to hunt is impaired. If their front toes are missing and they can’t climb a tree, any encounter with lion hunting dogs will not go well.”

Years ago, one of Ruark’s hounds was caught in a trap. Even though he did everything he could, the dog ended up losing two toes.

“They just eventually fell off,” he said. “From then on, whenever that dog would try to run, its foot would get bloody. I can’t imagine that a lion wouldn’t be the same way.”

“I’m not against lion hunting or hunting wolves, but I think we just need to be really careful about what we’re doing out there,” Ruark said.

As of Sunday, seven wolves had been trapped statewide. A total of 102 have been killed in this year’s hunting and trapping seasons.

Reporter Perry Backus can be reached at 363-3300 or at pbackus@ravallirepublic.com.

HELENA – State wildlife officials asked lawmakers Thursday to make it easier to hunt and trap wolves in Montana, while a Bozeman legislator ba…

HELENA — A plan to close two areas to wolf trapping just north of Yellowstone National Park will be the topic of a special Fish, Wildlife and …

A trapping class for non-trappers drew a full house to the Missoula Fish, Wildlife and Parks classroom on Thursday as dog owners came to learn…

In this image captured by Drew Shearer's Stealth Cam on Aug. 20, four mountain lions can bee seen lounging by a small creek in the Eight Mile Creek drainage east of Florence. Bitterroot National Forest biologist Dave Lockman surmised that it is an adult female and three older juveniles.

Mike Ross of Montana Fish, Wildlife and Parks holds a wolf trap during a class in Billings in September.