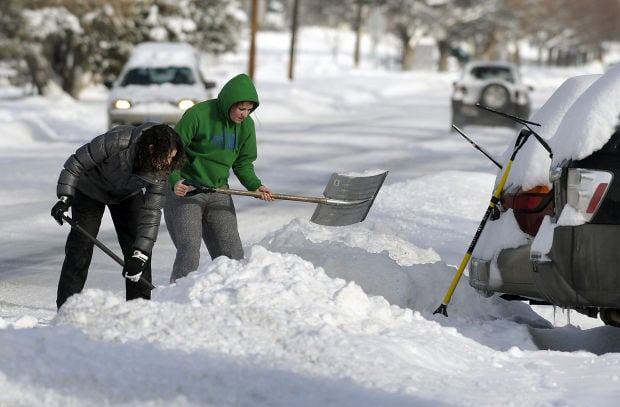 Courtney Nichols, left, and Chantal DesJardin clear a path through plowed snow to get their vehicles out of the driveway Tuesday. 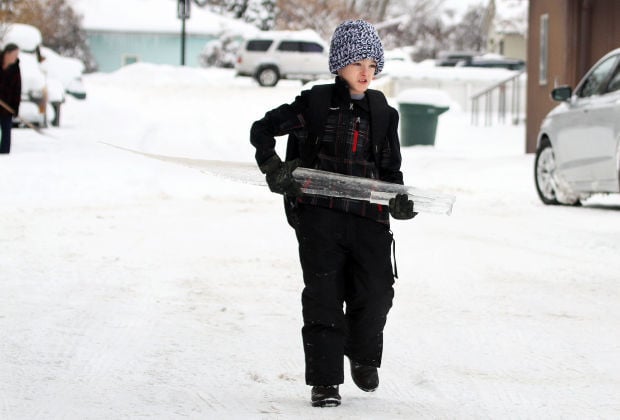 Ten-year-old Gregory Perez was ready for a school day of show-and-tell after finding an icicle nearly as tall as he. Perez was packing his prize to Corvallis Elementary on Tuesday morning as the rest of the community dug out for another large snowfall.

The difference between blizzard-like and actual blizzard conditions should become apparent Friday, when the National Weather Service predicts the real thing will blow all over the U.S. Highway 93 corridor.

“This storm has been in the models for about 10 days, and it’s been remarkable to watch the evolution,” NWS meteorologist Corby Dickerson said Thursday. “It will (be underway early Friday morning) and continue, if not get worse, on Saturday morning.”

“It” is snow with strong winds that should cause whiteout conditions in the East Missoula/Bonner area, through the Hellgate Canyon and into downtown Missoula on Friday morning. To qualify as a blizzard, it must have sustained winds or frequent gusts of 35 mph or more reducing visibility to a quarter-mile or less for at least three hours. Friday qualifies.

“It’s going to be downright impossible to go anywhere,” Dickerson said. “This will be a true blizzard, which will significantly affect much of Missoula, the northern Flathead and travel corridors across the Continental Divide. Driveways and walkways and other pathways will become drifted over, and whiteout conditions will be commonplace for a good period of time.”

The blizzard warning also extends through the Bitterroot Valley south to Darby and Lost Trail Pass. Most of the Highway 93 north-south corridor received freezing rain Thursday afternoon, which was expected to transition to snow and howling wind about 2 a.m. Friday.

At higher elevations, the freezing rain already had switched to heavy snow by Thursday afternoon, which could create problems of its own.

“The warm weather we had (Wednesday) left a sun crust on the snow,” said Steve Karkanen of the West Central Montana Avalanche Center. “What we’re concerned about is how this new snow will bond to that surface. If we get this big storm, especially the high winds, its definitely going to increase avalanche danger.”

“Keep an eye on our Facebook and web pages,” she said. “Weekend games will also be affected.” Any cancellations or delays also will be on Missoulian.com and on the Missoulian’s Facebook page.

Snowfall between 5 and 7 inches should start falling before dawn Friday in the Missoula Valley. The winds should arrive just as everyone’s heading for work, with sustained blows of 40 to 50 mph and gusts up to 60 mph forecast. That could drive wind-chill effects into the minus 20 to minus 40 degree range.

The snow should abate as Friday wears on, but the winds should keep coming from the east at about 20 mph. Another punch of arctic air should flow across the Continental Divide into the Missoula area late Friday afternoon, about the time everybody’s heading home.

Dickerson said those winds should get stronger overnight, with Saturday expected to have a low temperature around zero and struggle to reach the lower teens for a high. The air should stay breezy all day.

By Sunday, the cold should be settled in tight, with a low of around minus 5 degrees. However, another moist weather system from the Pacific Coast is expected to arrive sometime Sunday evening or early Monday. Details of that storm are still under analysis.

Not everyone was taking the storm news as bad, however.

“For those of us who recreate in the backcountry, this is great,” Karkanen said. “This is what we live for.”

The inclement weather has caused numerous closures and cancellations in Missoula County for Saturday.

The Missoulian is working diligently, but safely, to deliver Friday's newspapers. We have many carriers who are stuck in the deep and drifting…

Ride Mountain Line for free; some routes detoured by snow

Mountain Line is offering free bus rides in Missoula Friday and Saturday on all routes due to the blizzard.

The overtime budget is blown, but most Missoula streets got plowed Thursday before the storm hit.

With blizzard in forecast, Mountain Line to give free rides Friday

Mountain Line will provide free bus rides Friday because of a blizzard watch.

GREG TOLLEFSON: Reveling in a blast from the past: A good old-fashioned winter

Just when you start to get used to the idea that you will never experience a good old-fashioned winter again, one comes along. I don’t know ab…

As snow rises, so does avalanche risk, deaths

SEATTLE – Skiers and snowboarders rejoiced when a series of storms dumped several feet of snow in the mountains across the West, after what ha…

A record that stood since 1939 got buried Monday when 7.9 inches of snow fell in the Missoula Valley.

Courtney Nichols, left, and Chantal DesJardin clear a path through plowed snow to get their vehicles out of the driveway Tuesday.

Ten-year-old Gregory Perez was ready for a school day of show-and-tell after finding an icicle nearly as tall as he. Perez was packing his prize to Corvallis Elementary on Tuesday morning as the rest of the community dug out for another large snowfall.