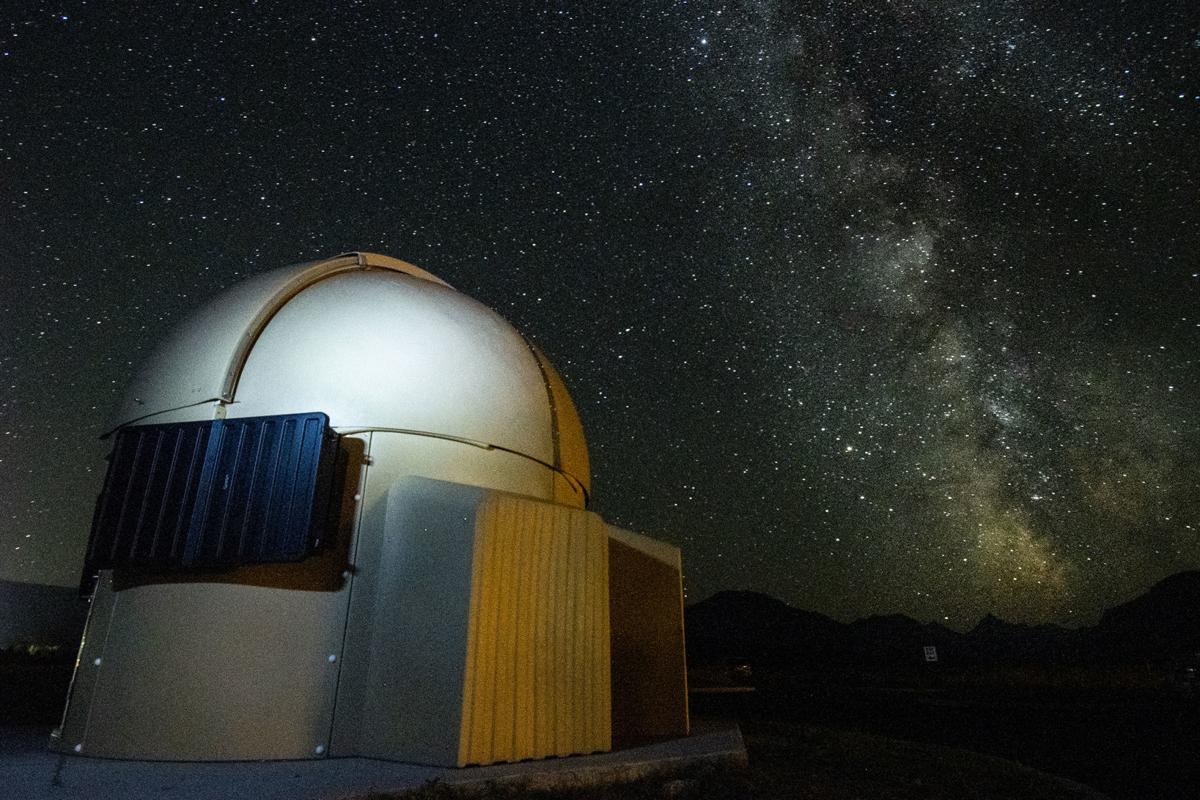 Dusty Skies Observatory sits on the eastern boundary of Glacier National Park near the St. Mary Visitor Center. The observatory was recently completed by Lee Rademaker, lead park ranger and astronomy coordinator for the park. 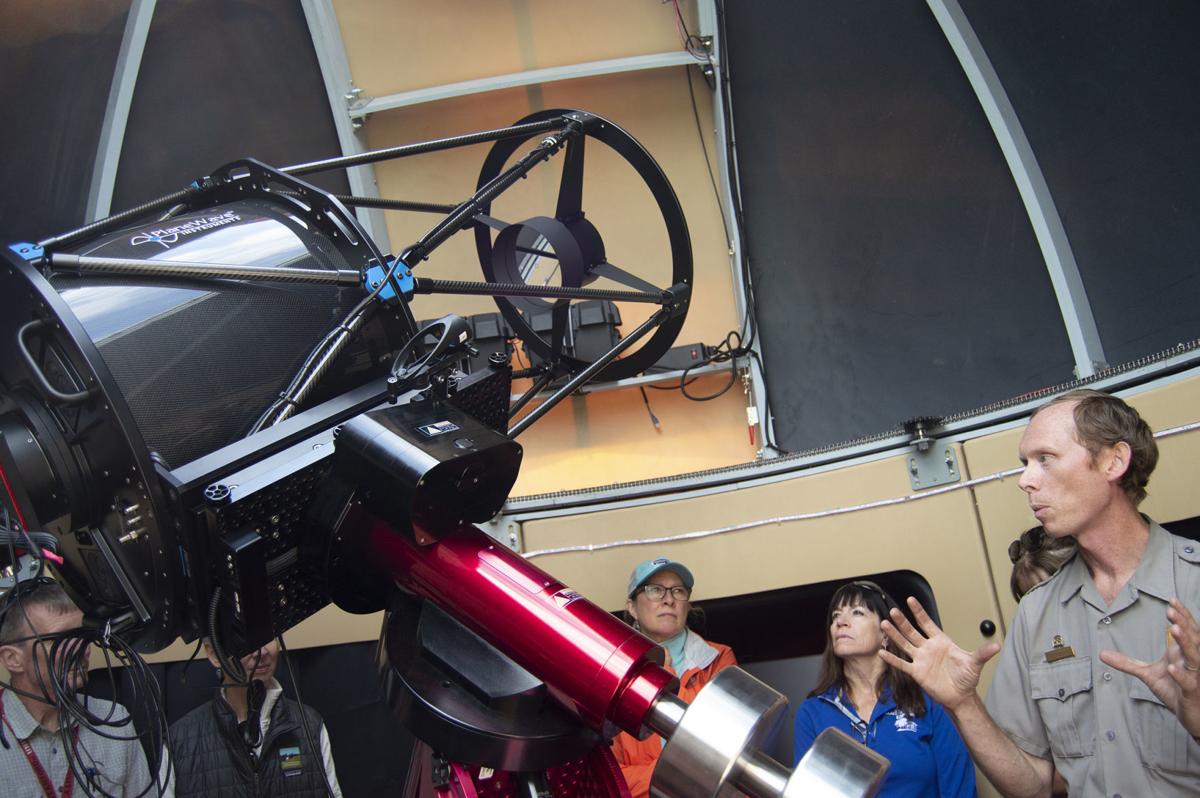 The Glacier National Park Conservancy contributed more than $200,000 for the International Dark Sky project, including funding for the observatory and telescope. 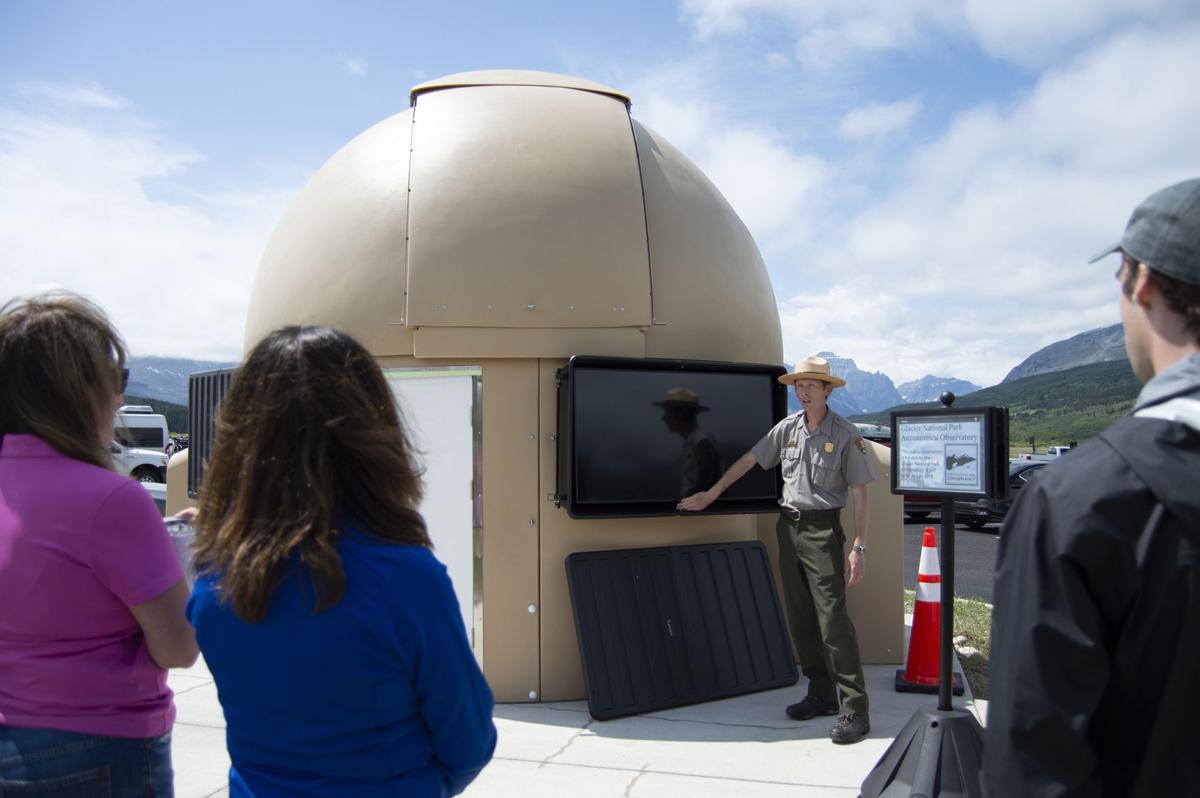 Dusty Skies Observatory sits on the eastern boundary of Glacier National Park near the St. Mary Visitor Center. The observatory was recently completed by Lee Rademaker, lead park ranger and astronomy coordinator for the park.

The Glacier National Park Conservancy contributed more than $200,000 for the International Dark Sky project, including funding for the observatory and telescope.

ST. MARY — Viewing the orange, turquoise and blue ghostly halo of the Ring Nebula was pretty cool for the group attending the recent celebration of the new astronomical observatory at the St. Mary Visitor Center in Glacier National Park.

Zooming in on the Dumbbell Nebula to view its apple-core outline, complete with a red skin, also drew some gasps.

But the piece de resistance came toward the end of the evening, when the graceful, sweeping arms of the Whirlpool Galaxy appeared on the two 55-inch monitors on the exterior of the newly named “Dusty Star Observatory.” The long arms actually are lanes of stars and gas laced with dust and are star-formation factories, according to NASA.

“That was one of the coolest things at the end of the dedication,” Lee Rademaker, the lead park ranger interpreter and astronomy coordinator at the park, said on Friday. “It’s a spiral galaxy and looking down from the top you can see the separate arms. At the edge of that galaxy, another was brushing by as it moved past and you could see the spiral arms interacting. That’s not something you can normally see with a telescope.

“People were really excited when it came on the screen.”

That view wouldn’t have been possible in Glacier before last week’s opening of the observatory. Previously, park staff put telescopes in the St. Mary parking lot or groups met at Logan Pass, and people looked through a single-lens eye piece. Between the typical blowing winds and squinting through the eye piece, the view of the stars was somewhat limited.

But today, with the new PlaneWave 20-inch Corrected Dall Kirkham telescope — which lists for around $35,000 — more of the night sky unfolds before park visitors. The telescope is among the largest in Montana.

“This new telescope is something we couldn’t do without the observatory. It needs to be inside a structure,” Rademaker said. “We were surprised at the amount of color and amount of light in some of those deep sky objects; traditionally with the eye pieces you can’t see the color. You can only see the light.”

“It goes back a couple years to an idea by the Big Sky Astronomy Club,” recalled Doug Mitchell with the Conservancy. “Along with (former ranger) Mark Wagner, they put together star parties with a bunch of telescopes at Apgar and Logan Pass. It was wildly popular.”

In fact, more than 30,000 visitors attend astronomy education programs each year in Glacier, including the Logan Pass star parties.

As interest grew in stargazing, the Glacier/Waterton collaboration resulted in the International Dark Sky Park designation in 2017. Officials note that national parks have some of the darkest skies due to the lack of development, and they “provide visitors with a window into some of the biggest questions we ask as human beings.”

“It’s really cool to think about how far we have come in a short period of time by a group of people that care about this,” Mitchell said, adding that as part of the Dark Sky designation, staff at Glacier inventoried the lights in the park and are replacing those that shine into the night sky. “This ended up as something no one in their wildest dreams would have thought of three years ago.”

Rademaker said they did a number of programs during the summer using the new observatory, but it took until this month to work the bugs out and host the dedication ceremony. The observatory won’t be open to the public again until next June, with astronomy programs beginning in July. Meanwhile, he expects to do some “fine tuning” to improve the optics.

Because of the sensitive nature of the equipment, visitors won’t be allowed inside the observatory. But they can watch the skies on the exterior high-resolution monitors.

Observations also are recorded as videos, and can be sent to classrooms or other scientists. Mitchell said that because the telescope is computer operated, with the ability to lock onto an object in deep space and rotate to follow it, the telescope could be used remotely by scientists.

“The Glacier National Park telescope can be a resource for scientists all over the world,” Mitchell said. “You could be in Bhopal, India or New York, New York — the power and extent of that is fascinating to think about. It makes possible so many things that weren’t possible with a telescope on a tripod on Logan Pass.”

Most Montanans see the Missouri Breaks through a rifle scope.