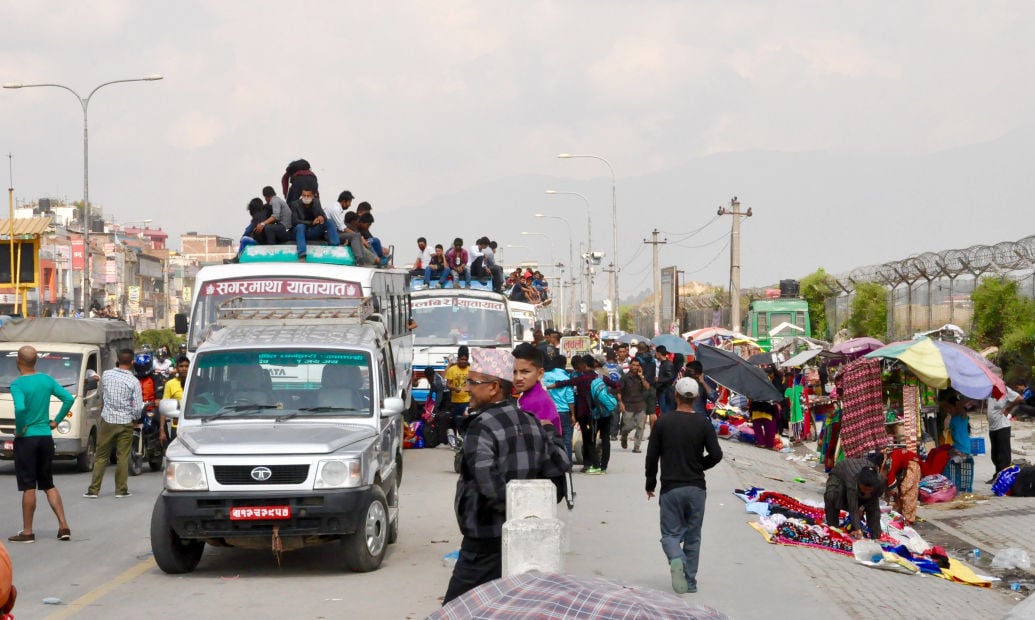 Vendors of clothes, toys and food pack the roadsides of Kathmandu's main bus transit hub as more than a million city residents look for rides out of the capital to their family homes. The October Dasain festival is a time of gift-giving in Nepal, with lots of last-minute shopping. 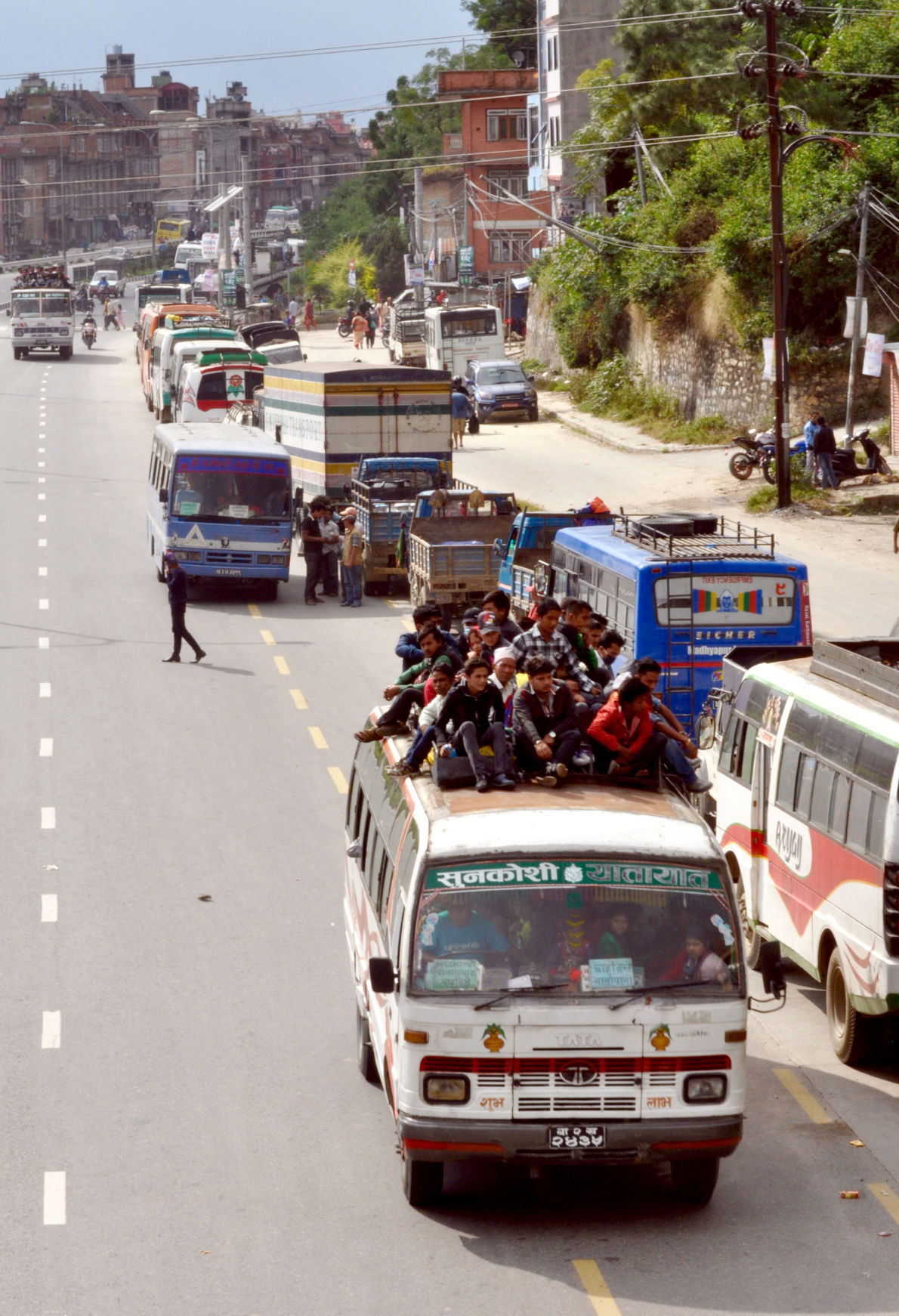 Kathmandu residents pack any moving vehicle to get home for the Dasain holiday, a 10-day festival. The ongoing fuel crisis has left thousands of vehicles idle, waiting in miles-long lines for gas and diesel.

Vendors of clothes, toys and food pack the roadsides of Kathmandu's main bus transit hub as more than a million city residents look for rides out of the capital to their family homes. The October Dasain festival is a time of gift-giving in Nepal, with lots of last-minute shopping.

Kathmandu residents pack any moving vehicle to get home for the Dasain holiday, a 10-day festival. The ongoing fuel crisis has left thousands of vehicles idle, waiting in miles-long lines for gas and diesel.

BHAKTAPUR, Nepal – This is a story about getting a story.

Missoulian Matt Skousen runs Everest Designs, a winter-wear business that gets its hats, jackets and sweaters from Himalayan Knitwear, an innovative factory in Bhaktapur.

That's about 10 miles from the capital, Kathmandu, although Google estimates it takes 34 minutes to get there on the Arniko Highway.

But because of an ongoing political fight with India, Nepal is in its third week of a fuel embargo.

Taxi drivers were asking between four and six times their usual fare to go anywhere – if you could find one. Conversations about hiring a car for a day to cruise around Bhaktapur tended to start with rueful laughter.

But Skousen had an alternative.

"Really, being there with no cars on the road is very special," Skousen wrote in an email. "Take complete advantage of the moment and get out and about."

So we borrowed a couple of bikes and pedaled out of town.

Nepali political groups aligned with India have been protesting some provisions in Nepal's one-month-old constitution. One demand is to make it easier for Nepalis on the Indian border to have dual Indian citizenship, which would give India greater influence over Nepal's elected officials.

The border parties' tactic has been an economic blockade of the customs ports, which has left thousands of commercial trucks stranded on the Indian side. Nepal spends about 40 percent of its annual budget on petroleum imports. Virtually all of that comes by truck from India.

Adding to the frustration, the Gorkha earthquake did its worst damage in the Sindhu Palchok region northwest of Kathmandu.

That's near the border with China, and the international highway there has been wrecked since April. (Nepal only has two roads to China across the Himalayas.) When it reopened last week, government dignitaries from both countries greeted the first trucks.

Last Tuesday, Kathmandu authorities allowed private vehicles to buy gas for the first time in 12 days. People lined their cars and motorcycles up for a day in advance, waiting for a share of about 160,000 gallons of fuel. Two-wheeled vehicles were allowed 1.3 gallons. Four-wheeled vehicles got 4 gallons.

Tuesday also was the start of Dasain, a 10-day Hindu festival celebrating harvest time, family gatherings and worship of factories, machines and vehicles.

Typically, about 2 million Kathmandu residents leave for their hometowns elsewhere in Nepal, typically by bus. This year, because of the fuel crisis, about 400,000 bus seats were unavailable.

A few things about Nepali traffic. First, they drive on the left side of the road, so an American tourist is goofy-footed from the get-go. Second, there are almost no traffic signals. Some major streets have traffic cops standing in the middle, but their only function seems to be admonishing drivers who appear too reckless. I never saw one actually stop one vehicle to let another pass.

And third, everything is in the road: diesel buses, cows, motorbikes, rickshaws, grandmothers, dogs, vendors hauling everything from cotton candy to refrigerators on foot, and on Friday, my daughter Ania and me on bikes.

Dawa lived in the United States for about 12 years, and he said it took him three months to get back in the swing of hometown driving.

"I found out I really missed it," Dawa said. "In the States, it's all lines and rules. Here there's this sense of freedom. You just do what you're gonna do."

And remarkably, everyone else does the same and doesn't appear to die too often. The cars are remarkably dent-free, despite constantly passing within inches of one another. And QUIET. Nepali drivers use their horns constantly because their engines are so well muffled, you don't hear them coming. The one Harley Davidson motorbike we encountered was like a bagpipe in a string orchestra.

In a week of wandering around Kathmandu, I've seen one ambulance on a run – and it was a struggle to find it. Its single roof light blinked so casually, I thought it was perhaps late for an oil change appointment. There are more fender-benders in Missoula on an average day than I've seen in 10 over here.

Which is not to say pedaling two-wheeled into this motorized blender carried any sense of personal safety.

Dawa led us through Kathmandu's commercial district toward Tribhuvan International Airport, milling with travelers bumming rides from passing motorcycles in the absence of taxis.

Then we headed east on the Arniko Highway, a theoretically four-lane thoroughfare.

While we bicyclists stayed mostly to the shoulder, Dawa led us across lanes at will to get where we needed. We passed motorcycles puttering slow to conserve gas, and wove between cars and trucks as they swung over to exit or enter.

Then we reached the transit hub.

Less a designated depot and more a mile-long stretch of waiting buses, this is where those 400,000 Kathmandu residents were looking for rides to out-of-town family.

And being Dasain, they were scrambling to do last-minute gift-shopping from the hundreds of vendors on the roadside. Everything from down jackets to wristwatches was on display, along with herds of unwary goats waiting for a bus ride to a sacrificial banquet next week at the end of the festival.

Those without the funds to ride in the bus rode on the bus, linking together in masses on the rooftop luggage racks. We biked through the circus, desperate to take pictures, but terrified to let go of the handlebars. (Dawa frequently pedaled with his hands in his pockets, however.)

The three of us slalomed around buses and passengers and goats and clouds of diesel exhaust like some 3-D video game where the walls are constantly shifting in your direction.

We came out the other side feeling like the runners with the bulls at Pamplona had nothing on the bikers with the buses at Arniko. But to be honest, the fuel crisis meant we did it at about one-quarter of Kathmandu's normal traffic. We survived amateur hour.

We also made it to Bhaktapur in 40 minutes.

PHORTSE, Nepal – You stare into the void, and the void stares back. And so does a yak.

Nepal Connections: Trail to Everest under repair, open for business

NAMCHE BAZAAR, Nepal – Pasang Sherpa, and the rest of the Sagarmatha National Park, are open…

KATHMANDU, Nepal – Traffic has been mild in Nepal's capital city, but that's not a good thing.

Peaks and people: Montana and Nepal linked by Buddhists, Sherpas and scholars

ARLEE – Poke a hole through the globe on Nepal and you come out in Montana.

PHARPING, Nepal – A cave in these hills an hour south of Kathmandu reaches all the way throu…

Nepal Connections: Walking the traditional, and only, way to explore Sagarmatha National Park

NAMCHE BAZAR, Nepal – The airport just above town has sprouted weeds in the runway.

Reporter Rob Chaney is in Nepal this month, studying the connections between that country and western Montana, in cooperation with the International Reporting Project.

PANGBOCHE, Nepal – The spire of Ama Dablam was lost in clouds when Ang Dawa Sherpa found something even better to look at.

On the roof of the world: Time takes a different path in Nepal

THUBTEN CHHOLING, Nepal – “Nepal is 100 years behind the times,” Ang Dawa Sherpa lamented as we watched a farmer plow his potato field behind …

Montana teaches the world how to get critters across the road

As Montanans brace for the season of icy driving and deer in the headlights, the rest of the world’s traffic experts are gathering to find way…

On the far side of the world, rangers trying to protect tigers in Nepal depend on maps made in Missoula.

PHORTSE, Nepal – Pasang Diki Sherpa couldn’t contain the excitement in her voice as she burst into the dining room of her guest house with a f…

In all the presidential campaign uproar over international trade, a little-noticed agreement with Nepal will have a direct impact on Missoula.