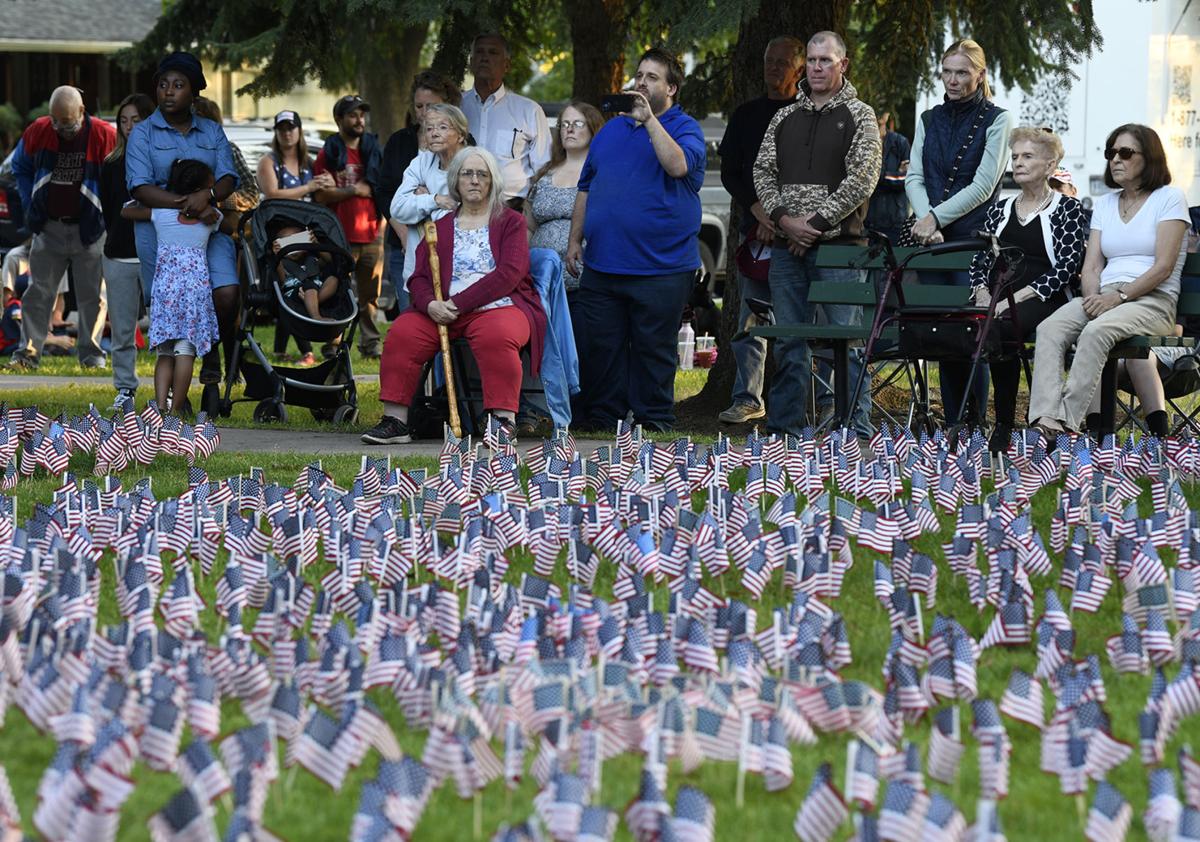 The public listens to speakers at the "Never Forget" event in Rose Memorial Park on Saturday to mark the 20th anniversary of the terrorist attacks of Sept. 11, 2001. 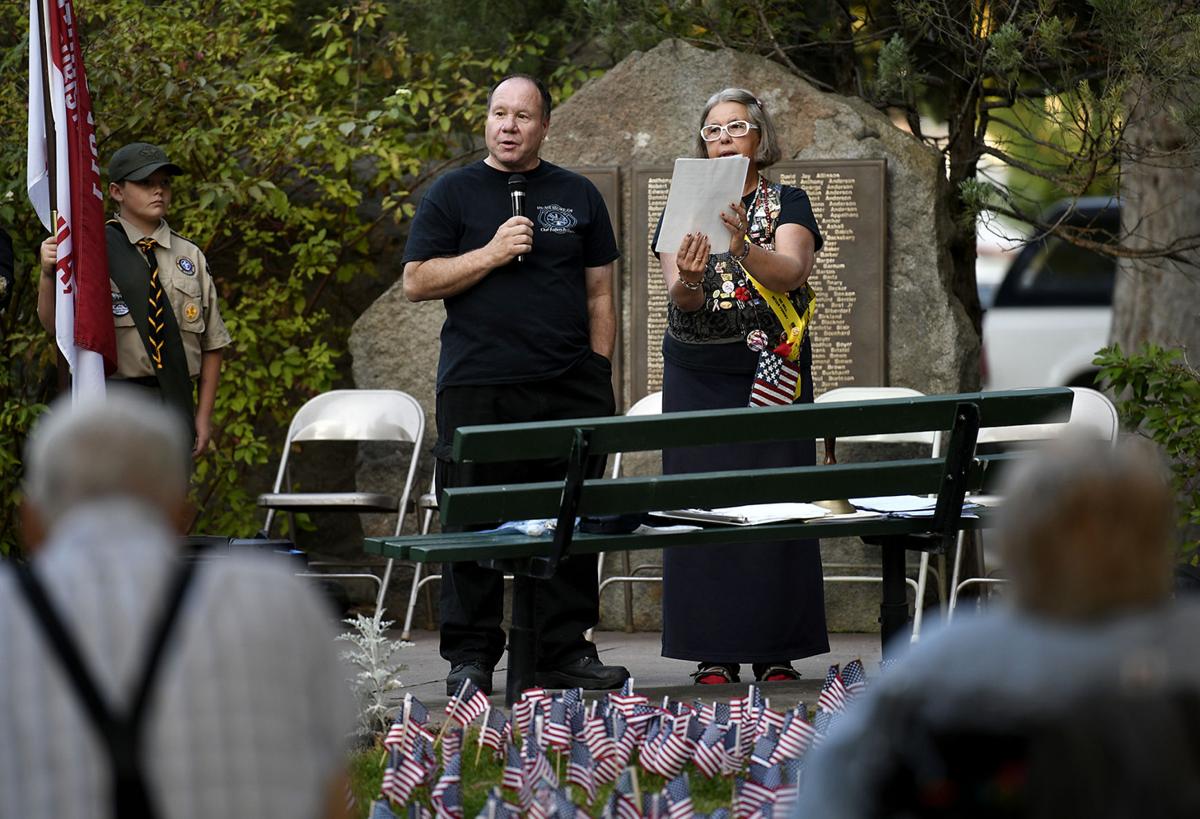 Retired Missoula firefighter Tom Zeigler reads the names of firefighters who died in the collapse of the World Trade Center towers with help from event organizer Susan Campbell Reneau.

As the sun began to set on Saturday in Missoula, the somber notes of "Taps" floated out over thousands of tiny American flags planted in the ground at Memorial Rose Garden Park to mark the 20th anniversary of 9/11.

Organized by Susan Campbell Reneau, the 19th annual "Never Forget" service drew a crowd of well over 200 people to honor all those who died that day and the sacrifices made by first responders.

Captain Bill Burt, a deputy with the Missoula County Sheriff's Department, dedicated his remarks to the police officers who died in the attacks.

"The terrorist attacks on September 11 resulted in more law enforcement line-of-duty deaths than any other single incident in our nation's history," Burt said.

"Seventy-one officers were killed when the twin towers collapsed," he added. "Dozens more passed away in the years following 9/11 as a direct result of illnesses contracted while working in hazardous conditions conducting rescues and recoveries."

Those men and women are "true American heroes," Burt said.

"Now perhaps more than ever, it's important we stand together as a community and as a nation to make sure that we never forget the events of 9/11 and the sacrifices so many have made," Burt said.

Tom Zeigler, a retired Missoula Rural Fire Department firefighter, told the crowd how he had befriended members of a New York City-based fire crew during a training operation in Montana. Many of them later died on 9/11.

Zeigler read their names, noting that he and other firefighters had helped find their bodies amid the wreckage. Some, however, were never found.

Ryan Zinke, a retired Navy Seal commander who is running for Congress, read the names of the 13 U.S. military personnel who were killed in a bombing in Afghanistan in August of this year.

Dale Stovall, a retired Air Force brigadier general who conducted special operations missions in the Middle East, said he's in awe of the bravery of those who lost their lives saving others on 9/11.

"Think about this," he said. "If you're a firefighter, and you see those two towers burning, and you're gonna go up there, up 90 floors carrying a fire hose and trying to get that fire out, and others are going up 60 or 70 floors trying to bring hundreds of people out of that building, when they very well know this is not going to turn out good."

Firefighters were still going into the North Tower after the South Tower collapsed, Stovall said.

"So that tells you the character that those firefighters had," he said.

Stovall pointed out that his friend Ron "Rondo" Scharfe, a 94-year-old World War II veteran who lives in Missoula, once worked as a firefighter in Chicago and saved three people from a burning house despite the danger of electrocution.

"We're just doing the best we can and we want to save lives," Scharfe said when asked how he feels when remembering the firefighters who died on 9/11.

"We're here to honor the 2,997 souls that died this day in New York City, Washington, D.C. and Shanksville, Pennsylvania," Reneau said. "And to honor all the first responders and military personnel that have died battling terrorism at home and abroad in those 20 years."

It was a day that will be seared into our memories forever.

Duncan's parents had to sign to approve his admission to the U.S. Navy in 1943 because he was only 17.

The public listens to speakers at the "Never Forget" event in Rose Memorial Park on Saturday to mark the 20th anniversary of the terrorist attacks of Sept. 11, 2001.

Retired Missoula firefighter Tom Zeigler reads the names of firefighters who died in the collapse of the World Trade Center towers with help from event organizer Susan Campbell Reneau.