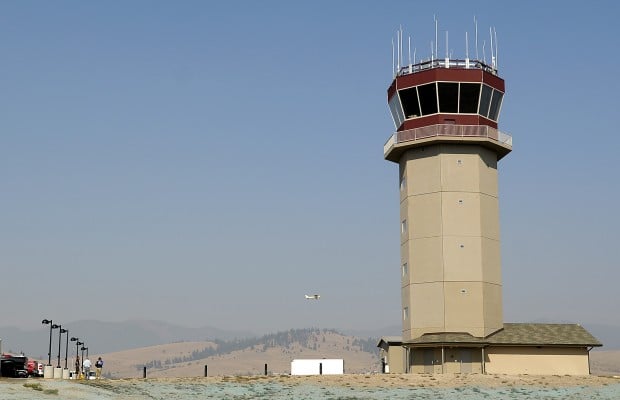 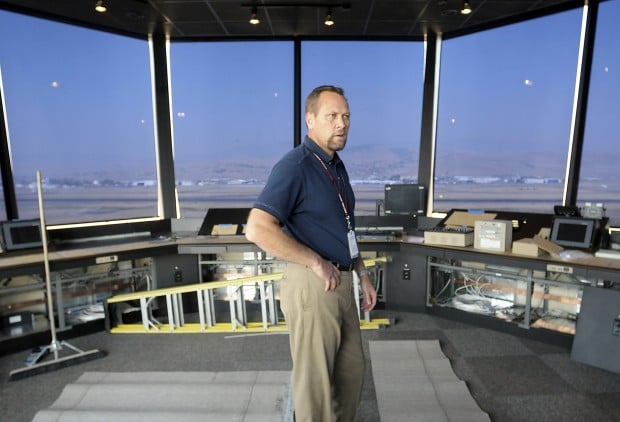 Airport director Cris Jensen talks about the tower project in the traffic controller’s cab on Tuesday. Unlike the old facility to the north of the runways, the new tower offers unobstructed views in all directions. 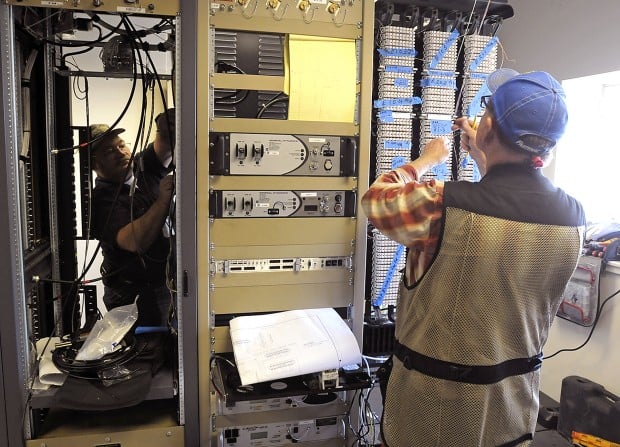 Airport director Cris Jensen talks about the tower project in the traffic controller’s cab on Tuesday. Unlike the old facility to the north of the runways, the new tower offers unobstructed views in all directions.

All those who’ve glimpsed the world from the existing air traffic control tower at the Missoula International Airport say “here.”

That’s a quiet crowd for a landmark that’s been in operation since Groundhog Day of 1962.

Beyond the free cake that’ll be offered, most of us will never get the chance again.

On Tuesday afternoon, there was bustle on all six floors of the 101-foot, $6.5 million tower. East, west, north and south, the view from the top also had a common denominator – the gray sea of smoke from all those wildland fires to the south and west.

Some day it’ll all dissipate, maybe (and maybe not) by Friday morning. There’s a better chance it’ll be clear by the Sunday morning of Sept. 30.

That’s when air traffic controllers will make the changeover, crossing the runways from the outdated 50-year-old control tower on the north side to their new digs on the south.

“It feels like it was about 20 minutes” ago when ground was broken for the new tower, airport director Cris Jensen said.

Instead, it was in May 2010, though actual construction of the tower itself didn’t begin until July 2011. At both junctures, the target date for completion was late summer of 2012.

“We kind of had in mind August and probably could have hit that mark, but we purposely pushed it back a little bit to September just to get through the peak travel season,” Jensen said.

Part of the conversation, too, was the fire season, he added. Surely by late September that would be winding down.

“That doesn’t look to be the case,” Jensen noted with a glance to the skies.

Otherwise it’s been a good project, executed well by a host of contractors headed by the design and construction teams from Morrison Maierle Inc. and William E. Payne and Associates.

It looks like they’ll bring it home a quarter million dollars under budget. The airport’s state-of-the-art operations center rises 1,100 yards to the southeast of the current tower, offering controllers unencumbered views in all directions.

As the 1954 airport grew around the 1962 tower, visual obstructions developed to the east and west. Jensen said the new location solves that problem. It also allows room for future runway expansions to the south of the new tower toward Mullan Road, although such development is a good 20 to 30 years down the road.

Workers from both the Federal Aviation Administration and the airport staff were busy up and down the tower Tuesday. Wiring and carpeting were in full swing in the traffic controller’s cab on top, lined in glass by 16 panes, each 9 feet high and 6 feet wide and weighing more than 500 pounds.

Identical stations for three traffic controllers facing north were fitted with radar display screens, wind instrumentation and lighting control systems. Only two of the stations are needed at any one time.

“Two will support our needs for the foreseeable future,” Jensen said.

Small spaces on the five floors below the cabin will house, from top to bottom, a coffee room and lounge, the office of tower chief officer Henry Barsotti, the FAA electronics system, the airport electronics system and, at ground level, mechanical equipment and a boiler system. The latter includes a separate boiler to heat the sidewalks outside, where employees will park.

That’s in lieu of a covered awning, which caused problems with radar reflection.

“We want to make sure we don’t have controllers slip and fall because they show up very early in the morning in the middle of the winter,” Jensen said.

In retrospect, solving such problems was the fun part.

Working out the funding and all the coordination involved began in 2001, long before Jensen and most others at the airport arrived on the scene.

“So it turns out that construction was just about the easiest part of the project,” he said.

A dedication and tour of the Missoula International Airport's new air traffic control tower will be Friday from 10 to 11 a.m. Food and drink will be provided. Turn south off West Broadway onto Whipoorwill Drive at the east end of the airport. Signs will direct traffic to the airport's RV storage parking, where shuttles will be waiting.

Smokey Bear taught a simple message: “Only you can prevent forest fires.”