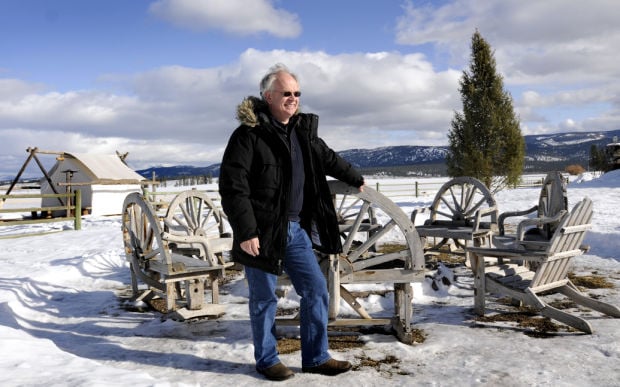 Stephen Beaumont, chief executive officer for the Resort at Paws Up since October, says the resort served twice as many people during the just-finished winter season and is preparing for an increase in summer business as well. “I think our reputation is getting greater,” he says. “We’ve done a good job marketing, especially on the domestic side. But interestingly enough, we had a lot of people from overseas this year.” 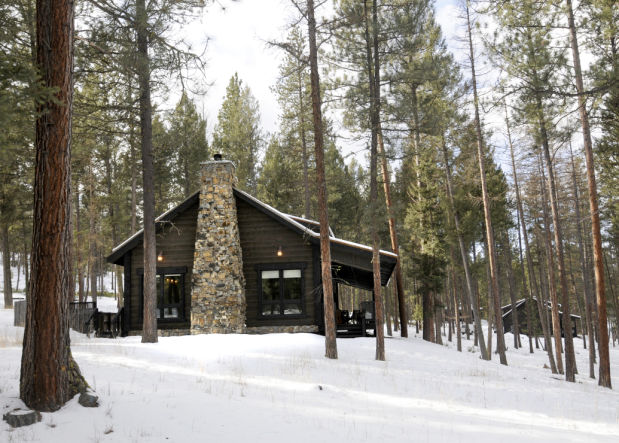 The resort features 28 homes offering private luxury set among the trees on the ranch. 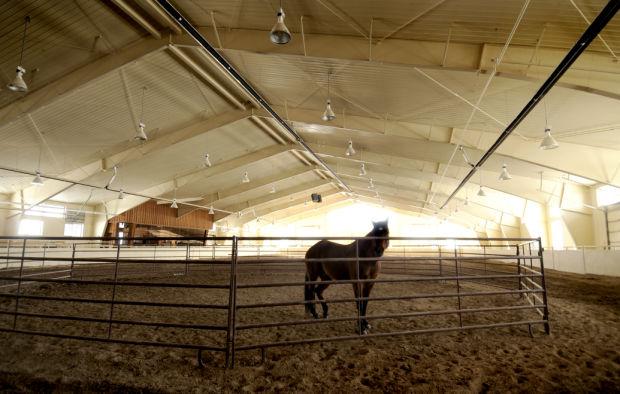 A lone horse stands in the resort’s arena Thursday that, in busier times, hosts a wide array of activities for guests. 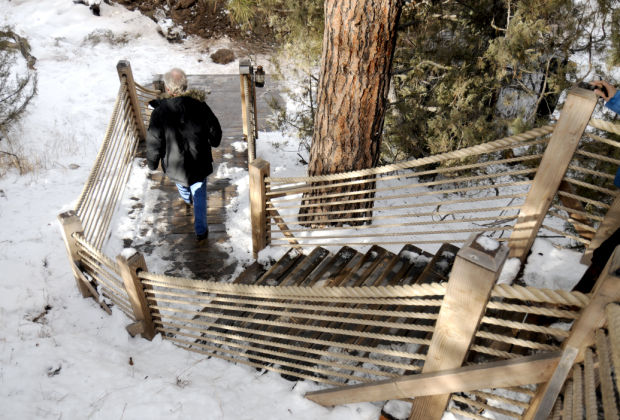 Beaumont descends the steps toward the “glamping” sites where, in season, guests can stay in tents that include heated floors, private bathrooms and full decks overlooking the Blackfoot River.

By JENNA CEDERBERG of the Missoulian

GREENOUGH – All the holiday guests were gone from the Resort at Paws Up on Thursday, when the 37,000-acre ranch sat blanketed in snow and sun.

The mild winter morning marked the end of a successful season at the resort. Twice as many guests as last year showed up to enjoy the holiday season in the Blackfoot Valley. About 130 guests filled the resort’s 28 homes, new resort Chief Executive Officer Stephen Beaumont said.

Guests included a host of kids, some of whom had never seen snow before. They ice-skated on a rink set among 138 trees across the grounds that were sparkling with Christmas lights. Snowmobiling butlers accompanied them on sledding trips.

“I couldn’t believe it, it started snowing at 7:30 p.m. on Christmas Eve. I was joking it was like we turned on a switch,” Beaumont said.

The last guests, a corporate group of 35 in town for a work getaway, left this week. The resort will be closed until April as dozens of upgrades and construction projects ready it for the busy summer season.

Paws Up is growing, with the busy winter season just one example of that growth, Beaumont said.

“I think our reputation is getting greater,” Beaumont said. “We’ve done a good job marketing, especially on the domestic side. But interestingly enough, we had a lot of people from overseas this year.”

Guests have embraced what Beaumont calls the “authentic” experience offered at the resort, which houses up to 60 horses during peak season and includes 10 miles of riverfront property.

The resort is expanding its glamorous camping, or “glamping.” It has added the Cliffside Camp that will house six expansive canvas tents with full decks, private bathrooms with heated floors and mobile air conditioners overlooking the confluence of the Blackfoot River and Elk Creek.

With the Cliffside addition, the resort will have six glamping sites. Most sites sit next to the Blackfoot River and include six tents and a dining pavilion.

“Glamping” was revolutionary at Paws Up and has become the resort’s signature offering. Its popularity has led to increased awareness of the resort’s other amenities, Beaumont said.

“It’s undoubtedly been key to our success,” he said.

Staying at Paws Up isn’t an experience that comes cheap. Rates online show one-room glamping tents go for just over $1,000 a night in the summer. The largest “Wilderness Estates” list a nightly summer rate of $2,775.

Paws Up attracts visitors from Southern California and New York, people who are used to staying in the most exclusive resorts, Beaumont said.

It’s relativity easy to honor even celebrity guests’ wishes to remain anonymous, as the visitors tend to disappear during the day, spreading out among the acres on horseback rides, fly-fishing expeditions or cattle drives, Beaumont said.

Paws Up boasts one of the largest activity menus of resorts worldwide. The equestrian arena thrills guests – who can enjoy the show from an enclosed box with leather seats and a fully stocked bar – with rodeo and shooting shows.

“We can do pretty much whatever people want,” Beaumont said from inside the arena Thursday morning. “People want something different.”

Beaumont wants to keep expanding the options. He wants to add a photography element to some activities this summer and increase the offerings of less rigorous outdoor activities.

Paws Up has been owned since 2004 by Las Vegas businessman David Lipson, who lives part time on a home just beyond the resort’s two restaurants. He’s actively involved in the business, but Beaumont sees his role as helping transition the young resort from a family-run business to a full-blown luxury operation.

Beaumont is working during the off-season to streamline operations through business plan redesigns and supervising the upgrades.

He has long worked in the resort industry. Most recently, he was running a resort on the British Virgin Islands.

A chance trip with his wife through Montana years earlier got Beaumont, who is originally from the United Kingdom, thinking he might want to live here. Paws Up is a place he sees himself staying for a while.

“I count my blessings every day,” Beaumont said as he wound around the resort’s roads leading to the secluded homes that each sit on four acres and include a guest car. “The guests see that awe and wonder. Many arrive late in the evening or afternoon. They wake up to amazing views.”

Also on Beaumont’s to-do list is to reach out to the local community. He wants them to try the restaurants and take advantage of special resident rates.

Lipson received heavy criticism from residents here in 2002 when he tried to gain exclusive rights to the “Last Best Place” phrase for Paws Up. Montana’s congressional delegation has since prevented exclusive use of the phrase by including it in appropriations bills that would prohibit the U.S. Department of Commerce from spending any money to approve such a trademark.

Lipson’s company came close to losing its cattle and horse facilities last January after the ranch’s owners and its construction firm settled a potential $2.1 million lien.

“From my perspective, I’d like to draw a line in the sand and put that in the past,” Beaumont said. “We’re here, we’re growing and we’re continuing to make an impact and putting Montana on the map for people who might never have come here.”

The seasonal staff at Paws Up is made up of local residents.

Beaumont also is looking to shake things up in the hiring department by inviting a new demographic to learn about its seasonal work opportunities. Paws Up has a full-time staff of 35 and hires as many as 130 seasonal workers.

So Beaumont is hosting a job fair Saturday geared toward recruiting “active retirees” to come work at the resort.

Beaumont thinks it’s a demographic of people with much life experience, flexible schedules and a willingness to stick around.

“I’m very interested in getting people we can have back year after year. It’s great to have that as a core,” Beaumont said.

The job fair will run from 10 a.m. to 2 p.m. Saturday in the resort’s Bull Barn. It will allow both potential employees and Paws Up management to ask questions. Jobs include being camp butlers who look after guests at the glamping sites.

“I’m all about attitude,” Beaumont said. “You can teach the technical skills, you can’t teach the inherent people skills.”

The staff’s reputation at Paws Up is one of the reasons guests love coming back, Beaumont said. He wants to find more of the right, “authentic” people to give guests the best experience possible.

“I’ve actively recruited them in the past,” Beaumont said of the active retirees. “I just have this gut feeling the right people are out there.”

HELENA — Sen. Max Baucus says the U.S. Patent and Trademark Office has agreed to permanently deny any trademark application for the phrase "La…

Stephen Beaumont, chief executive officer for the Resort at Paws Up since October, says the resort served twice as many people during the just-finished winter season and is preparing for an increase in summer business as well. “I think our reputation is getting greater,” he says. “We’ve done a good job marketing, especially on the domestic side. But interestingly enough, we had a lot of people from overseas this year.”

The resort features 28 homes offering private luxury set among the trees on the ranch.

A lone horse stands in the resort’s arena Thursday that, in busier times, hosts a wide array of activities for guests.

Beaumont descends the steps toward the “glamping” sites where, in season, guests can stay in tents that include heated floors, private bathrooms and full decks overlooking the Blackfoot River.