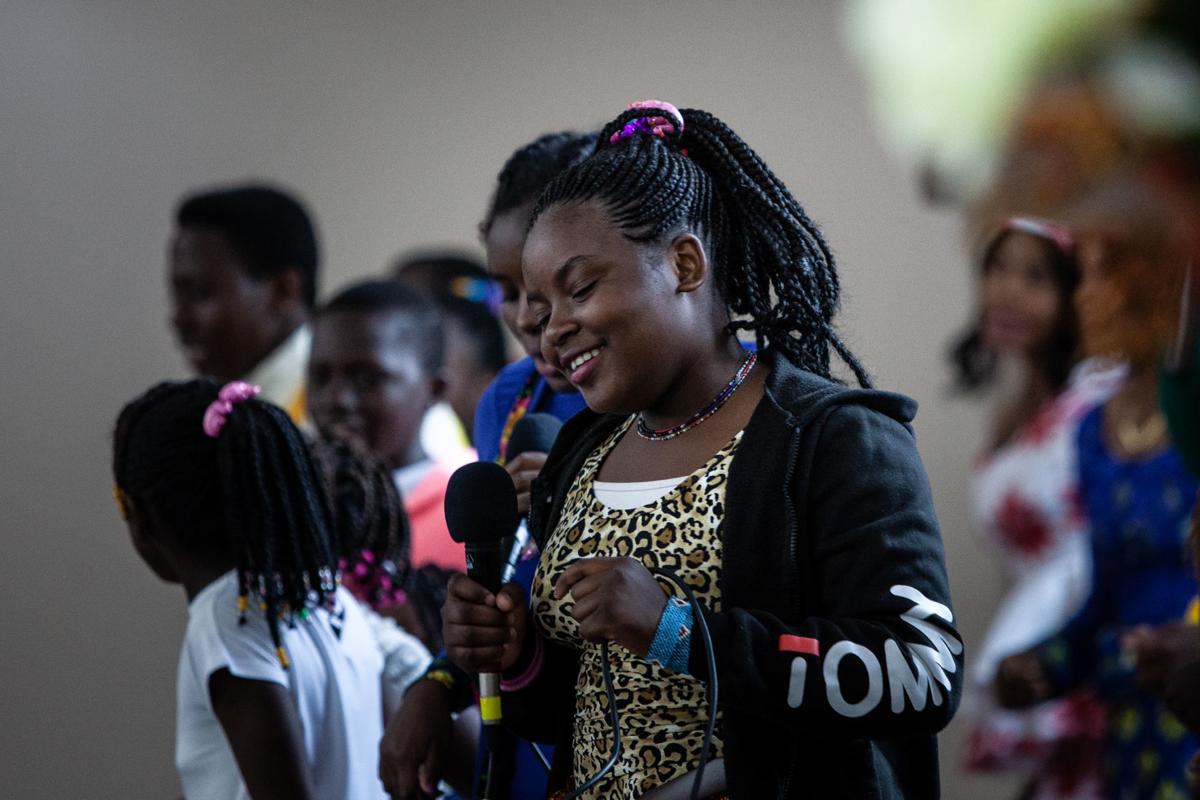 Universal Revival Church member Amissa Albert leads a traditional song and dance with a large section of the congregation in celebration of the grand opening. 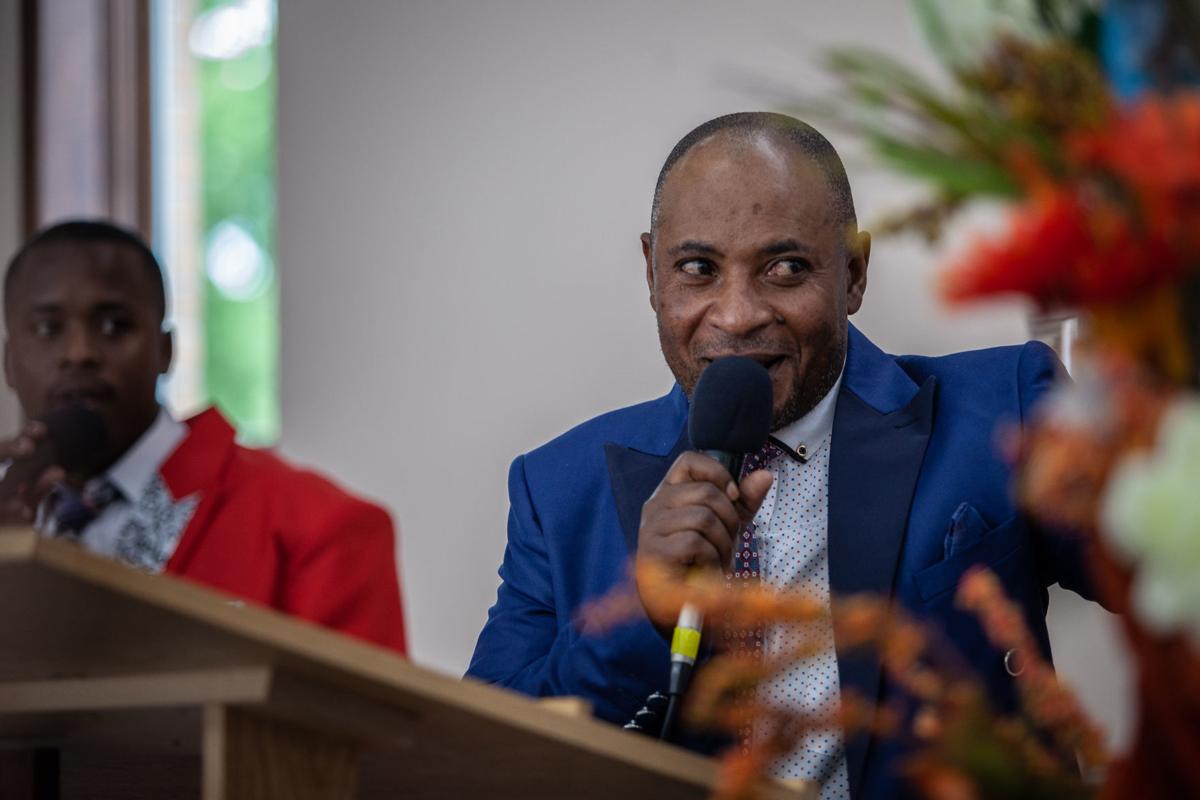 Universal Revival Church co-leader and Pastor Joel Kambale thanks those who helped bring the congregation together during his brief speech at the church's grand opening on Sunday afternoon. The congregation was created by the Congolese Refugee community and local church leaders. 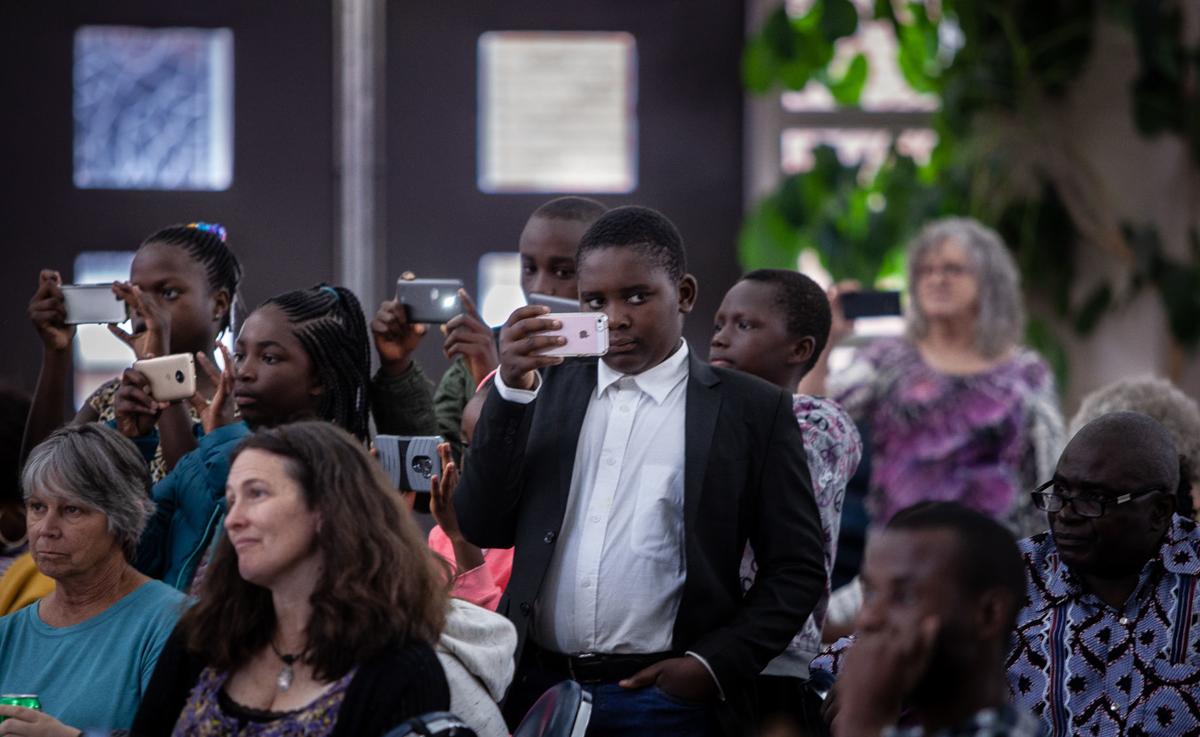 Young congregation members record the ceremony on their cellphones. 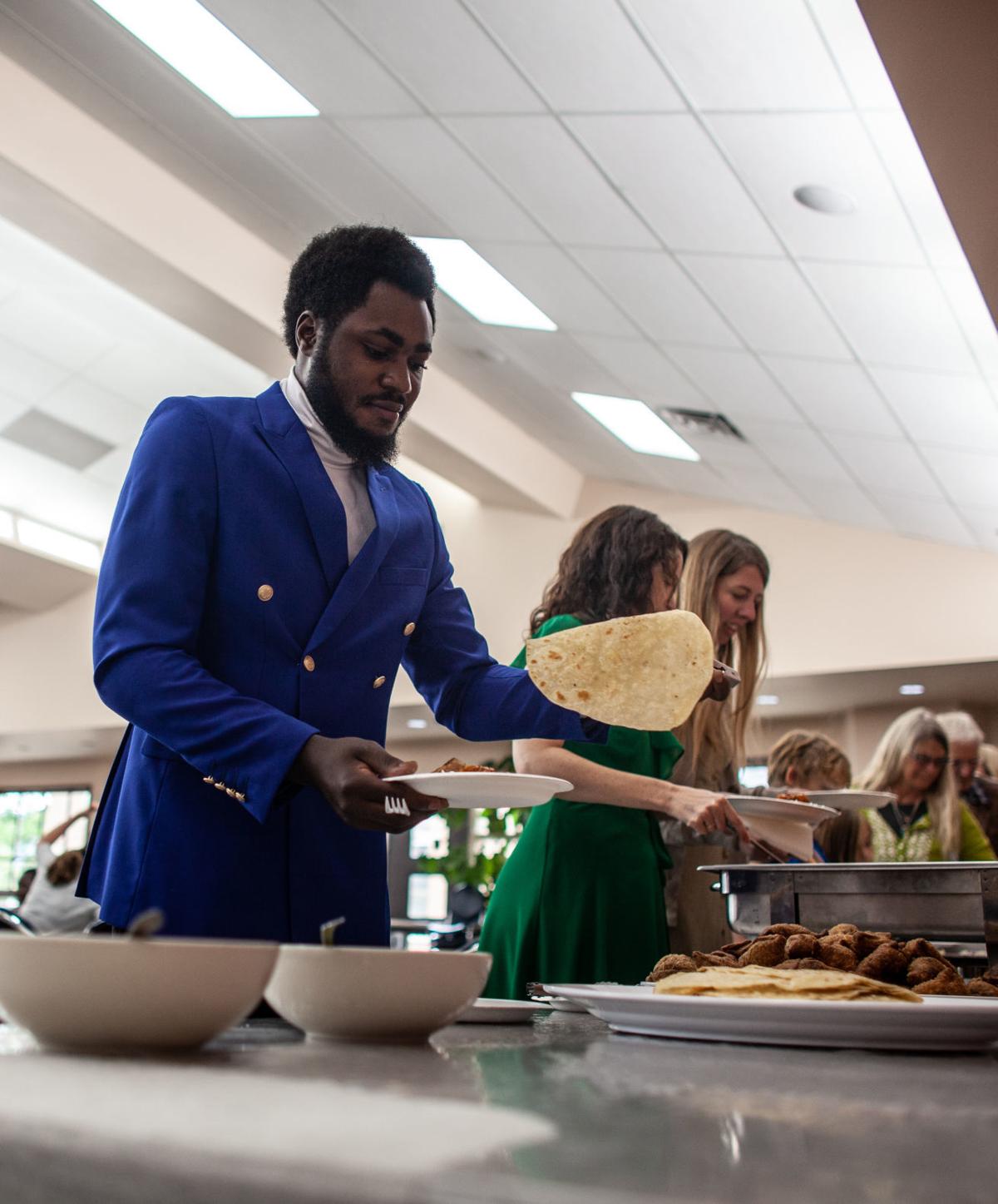 Universal Revival Church member Luc Mungondozi works his way through the food line at the celebration. The food included traditional Congolese dishes as well as catering from Masala. 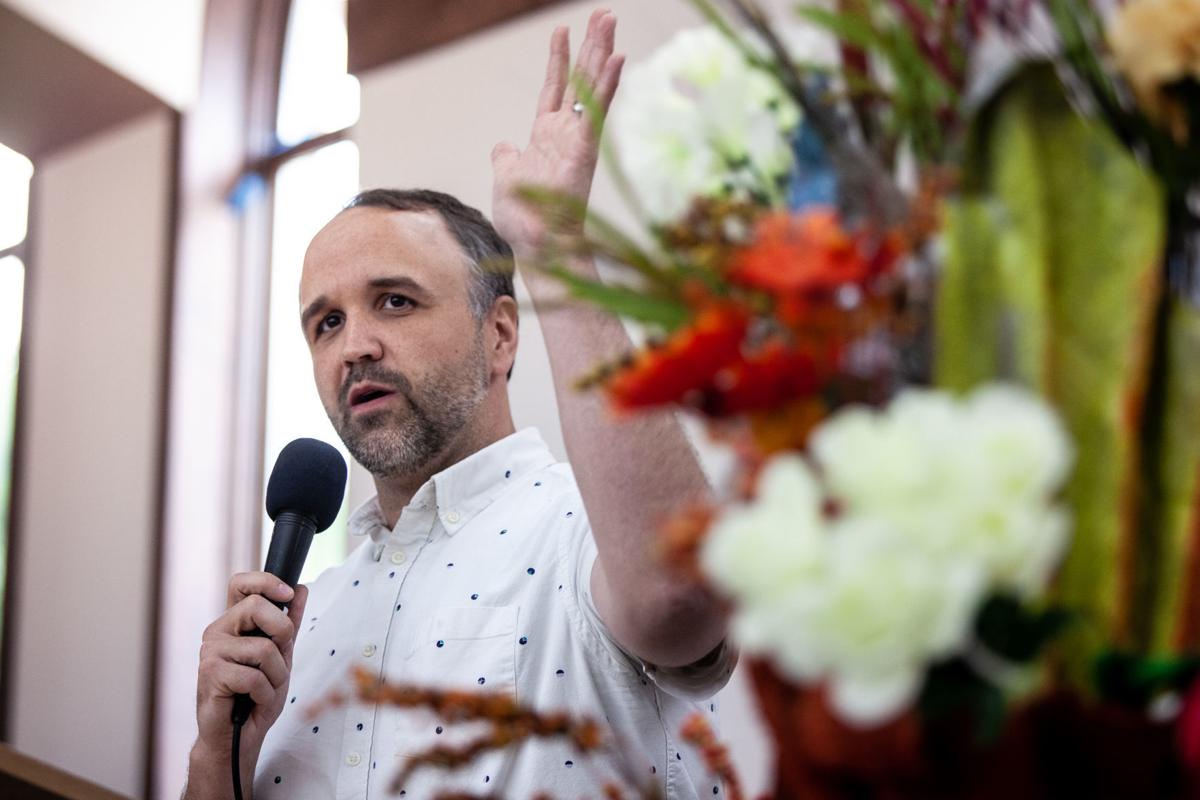 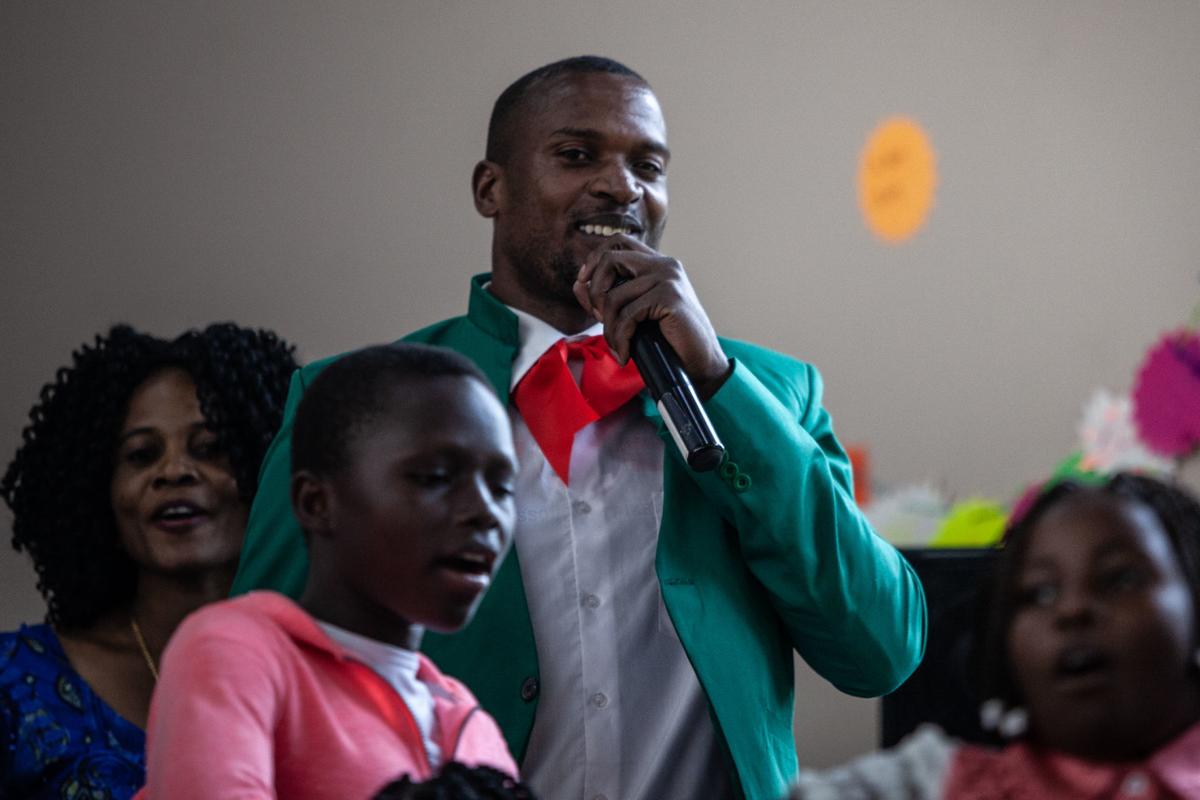 Families, friends and neighbors conversed in English and Swahili as they listened to live music, filled plates with traditional Congolese dishes and watched children run around the room at the First Presbyterian Church on Sunday.

Although the gathering took place in a building owned by First Presbyterian Church, the event itself was the celebration of a new congregation called the Universal Revival Church, which was formed by Congolese refugees who now call Missoula their home.

Gilbert Hategeka and Joel Kambale were two of the first refugees who, along with their families, came to Missoula from Congo with the help of the International Rescue Committee.

The two started the congregation in January after realizing the language barrier for refugees who couldn't read or speak English was preventing them from understanding services at other churches.

They organized services in Swahili, which they hold every Sunday from 1 to 3 p.m. at the Public House in downtown Missoula. At the services, people dance, clap, sing and celebrate, much like they did on Sunday as they celebrated their new congregation and officiated Hategeka and Kambale as its pastors.

"The importance of this church is to bring us together so we're keeping our culture together, our traditions together," Hategeka said.

Hategeka said he and Kambale sat down to talk about the idea to form a congregation with the other refugees to make sure it was something the community wanted. They also went to Mayor John Engen to ask for his blessing.

Much like its name, the Universal Revival Church revives Congolese culture and traditions while welcoming people from all faiths and backgrounds.

"It's for everyone," Hategeka said. "We're not segregating. If you want to come to our church, you're welcome. Everyone is welcome here."

The event Sunday celebrated the steps that Universal Revival Church is taking to become a formal congregation, such as becoming a nonprofit so they can accept donations to support church functions, as well as the refugee community.

"I feel very happy," Kambale said. "I've been praying for this day for a long time."

Kambale and Hategeka both said they couldn't have formed the congregation without support from the Missoula community, and especially the support of local church leaders and Casey Dunning, executive director of the Missoula Interfaith Collaborative.

Dunning has been helping on the legal end to get the Universal Revival Church registered as a nonprofit. He also connected Kambale and Hategeka to other pastors in the area, and New Hope Christian Fellowship, a Pentecostal church in Missoula that Dunning said parallels Congolese traditions in some ways.

Kambale said he thinks the new church is helping the Congolese refugees preserve their culture and unite as a community.

"We're telling them to be united, to come together and work together so we can do many things because now, we are Missoulians," Kambale said. "...But when we're starting a life here, we don't want to forget about (our) spiritual life because that's really important. We can get jobs here, homes here, whatever, but we shouldn't forget about spiritual life."

Jen Barile, the resettlement director with the International Rescue Committee’s office in Missoula, said she was happy to see both familiar and unfamiliar faces at the celebration Sunday, which included refugees, members of local faith communities, people who have served as mentors to refugee families, and Soft Landing and IRC staff.

"It's exciting to see people that I don't recognize," Barile said. "They may be friends or neighbors of the Congolese."

Barile said she's thrilled the Congolese have felt embraced by the community and were comfortable enough to pursue the steps to form a congregation.

"We're just so proud of the Congolese that we resettled three years ago," Barile said. "Now, three years later, they have their own congregation. It shows all of the support from the Missoula community because they couldn't have done it without us."

Aaron Koepke, a pastor at New Hope Church and one of several speakers at the event, said that although there are many differences between the two communities, they are united and become part of the same family through their faith.

"So what do we do when family comes to our home?" Koepke said. "We welcome them in, we honor them. That is why we are here this afternoon."

For the third year running, the International Rescue Committee will celebrate with the refugees it has welcomed to Missoula with music, food a…

U.S. refugee resettlement agencies are lashing out at news the Trump administration is considering another drastic cut to refugee admissions.

Universal Revival Church member Amissa Albert leads a traditional song and dance with a large section of the congregation in celebration of the grand opening.

Universal Revival Church co-leader and Pastor Joel Kambale thanks those who helped bring the congregation together during his brief speech at the church's grand opening on Sunday afternoon. The congregation was created by the Congolese Refugee community and local church leaders.

Young congregation members record the ceremony on their cellphones.

Universal Revival Church member Luc Mungondozi works his way through the food line at the celebration. The food included traditional Congolese dishes as well as catering from Masala.