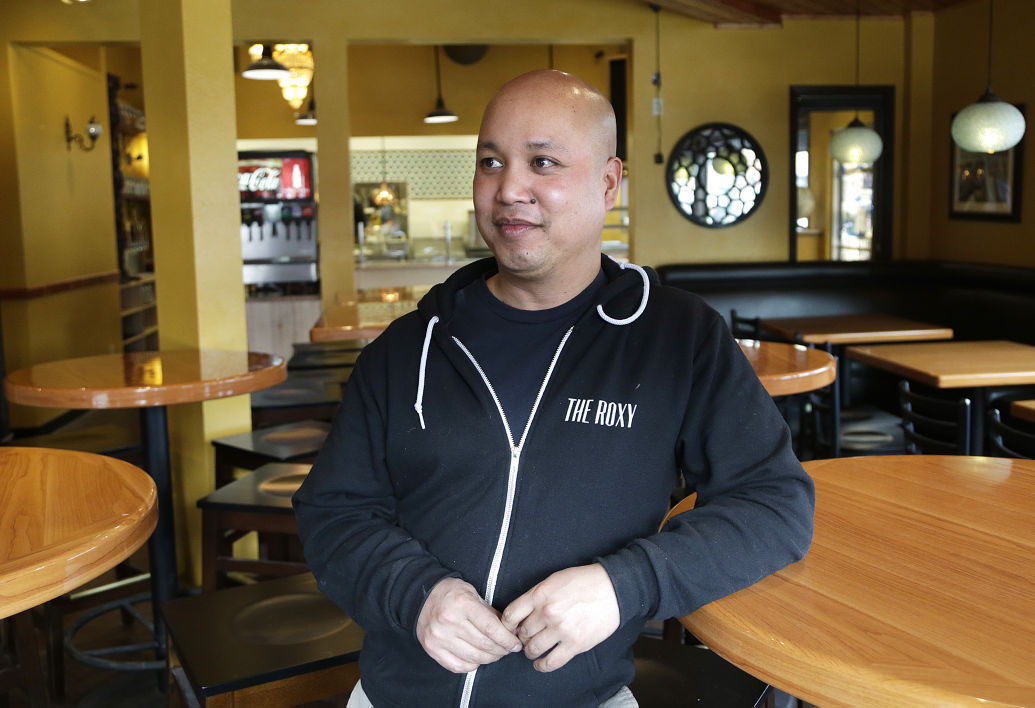 Theo Smith stands in the main dining area of his new restaurant, Masala, at 206 W. Main St. on Friday. The restaurant officially opens Monday at 10 a.m. but will have a late-night “to go” window open Saturday. 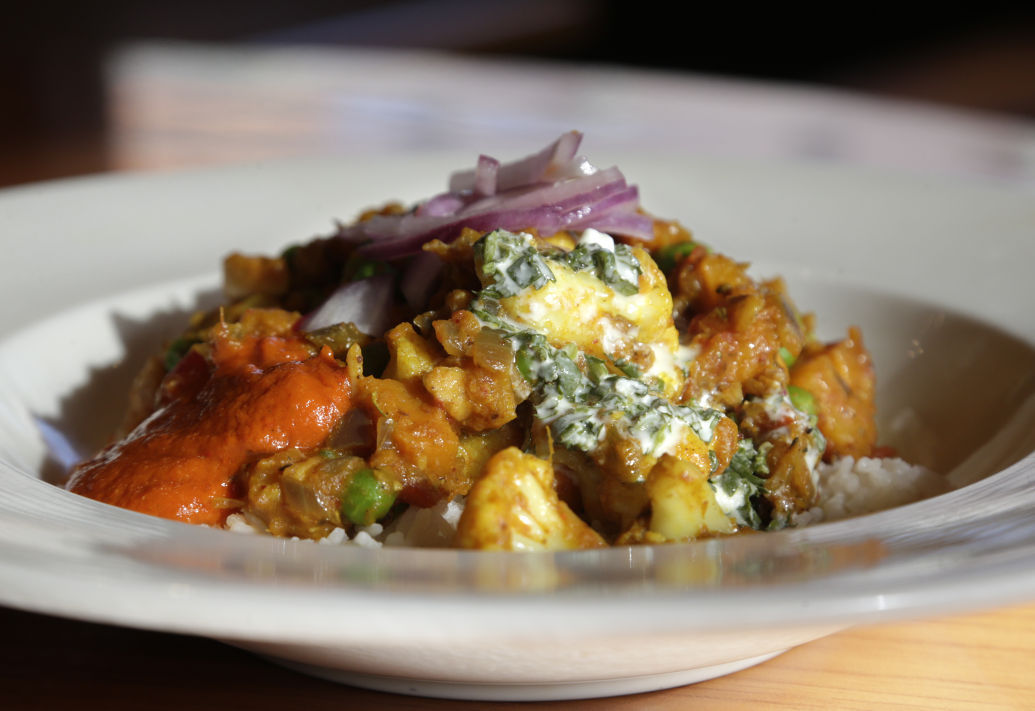 Smith began serving Indian food out of his popular Masala food cart. Now that Smith is opening the restaurant, he can serve up to eight curries at a time instead of just three. 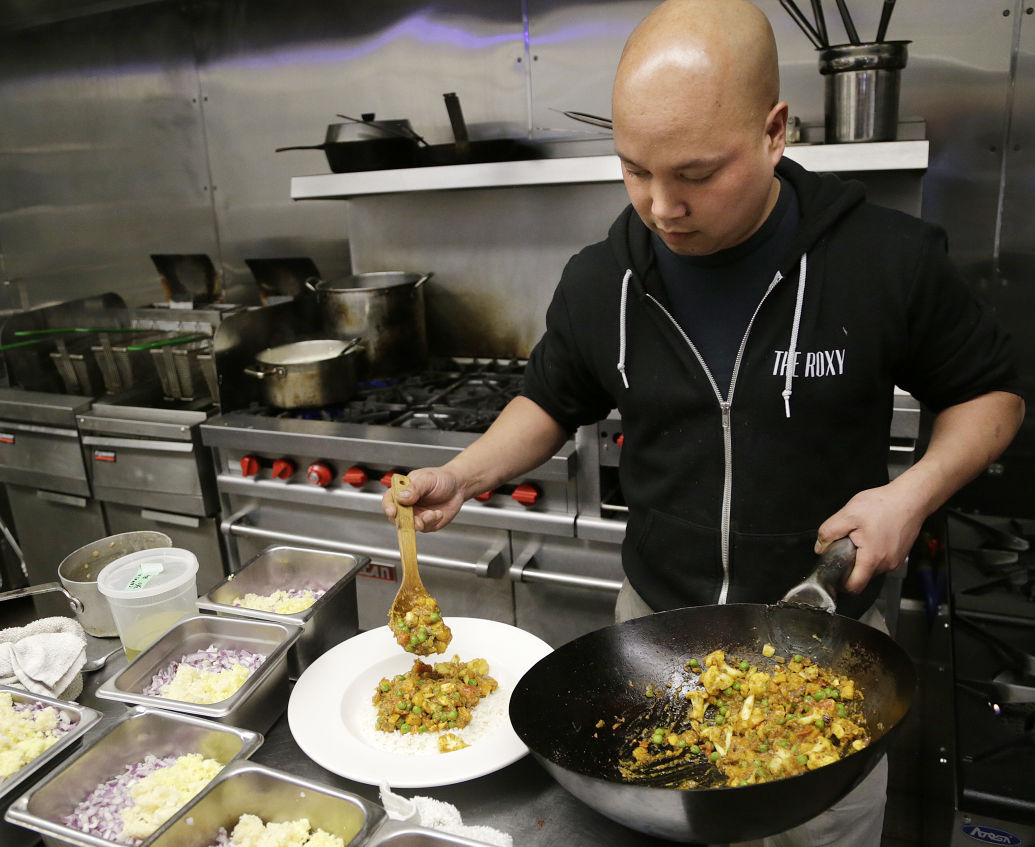 Smith plates one of several curry dishes that Masala will offer starting Monday.

The long-anticipated opening of the Masala restaurant in downtown Missoula is finally here, and those who crave Indian cuisine will find a more extensive and creative menu than at the popular food cart of the same name.

Owner and chef Theo Smith and his crew have been busy remodeling the downtown space at 206 W. Main St. – previously the Walking Moustache. They will start Saturday with a late-night “to go” window from 10 p.m. until 2 a.m. They’ll be serving up a Canadian/Indian experiment of poutine curry – french fries topped with a choice of butter chicken or vegetarian matar paneer (peas and paneer cheese in a tomato curry).

The restaurant will then open its doors for regular service starting Monday. It will be open 11 a.m. until 11 p.m. weekdays and Saturdays, and closed Sundays. But the hours could change in the near future with a brunch service. The late-night window will be available Fridays and Saturdays.

Smith said he is applying for a beer and wine license, and he hopes to begin offering brunch items like shakshuka, an egg dish with a tomato and spice sauce, in the coming months.

“We want to learn to walk before we run, so brunch is on a hiatus right now, but it will be a month away,” Smith said.

He also plans to have fine-dining options in the future, but for now the restaurant will mainly offer fast-casual service with a steam table and a cold case. Smith had a tandoor oven installed for naan bread, and he hired a pastry chef for dessert items.

“We just got the green light to open, so we just finished all our inspections yesterday,” Smith said Friday.

The interior features a projector and a large screen, where Smith will show Bollywood movies to spice things up. He also has opened two other restaurants, including Iza, an Asian establishment on the Hip Strip.

“I’m glad I have that kind of experience now going into another project like this,” he said. “There’s no substitute really for that. I’m really excited for this, of course.”

Smith said he’s a fan of food from a variety of regions in India, but he is especially keen on southern Indian cooking styles.

“It’s a huge country. You have the world’s tallest mountains and glaciers in the north, and it’s tropical in the south,” he said. “And the food reflects that diversity. But I really like southern Indian food, and I don’t think people in Missoula are really familiar with it.”

Smith is especially proud of a dish he’s created consisting of baked cod with a spice paste in a banana leaf.

He said regular Masala food-cart customers will be familiar with the restaurant's curries, except now there are eight different types instead of three.

“Everything else will be new to people,” he said. “Our cold case will have a variety of salads and then we have a hot deli case. And one of the most exciting things is we have a great tandoor oven that we’re figuring out how to use. So we’ll have tandoori chicken and skewers of meat, that kind of thing. Nothing is made to order as a fast-casual concept. We’re just expecting to hopefully do a lot of lunch business.”

The restaurant sources its meats and produce from local ranchers and farmers, and Smith said he buys whole animals – he’s an expert butcher – so he’s going to be able to make his own broth.

He has been testing his menu for the past few months with the help of friends, but he is still fine-tuning everything.

“I hope to have the menu done by Sunday,” he said. “People are surprised that that’s the last thing we do.”

The crew has had fun coming up with the new menu. For example, Smith is excited about his matar paneer.

“It’s my kind of litmus test for Indian restaurants when I visit them,” he said. “It’s one of my favorites, and also it’s a good barometer for if I should try their other dishes.”

Smith moved to Missoula from Seattle years ago, and one of the first things he noticed was a lack of ethnic-food options. He was a chef, but he eventually decided to open his own restaurant. His curries at Iza were popular, so he decided to offer Indian food through a mobile cart.

“I knew I didn’t want to open another pizza place or a burger joint or a burrito place,” he said. “I wanted to open something that hadn’t existed that would change the eating options available.”

He said that unlike in Seattle, other restaurant owners in Missoula have been extremely supportive and helpful to him.

“I have a great relationship with Biga Pizza, the Top Hat and the Pearl and a lot of restaurant owners in this town,” he said. “You want to get off on a good foot with them and hopefully have them welcome you into the neighborhood. That’s the beautiful thing here. It’s not the case in Seattle. It’s cutthroat there. You are vying for customers and space. But Missoula has been really amazing."

While the headlines about Nepal’s earthquake have faded, the nation’s Missoula friends say its challenges have grown more dire.

A new Panda Express restaurant is planned for 3712 N. Reserve St., in front of the Hilton Garden Inn at the intersection with Expressway.

There are three new restaurants opening on the 4000 block of North Reserve Street, which will cumulatively provide roughly 250 new part-time j…

“I want to do the same things I would be doing if I was in the old country,” explained Bayern Brewing CEO Jurgen Knoller about his newest busi…

Theo Smith stands in the main dining area of his new restaurant, Masala, at 206 W. Main St. on Friday. The restaurant officially opens Monday at 10 a.m. but will have a late-night “to go” window open Saturday.

Smith began serving Indian food out of his popular Masala food cart. Now that Smith is opening the restaurant, he can serve up to eight curries at a time instead of just three.

Smith plates one of several curry dishes that Masala will offer starting Monday.