The Montana Department of Justice released its 2021 Missing Indigenous Persons report, which revealed an uptick in cases.

According to the report, in 2021, Montana law enforcement entered 2,114 missing person cases into the FBI’s National Crime Information Center database. Of those, 650, or 30.7%, were identified as Indigenous.

In the Department of Justice’s (DOJ) 2017-2019 report, Indigenous people accounted for, on average, 26% of missing persons cases in Montana, though they comprise about 6.7% of the state's population.

What’s in the report?

The DOJ report revealed that of the missing Indigenous people in Montana in 2021, 67% were women and 33% were men. Toole said on a daily basis, those numbers are closer to 50-50.

Of the missing Indigenous people in Montana in 2021, more than 80% were under the age of 18. Toole said this number is consistent with all missing persons in Montana, meaning that non-Native people under 18 also go missing at higher rates than any other age.

“We have a real problem in Montana with youth being reported missing,” she said.

Of the 650 missing Indigenous persons entries in 2021, 457 were unique. That means that 193 missing persons cases concerned people who were reported missing at least twice.

Toole said a number of factors contribute to a person being reported missing more than once.

“Someone who’s got a lot of stressors in their life or perhaps is unsafe or in very stressful situations repeatedly, may try to leave and get reported missing,” she said. “Then, they’re found, but the patterns in their lives don’t change, so they leave again.”

The report revealed that 229 missing Indigenous people were located the same day their disappearance was reported, and 167 were found within one or two days of being reported missing.

The report also showed a slight increase in missing Indigenous persons cases during the summer months, when the weather gets warmer and students are out of school.

Of the various state and tribal law enforcement entities that handle these cases, the Billings Police Department saw the highest number of missing persons cases in 2021 with 119.

Toole said she thinks the Billings Police handle a greater amount of cases because they are located near two reservations — the Crow and Northern Cheyenne — and because many Native people also live in communities neighboring the reservations.

“All these folks go to Billings for major services, like shopping, medical care, school, etc.,” she said. “It makes sense they have more reports because of all those factors.”

Comprehensive national data on the missing Indigenous persons epidemic is limited, and Montana is one of a few states to collect and analyze numbers.

A 2021 Government Accountability Office report found the total number of missing or murdered Indigenous women is unknown “because federal databases do not contain comprehensive national data.” It also revealed that federal entities, including the Department of Justice and Department of the Interior, have failed to meet required deadlines.

Toole said when it comes to Montana data collection, missing Indigenous persons reports can be filed with a number of law enforcement agencies — including state, tribal and federal entities.

“There’s no statewide, centralized place all the reports go,” she said. “That’s why legislation that requires all entities to enter those reports into the National Crime Information Center is so important.”

The National Crime Information Center (NCIC) is a federal database that helps users manage and resolve cases. The Montana Legislature in 2019 passed House Bill 54, which requires all missing person reports to be entered into the database within two hours for a person under the age of 21 and within eight hours for a person older than 21.

Toole said data is critical not only in understanding the scope of the problem but also in identifying effective solutions.

“In order to make relevant and effective public policy decisions and allocate any resources or funding to the problem, our policy and lawmakers need accurate information about the problem,” she said. “If we only know part of the story, we may make assumptions about the causes, reasons for and impact of the problem. Data helps us know the full story.”

The Montana Missing Indigenous Persons Task Force, which was created in 2019 with the passage of the Looping in Native Communities Act, reviewed and approved the DOJ’s report. The task force plans to use it to inform their future discussions and decisions.

Nora Mabie is the Indigenous Communities reporter for Lee Montana.

The petition specifically condemns “high rates of drug and alcohol abuse” and notes a lack of substance use and mental health treatment programs on the reservation.

‘Lucky I even made it’: Native Americans face barriers accessing lifesaving maternal care

Officials and advocates say the cases are unique and don’t appear to be related.

Indigenous people, groups and leaders are showing mixed reactions to Pope Francis’ apology, and many are calling for action and accountability.

Survivors in attack on family released from Montana hospital

Two sisters-in-law have been released from the hospital after suffering critical injuries during a brutal attack near Glacier National Park in which two members of their family were shot and killed.

‘We have to be visible': Medicine Wheel Ride takes MMIW to Sturgis

"We love motorcycles, too. We want to make sure our women are safe, our communities are safe, and that the Indigenous people who live here are acknowledged.” 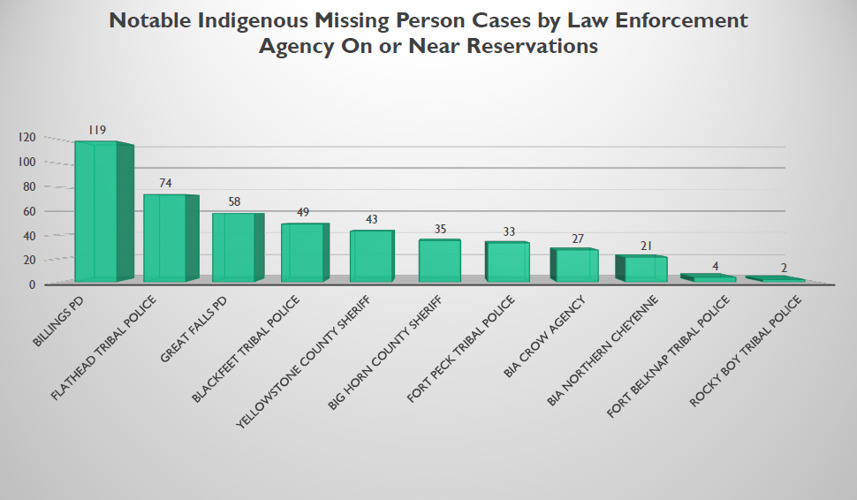 This graph shows the number of missing Indigenous persons cases handled by various law enforcement agencies. It is from a 2021 Montana DOJ report. 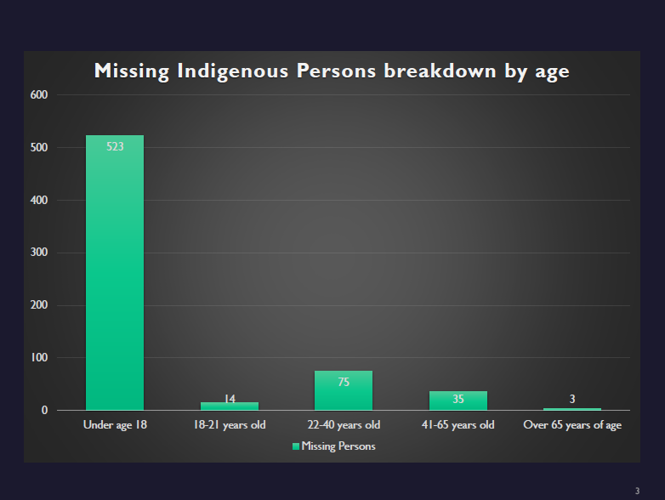 More than 80% of the missing Indigenous persons cases in 2021 were those under the age of 18. 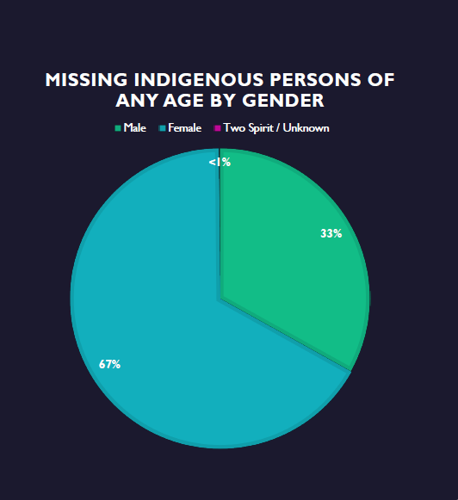 Of the missing Indigenous persons cases in Montana in 2021, 67% were women. 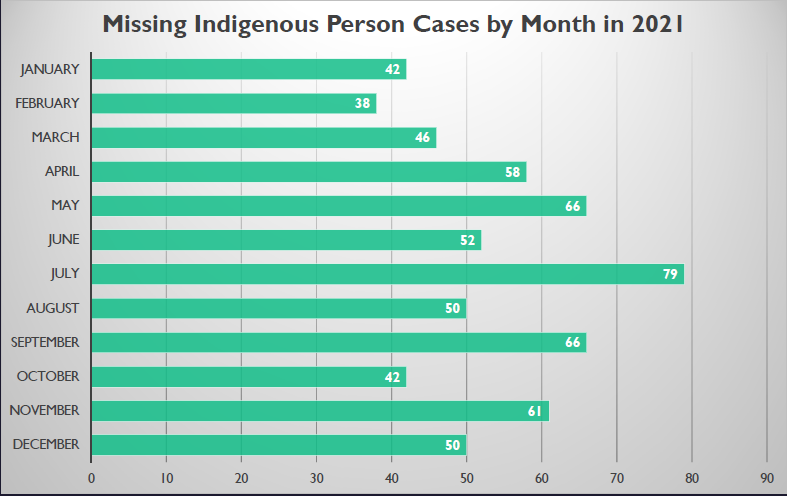 This graphic shows the missing Indigenous persons cases in Montana by month. Typically there is an uptick in numbers during the summer, when the weather warms and children are out of school. 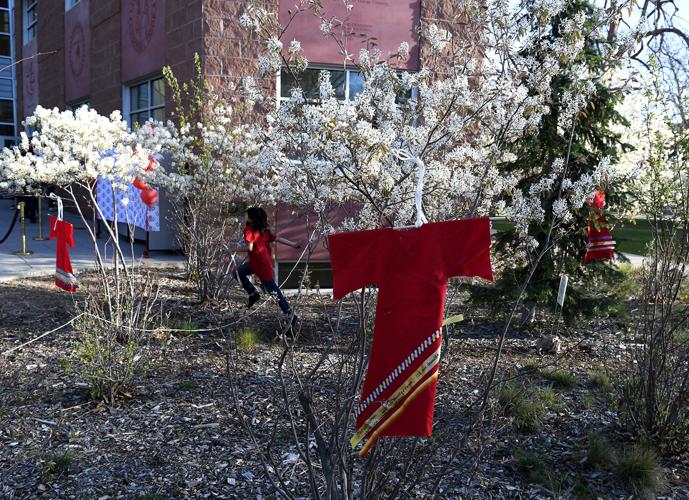