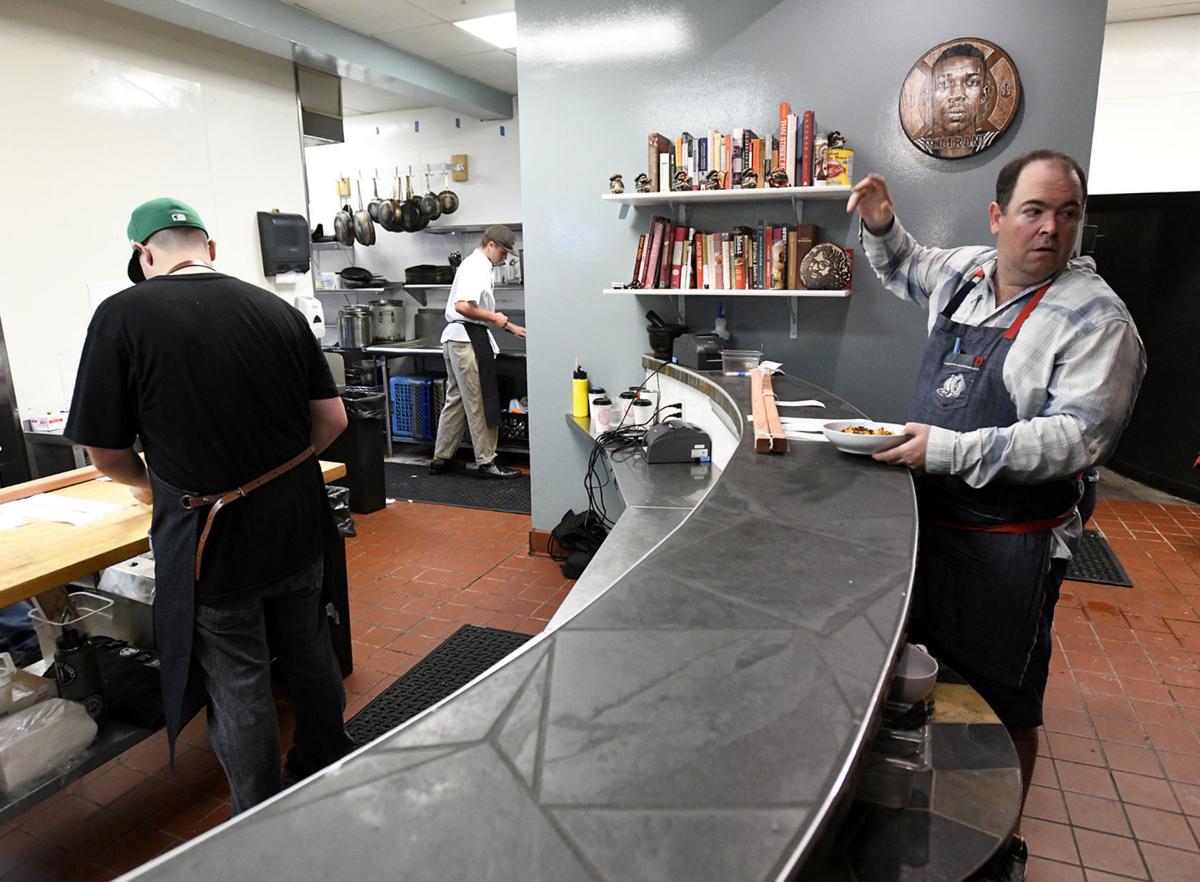 Matt "Raz" Schneider, right, and head chef Tom Standridge get plates ready as they train staff on Tuesday for their new Second Set Bistro, located in the Florence Building in Missoula. The new restaurant includes ingredients made from scratch and dishes plated to be shared. 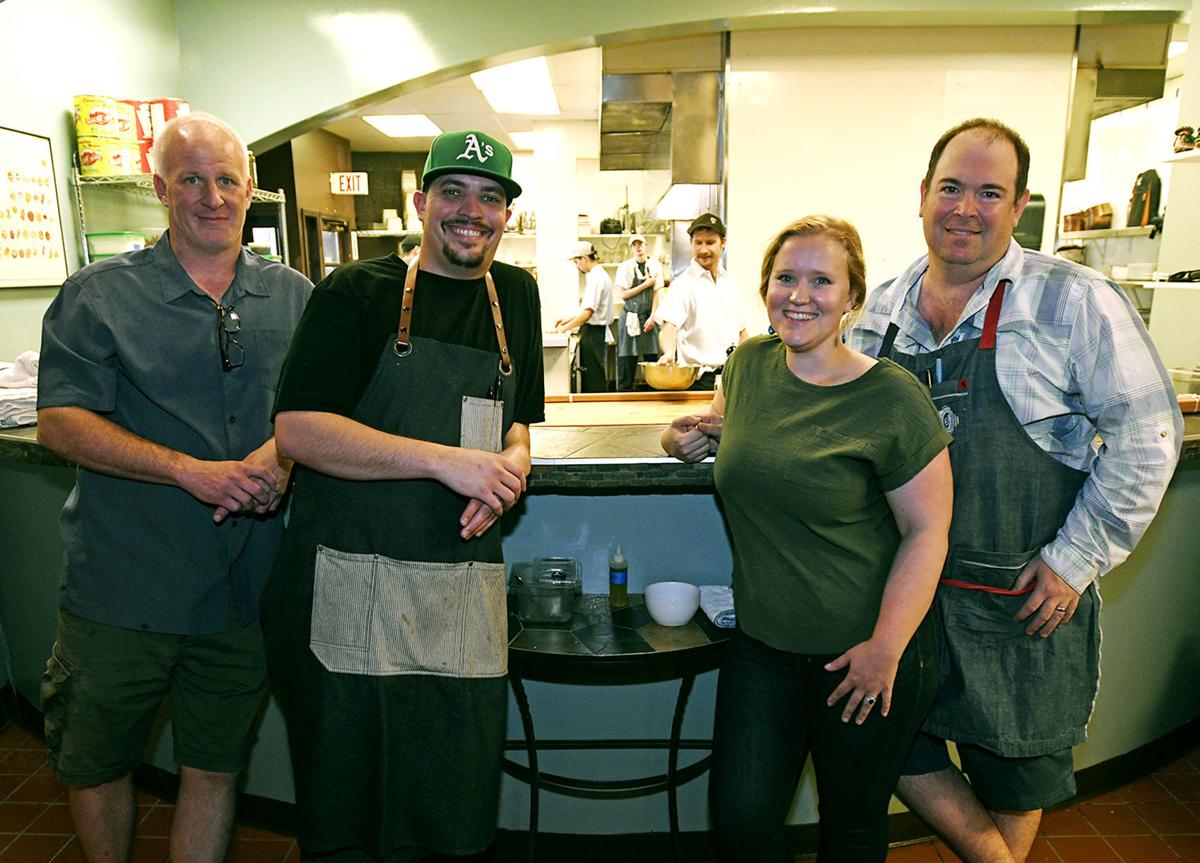 The ownership and management of Second Set Bistro is Josh Snider, Tom Standridge, Maddie Schneider and Raz Schneider, from left.

Matt "Raz" Schneider, right, and head chef Tom Standridge get plates ready as they train staff on Tuesday for their new Second Set Bistro, located in the Florence Building in Missoula. The new restaurant includes ingredients made from scratch and dishes plated to be shared.

The ownership and management of Second Set Bistro is Josh Snider, Tom Standridge, Maddie Schneider and Raz Schneider, from left.

The new restaurant, located in the old Red Bird spot inside the historic Florence Building on Higgins Avenue, is set to open August 8, and the staff is busy training as the final remodeling touches are finished.

The ownership and management team consists of Matt “Raz” Schneider, his wife, Maddie Schneider, along with Josh Snider and head chef Tom Standridge.

“We think Missoula’s going to really appreciate this restaurant and what we can bring to the community,” Raz Schneider said. “We’re excited to be in this building. It’s going to add another sort of feature for this spot.”

Josh Snider, who grew up with Raz in California before they both moved to Montana in the '90s, was once the head caterer for the San Jose Sharks hockey team. He said the menu at Second Set will be nothing like Missoulians have seen yet.

“We like to play with big flavors here,” he explained. “I think Missoula’s ready for some big flavors. That’s our opinion. We want some wow factor. We’ve got some experience. I hired Tom when he was 15 at a restaurant in California.“

The menu features creative dishes like roasted cauliflower with schmaltz (house-made rendered chicken fat), garlic, mint and Calabrian chili. There’ll be Cuban sandwiches, pasta, steak and a fish of the day, all done with a creative twist. The ribeye, for example, comes with chimichurri, radish, butter snap peas, mint, horseradish and special dips made of house-rendered beef and vegetables, sort of like a classy steak fondue.

Snider said they pride themselves on making everything from scratch, including all the bread, pastries, sauces and pasta. The chicories salad comes with avocado, corn nuts, cotija cheese, orange and tomatillo dressing. The Milanese pork chop comes with house-smoked trout tonnato, lemon and local summer greens.

The plates are meant to be shared, and prices for lunch run from $9 to $16 with dinner in the same range except for the higher-end items such as the pork “blade chop” with charred pineapple, cilantro and other ingredients for $28.

“Us being open for lunch is a really nice thing to bring to downtown,” Maddie Schneider explained. “People are excited about it. There’s so many businesses in this building, so we’re excited and anxious to see what lunch is like. People need a place to get something quick or to sit down with clients.”

Jordan Lane, the guitarist and singer for the local band Letter B, was recently hired as a bartender. He said the owners hired people based on enthusiasm and energy rather than experience, and the application asked questions about travel and other life pursuits.

Music is a big theme of the bistro. They’ve remodeled the space with paintings of jazz musicians Miles Davis, John Coltrane and Thelonius Monk, along with artistic displays of horn instruments and keyboards.

That philosophy carries over to the kitchen, he went on.

"When you are in a creative moment as a chef, things are flowing, and they feel good and dishes are poppin’ and seasoned properly. You’re mentally in the right zone, and you’re able to express that. Same as a musician in the second set of a show,” Snider said.

The first set at a concert is all about warming up the crowd and saying “hello” to the audience, Snider explained.

“But in the second set, it opens up and the flow happens,” he continued. “Same concept with the kitchen. When we are firing on all cylinders, it’s flowing in the kitchen. That’s the cornerstone of our philosophy. We want to bring that experience of that second set of the musical show, that same relationship, with the audience being our customers. Every night is a new night. And we want to reflect that in our food.”

Raz Schneider bought the Miners Saloon in Cooke City, Montana, in 2004 when he had “a thousand bucks” in his pocket. This is the first time he and his wife and business partners have built a restaurant from scratch.

“What makes us a little bit different is we’re not strapped by investors, you know,” Raz Schneider explained. “So we can change whenever we want. We don’t have to answer to anybody. It’s our vision. We don’t have a bunch of people above us saying ‘we put in this money’ so we’re not hamstrung by that. It gives us the freedom to adapt.”

They’ll evolve with the clientele and the seasons and local farmers, he said.

“We’re not hamstrung by money above us,” he reiterated. “Again, it’s terrifying, but it’s also freeing knowing we can make the call.”