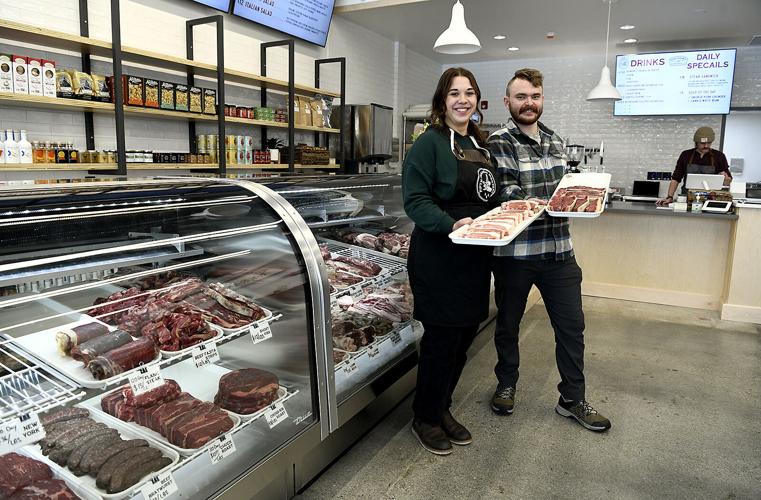 Tesa and Dillon Kouf hold some of the cuts of meat available at their new Double K Ranch Deli in Missoula recently. Their beef, pork and lamb cuts come from animals raised on the family's Double K Ranch near Darby. 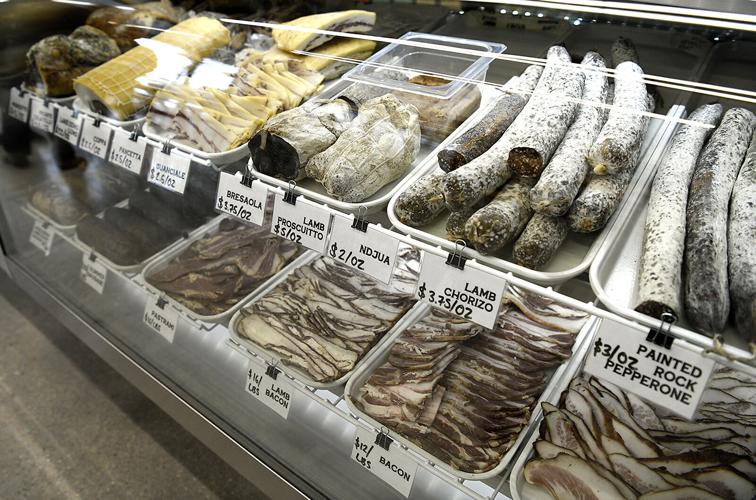 Dillon Kouf sounds like an encyclopedia as he recites the cuts of meats in his new cold case.

He goes on for another two minutes at a fast pace, listing a mind-blowing assortment of beef, pork and lamb cuts, all from animals raised in the Bitterroot Valley.

Kouf is co-owner of the Double K Ranch Deli, a new restaurant and deli in central Missoula.

Dillon, his wife Tesa Kouf and their team recently completed more than a year of planning, paperwork and remodeling the space at 2700 Paxson Street, Suite B, near Southgate Mall. All their meat comes from their family's Double K Ranch near Darby, where they have a curing room and are state-certified to process the animals they raise.

The Double K brand has been in Missoula for a few years at local farmers markets and through a food truck, but Dillon Kouf said they’ve long had the idea to bring a permanent store and restaurant to their loyal customer base in Missoula.

“So really we wanted to be able to get it in front of the customers' eyes,” he explained. “And then having our own kitchen where we can make, you know, our Smashburger and our beef sandwiches.”

Tesa Kouf said it’s that direct interaction that was really an important part of the plan.

“We’re doing a lot of things that other shops aren’t necessarily, so I think it’s really nice for us to be able to have that direct face-to-face interaction where we can explain some of our products like the cured meats that a lot of people have never heard of,” she said. “Just to explain where it’s coming from, why it’s priced and the way it’s raised. All that stuff.”

For example, they dry age their meat for 30, 60 and 120 days, which means it loses a lot of its water weight and gets tender.

They also pride themselves on their all-natural Angus beef, which is free of hormones and antibiotics. The cows are bred, born and raised on the ranch and grass-fed and finished right on the property. They don’t have to be shipped to a slaughterhouse to be processed and are custom cut right on the property. Their heritage-breed hogs are also pasture-raised on the ranch. Tesa Kouf said she has a good answer for people who point out that they might be able to save a few bucks per pound on mass-produced meat at the grocery store.

“That’s fine for people to do that,” she said. “But our thing is we can guarantee that you’re getting an animal that was raised correctly and humanely, and really cared for. It never left our care. Our animals were raised in a field as opposed to animals who were born and raised in a barn and never saw grass.”

Dillon Kouf said the ranch was started by his father, Jim Kouf, in 1985. The ranch was founded on respect for the land and the love of a great steak. Jim and his wife Lynn wanted to produce high quality meat that’s raised ethically and sustainably.

Their hot menu includes items like a braised beef sandwich, a lamb burger, a mushroom Swiss burger and daily specials. The steak frites are made with dry-aged beef sirloin, chimichurri, red wine jus, pork fat fries and herb mayo. They have an assortment of drinks and they’ll eventually be serving coffee and breakfast.

“You can always come in here and get a burger and a sandwich,” Dillon said. “We also have some high-end retail products that you might not find in grocery stores, like the Brightland olive oil or the Fishwife canned fish or the Bianco DiNapoli canned tomatoes, so you can build a charcuterie board with all the stuff you can buy here.”

If the customer reaction so far is any indication, they’ll be busy in their new space.

“People that have come in so far have been really excited,” Tesa Kouf said.

Mysterious, huge, $8M warehouse being built west of Missoula near I-90

The warehouse is being built with insulated precast concrete panels for walls. The same construction method has been used for Amazon warehouses.

There are no plans to change the name or staff at Bob Ward & Sons.

If you want to have a Grand Slam breakfast, you'll have to drive to Great Falls — Missoula's Denny's restaurant is no more.

French ski resorts: How a snowless town put itself back on the map

French ski resorts: How a snowless town put itself back on the map

Tesa and Dillon Kouf hold some of the cuts of meat available at their new Double K Ranch Deli in Missoula recently. Their beef, pork and lamb cuts come from animals raised on the family's Double K Ranch near Darby.