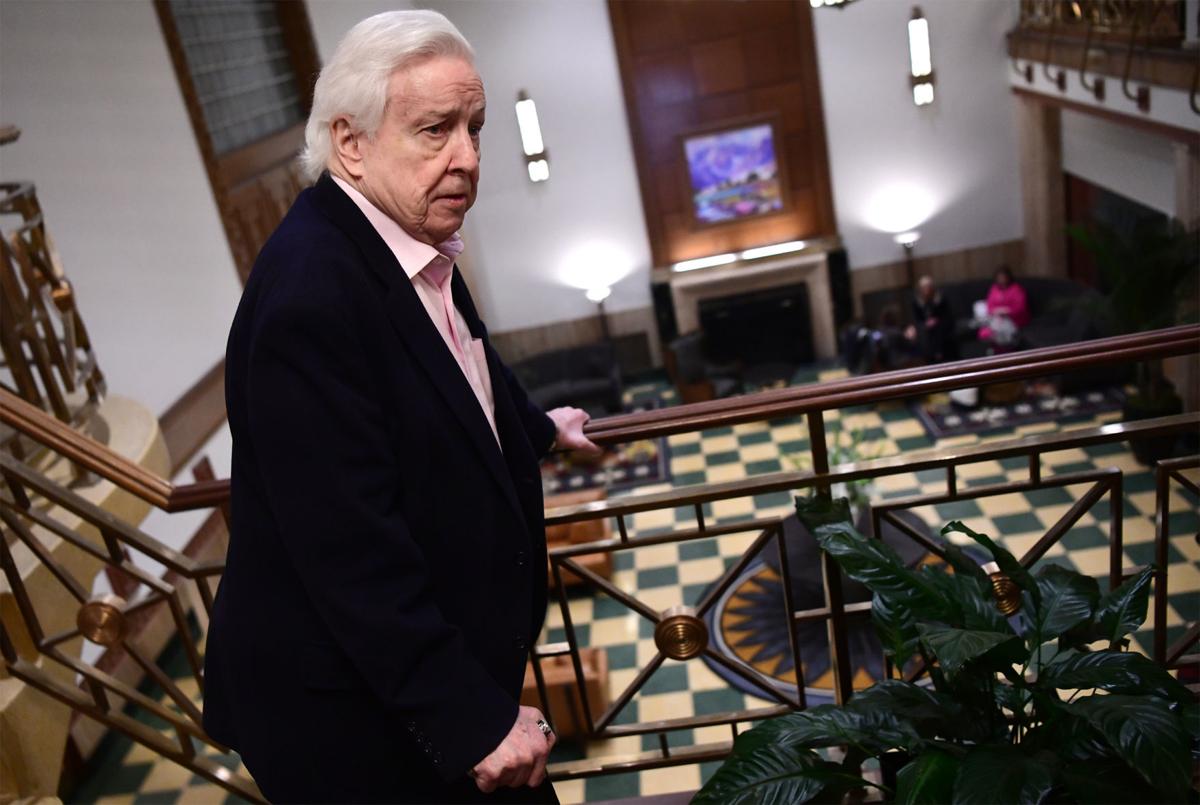 Florence Building owner Thomas Taylor looks out over the newly restored lobby in downtown Missoula on Monday morning. Taylor bought the building last fall with the goal of restoring the former hotel to its 1940s Art Deco state. 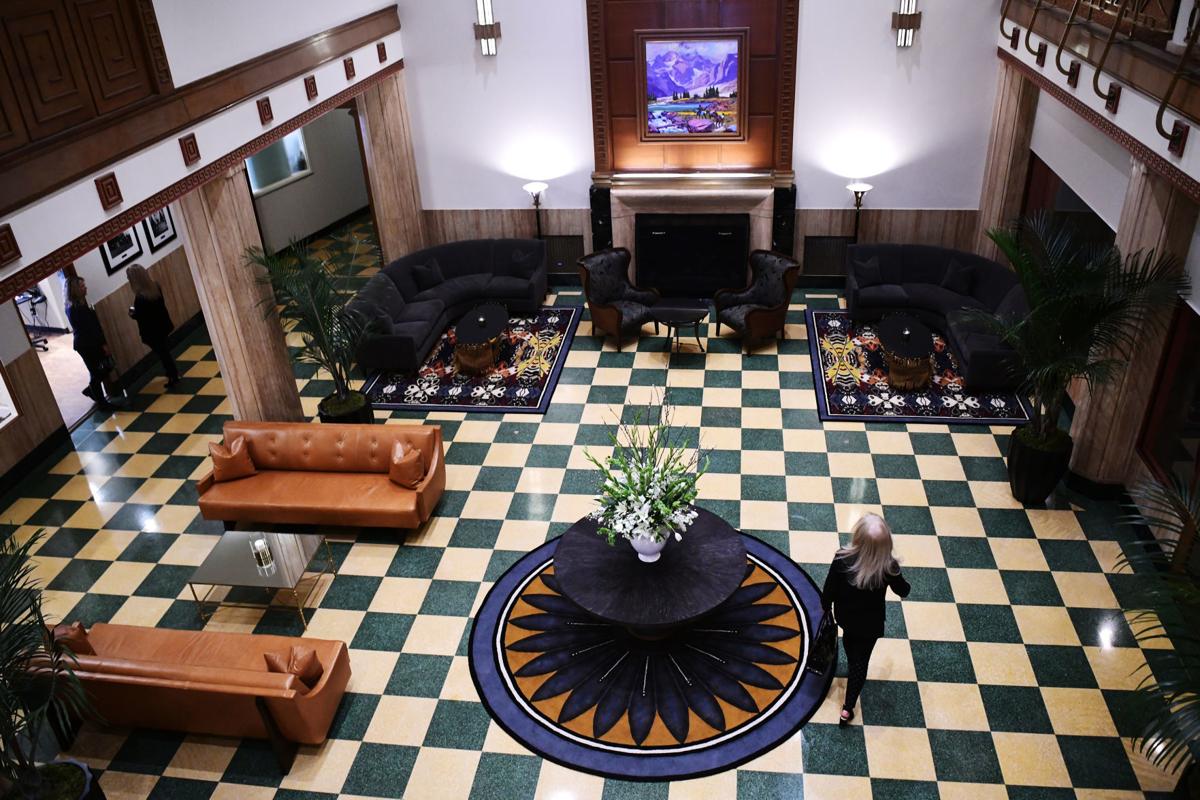 The original Florence Hotel was built in 1888, but burned down in 1913. The second iteration also burned in 1936. The current building was completed in 1942, and the hotel once featured a bustling ballroom and a restaurant.The hotel was remodeled into an office and retail complex in the 1970s.

If you want to experience the historic Florence Hotel in its true 1940s Art Deco glory, now’s the time to check out the lobby at 111 N. Higgins downtown.

New building owner Thomas Taylor and his family recently hired a crew of interior designers, painters and construction workers to restore the vast space to its original décor.

They held a reception and dedication of the lobby renovation on Monday night to welcome the community and show off a project in which they take pride.

"And here that could be the mountains and the river and lots of things," he continued. "But also here it can be the public spaces and private spaces as well. So I think having this kind of character just contributes to making this a great city along with all the other character the city has.”

Taylor is the owner of a Texas engineering firm with expertise in building preservation. His daughter Lauren lives here and he bought the Florence Building last fall with the goal of restoring as much of the building as he can. He also owns downtown buildings across the street. The Florence Building, though, put a gleam in his eye as he surveyed the new furniture, new fixtures and vibrant new paint from the second-floor balcony.

“The whole idea, the design concept, is the 1940s Art Deco,” he said. “ The building is that, and the idea is to do all the interiors like that. We’re trying to use as many old photographs or information that we have that we can return not only to the '40s but to the exact '40s. For example the chandeliers, even though they’re replicas that we had made, they’re identical to photographs.”

The Red Bird Restaurant recently closed, but a new restaurant called Second Set Bistro is working on opening in the late summer or early fall. That establishment is planning on serving lunch along with dinner, which should attract more daytime visitors to the lobby.

The original Florence Hotel was built in 1888, but burned down in 1913. The second iteration also burned in 1936. The current building was completed in 1942, and the hotel once featured a bustling ballroom and a restaurant.

The hotel was remodeled into an office and retail complex in the 1970s. It now houses an insurance company called ALPS, a fast-growing tech company called LumenAd and several other businesses. With its signature style, unique original facade and interior elements and long history as a regional gathering hub, the building was listed on the National Register of Historic Places in 1992.

Taylor and his family hired Kelly Roessler and Katie O’Reilly of Intaglio to design the interior, and they bought furniture that closely matches the original lobby.

“Kelly poured her heart and soul into it, so we’re really excited,” said Lauren Thomas.

Workers studied the photographs and made the chandeliers and sconces the exact size they were when the building operated as a gathering place for travelers in the World War II and postwar era.

In old photographs, there were palm trees in the lobby, so those are now back. Ona Magaro of OM Design hand-made the chandeliers, and SPS Painting and Sirius Construction also helped out.

The Catalyst Café is for sale, and Taylor said he’s waiting to see if he can get a tenant in that space before he renovates the Governor’s Ballroom on the second floor.

“We do have plans down the road to make (it) more like back to the 1940s,” Lauren Taylor said.

The family also renovated the basement locker rooms and showers so more of the workers in the building can bike to work. With economic activity bustling downtown and the Missoula Downtown Partnership set to host a presentation of the draft of the new Downtown Master Plan on Wednesday night at the Wilma Theater, Taylor is bullish on the city’s future.

“I felt like this was important for all of town,” he said.

It wasn’t for sale, but Thomas Taylor’s mind was made up.

From new housing to new businesses to new public institutions, construction continued at a feverish pace in the Garden City last year.

Three Missoula companies are on track to be awarded a combined $345,000 in state grants to create 46 new, relatively high-paying jobs.

Montana Highway Patrol Trooper Wade Palmer, grievously wounded in a shooting in March, will return to Montana Wednesday to continue his recovery.

A draft of a new Downtown Master Plan for Missoula will be presented to the community Wednesday night at the Wilma Theatre, after an eight-mon…

Tuition is a deal at the Montana flagships compared to peer institutions in the region, but mandatory fees are more costly, according to data …

Florence Building owner Thomas Taylor looks out over the newly restored lobby in downtown Missoula on Monday morning. Taylor bought the building last fall with the goal of restoring the former hotel to its 1940s Art Deco state.

The original Florence Hotel was built in 1888, but burned down in 1913. The second iteration also burned in 1936. The current building was completed in 1942, and the hotel once featured a bustling ballroom and a restaurant.The hotel was remodeled into an office and retail complex in the 1970s.