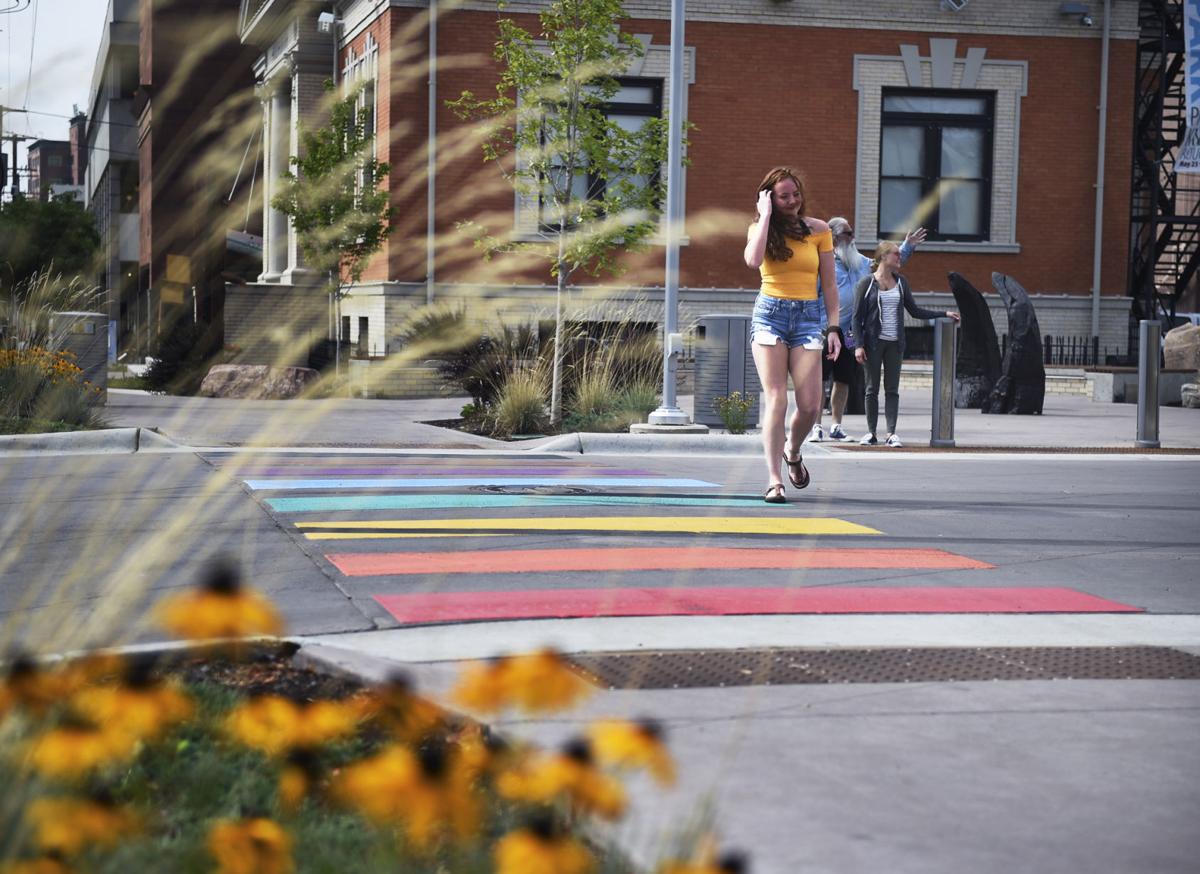 Kihla Lax, 14, crosses Pine Street using the new LGBTQ+ crosswalk Tuesday afternoon. Lax and her grandpa, who is visiting from Nashville, took photos on the crosswalk. The city of Missoula and Empower Montana worked together to bring the crosswalk to Missoula, mimicking cities such as Philadelphia, Seattle and San Francisco. 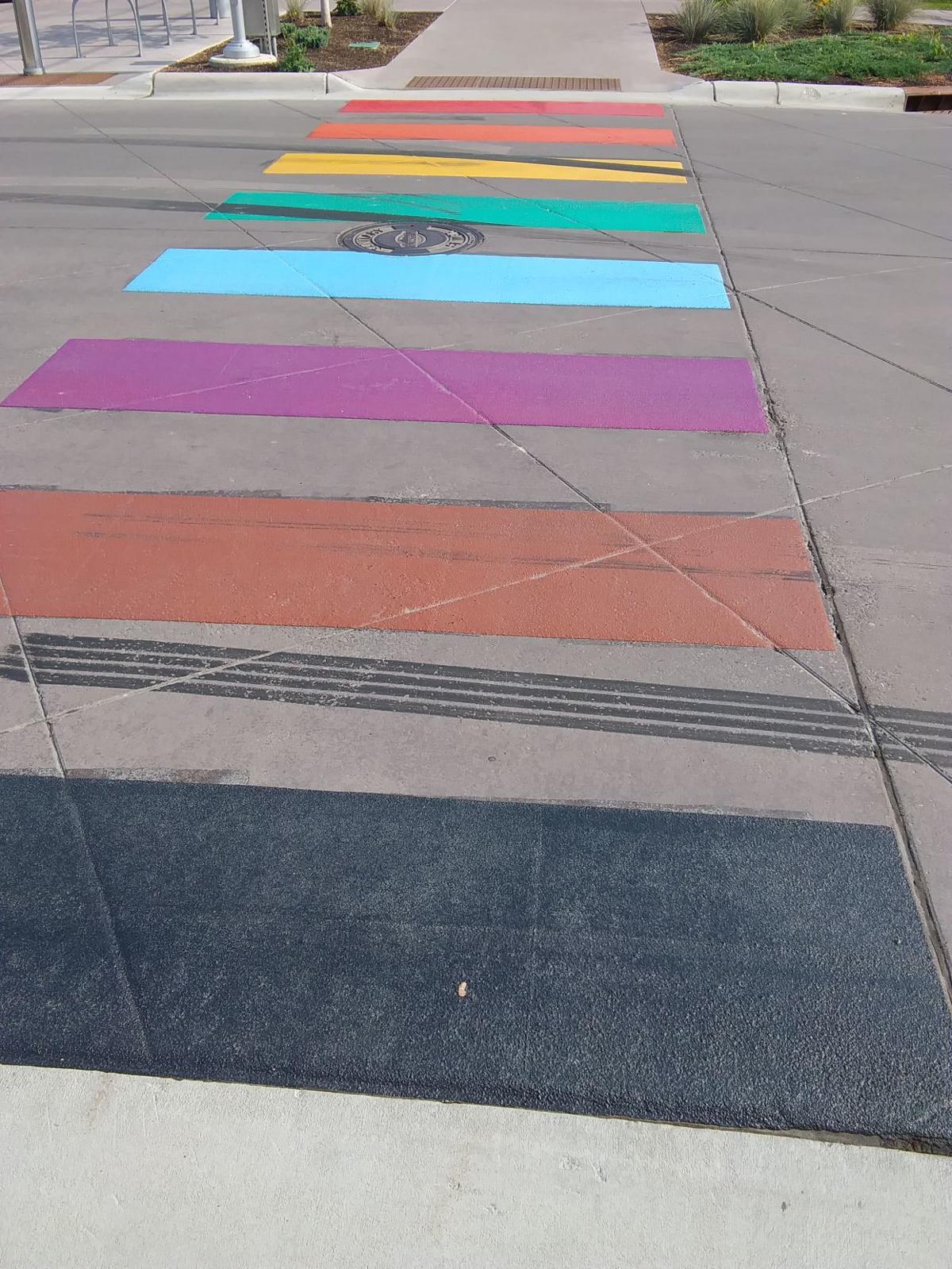 Tire burnout marks on a new rainbow crosswalk that stretches across Pine Street near the Missoula Art Museum’s art park.

MADELINE BROOM for the Missoulian

Wednesday morning, new black markings could be seen on a new rainbow crosswalk that stretches across Pine Street near the Missoula Art Museum’s art park.

The markings, which appear to be tire burnout marks, are suspected to be vandalism. While two markings could be seen on the crosswalk Tuesday, by Wednesday morning there were as many as seven.

Cassidy Tucker, the MAM’s visitor services coordinator, said the museum has security cameras around the art park that can see the crosswalk, but the images would most likely be poor quality. With over a hundred hours of possible footage, Tucker said they’d need to know a time window.

While a bias act that “damages, destroys, or defaces any property of another or any public property'' is a hate crime under Montana state law, sexual orientation and gender identity are not included in the law.

Acts of bias perpetrated because of “involvement in civil rights or human rights activities” are protected under the law. It is unclear if the law would protect the crosswalk built by Empower Montana, a nonprofit that advocates for marginalized communities in Montana.

“Targeted vandalism like this is meant to intimidate members of the LGBTQ community,” wrote Kim Abbott, co-director of the Montana Human Rights Network, in an email.

Michelson said these acts against a symbol of love and inclusion reminds her, and everyone fighting for equality, that there is still a long way to go when it comes to building bridges with those they don’t agree with.

Abbott wrote that although she knows most Missoulians are welcoming and accepting of LGBTQ community members, “the Network continues to receive reports of harassment and vandalism targeted at the LGBTQ community.”

Michelson’s biggest worry isn’t the logistics of repairing the crosswalk, but of the toll the vandalism and hateful comments on Facebook are having on the youth that made this project happen.

Comments like these take a toll on the mental health of members of the LGBTQ community, Michelson said.

“We knew some push back would happen, anticipated vandalism, but not so soon and not to this extent,” Michelson said. The crosswalk was installed on Sunday.

Andy Nelson, operations administrator for the Western Montana LGBT Community Center, said Missoula is the perfect place for the first rainbow crosswalk in Montana because, despite the vandalism, the community is supportive of the LGBTQ community.

“Seeing a rainbow on the street makes a person feel welcome and the vandalization does not take away from it,” Nelson said.

He said the LGBTQ community has always received push back and this is no different.

“It won’t make us hide or stop living our truth.”

While Empower Montana continues to decide what the repair process will look like with the assistance of the City of Missoula and the Missoula Police Department, Michelson said “we aren’t going to let this shake us.”

"We're still working hard, loving our community and this will only bring us closer together."

Empower Montana, a local nonprofit, recently completed a yearlong project to install a rainbow crosswalk featuring the colors of the Philadelp…

University of Montana dean will be paid through June, but not working

The University of Montana will pay the dean of students her salary of $89,829 through June 30, 2019, although she is no longer on the job.

Oregon man gets 130 days in jail for harassing Yellowstone bison

An Oregon man who said he and his buddy were on a "last hurrah" tour through national parks before he entered alcohol treatment was sentenced Thursday to 130 days in jail for his drunken behavior, including harassing a bison that had stopped traffic in Yellowstone National Park.

Today, maybe as you’re reading this, Ryan Montgomery, who along with his wife Jenny owns and operates Montgomery Distillery, will be racing ac…

A Missoula man has been sentenced to 10 years in federal prison for meth distribution, closing the book on a case investigated by the FBI's Re…

A Missoula judge ruled this week that the criminal statute regarding the exploitation of the elderly is unconstitutionally vague.

High-speed chase ends with a crash, arrest in Idaho County

A high-speed chase that started in downtown Missoula ended with an arrest in Idaho County after the suspect crashed his car.

A female grizzly bear with at least one young cub or yearling has been identified as the animal that attacked a 10-year-old Washington boy in Yellowstone National Park on Thursday.

'A beacon of hope': Missoulians gather to celebrate rainbow crosswalk

Kihla Lax, 14, crosses Pine Street using the new LGBTQ+ crosswalk Tuesday afternoon. Lax and her grandpa, who is visiting from Nashville, took photos on the crosswalk. The city of Missoula and Empower Montana worked together to bring the crosswalk to Missoula, mimicking cities such as Philadelphia, Seattle and San Francisco.

Tire burnout marks on a new rainbow crosswalk that stretches across Pine Street near the Missoula Art Museum’s art park.