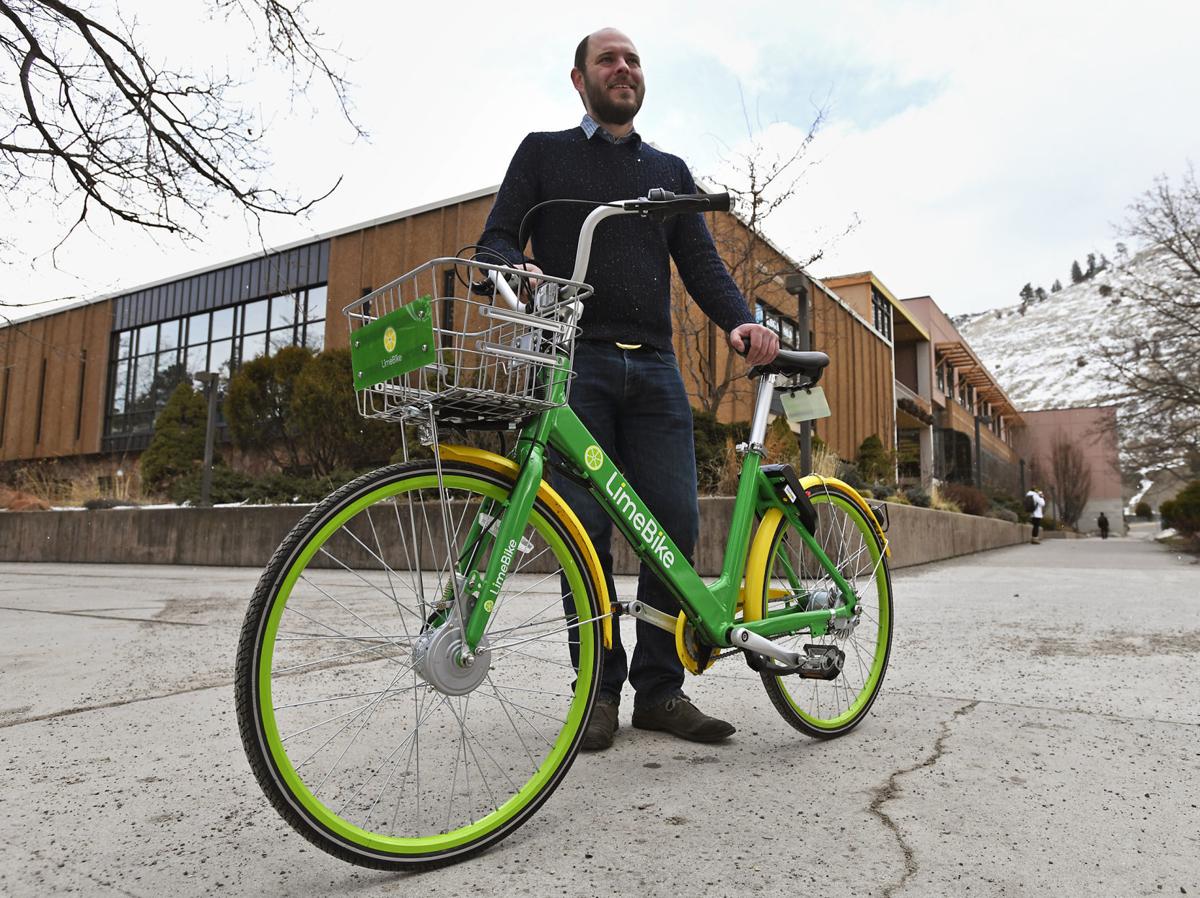 Missoula City Council member Jordan Hess stands with a LimeBike on the University of Montana campus in this March 2018 file photo. 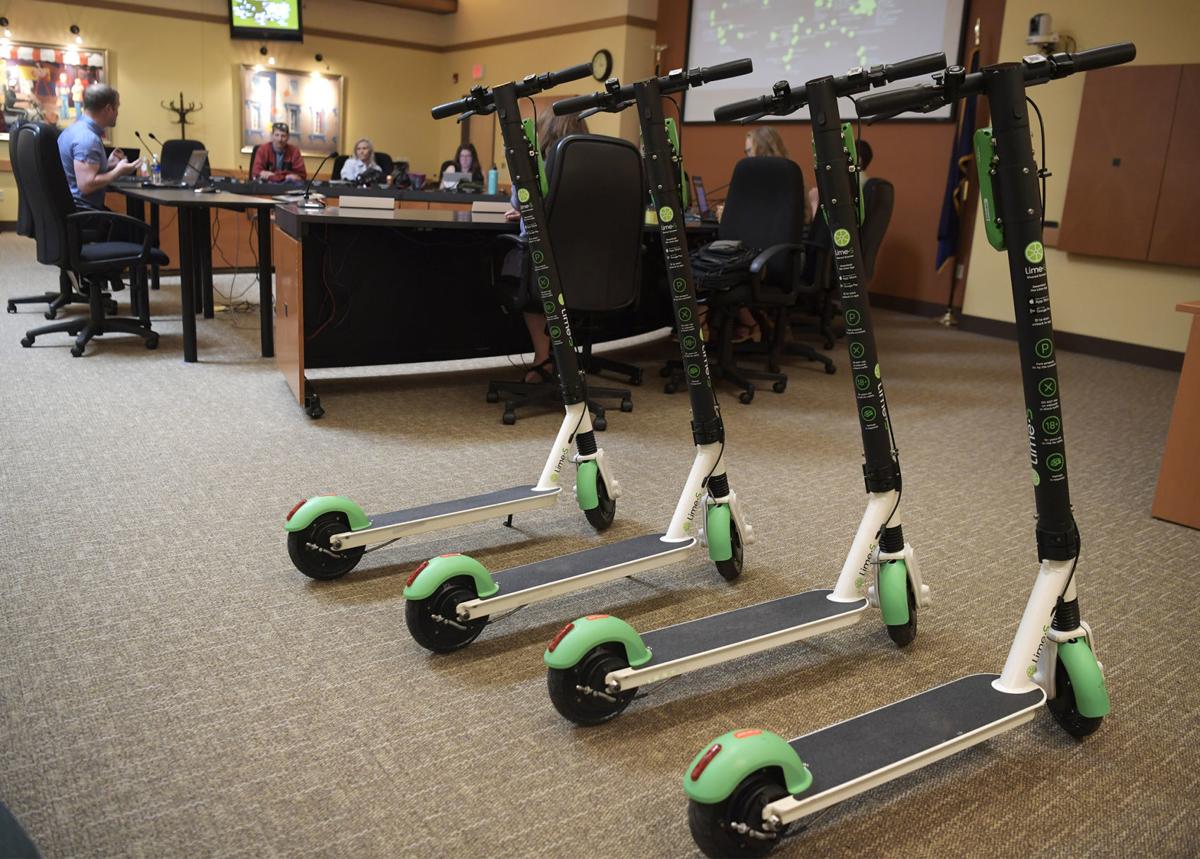 The e-scooters rented by Lime typically cost $1 to unlock and around 15 cents a minute to ride. The company usually staffs a local team to service the scooters, as well as what they call "juicers" they pay to charge them. 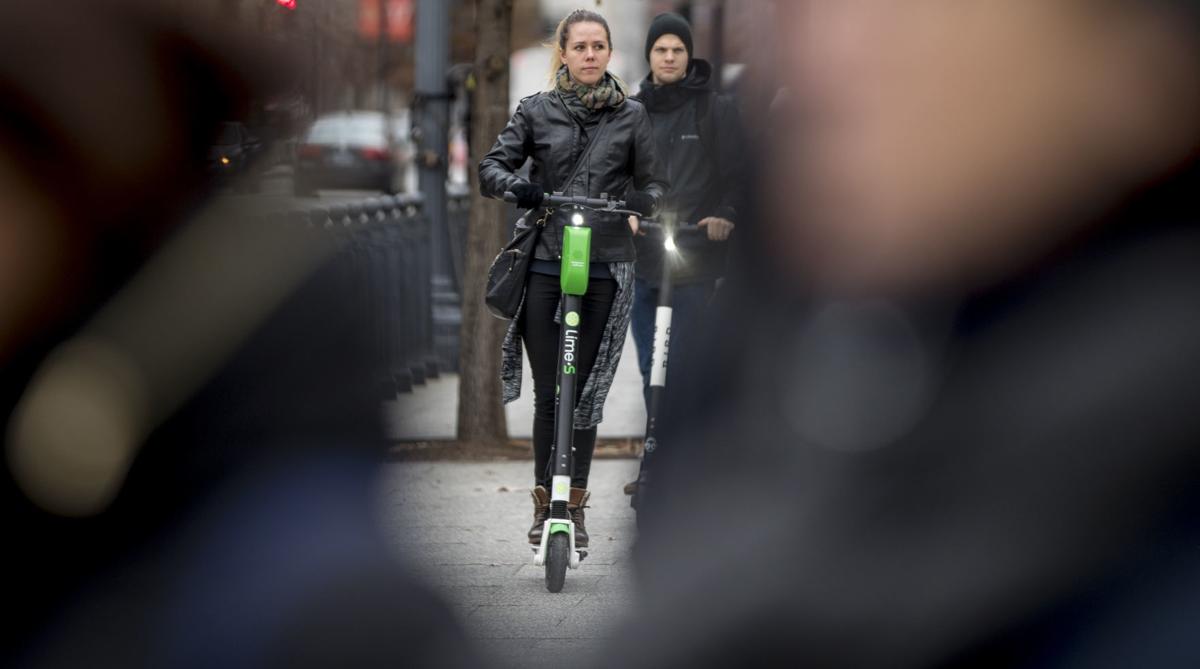 A couple rides scooters Dec. 4 near the White House in Washington. Electric scooters are overtaking station-based bicycles as the most popular form of shared transportation outside transit and cars.

There won’t be any electronic scooter or dockless e-bike companies in Missoula for at least another year, if not longer.

The Missoula City Council’s Public Works Committee voted on Wednesday to table a proposed ordinance that would have allowed dockless e-scooters and e-bike companies to operate here. Companies like Lime, which operates its scooters and bikes in Spokane, had been eyeing Missoula but the committee’s action on Wednesday means it’s still illegal for those companies to operate here using public right-of-way. Local bike shops will still be able to rent e-bikes.

“My view on that is the ordinance that was written addresses a lot of the public’s concerns and was a very good ordinance, but tabling allows us to not pass the ordinance and still take definitive action,” he said. “We are essentially saying we’re not ready. Maybe we will be someday. Public comment and scooter systems around the country have basically led us to say we’re not ready.”

The council heard concerns from the public about safety and about how the scooters would be regulated on sidewalks with pedestrians.

Hess made an effort to point out to his fellow council members that cars and trucks pose greater safety risks than e-scooters and bikes, yet society has found a way to adapt and create a regulatory framework for those vehicles.

“We’re killing multiple pedestrians a year and blocking ADA access with vehicles,” he said. “But I’m perfectly comfortable to let other communities figure out what’s going on (with e-scooters and e-bikes) and continue to watch.”

He said the council can revisit the issue when the time is right. Hess added that although several members of the public were opposed to the e-scooters and bikes, he also heard from a lot of people who thought they could make a positive impact by giving people short-term, point-to-point mobility options while reducing vehicle traffic and congestion.

There were nearly 6,000 pedestrians killed by cars and trucks in the U.S. in 2017, according to the National Highway Safety Transportation Authority. More than 37,000 people in America died in motor vehicle crashes that year. Consumer Reports recently reported that there have been eight e-scooter related deaths in the U.S. since the fall of 2017.

Council member Jesse Ramos said he would definitely be in favor of e-scooters down the road, but he would like to see if the companies can achieve profitability first. He also said that he didn’t think the companies were as close to wanting to launch in Missoula as some members of the council and general public seemed to think they were.

Ben Weiss, the manager of the city’s bicycle and pedestrian program, said providing infrastructure for bicycles, e-scooters and e-bikes would address most of the safety concerns.

“It’s providing a safe space to ride that gets people off the sidewalks,” he said.

He noted that on Higgins north of Broadway, where there is an off-street dedicated bike lane, the city has counted far fewer people riding bikes on the sidewalk compared to south of Broadway, where bicyclists are at risk of getting doored by parked cars or getting hit by driving vehicles.

Council member Mirtha Becerra said she supports e-bikes being allowed on commuter trails. However, she currently opposes the idea of bringing e-bike or scooter companies to Missoula.

“The concept of commuting and using an e-bike is appealing to me and a lot of community members and the concept of removing the commuter trails seems illogical to me,” she said. “I agree that a bike, either motorized or not, is a vehicle, but we have a system of commuter trails that we need to include in order to make that effective."

This story has been updated to clarify Councilor Mirtha Becerra's position on e-bikes and scooters.

Slow zones, primary commuter trails and limits on sidewalk riding are some of the proposed rules discussed Wednesday that may govern the use o…

Members of the Missoula City Council zoomed around a downtown block on Wednesday on electric scooters made by the San Francisco company Lime, …

City Council defers decision on use of e-bikes, e-scooters on park trails

City planners deferred approving the use of electric bikes and scooters on park trails Monday, along with approving funding for an easement al…

When it comes to regulating electronic scooters and bikes, the rules literally are all over the map.

Electric bikes will be allowed on commuter trails in Missoula, but not on the trails in the soon-to-be-acquired Grant Creek open space. A mara…

Fifth and Sixth streets to become single-lane next week

Parts of Fifth and Sixth streets will undergo work next week to become one-lane streets as part of a plan to improve driver, pedestrian and bi…

Missoula City Council member Jordan Hess stands with a LimeBike on the University of Montana campus in this March 2018 file photo.

The e-scooters rented by Lime typically cost $1 to unlock and around 15 cents a minute to ride. The company usually staffs a local team to service the scooters, as well as what they call "juicers" they pay to charge them.

A couple rides scooters Dec. 4 near the White House in Washington. Electric scooters are overtaking station-based bicycles as the most popular form of shared transportation outside transit and cars.