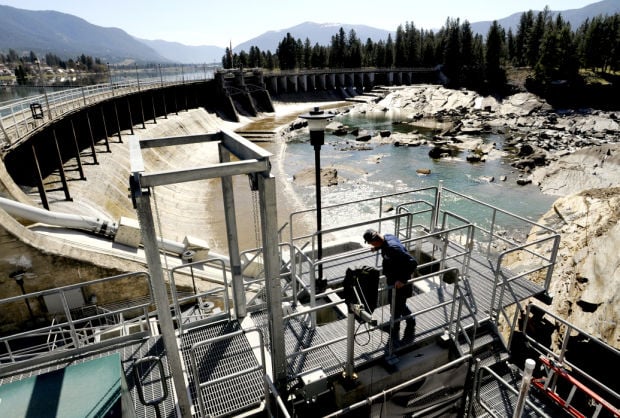 Brent Mabbott, senior fisheries biologist for PPL Montana, checks the water level at the top level of the fish ladder at the Thompson Falls Dam. 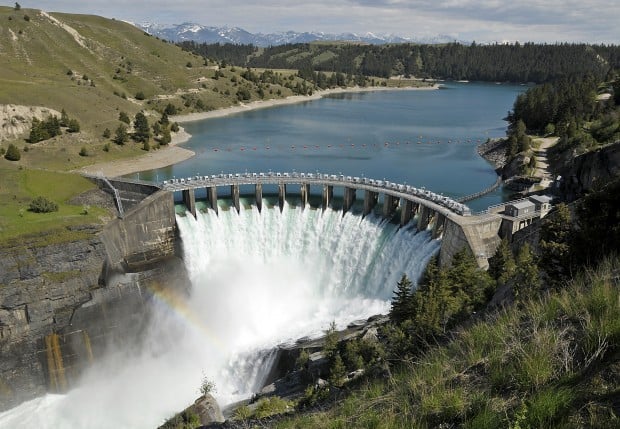 Water flows through the spill gates of Kerr Dam in May 2011.

HELENA — Montana's much-maligned 1990s-era experiment with utility deregulation is one step closer to reaching an end.

NorthWestern Energy Corp. made its pitch Friday to investors on its plans to spend $900 million to buy back 11 hydroelectric dams that were sold off to PPL Corp. during deregulation.

CEO Bob Rowe said buying the dams is in the long-term interest of customers and shareholders, echoing comments made by Montana Power leaders more than a decade earlier to justify opening the market. The idea received a warm immediate reaction from investors and policy leaders, and share prices rose slightly on the news.

NorthWestern Energy didn't have to look far to find the "absolute ideal resource," as Rowe put it, to provide electricity to its Montana customers — the same hydroelectric dams once part of the utility's operations.

Rowe said he has envisioned rebuilding a utility that owns its own electricity generation capability ever since taking over in 2008. The chance to buy back dams that were built for its customers, and already are tied into its network, was a "unique" opportunity that will transform the company.

"This is a huge step forward, entirely consistent with what we have been describing to you," Rowe told investors of their plans. "This is a historic transaction for NorthWestern, and I believe for our customers as well."

He said more than half the company's power would be provided by renewable sources — hydro, wind, or solar — after it completes the deal. And it would own enough generation power to completely serve customers during light-load times.

The company said it is buying the assets at a time when energy prices are low, and power generation is relatively cheap. Montana consumers, who saw power prices spike in the early 2000s almost immediately after deregulation, know that isn't always the case.

For years, many in the state have dreamt of rebuilding the broken pieces of a stable, publicly regulated utility.

When the old Montana Power Co. came to lawmakers in 1997 with a plan to offer consumers a multitude of choices for cheap power, deregulation was seen as inevitable. But the power turned out to be far more expensive, and the other promises made that year quickly rung hollow.

It is one of the most notorious business stories in the state's history.

Montana Power sold off its dams and power plants to PPL, then its utility business to NorthWestern to pursue an ill-timed pipedream to become a fiber-optic company. The storied household name, a longtime sponsor of civic events around the state, soon was bankrupt. Hundreds of company retirees holding the stock saw their savings disappear.

Even NorthWestern Energy, expanding too quickly, was forced to file for bankruptcy shortly after the deal. At one point, a foreign hedge fund even tried to gobble up the state's utility business.

Consumers likely will see a 5 percent increase in their bills to pay for the cost of buying back the dams.

Gov. Steve Bullock, like most Montanans, bemoans those decisions long ago to deregulate. But he said the initial price tag is probably worth it.

"I would much rather have a Montana company owning our dams then a non-Montana company. I think NorthWestern is in it for the long-term," Bullock said in an interview. "When you look at the long-term stability, I certainly think it makes sense."

The company hopes to get regulatory approval in a year. But Rowe — who used to site on the Public Service Commission — knows the history of deregulation will mean a hard look at the deal.

The company said it hopes to make a public initial presentation to the PSC within a few weeks, with a formal application coming later in the year.

Brent Mabbott, senior fisheries biologist for PPL Montana, checks the water level at the top level of the fish ladder at the Thompson Falls Dam.

Water flows through the spill gates of Kerr Dam in May 2011.