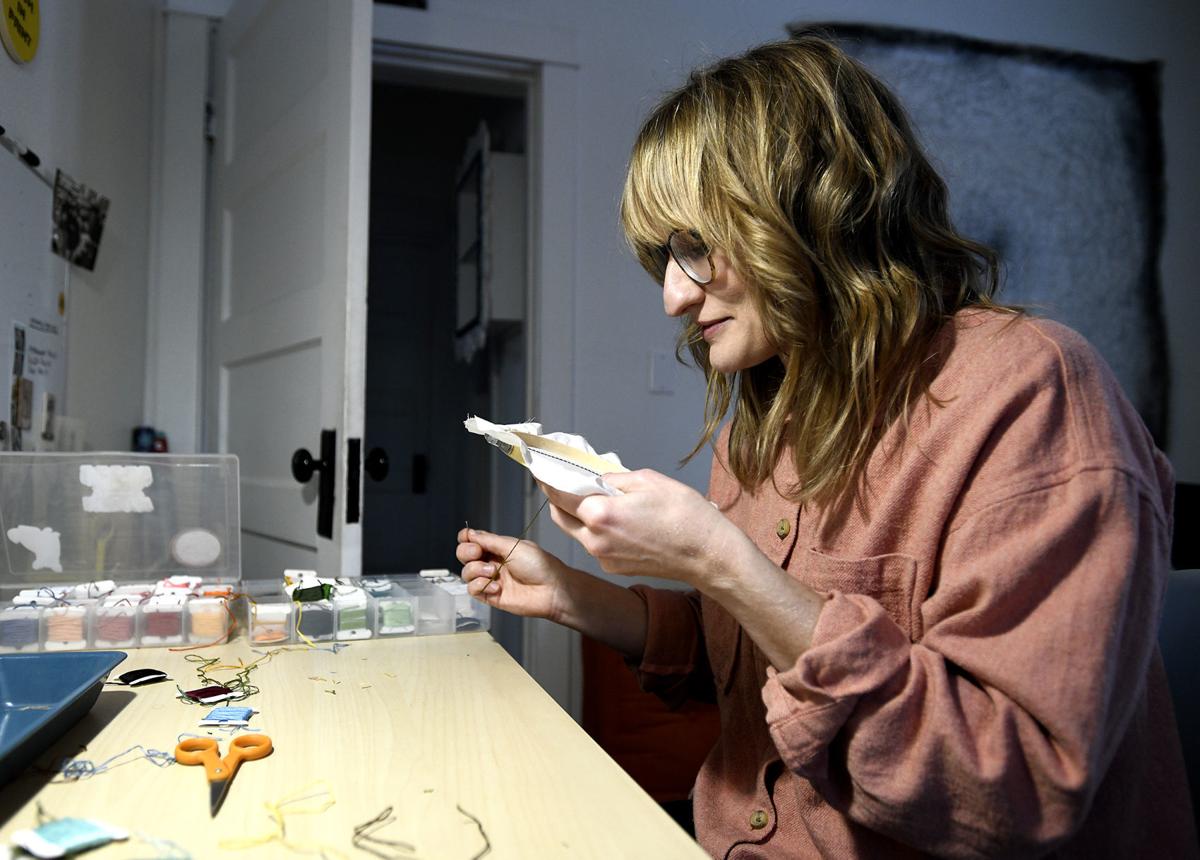 Robyn Windham stitches one of the embroidery pieces for her DGAF Embroidery business last week in Missoula. Windham's embroidery with a feminist and irreverent streak has taken off with its mix of empowerment and humor. 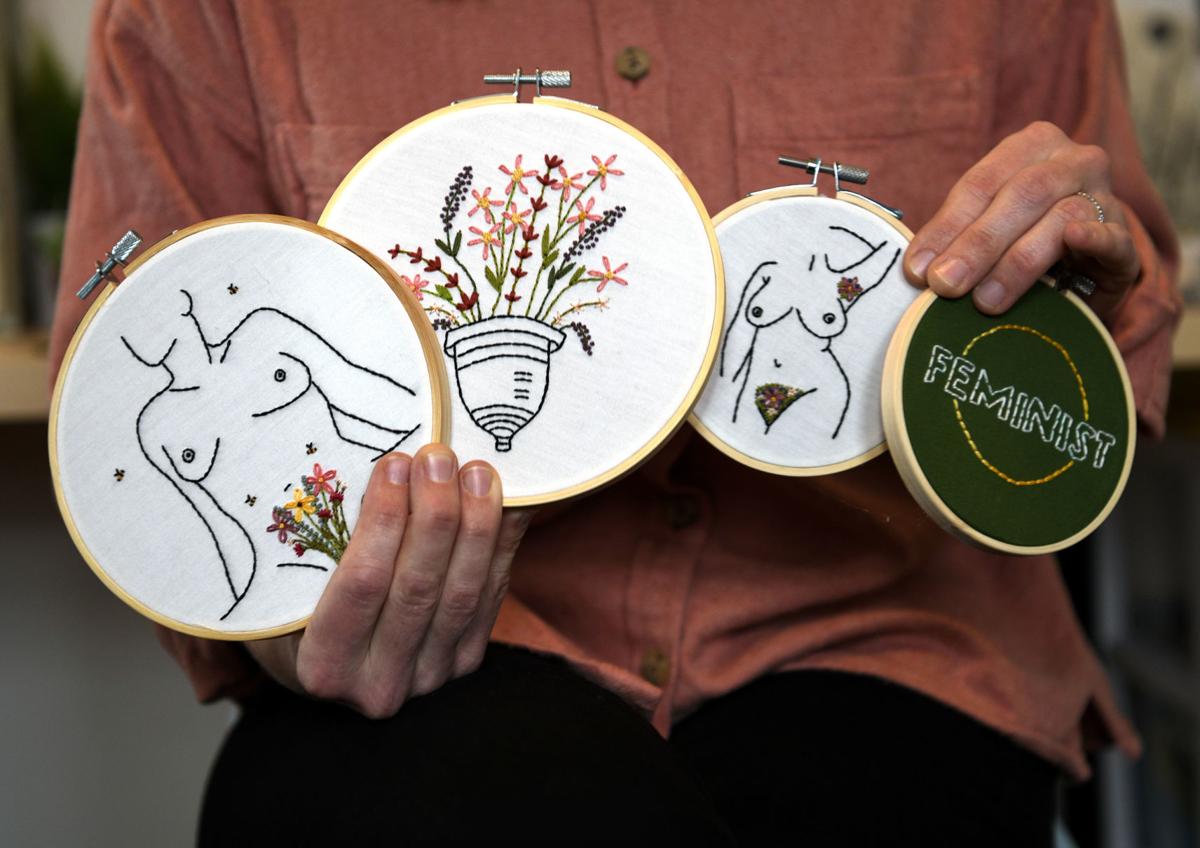 Windham holds some of her embroidery last week in her home studio. She sells her work through her website, the Showroom Makers Market and will also be at three holiday markets this month.

Robyn Windham stitches one of the embroidery pieces for her DGAF Embroidery business last week in Missoula. Windham's embroidery with a feminist and irreverent streak has taken off with its mix of empowerment and humor.

Windham holds some of her embroidery last week in her home studio. She sells her work through her website, the Showroom Makers Market and will also be at three holiday markets this month.

Robyn Windham pushed a tiny pink thread through the eye of a needle, prepping her tool to stitch itty-bitty flower petals. She plunged the needle up through the bottom of white fabric held taut in a wooden hoop, and back down, creating a single loop. Then she sent the needle through again, up and back down. With each loop, she slowly created a bouquet of colorful flowers.

The repetitive motion is meditative for Windham, owner of the new DGAF Embroidery company in Missoula.

For a younger audience that might be familiar with the acronym, the name says a lot about the business right off the bat. For everyone else, a peek at one or two of Windham’s stitch work pieces will get the point across.

This is not your grandmother’s embroidery.

Hanging on the wall in her home studio, a Christmas colored embroidery reads “Fa la la la la la la, f--- off”. Another shows a wine bottle opener and reads "Screw it." And yet another says “Ovaries before brovaries”.

“I guess I decided that my theme was mostly women and people who don’t give a f---,” she said. “I think just caring less about what society expects of us is something that would make us all happier, but that we have such a hard time doing — me included.”

If you’re still not sure, DGAF stands for “Don’t give a — " well, you get the picture.

The feminist, snarky stitching company started as a hobby for Windham this past January as a way to counteract the winter blues during Missoula’s cold, gray months and has quickly blossomed into a budding business.

Windham, who has a degree in women's studies from the University of Montana, has taken what she said is often thought of as a domestic, private activity and flipped it on its head. She didn’t want to stitch just anything, she wanted to empower women and make people laugh and think.

“It has a way of being both funny and powerful at the same time,” she said, adding people will often do a double take when they see her work. “It’s disarming I think in that it gets people to think about an issue.”

There may some “f-bombs” sprinkled throughout, but her messages are mostly empowering. So far she’s found most of the people buying her embroideries are women buying gifts for other women.

“Maybe their friend is going through a hard time or they’re going through a breakup,” she said. “Most people I find are buying them as empowering gifts for their girlfriends and I really like being part of that.”

One of her designs reads, “All of your emotions are welcome here,” something she said a customer asked her to stitch as a gift for a girlfriend going through a tough time. She liked it so much, it’s become a mainstay on her website.

Her friend Sarah Williams, who used to work with Windham at the UM Women's Resource Center and is also a teacher, said she purchased that same design for her classroom.

"DGAF is unsurprisingly a physical representation of all the things she represents: the intersection of feminism, creativity, humor," Williams said.

Windham works in feminist causes, so it’s not surprising her embroidery has a female-centric theme. But it has surprised Windham how quickly it went from hobby to business.

Last spring, Windham had given her friend Shelby one of her hobby embroideries as a going-away present at her local watering hole Draught Works. The work featured black stitching that created the outline of a female form, with colorful flowers sprouting from places on the body where there would normally be hair.

The embroidery caught the eye of Draught Works bartender AJ Smith, who said she immediately started looking into how she could get one of her own.

“I tracked (Windham) down on Instagram, just on her personal account, and messaged her to make three of them — two for my friends who were graduating and one for me,” Smith said.

The floral-haired female figures have since become one of Windham’s most popular designs.

“I think just the fact that it’s celebrating these parts of our bodies that sometimes we feel ashamed about and celebrating them and bringing them to life is how they caught my attention,” Smith said.

And she wasn’t alone.

“I started getting orders from people I didn’t know,” Windham said, adding they’d find her on Instagram and message her for details and prices. She realized she could start selling her work.

Soon after, Draught Works ended up asking her if she wanted to join a pop-up market at the brewery.

She took a week off work and stitched nonstop to create 70-some embroidery hoops, put together a table display and did her first pop-up in August.

“Ever since then, it’s been pretty steady,” she said.

Her smaller, simpler pieces take around 20 minutes while some of the more intricate works take more than two hours. And some have just one type of stitch, while others have six or seven, she said.

Those floral body hair designs that everyone loves? She said they’re the most difficult.

“Those take the longest because there are so many different stitches,” she said, adding that she’s developed calluses on her fingertips since the business took off.

Outside of embroidery, she has a full-time job in activism, raising money for feminist causes. She’s currently the development director for Women’s Voices for the Earth, a national organization based in Missoula that works to remove toxic chemicals in products, especially those marketed to women like tampons, cosmetics and beauty products.

She said she’s had her official business website up for about two months now and sells her work in the new Showroom Makers Market that opened on Third Street in Missoula last summer. She also has three more holiday pop-ups around town before Christmas (see box).

In the future, Windham hopes to expand from hoops to stitching more pillows and maybe embroidering clothing. She also wants to do cause-related events and maybe host stitching workshops.

She recently came across the word “craftivism” and said her work seems to fit that mold. She said she loves the idea of raising awareness about an issue through crafting.

She’s also looking into creating her own kits and patterns, so people interested in her work could buy a design and create a piece of their own.

“We have a bunch of ceramicists,” explained co-owner Julia LaTray. “We have jewelers, a woodworker, leatherworkers and multiple apothecary brands.”