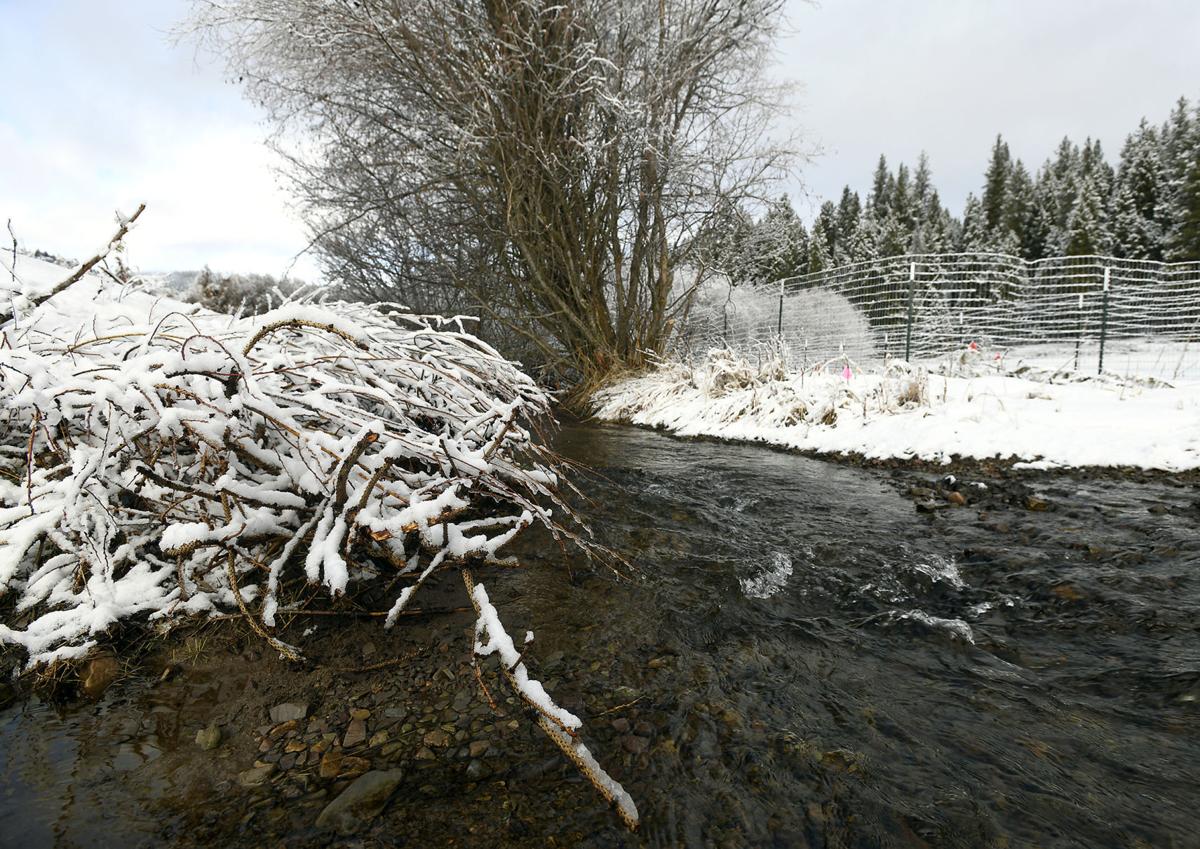 The Clark Fork Coalition headed the restoration on Miller Creek, re-shaping the stream into a meander, reinforcing banks and planting willows and other native plants and trees. The creek should hold more places for native trout to survive and hopefully produce beaver dams. 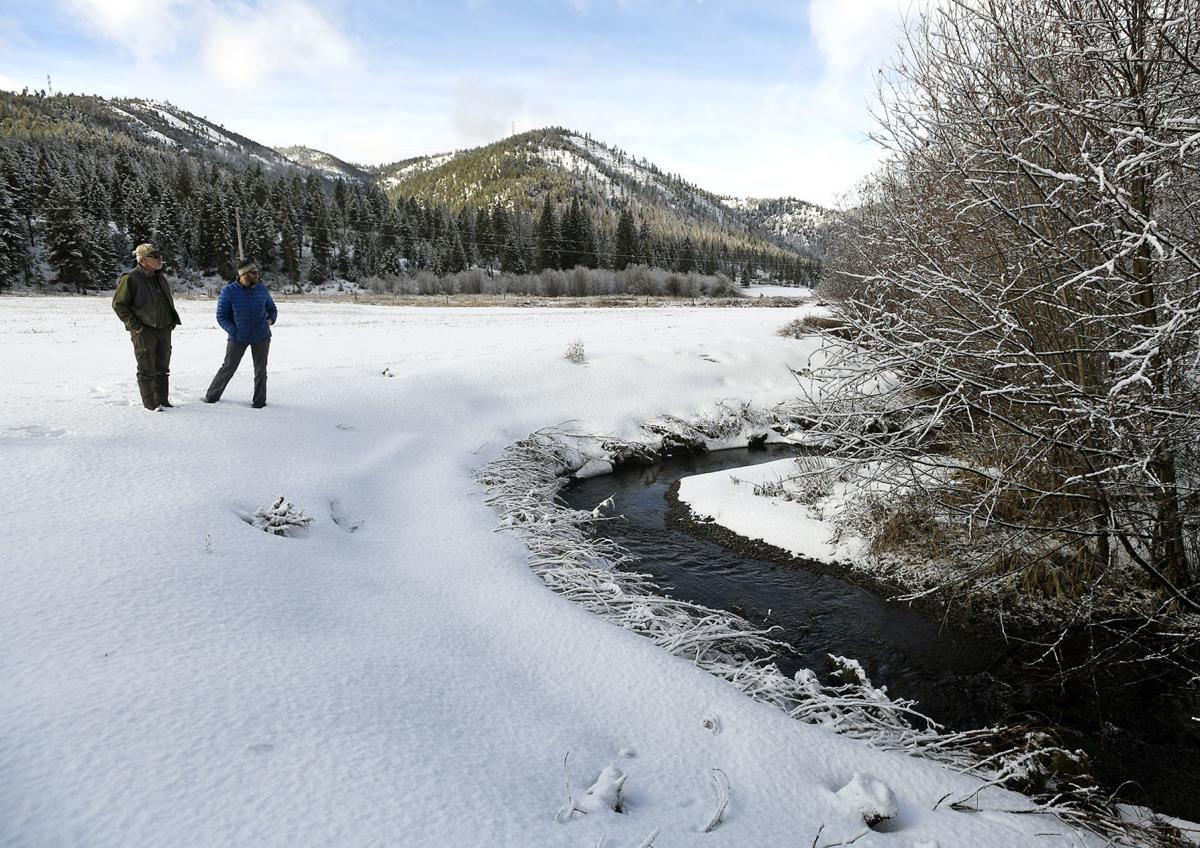 Ranch owner Denny Anderson, left, and Jed Whiteley, project manager and monitoring coordinator for the Clark Fork Coalition, look over a section of Miller Creek last week that was restored in 2019. The creek used to be a straight shot through the property. 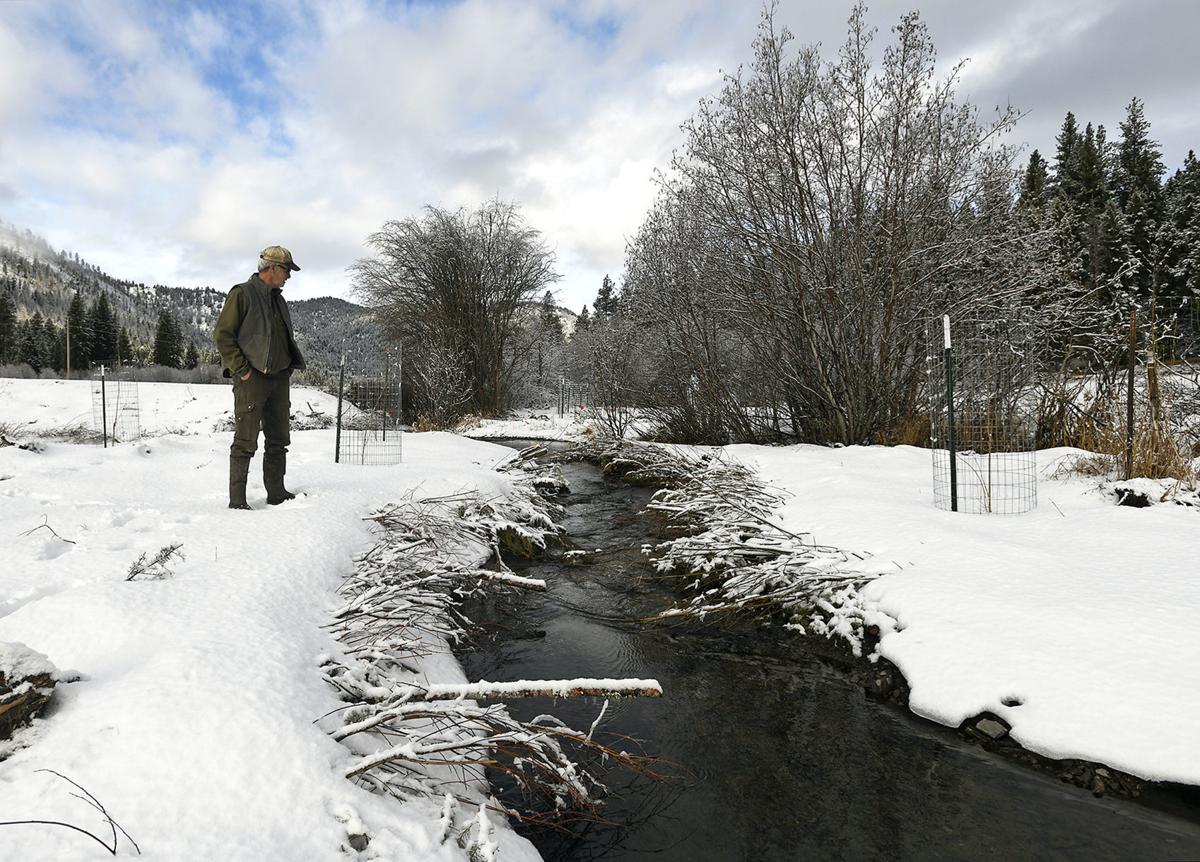 Denny Anderson stands by a stretch of Miller Creek that was part of a restoration project on his Spooner Creek Ranch. Anderson has seen increasingly warmer temperatures on the ranch where he's lived for 54 years, and the Miller Creek project will help protect the cold-running stream and the native fish in it.

This winter has been a mild one — especially by Denny Anderson’s standards.

“I’ve seen it 43 degrees below zero” he recalled, walking the 220-acre ranch above Missoula where he’s lived for 54 years. When he moved here, he remembered on a sunny morning last week, winters would bring at least three solid weeks at 20 degrees below.

Those fierce cold spells are gone. So are the snowdrifts that would cover Miller Creek each year, and his ability to predict, reliably, when the soil would be just right for planting hay, grass, oats, and alfalfa in the spring. “It’s patchy” now, he said. “Some years it’s real moist, some years it’s bone dry. I really believe that’s due to climate change. Nothing is standard anymore.”

As Anderson reflects on these changes, Missoula is bracing for a warmer climate in decades to come. The Climate Ready Missoula plan currently being drafted by the city, county and Climate Smart Missoula lists 29 climate change-adaptation goals for the area, and 67 strategies to reach them — all to get Missoula County ready for a temperature increase of 5 to 8 degrees Fahrenheit by the end of the century.

But climate change isn’t just a future trend; it's a current reality. Earlier this month, NASA scientists announced the past decade was the warmest on record. And according to the 2017 Montana Climate Assessment, Northwest Montana’s average annual temperatures increased by .39 degrees Fahrenheit every decade between 1950 and 2015 — from just under 40 degrees in 1950 to just under 42 in 2015.

That may not sound like much, but during that span, scientists and longtime residents have tracked plenty of shifts in the area’s air and water.

In 2002, the changes came together in dramatic fashion at Spooner Creek Ranch.

That year, Anderson recalled, one of the wooded hills cradling the property became a “wall of orange” as a wildfire drew close. “It was advancing pretty rapidly,” he said, and he and his wife, Becky, had a novel survival plan: both avid divers, they prepared “to jump in our pond with scuba tanks on.”

The wind shifted at the last minute, and the ranch was spared. But future blazes remain a concern. “I’m worried about fire this year. This year, we’re really worried, all of us, because of the conditions.”

It’s hard to say what the 2020 fire season will bring. While this year’s snowfall may seem like a dusting in the Missoula Valley, the overall snowpack is in line with the 1981-2010 average — and, in any event, research indicates that summer rainfall has far more influence on fire than winter snowpack. But greater Missoula is becoming more of a tinderbox, said Phil Higuera, an associate professor of fire ecology at the University of Montana.

“Wildfire activity has been increasing consistently since about the mid-eighties,” he said. “This decade-long or 30-plus-year trend of increasing fire activity across the Western U.S. and in the Northern Rockies ... is well-correlated with increasing temperatures in the summer and decreasing precipitation.”

This doesn’t mean that every fire is a product of climate change, explained one of Higuera’s colleagues at UM, Nick Silverman. A rise in temperature, he said, “ripples through the rest of all these really complicated interactions, like wildfire and drought and snow ... and that’s where it becomes more and more complicated to attribute these second-order effects to climate change.”

But the area has been trending towards more favorable fire conditions, he continued. “That combination in the summer of decreasing precipitation and increasing temperature, that lends itself very well to wildfire conditions, and we’ve seen that historically too.”

“2003 was a big year, and 2007 was a big year, and 2012 and 2015 (also were bad), and 2017 was our worst year so far,” said Sarah Coefield, an air quality specialist with the Missoula City-County Health department. “So it's not an every-year thing, but it has become a recurring scenario, and it's something that we don't expect to go away.”

It’s not just the forests that are taking more heat. The streams and rivers are, too.

While this year’s snowpack is in line with the most recent 30-year average, mountain snowpack has been trending down throughout the West since the 1950s — a trend Anderson has seen himself. “Denny, he tells me stories about when they had 12 feet of snow,” said his neighbor, Rellen Stewart.

“I’ve lived here since 2006. I’ve never seen anything like that.” Just a few inches encrusted their land on Wednesday morning. They still get heavy dumps, Anderson said — last year, the berms he plowed around his driveway reached the 12-foot mark. But “overall, yes, I’ve seen not as much snow over the last 50 years.”

What snow does fall eventually melts into Miller Creek, which snakes along the inside edge of his ranch on its 18-mile journey to the Bitterroot River. When the Clark Fork Coalition monitored water temperatures here in summer 2018, it recorded a high of just 54.5 degrees Fahrenheit.

“Around here, around Missoula, that’s very unusual,” he continued. “We're losing our snowpack earlier, or having reduced snowpack, and therefore having lower flows ... That's correlating directly to warmer stream temperatures.”

A 2017 study by the U.S. Forest Service found that streams in the western United States warmed at a rate of .178 degrees Celsius per decade from 1976 to 2015. And that trend spells trouble for the area’s aquatic icons.

“The waters are beginning to warm for bull trout. They’re not doing so well,” said Lisa Eby, a professor of equatic ecology at UM. As native bull trout retreat, non-native varieties are taking their place. “We’re seeing decreased bull trout numbers and increased brown trout numbers across many of the rivers and through many of the lower tributaries.”

In a study of 280 sites around the Bitterroot Basin, Eby and her colleagues found that, from the early 1990s through the early 2010s, bull trout experienced a 9 percent reduction in occupancy. Jason Lindstrom, a fisheries biologist with Montana Fish, Wildlife and Parks, is seeing the change. “Middle-elevation streams that have traditionally been bull trout habitats, cutthroat trout habitats, we’ve just seen them warming,” he said. “We’ve seen non-native species.”

As this trend continues, one stronghold of Montana’s native fish could be the Spooner Creek Ranch.

“There is good cold water up here year round,” the Clark Fork Coalition’s Whiteley explained. “It's a place that up here, 30 years from now there still should be cutthroat trout here, whereas other areas, they might not be able to make it anymore.”

It’s one of the reasons the Coalition selected this stretch of Miller Creek for a $160,000 restoration project last summer, planting trees along its banks and re-shaping the corridor to better suit the needs of native species. “It used to be a straight shot” through, Anderson recalled. “Now, it’s meandering.”

In recent years, he’s also put the property under a conservation easement held by the Rocky Mountain Elk Foundation, and worked with the Montana Department of Natural Resources and Conservation to mitigate wildfire fuels around his property. Anderson hasn’t just had a window on Missoula’s environmental history; he’s also shaping its future. In an age of rising temperatures and unpredictable weather, the Climate Ready Missoula plan calls on residents and government to adapt.

And up on Miller Creek, Denny Anderson and Rellen Stewart will keep tabs on how their own efforts are faring.

“I think both Denny and I, we’re pretty committed to leaving this place better than we found it,” Stewart said. “We’ve made this creek a much better place.”

Earth’s climate is heating up — and a new plan aims to get the Missoula area ready.

From educating consumers about solar power to providing air filters to kids and the elderly, Amy Cilimburg and her tiny nonprofit are focused …

The University of Montana Police Department announced Sunday it has identified subjects who were the focus of a timely warning issued one day earlier and do not believe the community is threatened.

A Montana game farm is under quarantine after an elk tested positive for chronic wasting disease, the state Department of Livestock reported.

In Western Montana, the Clark Fork Coalition repairs a creek to create a native trout sanctuary.

The latest draft of the Climate Ready Missoula Plan adds several new strategies for adapting the region for climate change — and says a reliable stream of public and private dollars will be needed to pay for them.

Warm winter wraps up in Missoula

With less than three weeks of winter left, the latest numbers show this season was a balmy one.

Planning Board sends climate plan on to Missoula city, county

After years of preparation, the Climate Ready Missoula Plan is heading for a vote.

Snowpack normal for May as signs of drought emerge

The COVID-19 pandemic has driven Americans to seek sanity and social distance in the outdoors fresh air. But in Montana, that outside air may …

The Clark Fork Coalition headed the restoration on Miller Creek, re-shaping the stream into a meander, reinforcing banks and planting willows and other native plants and trees. The creek should hold more places for native trout to survive and hopefully produce beaver dams.

Ranch owner Denny Anderson, left, and Jed Whiteley, project manager and monitoring coordinator for the Clark Fork Coalition, look over a section of Miller Creek last week that was restored in 2019. The creek used to be a straight shot through the property.

Denny Anderson stands by a stretch of Miller Creek that was part of a restoration project on his Spooner Creek Ranch. Anderson has seen increasingly warmer temperatures on the ranch where he's lived for 54 years, and the Miller Creek project will help protect the cold-running stream and the native fish in it.