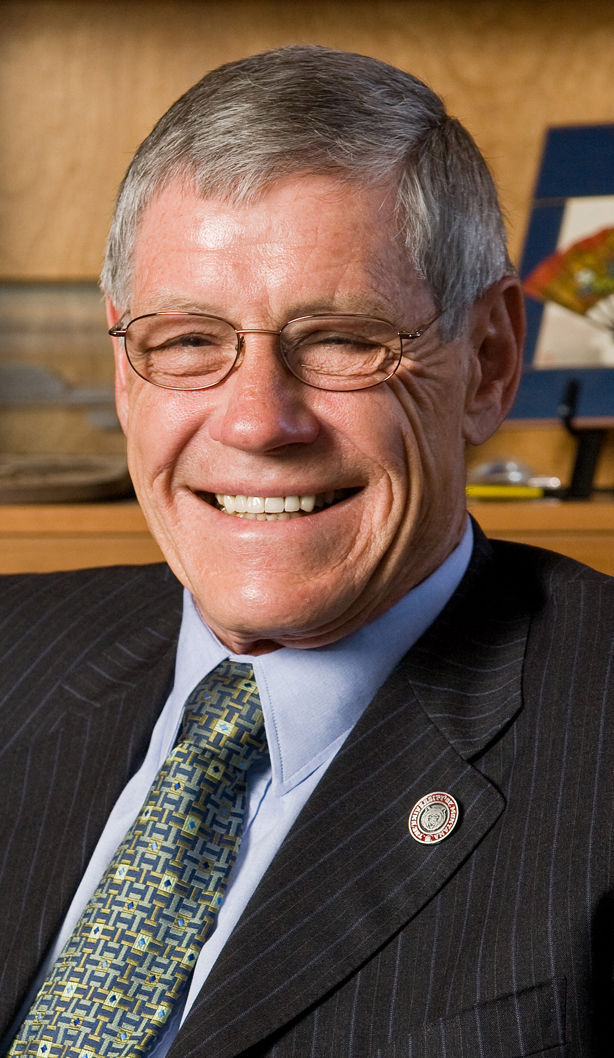 MISSOULA – George M. Dennison, the longest-serving president of The University of Montana and one of the most impactful educators in the history of the state, died Tuesday, Jan. 3, 2017, due to complications from non-Hodgkin lymphoma. He was 81.

George was born Aug. 11, 1935, in Buffalo Hart, Illinois, to Earl and Irene Dennison. He was the second-oldest of six brothers, and the family moved to Montana in 1936. George grew up in the Kila area and graduated from Flathead County High School in 1953. He served in the U.S. Navy from 1953 to 1957.

George first dabbled in higher education at Custer County Junior College in Miles City, where he earned an associate of arts degree in 1960. He then began a lengthy relationship with UM in Missoula, where he earned a B.A. in history with highest honors in 1962 and a history master’s degree in 1963. He earned his Ph.D. in history from the University of Washington in 1967.

George launched his career as a historian and college educator from 1967 to 1969 at the University of Arkansas and the University of Washington. He then worked 18 years at Colorado State University in positions ranging from assistant professor to associate academic vice president and director of admissions and records. He burnished his administrative credentials from 1987 to 1990 as provost and vice president for academic affairs at Western Michigan University. After a national search, he was inaugurated as the 16th UM president on Aug. 15, 1990. He would lead his alma mater for two decades.

His tenure as president was a time of sustained growth and accomplishment for UM. Student enrollment increased nearly 50 percent, from 10,055 in 1990 to nearly 15,000 in 2009. Always an advocate for Native American inclusivity, he worked to grow Native enrollment from 239 to 569. He also built a culture of philanthropy across campus and among UM alumni and friends, increasing the campus endowment from $17.3 million to $120 million. He completed two fundraising campaigns for buildings, scholarships and other campus needs. The second, the “Invest in Discovery” campaign from 2002 to 2007, at the time was the most successful fundraising campaign ever launched by a Montana nonprofit. In addition, George started Partnering for Student Success, an initiative to increase retention and graduation rates by better preparing and supporting students. He also led the effort to create the Montana Campus Compact, a statewide coalition to further campus-based public service, founded the Montana Commission on Community Service and was a charter signer of the American Colleges and University Presidents Climate Commitment.

Some jokingly accused George of having an “edifice complex” for all the new construction on campus during his tenure. The University added 1.3 million square feet, which equates to 20 percent more total usable space. Building projects completed include the Davidson Honors College, the Gallagher Business Building, Pantzer Hall, the Todd Building, the Fitness and Recreation Center, Don Anderson Hall, the Phyllis J. Washington Education Center, The Payne Family Native American Center, three expansions of Washington-Grizzly Stadium and several renovations of existing buildings. In May 2012, the University Theatre was renamed the George and Jane Dennison Theatre in recognition of their many contributions to UM.

In 1999, George was awarded the Leadership Award from the Council for Advancement and Support of Education. He was Montana Ambassadors Educator of the Year in 2005 and earned the Montana Excellence in Leadership Award in 2007. Universities in Kyrgyzstan and Tajikistan presented him honorary doctorates, and he earned the Governor’s Humanities Award in 2009. UM presented him with a Distinguished Alumnus Award in 2013. Additionally, George served on the board of directors at the International Heart Institute and the board of directors at the Montana Historical Society. Blackfeet Chief Earl Old Person gave George the name “Fast Buffalo Horse” for his service to Native students.

His extensive curriculum vitae mentions scores of presentations, research reports, publications and special administrative assignments. He is the author of two books: “The Dorr War: Republicanism on Trial, 1831-1861,” which was runner-up for the Frederick Jackson Turner Award in 1976, and “Montana’s Pioneer Naturalist: Morton J. Elrod,” which was published this past September by the University of Oklahoma Press.

At UM he was known for his unique lifestyle: running 4 miles before sunrise, arriving first on campus to work long days and only eating one meal in the evening. He would drink massive amounts of coffee and snack during meetings. He didn’t believe in driving slowly, and he was passionate about Grizzly Athletics and golf.

After retiring from the UM presidency, George worked for the University’s O’Connor Center for the Rocky Mountain West. He also returned to his roots as a historian, researching and working on a history of UM.

In a farewell message he penned in UM’s Montanan magazine, George wrote, “I have enjoyed every moment of the time I have had the privilege to serve as president of my alma mater.”

George is preceded in death by his parents, Earl and Irene Dennison, and two brothers Wayne and Andrew Dennison. George is survived by his wife, Jane, two sons and daughters-in-law: Robert and Diann and Rick and Shannon, seven grandchildren and one great-grandson. Additionally he is survived by three brothers and their wives: Richard and Linda Dennison (Missoula), Jim and Bea Dennison (Kalispell), and Tim and Dee Dennison (Seely Lake).

A celebration of George’s life will be held in May 2017. For those wishing to make a contribution in George’s honor, the family suggests The University of Montana Foundation to support renovations for the upper balcony seating areas in the George and Jane Dennison Theatre or a donation to the charitable organization of choice.