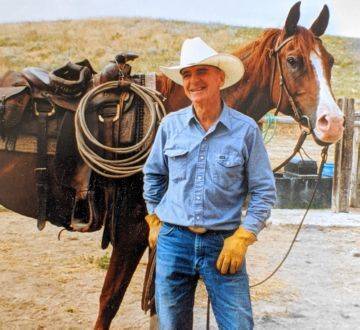 Tom Ford of Hamilton, MT passed away November 21st surrounded by family. Born to John and Alene Ford April 28th, 1925 in Salt Lake City, Utah, Tom was preceded in death by wife Bette, sister Joanne, and mother and father. Surviving children include John, Alan, Julie, Suzanne, Tom (JR), and grandchildren John Walker and Cameron Ford. All have special memories of Tom and will miss him very much.

Tom's family moved to Hamilton in 1929 when his father became manager of the JC Penny Store. Tom enjoyed growing up in Montana and reflected fondly on a time when “there were fewer fences and you could ride for miles without coming to a gate”. Growing up during The Depression, Tom recalled Hamilton as place where “people knew you and would lend a hand if they could”.

Tom attended schools in Hamilton before graduating high school at St Thomas Military Academy in 1943. Following graduation, Tom enlisted in the Army Air Corp, volunteering for an aerial combat assignment on a B-17 Bomber during WWII. Tom eventually completed 35 missions as Bombardier and Waist Gunner in the 15th Air Force based out of Foggia, Italy.

Following the war, Tom graduated with a BA in History from U of M in 1949. That same year he met and the love of his life, Bette Basye, on a ski trip. Tom and Bette married and were together 57 years until Bette's passing in 2006. Tom and Bette raised a big family and loved sharing their home with friends over dinner parties ripe with discussions of politics and current events. Tom loved his family and reflected that it “wasn't the size of a man's wallet that mattered but the strength and health of his family.”

Tom wanted to make his family's home in the Bitterroot and went into business with his father who had established Ford's Federated Store in 1947. From 1949 on Tom worked at Ford's continuously six days a week until 2015, serving multiple generations of families clothing needs- especially shoes and boots! Tom was a businessman and advocate for a strong and vibrant “Main Street America” and was active in making downtown Hamilton what it is today.

Tom loved Notre Dame Football, backcountry horse trips, skiing, and flyfishing Sawtooth creek. Tom's favorite place was in the saddle atop a horse. Sundays were a sacred and cherished time to saddle up and “go the hills”. Tom's love of horses likely influenced his desire to preserve the Bitterroot, making him a conservationist before it was popular.

Tom observed a strong Catholic faith and was a lifetime supporter and parishioner of Saint Francis Church, attending mass weekly until just before his passing.

A family memorial will be scheduled for a later date.