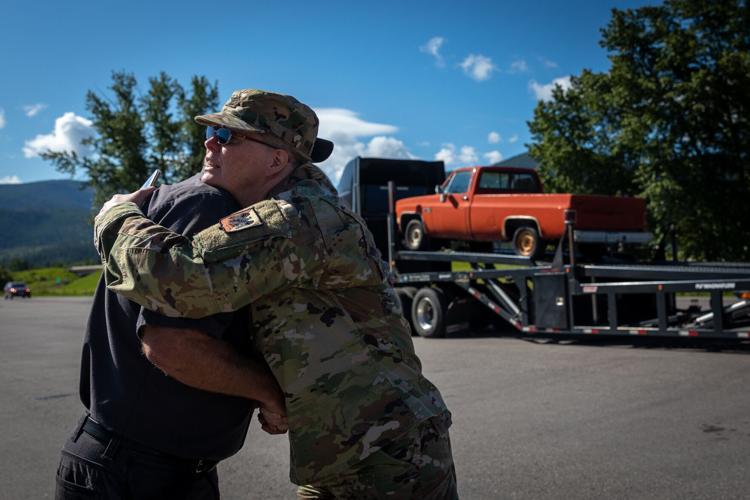 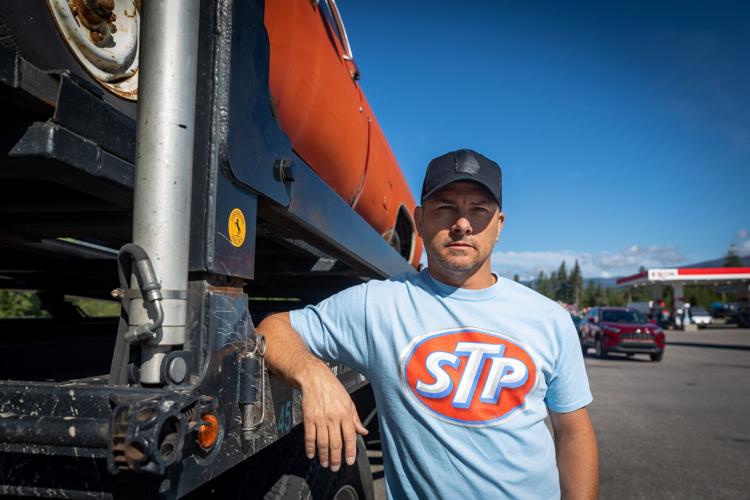 Jared Ashley, chief executive officer with 16 Creative and a U.S. Navy veteran, stands next to his late friend Jeff “Ozzy” Otzwirk’s 1982 Chevy Scottsdale pickup atop a semi at the Silver Dollar Saloon on Tuesday, June 21, 2022. Ashley helped organize an escort for Ozzy’s truck in efforts to highlight the ongoing veteran mental health epidemic. 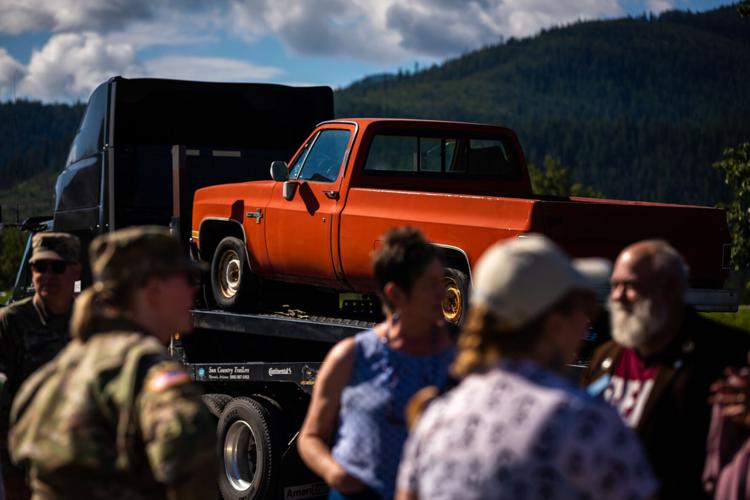 Jeffrey Otzwirk’s truck was restored with the help from Petty’s Garage, a North Carolina speed shop. The truck was escorted by the Mineral County Sheriff’s Department to Missoula in memory of Otzwirk, who died by suicide in 1999. 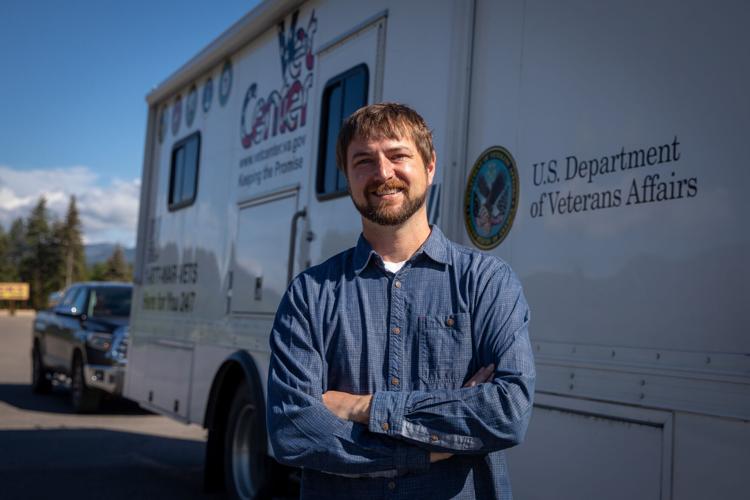 Anton Johnson, an Afghanistan veteran and outreach specialist through Missoula’s Veteran Center, drove a mobile Vet Center clinic to Haugan for the memorial. The clinic gives the general public information about mental health and resources for veterans.

HAUGAN — Mary Devine remembers the exact location of her family’s past home in the town of Haugan — right where the Exxon gas station now stands next to the Silver Dollar Saloon off of I-90.

That's where her brother Jeff "Ozzy" Otzwirk parked his red 1983 Chevrolet Scottsdale pickup in the driveway. For as long as she can remember, that was Otzwirk’s favorite possession. Now its legacy, along with her brother’s, lives on to this day even after Otzwirk’s passing by suicide in 1999.

Devine came back to western Montana to attend an escort and procession at Haugan’s Silver Dollar Saloon honoring her late brother, who was a U.S. Navy sailor. Dressed in her own uniform as a Nevada National Guard officer, Devine remembers her childhood growing up with her brother and other siblings where their home used to be.

“He was my little brother," Devine said. "My sister Lynn and I used to babysit Jeff (at that house) when he was six weeks old. We were a blended family after our parents remarried, but we always treated each other like family."

On Tuesday, Ozzy's family, friends and fellow military veterans gathered to memorialize him by sending his restored pickup on a mission of support for other military service members struggling with mental distress.

Born in Missoula on Sept. 20, 1976, and raised in Haugan, Otzwirk served as a machinist mate in the United States Navy after leaving Haugan back in 1996. Most of that was aboard the USS Independence, stationed in Yokosuka, Japan.

After the Navy decommissioned the ship in 1998, Otzwirk and his crew transferred to the aircraft carrier USS Kitty Hawk. Throughout his time with the Navy, Otzwirk made what appeared to be lifelong friendships with the rest of his shipmates, particularly sailor Jared Ashley.

Otzwirk died by suicide on Sept. 18, 1999, after serving with the Navy for more than three years. He left behind his family and that red Chevy pickup back in Haugan.

“Jeff was an all-in kind of a guy,” Devine said. "He was an athlete, an outdoorsman, and a friend. He was a big and loving soul. He loved his family, and we didn’t see this coming. The loss of Jeff was and is devastating.”

Devine will always remember his brother back when they were kids and as younger adults. She said Otzwirk was very active at a young age. He participated in Montana’s regional Junior Olympics in the early '90s. At the time, college wasn’t necessarily his passion, Devine said, which is why he decided to enroll in the Navy “to see something else.”

“He knew he wanted to get some skills and see the world, and so he chose military service and I applaud him for it,” Devine said.

The tour highlights suicide awareness and acts as a microphone for other service members across the country who struggle or have struggled with mental health serving their country.

Ashley, of Evans, Georgia, first reached out to Otzwirk's sister and other family members back in 2018 interested in telling his story and highlighting the hardships veterans face after leaving the military. He wanted to get Otzwirk's truck restored to honor her brother and the rest of his shipmates.

“The military has a unique way of pulling different types of folks together as a unit, and with that mentality I think that’s why this (tour) will be successful,” Ashley said. “In the end, the truck is just a truck, but when you pull all the resources and people together who played a major role in Ozzy’s life, that’s when it can make a difference.”

The project wasn’t all about “restoring a truck and making it pretty,” but “it’s about telling the story, Jeff’s story,” he said.

Ashley partnered with Petty’s Garage because of their passion and affiliation with veterans' causes, and it just “made sense” for him.

“This restoration is about telling the story and educating the public about the trials and tribulations that our veterans and service members deal with everyday,” Ashley said. “Being here at the Haugan Silver Dollar Saloon where (he and his) family grew up is also what makes this special 23 years later. The whole community still suffers from his loss.”

Anton Johnson stood next to a mobile Vet Center parked behind the black semi-truck carrying Otzwirk's red Chevy pickup. Johnson, who served as a combat engineer in Afghanistan from 2004 to 2005, is the outreach specialist through Missoula’s Vet Center.

He made the drive up to Haugan in the mobile vet center to offer veterans and the general public information about how to address suicide awareness.

Through his work, Johnson has helped Montana veterans get connected with readjustment counseling services as they immerse themselves back in society after years of serving in the armed forces.

“Vet centers were created to help Vietnam veterans as they returned home in the late '70s,” Johnson said. “A lot of times Vietnam veterans didn’t want to (get help) from the government that sent them over in the first place, so when they formed this program it was just veterans helping veterans.”

Johnson said these centers have expanded their services throughout all 50 states and opened up eligibility for all eras of veterans. He said eligibility is broad and takes in anybody who served in a combat or hostility zone, experienced military sexual trauma, loss of a family member while in the service and other mental health services.

“We’ve expanded these services because we’ve seen the need and the benefit it brings to our veterans,” Johnson said.

As Otzwirk's truck hit the road atop a semi-truck escorted by the Mineral County Sheriff’s Department, Ashley and Devine got into their respective cars to follow the truck’s escort making its way to Missoula as a beacon for other veterans in need.

“If this project can save and change lives, then it’s worth it,” Devine said.

The design and development process is anticipated to be completed in 2025. A construction date has not yet been set and will be determined by availability of funding.

Jared Ashley, chief executive officer with 16 Creative and a U.S. Navy veteran, stands next to his late friend Jeff “Ozzy” Otzwirk’s 1982 Chevy Scottsdale pickup atop a semi at the Silver Dollar Saloon on Tuesday, June 21, 2022. Ashley helped organize an escort for Ozzy’s truck in efforts to highlight the ongoing veteran mental health epidemic.

Jeffrey Otzwirk’s truck was restored with the help from Petty’s Garage, a North Carolina speed shop. The truck was escorted by the Mineral County Sheriff’s Department to Missoula in memory of Otzwirk, who died by suicide in 1999.

Anton Johnson, an Afghanistan veteran and outreach specialist through Missoula’s Veteran Center, drove a mobile Vet Center clinic to Haugan for the memorial. The clinic gives the general public information about mental health and resources for veterans.