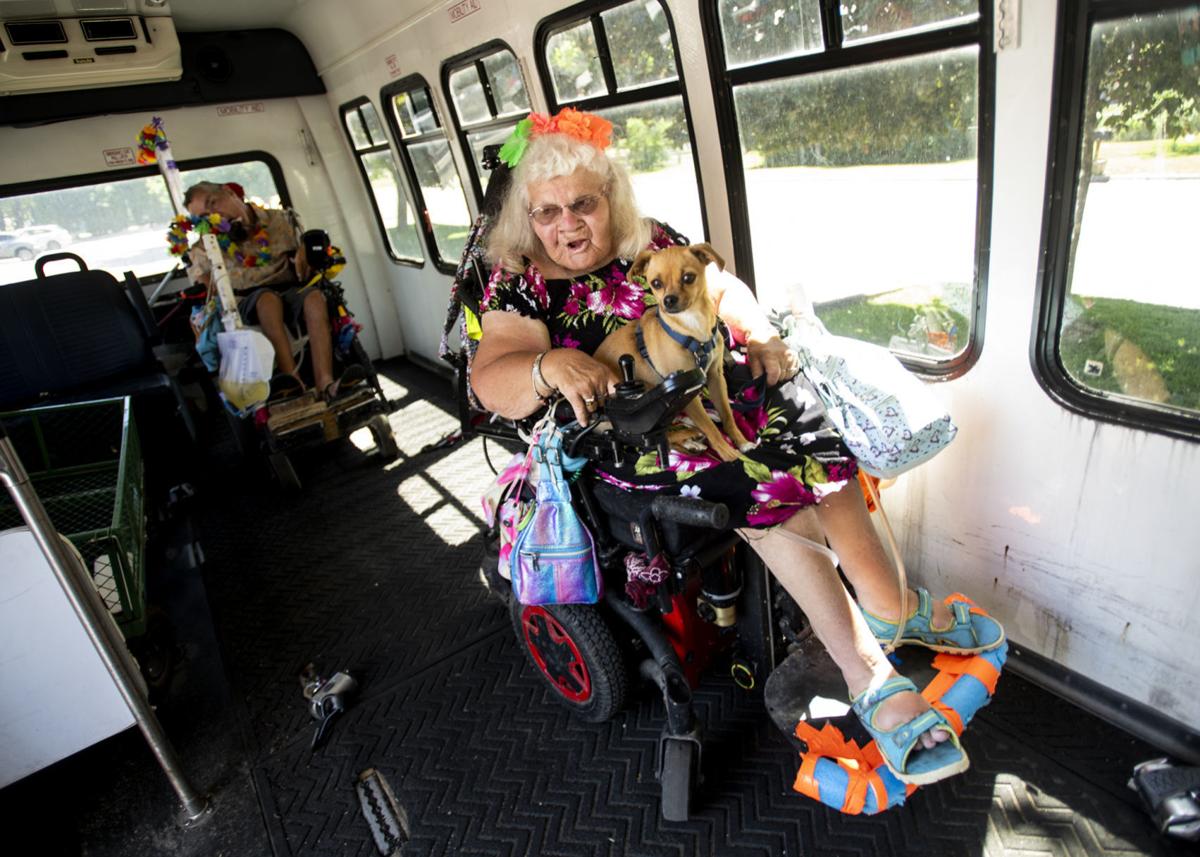 Linda, right, and Pat Cobban had their 40th wedding anniversary on Thursday last week. The Cobbans, a couple with developmental disabilities, were married at Community Medical Center in 1980, and have been living alone in an apartment on Turner Street since 2002. 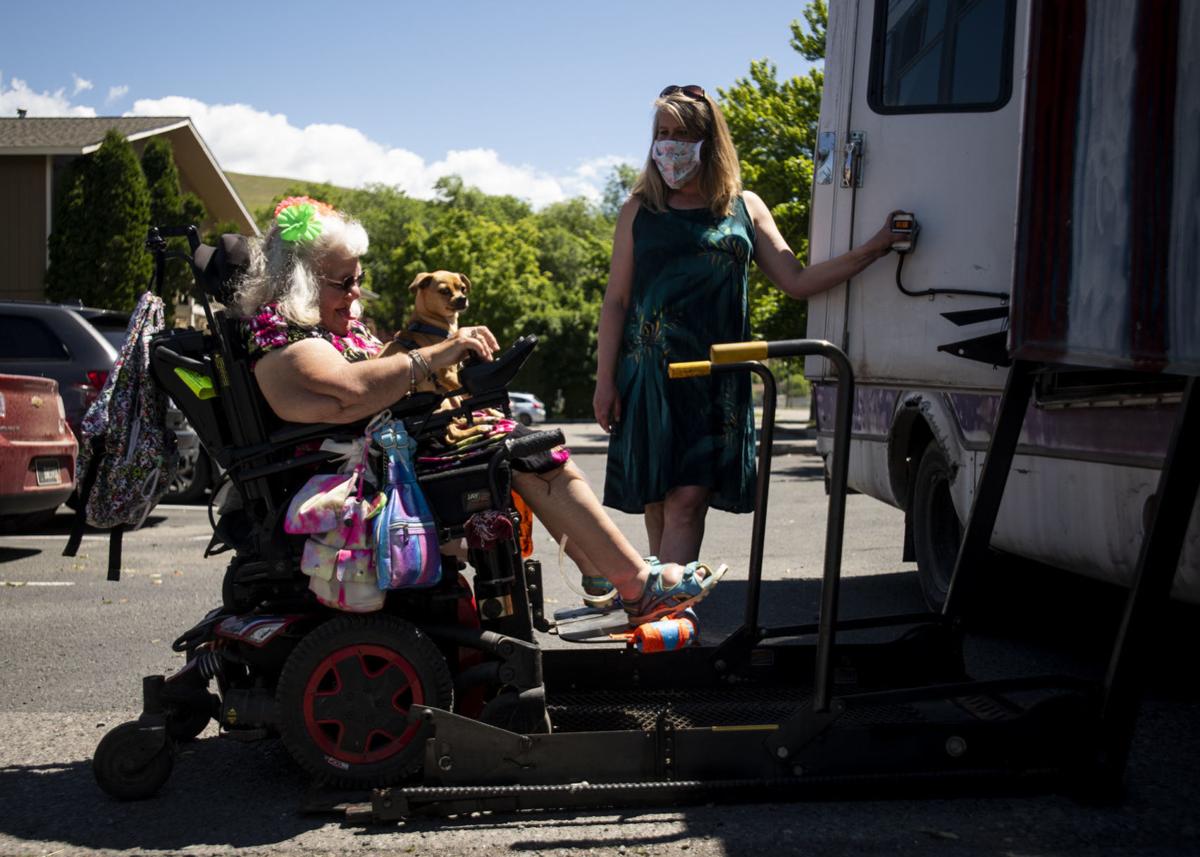 Linda Cobban and her 2-year-old Shih Tzu-Chihuahua mix, Gerald, ride the lift onto Pat and Linda's Rainbow Boat, the Cobbans' bus, which was purchased secondhand from Opportunity Resources Inc. 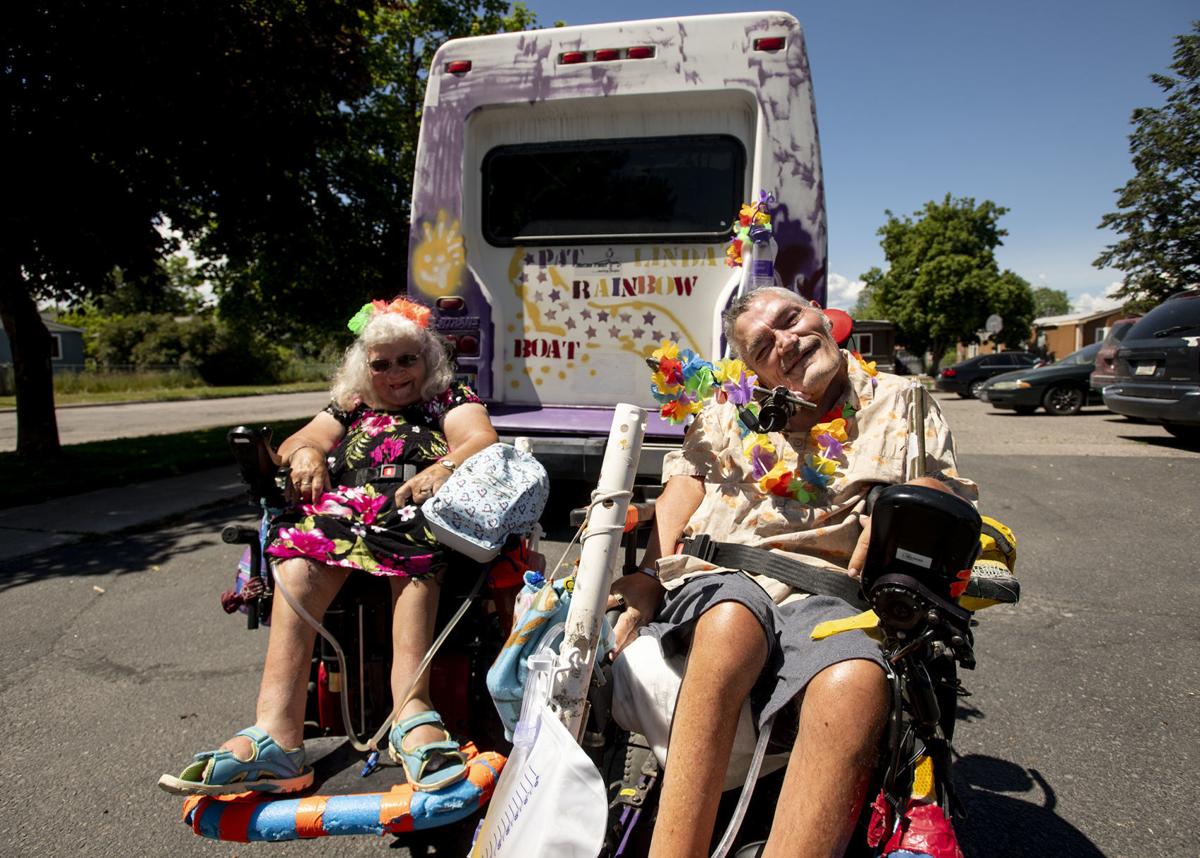 Years ago, Linda spoke with Pat's family about providing care for her counterpart. She told them she would never let Pat go hungry.

Pat and Linda Cobban are still inseparable after 40 years of marriage.

Both born with cerebral palsy, they overcame the challenge of battling the prejudices of those who thought people like them shouldn’t be allowed to get married or be able to live in apartments together. Now, both in their 60s, the couple lives in Missoula’s Northside neighborhood and still gallivants all over town as often as they can.

On Thursday, they got a surprise wedding anniversary party thrown by friends who drove by and waved. The party was organized by Opportunity Resources, Inc., Montana’s largest disability-focused nonprofit organization. Since 1955, the organization has assisted tens of thousands of people with disabilities with meaningful work opportunities and programs. And sometimes, they supply cupcakes for 40th wedding anniversaries.

If you’ve been in Missoula long enough, you’ve probably seen the Cobbans cruising around town or taking in music at Out To Lunch at Caras Park. They have a giant handicapped accessible bus, painted in wild colors, called Pat and Linda’s Rainbow Boat. It's hard to miss.

Linda, with her firecracker personality and infectious laugh, reminisced on Thursday about the long road they’ve taken together.

She moved to Missoula from Billings, and Pat’s from Clinton originally. They met at the Montana Development Center in Boulder in 1965 when they were both children, and they hit it off right away. They were separated for years while Linda lived with a foster family and Pat went to a nursing home in Hot Springs, but they were reunited with the help of friends and a social worker. Not wanting the “commitment ceremony” that many people with disabilities have in lieu of an official marriage, Linda and Pat were determined to not only get married but live on their own.

“We were one of the first ones they moved out of the nursing home,” Linda explained.

A wedding ceremony was held at the Community Rehabilitation Center on June 25, 1980.

“He wore a tie,” Linda recalls of her husband, smiling. They had a honeymoon organized by friends in Hot Springs.

The Cobbans take care of themselves for the most part, including at night, and Linda Cobban still fills and cleans her husband’s feeding tube. But they also have a huge support network of friends they’ve made throughout their lives. They also get some support from staff at Opportunity Resources, like Sheila Thompson, the director of residential services, and Tanya Williams, their coordinator. Other staff members take them to medical appointments, and they’ve traveled all over the country.

“He drank champagne, I drank beer,” Linda recalled of the Butte trip, grinning.

Pat Cobban worked on the Clean Team, an Opportunity Resources crew that helps keep downtown free of litter. They often use the Northside pedestrian bridge over the railroad tracks, which Linda calls the “railroad bridge”.

When asked if it’s easy for people in wheelchairs to get around Missoula, Linda says “that’s a yes and a no.”

“The church is very supportive of them,” Williams said. “If their van breaks down, they help out.”

Thompson said it’s amazing how many friends the Cobbans have in town.

“They have a very large support network that they created themselves,” she said. “It wasn’t anybody else but them. Some staff take them to medical appointments. But a lot of things they do on their own. A lot.”

The $54 million Villagio Apartments in Missoula's Northside neighborhood will have 200 units able to accommodate 769 low- and moderate-income people.

"I wanted to get involved and see where my food came from and just see the whole entire process from breeding to watching ‘em birth, watching ‘em grow up to seeing ‘em get cut up. I think it’s a wild process.”

City Club Missoula’s monthly forum June 8 via Zoom will tackle Tax Increment Financing, the subject of much debate in Missoula.

“Once we see how racism was developed, it gives us a better understanding of how to dismantle it.”

A federal appeals court upheld a judge's decision to award more than $3 million to a Montana worker who sued BNSF Railway Co. for wrongful termination.

A 41-year-old woman is jailed after her uncle died Friday en route to the hospital with blunt force injuries to his head.

About 30 businesses in Missoula received $1 million or more.

Linda, right, and Pat Cobban had their 40th wedding anniversary on Thursday last week. The Cobbans, a couple with developmental disabilities, were married at Community Medical Center in 1980, and have been living alone in an apartment on Turner Street since 2002.

Linda Cobban and her 2-year-old Shih Tzu-Chihuahua mix, Gerald, ride the lift onto Pat and Linda's Rainbow Boat, the Cobbans' bus, which was purchased secondhand from Opportunity Resources Inc.

Years ago, Linda spoke with Pat's family about providing care for her counterpart. She told them she would never let Pat go hungry.