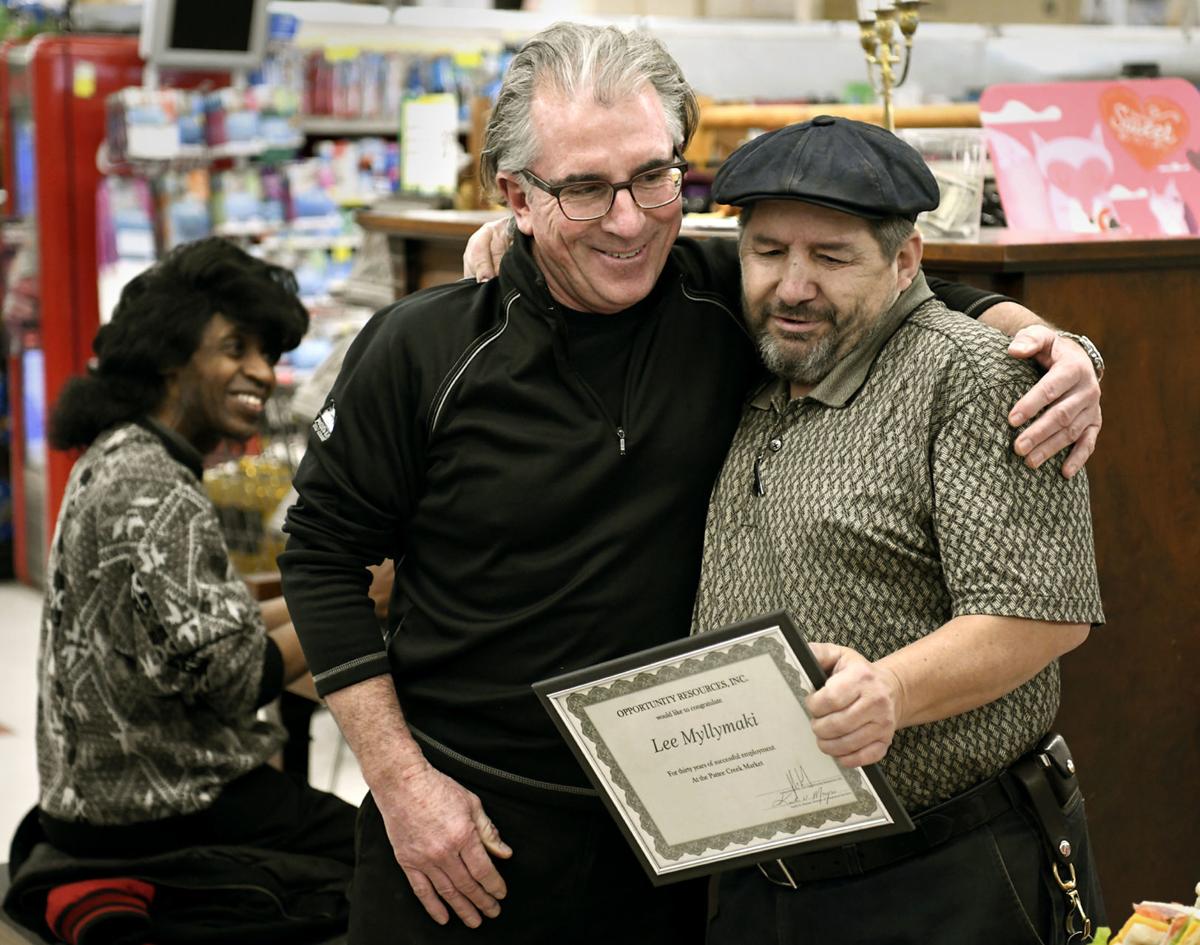 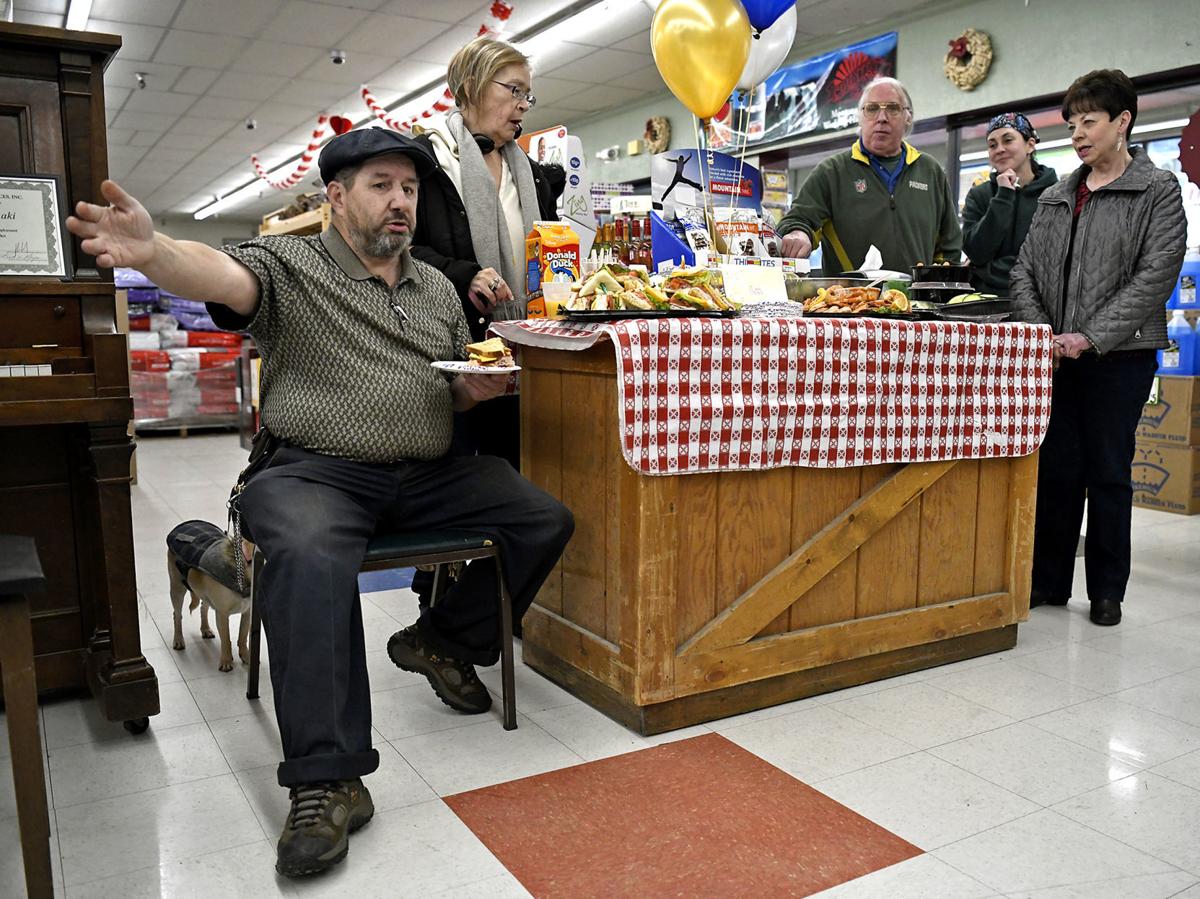 Lee Myllymaki, left, tells stories from his three decades of working at the store during his retirement party Friday. Myllymaki rode his bike to work every day, and only called in sick twice, each time because he got hit on his bike.

Down to his last day on the job, Lee Myllymaki had to make sure everything was just right.

“That’s where all the goodies should be,” he said, pointing to the piano near the entrance of Pattee Creek Market. “Me and the music make the party.”

So his colleagues and friends moved the cake and hors d'oeuvres beside the piano, ensuring that Myllymaki could celebrate his retirement with the music he loved.

Retirement after 30 years would earn a sendoff celebration at most employers. But this achievement was an especially high one for Myllymaki. Despite a developmental disability, he “always shows up to work and takes pride in what he does,” says Jim Edwards, Pattee Creek’s owner.

Edwards has worked with Myllymaki almost as long as he’s been in business. In 1989, shortly after opening Bi-Lo Foods, “we needed a cleanup kid in the meat department,” he remembered.

“We said, ‘Maybe it would work out’ and we gave him a shot,” Edwards remembered.

Myllymaki spent the next three decades keeping the store’s meat department clean, staying through Bi-Lo Foods’s 1996 move to Higgins Avenue and rebranding as Pattee Creek Market. Opportunity Resources does help train and assist workers it places with local businesses, but, Pearson said, Myllymaki “hasn’t received any supports from here for a long time. … It’s a good employer and he’s a good worker, so it’s a good match.”

“Lee definitely is mentally challenged in certain areas,” said Edwards. He’s walked in to find Myllymaki’s bike in the meat shop, and sometimes had to get things he “fixed” re-repaired.

He’s also had to be accommodating. “He just comes in. We let him work at his own pace. The meat cleanup takes an hour. We allow Lee two hours.”

But he’s seen plenty of strengths elsewhere. “He’s got a brilliant mind” for music, Edwards said. “He can rattle off who sings what. It’s almost sometimes amazing.” And “coming to work, he definitely can carry on a great conversation.”

And above all, Edwards said, “Lee, he really takes his job seriously.”

“Bicycling and working at the Pattee Creek are his two big things,” said Edwards. “He’s always shown up to work, rides his bike to work … even when it’s 20 below.”

The only two times he can ever remember Myllymaki calling in sick were when he got hit by cars. Hardly deterred, Myllymaki’s kept pedaling through all kinds of weather, and has become store employees’ go-to bike repairman. “We’ll probably have to call him in on that,” Edwards said.

On Friday, Edwards set out sandwiches, cake and other goodies for Myllymaki’s friends and longtime colleagues. On hand was Pearson, the Opportunity Resources employee who launched his career 30 years ago.

“I’m proud of you,” she said, giving him a hug, to which Myllymaki replied, “You put me here.”

Gathered around the store’s piano Friday afternoon, she and the party’s other guests listened to Myllymaki reminisce about his vacations to Las Vegas — on a bus, bike in tow — and share his encyclopedic knowledge of music and Pattee Creek Market, including the time a fan caught fire and cut power to the building, a memory that escaped even Edwards.

He also broke out his deadpan sense of humor. Asked why he was retiring at 57, rather than wait until 62, he said, “I had enough of Jim and Dave” Diemer, his direct supervisor. Both took the joke in good stride.

His favorite part of working at Pattee Creek, he said, had been “meeting all different customers and getting to know all the employees …. And, the other thing, knowing that everyone appreciated the business that I’ve done here.”

What will he do now that he’s retired? “Too early to say yet,” he said, “because I was still thinking about work.

“I just have to get into where my mind won’t think about that. It’s going to slowly evolve, what’s going to happen with me.”

Lee Myllymaki, left, tells stories from his three decades of working at the store during his retirement party Friday. Myllymaki rode his bike to work every day, and only called in sick twice, each time because he got hit on his bike.