A giant piece of telecommunications equipment, painted illegally in the dead of night, then torn down and stored in pieces by residents for decades, is an unlikely candidate for an iconic slice of local history and now public art.

Yet the efforts of locals bore out last week as a crew pieced together the Missoula peace sign that once stood on the North Hills in its new home behind the Jeannette Rankin Peace Center.

The sign was both iconic and divisive — some thought it signified the city’s character, others derided it as a countercultural symbol that belittled veterans. Many believed it obstructed a nice view of the hills.

Missoula's gone but not forgotten landmarks

Jim Parker, a local resident who’s helped with the effort to preserve and install the sign, figures “it’s gotta be one of the biggest art installations in Missoula.”

Painting in the dark

The first marks on this canvas were made in 1983. The tower, owned by the now-defunct company US West, was targeted for graffiti by an informal group who dubbed themselves the Northside Liberation Front, although it wasn’t an organized outfit with meetings or an agenda.

Butch “Lawrence” Turk, one of the original sign painters, said their overnight mission didn’t have any longevity in mind, either.

“How do you imagine that one night’s act of vandalism is going to become a city’s institution?” he said. “No, we had no idea how long it would last, what US West would do about it, whether we’d bother to go back up and fix it.”

The choice of symbol was broad-minded, too.

“There were just six of us and the intent was to beautify an ugly piece of metal with something depicting our values,” Turk said.

They’d discussed other ideas (an anarchy circle or an ecology sign) but a circle with a few extra lines was both “aesthetically and politically the best thing we could pull off,” he said.

As a bonus, it would be legible from town and was simple enough for them to paint after hours without much in the way of proper equipment. The original color scheme was green, to fit the aesthetics of the hillside, but now a patchwork of layers of various ages overlap like a quilt.

Too far up the hill to bring ladders, they would clamber up the back of the sign, which is roughly 24 feet high itself and positioned 10 feet off the ground. They’d suspend someone from a rope, although none were climbers. It was less dangerous than uncomfortable for the person lowered, he said. For later missions, they recruited some rock climbers.

It grew organically from there, with people from all walks of life participating, often in different groups. Turk recalled that after US West painted over it the first time, another group of painters put up a “skinny, scraggly, ugly red peace sign” and he was “thrilled” when the company whitewashed it, “because it gave us the opportunity to go back up there and do it right.”

That cycle would repeat — the utility company would whitewash it, people would repaint it.

Once, the painters got caught in a storm and “they had to abandon ship, and it stayed half-painted for the whole winter,” Parker said.

Sometimes the peace graffiti was itself graffitied — with a question mark sign, or profanity. Old newspaper articles reference a crossed-out “cancel” sign or a swastika.

Seen now, the weather-worn reflective metal is coated with multiple layers of paint, an impressive number of bullet holes, and a light patina of faded red slurry dropped during a grass fire in 2000. Two pieces on the left side bear croppings of moss.

Now that it’s in place in a permanent home, they’re still discussing whether the surface should be protected with some sort of coating — on some pieces, strips of paint are peeling off, and there are concerns that the sign might get spray-painted, which quickly leads into a strange discussion about whether they should protect historical graffiti from fresh graffiti.

Unlike other pieces of public art, though, the sign has been repainted so many times that this is only “the latest version,” as Steve McArthur, one of the volunteer preservationists, calls it.

Starting back in 2001, people discussed ways to keep it or find a new place for it. None of the plans moved forward.

Mike Kadas, the mayor at the time, told the Missoulian that he didn’t view it as an icon. Nor did he want to push for it to stay in place, since it was like a “billboard.”

He “couldn’t imagine any circumstances under which we would allow anyone to put a sign on top of that hill today. That made taking it down seem pretty logical,” he said.

In May 2001, then-owner Qwest Communications had the sign removed, calling it a liability. The company left the pieces outside its building, and a group heard they were available for the taking before they’d be scrapped.

Bob Oaks, of the Northside Missoula Community Development Corp., and others delivered them via pickup to people who’d volunteered to hold on to them for safekeeping in their yards or gardens.

Parker has kept a diagram of the pieces and their locations as people had to pass them onto others as years drew on. Some sold their houses, others couldn’t make space for them anymore.

McArthur held onto one for years in his yard, in a corner near a fire pit — his wife was fine with it as long as you couldn’t see it from the house. Seen in isolation, they look more like building detritus than art or history. Bruck Micklus' piece was one of the most visible, stored outside Rockin’ Rudy’s.

The Peace Center held an auction to help pay for the costs of reconstruction. They also received funding from the Historical Museum at Fort Missoula.

On Aug. 19, a cool Thursday morning, Parker met with McArthur, Steve Dagger and their contractor, Dwight Thomas, at a house on Northside Phillips Street. The owners, Perry Gleissman and Pamela Diedrich, now live in Butte and rent out the house. They’d kept the central piece of the sign, the crux of the peace symbol, stowed away on the tree-covered east side of the yard, right up against the exterior wall of the house.

The four carefully set it atop a small trailer behind Thomas’ pickup and drove it to the alley behind the Peace Center, joining seven others stored in rows in the parking spaces.

Next up was a drive to the Blue Mountain trailhead, where another piece had been safeguarded by Mary Morrison. The team circled around the property until they located it lying in the grass near an outbuilding. Soon it was back with the others.

Their new final home is in the alley on the exterior concrete wall in the back of Gild Brewing. There were many potential locations floated over the years — this one by the Peace Center in a place where people could feel welcome to take a look (they expect many visitors). While public, it’s also discreet — the organizers liked the idea that it won't be in the face of anyone who takes offense to what it symbolizes.

On Friday, Aug. 27, Thomas’ crew and a crane arrived for the final assembly, as the pieces were reunited for the first time in 20 years.

Jacqueline Flewellen, the Peace Center director, thought the reassembly of the peace sign was a “succinct reminder” that the United States has been and is still involved in military conflicts around the world.

The bottom row of three were put in place on footings. Next, the crane lifted and dropped the next row, one by one and the shape of the peace symbol, with its wide circular paint marks, became more clear.

Parker and others were giddy at the site, as it’s now on a “new journey.”

Things to do: Dance, strings, country and a story of survival

A quick guide to arts and events around Missoula in the coming week. 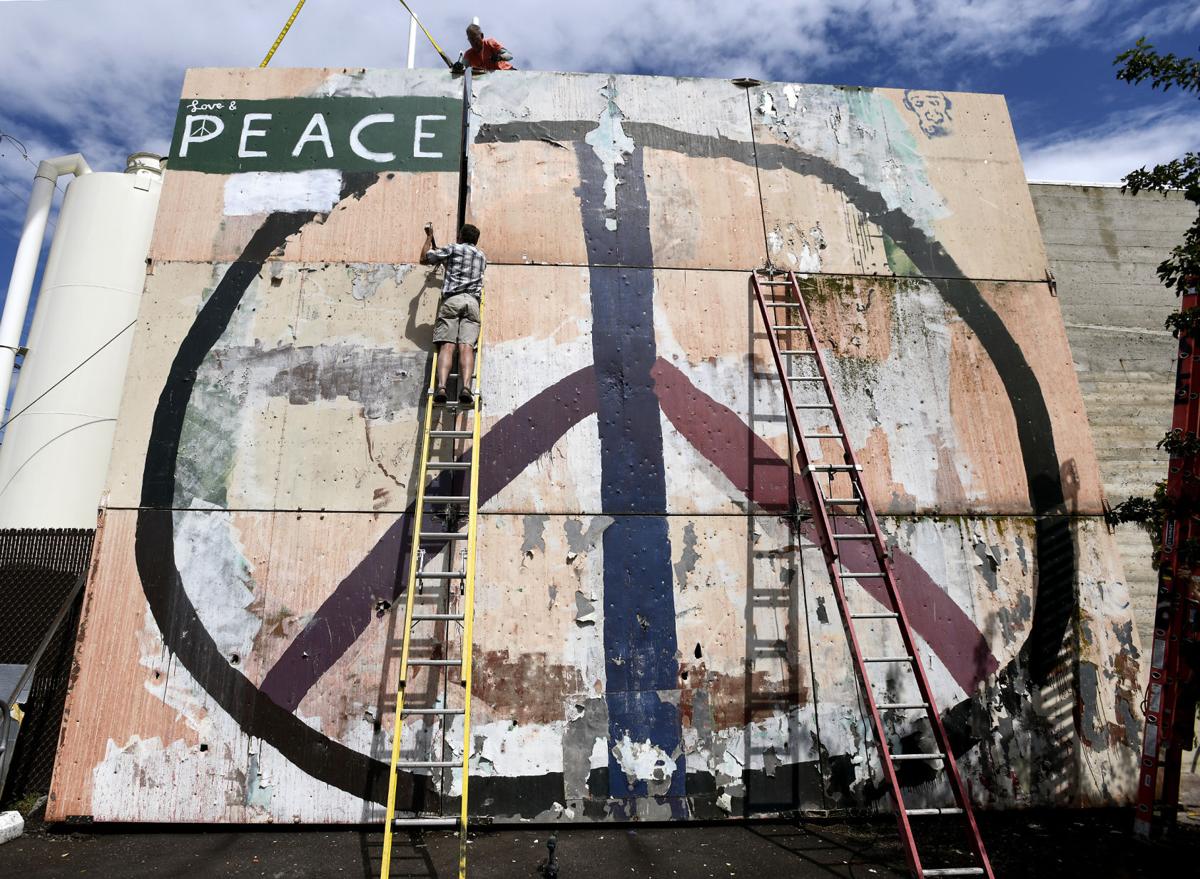 The last piece of the iconic peace sign that once stood on Missoula's North Hills is put in place behind the Jeannette Rankin Peace Center in late August. The former telecommunications equipment, painted over and over for years, was dismantled 20 years ago and the nine sections saved by local residents until it could be reassembled. 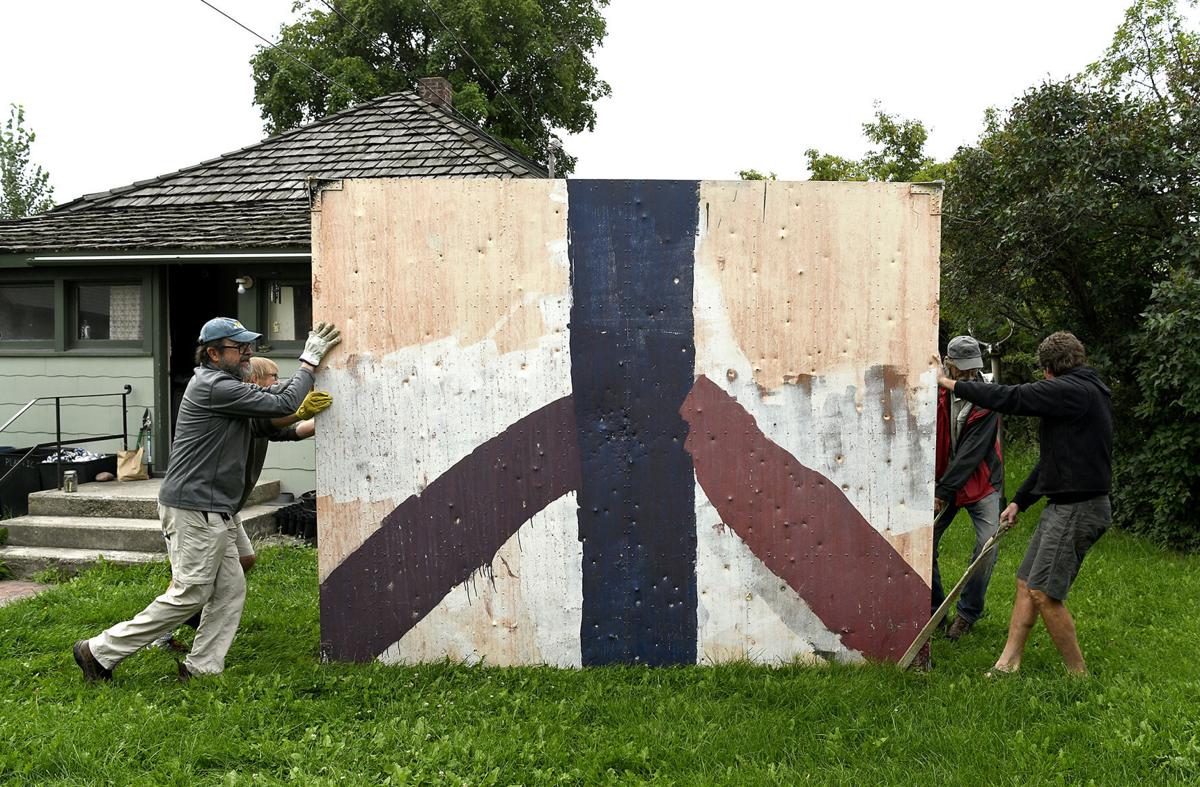 The central piece of the peace sign is moved from the yard of a home on Missoula's Northside in August, to be reunited with the other sections. 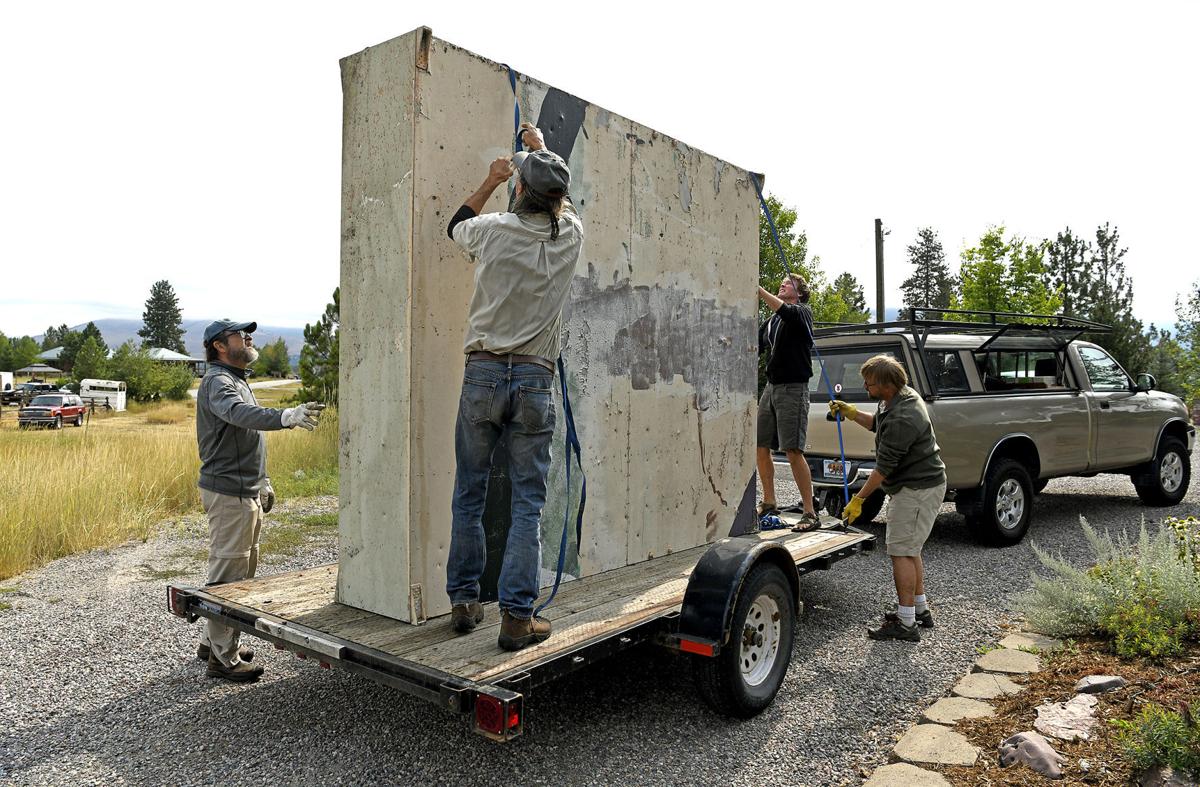 Steve McArthur, Steve Dagger, Dwight Thomas and Jim Parker, from left, secure a section of the peace sign on a trailer as they pick it up from a home in Missoula in August. 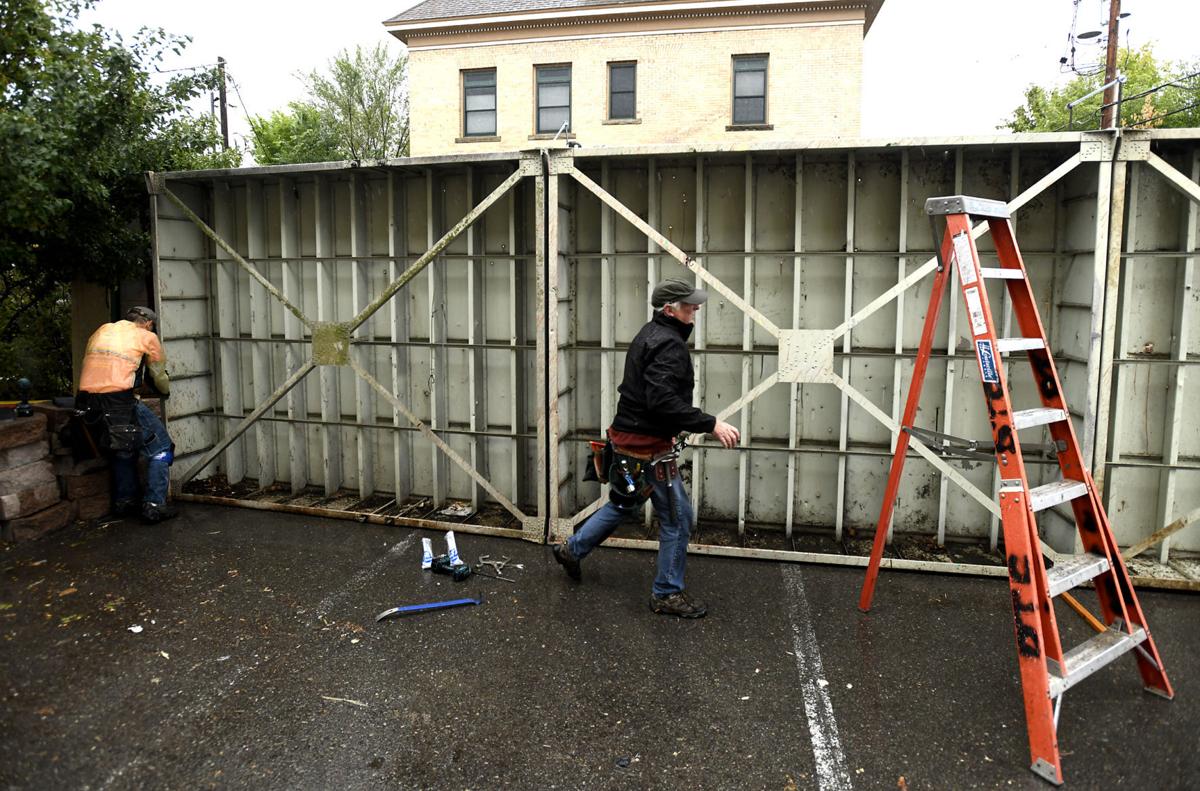 Ed vanAelstyn, left, and Kirby Whetstine prepare the back of the peace sign sections to be lifted into place. 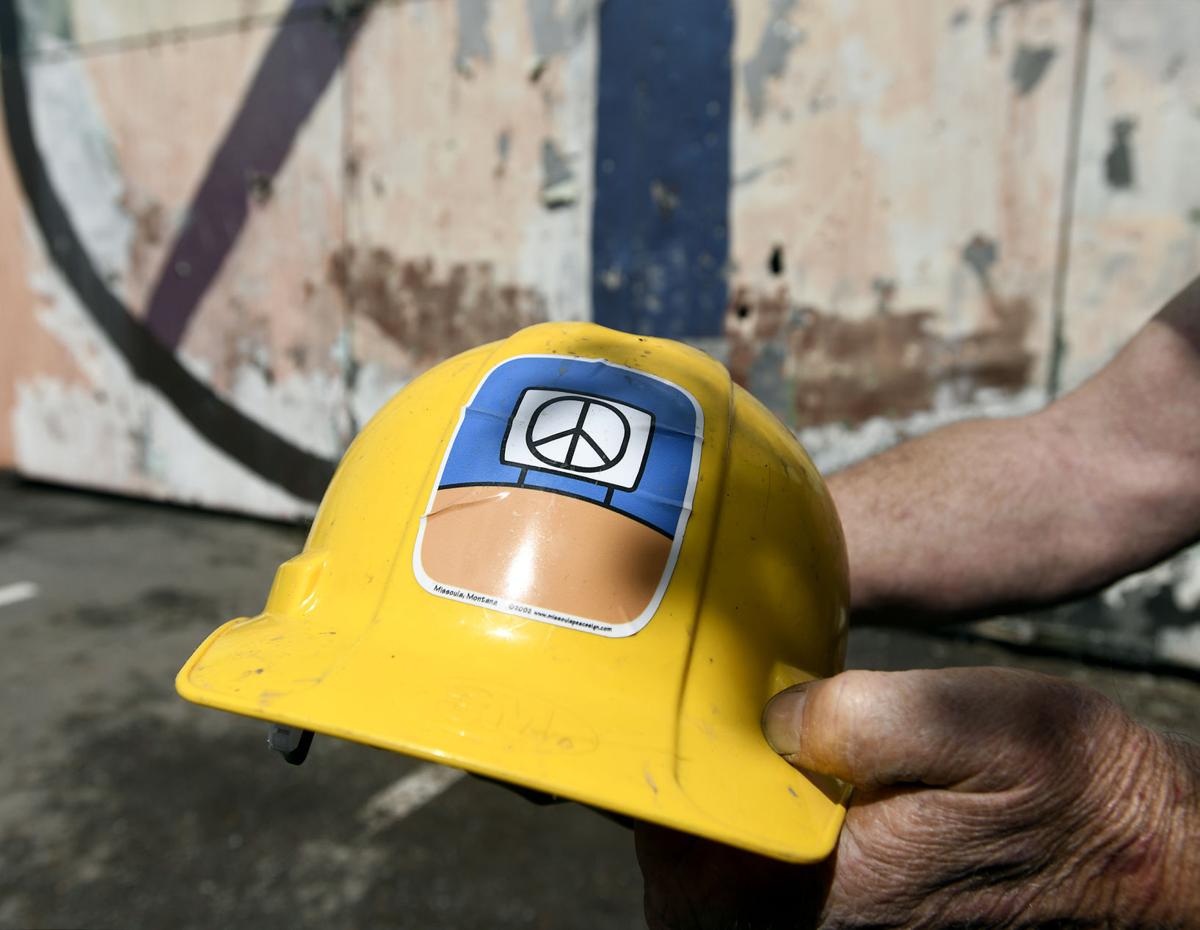 Although the entire peace sign hadn't been seen for 20 years, the iconic image lived on as a piece of Missoula history through things like stickers, this one on a hard hat, and even on an official Montana sponsored license plate. 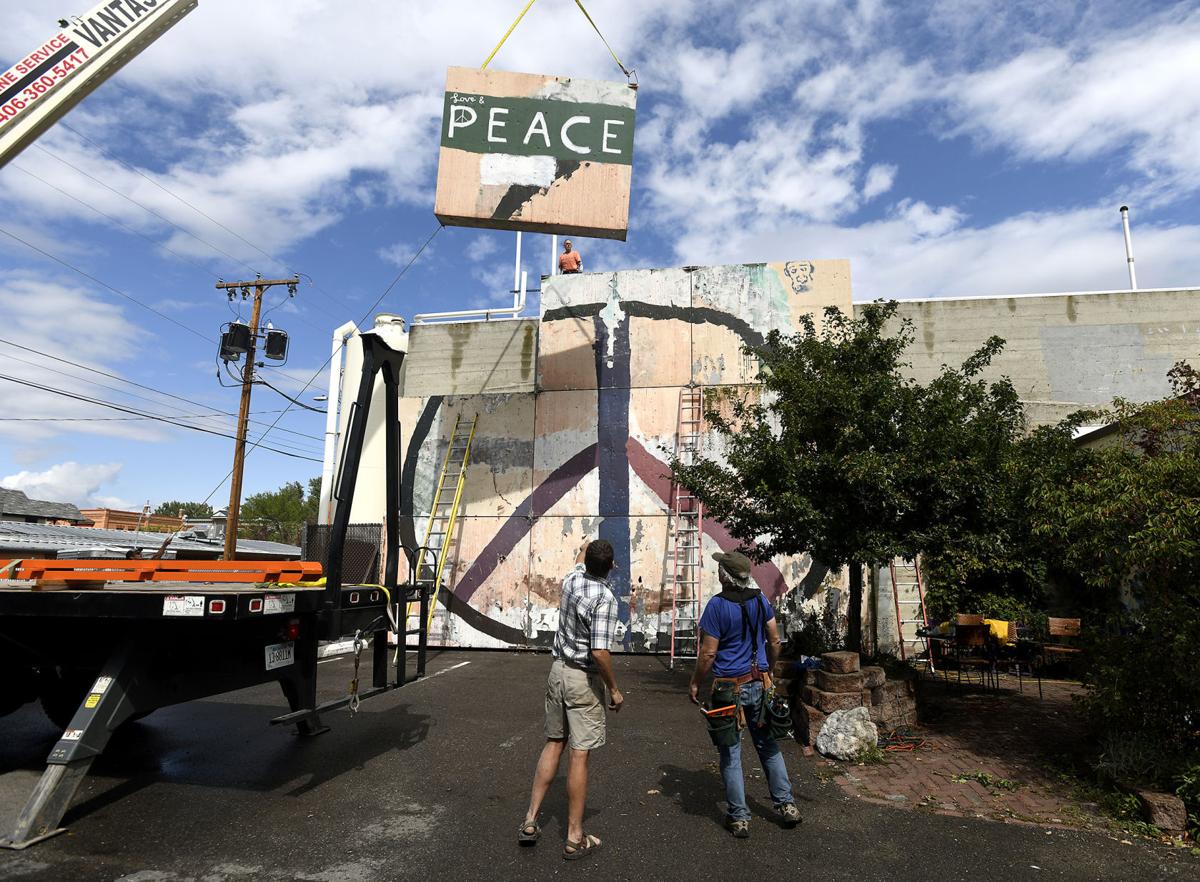 The final section of the peace sign is moved into place at its permanent home behind the Jeannette Rankin Peace Center in late August. Locations to reconstruct the sign were discussed for years, and the Peace Center thought people would feel welcome to view it there. 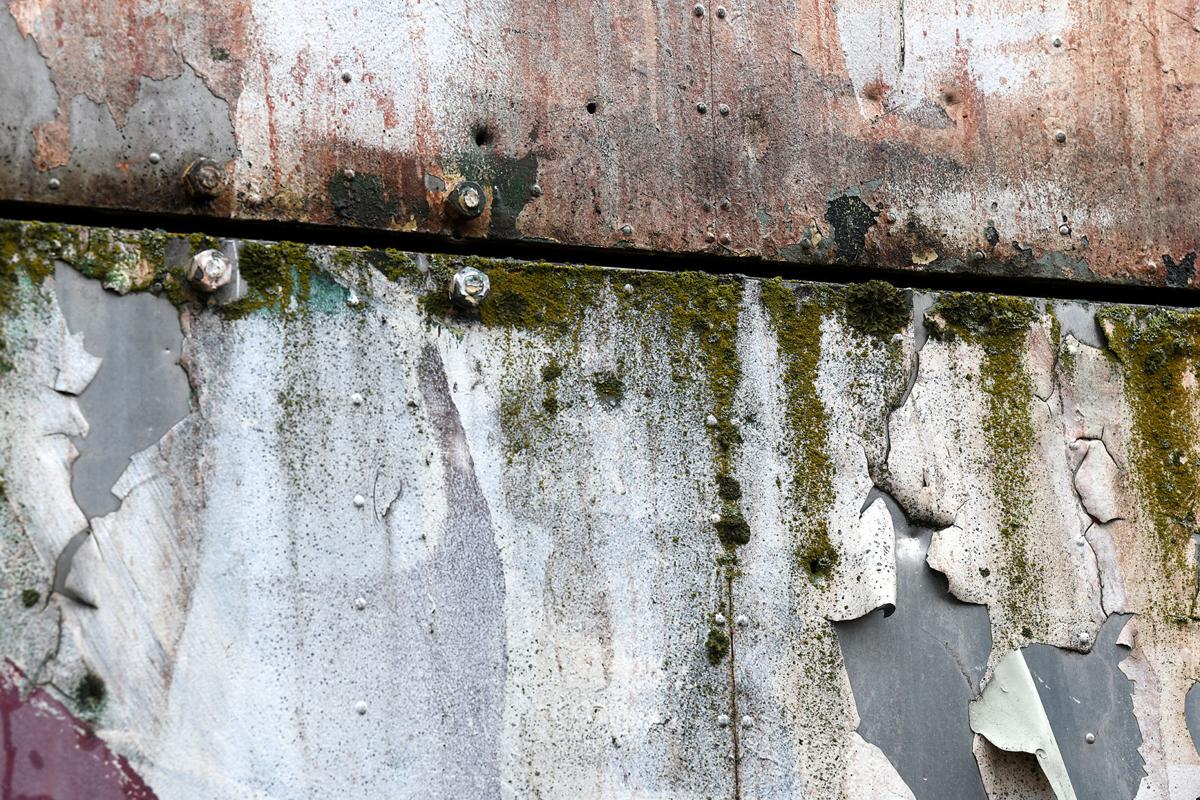 Multiple layers of peeling paint, red slurry from a fire retardant drop on the North Hills and moss from years of storage outside can be seen on the peace sign panels. 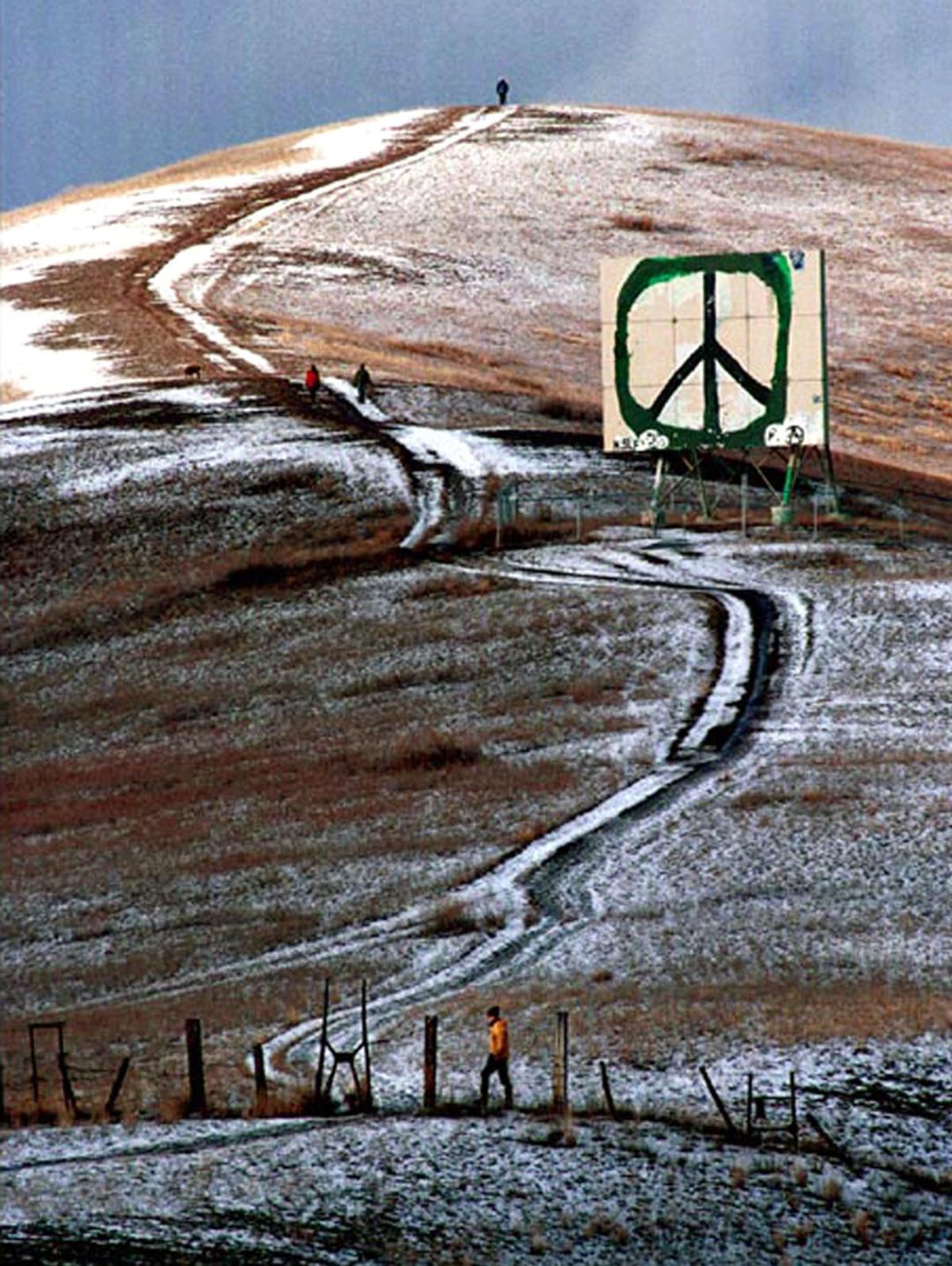 The peace sign, seen in a photo from the 1990s, stood in various forms on Missoula's North Hills for years.