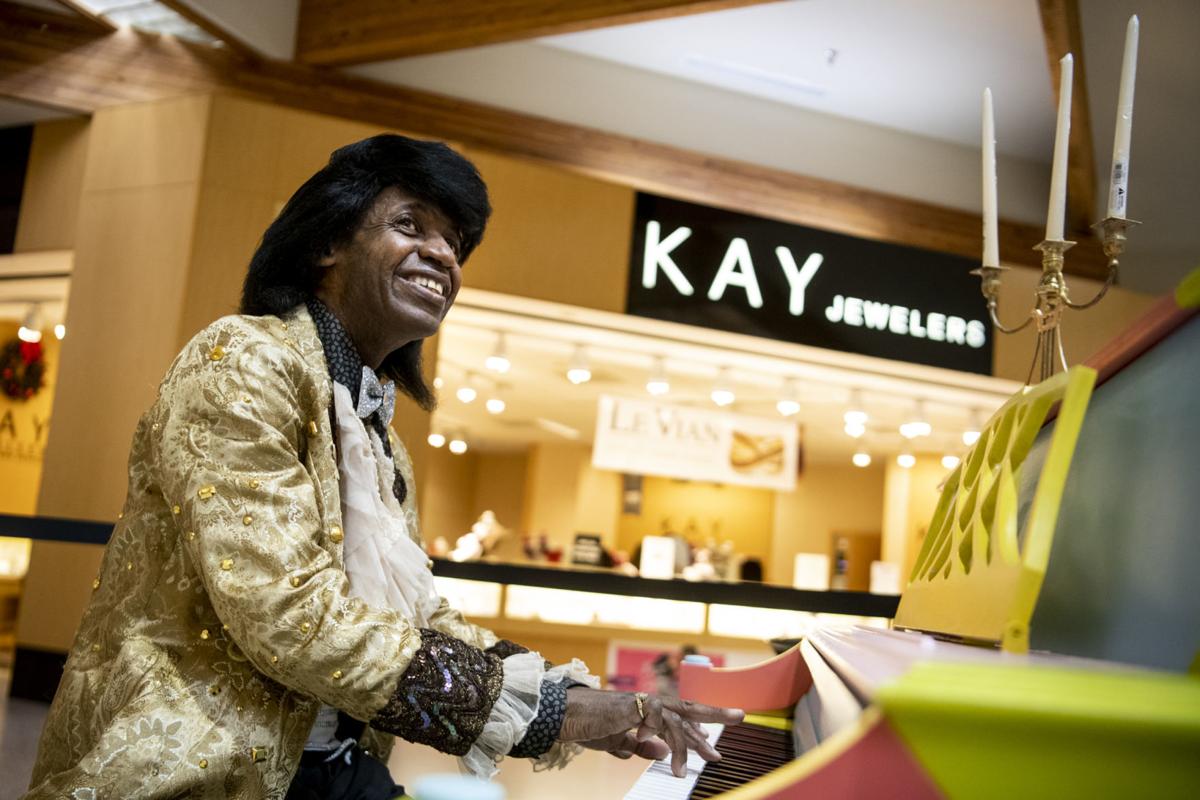 Asaph Adonai is impersonating Liberace on piano daily at Southgate Mall through Dec. 20 from noon to 4 p.m. This is Adonai's 10th year playing at the mall. 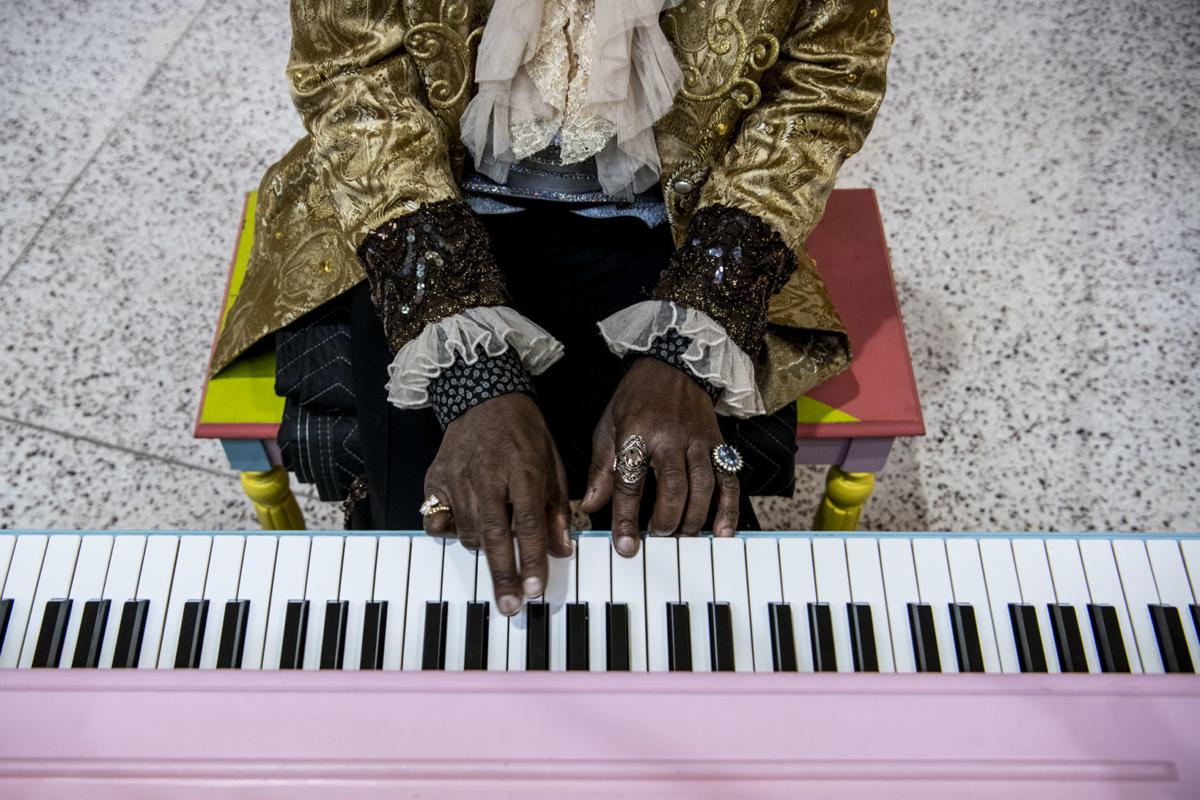 Asaph Adonai is impersonating Liberace on piano daily at Southgate Mall through Dec. 20 from noon to 4 p.m. This is Adonai's 10th year playing at the mall.

Deck the mall with boughs of … Darth Vader?

Asaph Adonai loves to read the faces of Southgate Mall's security guards turn from somber to grin when they stroll by him at play at the piano.

The cheery holiday tunes, classic Beethoven or what Adonai calls “Sinatra Dinner Music” halts for a moment, as a teasing Adonai replaces them with the dark tones of the “Imperial March,” Darth Vader’s theme song.

Missoula’s “Supermarket Pianist” is performing at the Orange Julius corner every afternoon except Sundays through Dec. 20, and you’ll likely hear everything from “Up on the Housetop” to “Strangers in the Night” to Miley Cyrus' "Wrecking Ball" to the theme from Mighty Mouse in his four-hour stints.

It’s Adonai’s 10th consecutive year playing at the mall for the holidays, and this one is special.

He’s channeling everything Liberace, the iconic pianist and showman’s glittery, glitzy costumes, the ostentatious rings on his ivory-tickling fingers, and the candelabra on the multi-hued mall spinet.

Liberace, he said, got the candelabra idea from the 1945 movie “Song to Remember” about Fredric Chopin.

“He's very unique in what he does,” said another Missoula piano player, Jim Rogers, who stopped by to say hi while waiting for snow tires to be mounted at a shop nearby.

Rogers knows his way up and down a keyboard. He plays with the Bop-A-Dips, the Ed Norton Big Band, the country band Northern Lights, and sometimes with the Big Sky Mudflaps, among others.

“Asaph does the Liberace thing," Rogers said. "There’s not too many other people I know that do that, dressing up and doing things like he does.”

The affable 61-year-old Adonai has become a folk figure of sorts since his arrival in Missoula in January 2008, after a dozen years in Billings and more than 30 making music in his native California and on the Strip in Las Vegas.

Here his popularity is spurred by regular performances at Jim Edwards’ Pattee Creek Market on Southwest Higgins. Those, too, started 10 years ago.

“I just went in to get some toilet paper, and they happened to have a piano in there,” Adonai said. “The lady that was running the bakery asked me to play a tune, and Jim Edwards just happened to be nearby and asked me if I’d start playing in the store. That’s how that started.”

The title of his 2015 book “Supermarket Pianist” is based on that experience, but the story’s about his life and, Adonai said, “some of the things I experienced growing up, which were pretty dark.”

“It got a 5-star rating on Amazon,” he added. “I was really surprised. It’s on sale at Fact and Fiction.”

He’s also a YouTube regular with a Missoula Community Access Television’s series “Asaph Adonai Stories.” The most recent segment is on Liberace, which went online this week.

Adonai said his piano style was honed in Billings, where he played for several years at the Billings Hotel.

“I was taught how to take any popular song and play it in a classical style,” he said, demonstrating with a rendition of “White Christmas.”

“I trained for over a year to do that.”

His teacher, the late Marshall Caswell, was a professional pianist at the Northern Hotel. As a young man, Adonai received his initial music instruction in Los Angeles from R.A. “Bumps” Blackwell, Little Richard’s manager and groomer of the likes of Ray Charles, Quincy Jones, Sam Cooke and Herb Alpert.

“I was like one of his last students,” Adonai said. “This had to be about 40 years ago. I went on to study with him for three years. We lost him in ’85, and if he hadn’t passed away he would have become my manager. But I had so much experience by then I was able to get my own work.”

He’s found a home in Missoula, where there’s plenty of call for a gregarious professional piano player. Adonai's first gig at the mall was on Black Friday and for now his play list includes just a sprinkling of Christmas tunes. That’ll change as the big day nears, he promised.

“The main purpose is to bring joy and smiles to the people,” Adonai said. “Think about it. I mean, this isn’t going to change anyone’s life, me being Liberace. But if I can bring a smile or joy, even if it’s just for a moment, that’s what I want to do, especially during this holiday season. And we live in a world where we could use some joy, don’t you think?”