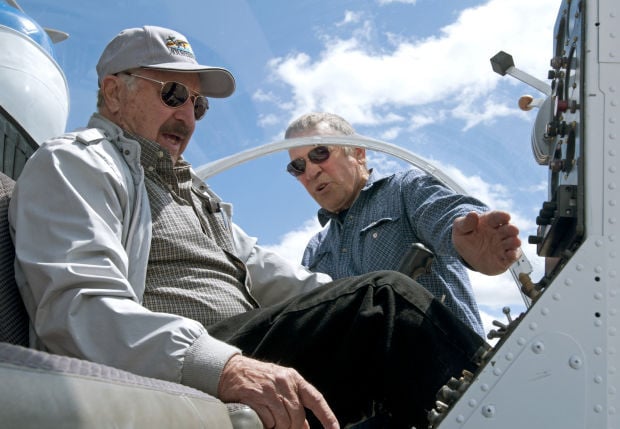 Helicopter pilots Mel Guerrera, left, and Ron Gipe, examine the inside of a Bell 47 G3B1, the newest addition to the Montana Museum of Mountain Flying, at the Missoula airport earlier this week. 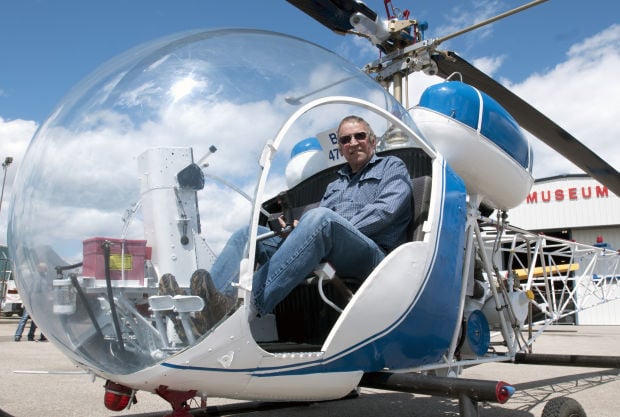 Pilot Ron Gipe poses for a portrait inside the 1966 Bell 47 helicopter he built and delivered to the Montana Museum of Mountain Flying earlier this week. 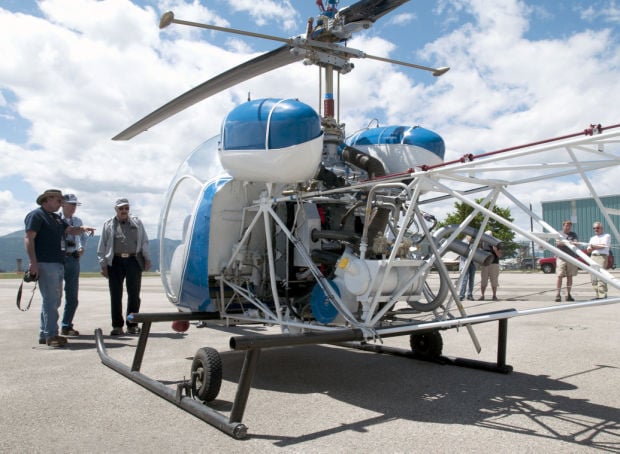 Missoula’s aviation museum has itself a whirlybird.

Maybe you’ve seen Bell 47 helicopters like this, on “M*A*S*H” reruns, if nowhere else.

Ron Gipe has been on the inside looking out of their bubble cockpits for more than four decades, logging 30,000-plus hours in them and counting.

“The best of the best,” a fellow pilot called him.

On Thursday, he oversaw the transport of a Bell 47 G3B1 from his hangar in Lakeside to the Montana Museum of Mountain Flying at the Missoula airport. The copter, crowned by two 19-foot rotor blades, was maneuvered by hand into the museum hangar by volunteers.

They tucked it next to the only other chopper, an Air Force Huey, on loan from Minuteman Aviation and the kind Gipe flew in Vietnam.

The Bell 47 becomes the 13th aircraft in the flying museum, which was opened in 2002. The collection’s centerpiece is the giant DC-3 that flew smokejumpers to their deaths in the tragic Mann Gulch fire in 1949. Their remains were flown back to Missoula on a Bell 47.

The Bell 47 is an especially good get for Mel Guerrera, a museum volunteer who as chief helicopter pilot for Johnson Flying was responsible for hiring Gipe in 1970.

“This is something that we had to have, and it just was not easy to come by until Ron volunteered to build us one,” Guerrera said.

Gipe said he built the non-operational 1966 model from “lots of parts and pieces” he had lying around his hangar at Lakeside Helicopter, the business he’s operated for a third of a century. Like the other parts, the rotor blades are past their time limits. One came as a gift from a company in Stockton, California, that Gipe has been sending his helicopters to for years. A set of operational blades cost upward of $50,000 and a functional Bell 47, while rare these days, is worth half a million dollars.

It was the first used for crop spraying, the first to cross the Alps, the first to be used by all branches of the military. NASA used the Bell 47 to help simulate a lunar module for astronaut training.

Johnson Flying purchased two of the earliest models, probably soon after the Bell 47 came on the market after World War II. Hall of Fame pilot Jack Hughes, the first licensed helicopter pilot in Montana, flew the Bell 47 for Johnson and later became president of the company.

“It didn’t look like this,” Guerrera said of the earliest Bell 47. “It had only half a bubble and wooden rotor blades. But they were the first helicopters in Montana, this basic model.”

For three decades, Johnson continuously upgraded its helicopter fleet, operating as many as 10 Bell 47s at one time, Guerrera said. By the time Gipe came home from Vietnam and got on with Johnson, he could sit in the bubble of a Bell 47 G3B1.

Nearly four miles high, “you didn’t feel like you were even moving,” he reported,

Contrast that with Gipe’s favorite work – crop spraying. Utility wires, fences and the liability associated with drift make it the riskiest thing he does.

“They used to think you had to be dragging your skids through the crops, but it’s pretty standard to be 10 to 15 feet up when you’re spraying with the new sprayers and nozzles they’ve got,” he said.

GPS guidance systems have changed spraying, Gipe added. “It records every swath you make so you can see every skip you had and you can go back and do it (again).”

Now 68, Gipe was forced to “retire” from flying after he was diagnosed with cancer in 2008.

“I pretty much thought I was done, so I sold all my helicopters and business and stuff,” he said.

He underwent two stem-cell transplants in Seattle. Unable to fly upon his return, Gipe turned to building another Bell 47 as therapy, starting from the skids and building up.

“That kind of got him through the down time,” his wife Kathy said. “He just had to have something to do.”

Gipe was cancer-free for two years. He’s battling a recurrence now with medication, but pronounced himself “doing fine” this week.

In fact, he’s back in the business of flying. Inspired by his project, Gipe has purchased two more helicopters and has resumed spraying and other work.

Kathy Gipe watched as her husband climbed behind the controls of his museum piece Thursday for a photo-op.

“I wondered if he’d get to finish it at times, I really did,” she said. “But as you can see, he feels pretty good. He just keeps going. No keeping him down.”

Historic craft to land in Hamilton for Airport Heritage Days

HAMILTON – The Staggerwing Beech was considered the Learjet of its day.

Bernie Wryn and Mel Guerrera spent a week and drove 3,000 miles to haul a worn-out airplane engine to Missoula.

Once it was called the “Limousine of the Air,” the private plane of choice for the likes of Wallace Beery, whose acting career bridged the sil…

Helicopter pilots Mel Guerrera, left, and Ron Gipe, examine the inside of a Bell 47 G3B1, the newest addition to the Montana Museum of Mountain Flying, at the Missoula airport earlier this week.

Pilot Ron Gipe poses for a portrait inside the 1966 Bell 47 helicopter he built and delivered to the Montana Museum of Mountain Flying earlier this week.