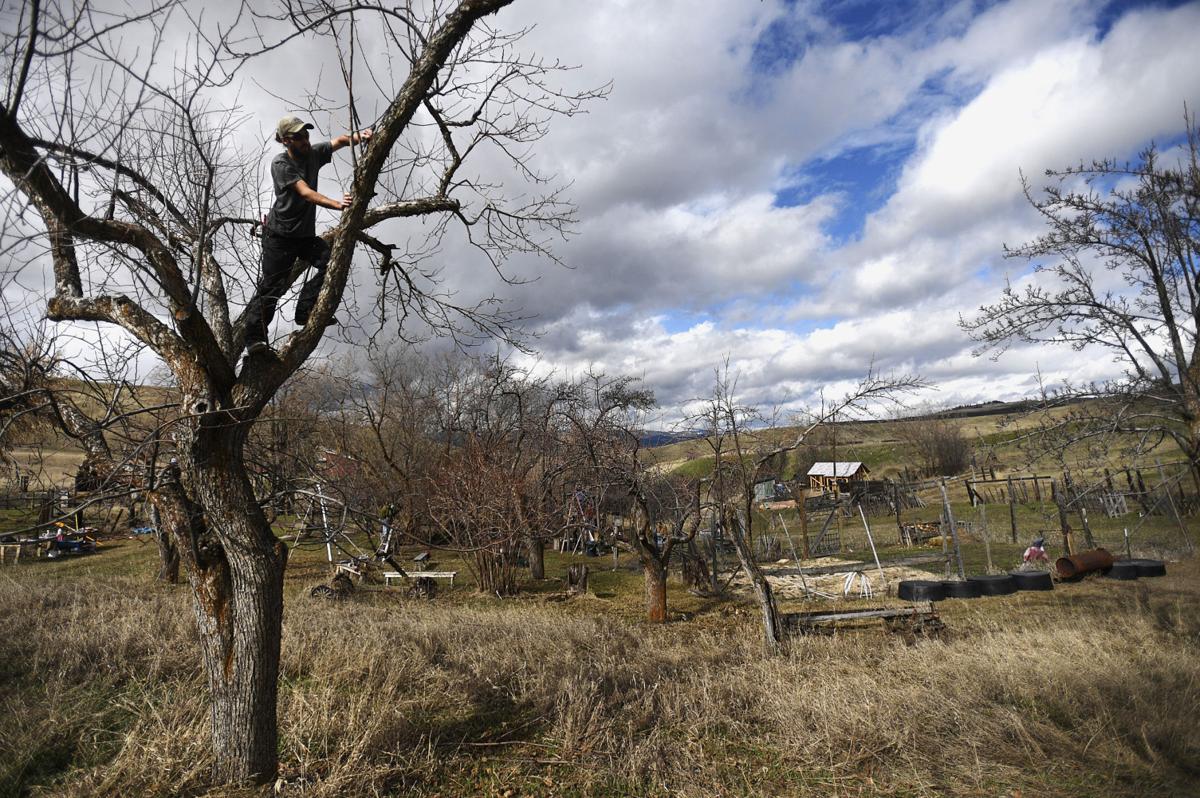 Jesse Hannifin trims one of the apple trees during the "Prune the Moon" event at the Moon-Randolph Homestead on Saturday morning. Lunch and refreshments were provided for volunteers who began pruning around 9 a.m. and finished up around 5 p.m.. 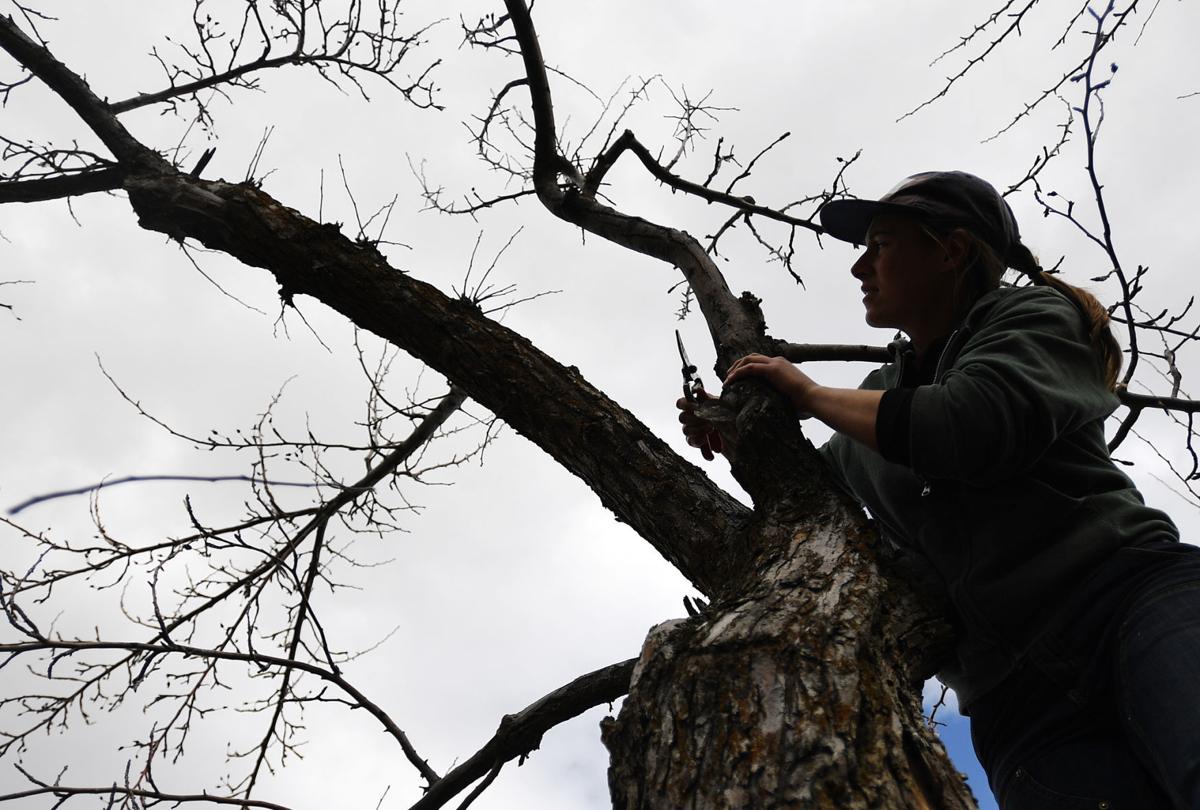 Jesse Hannifin one of the homestead's caretakers, climbs up one of several century-old apple trees first planted in 1889 by Ray Moon on the homestead. 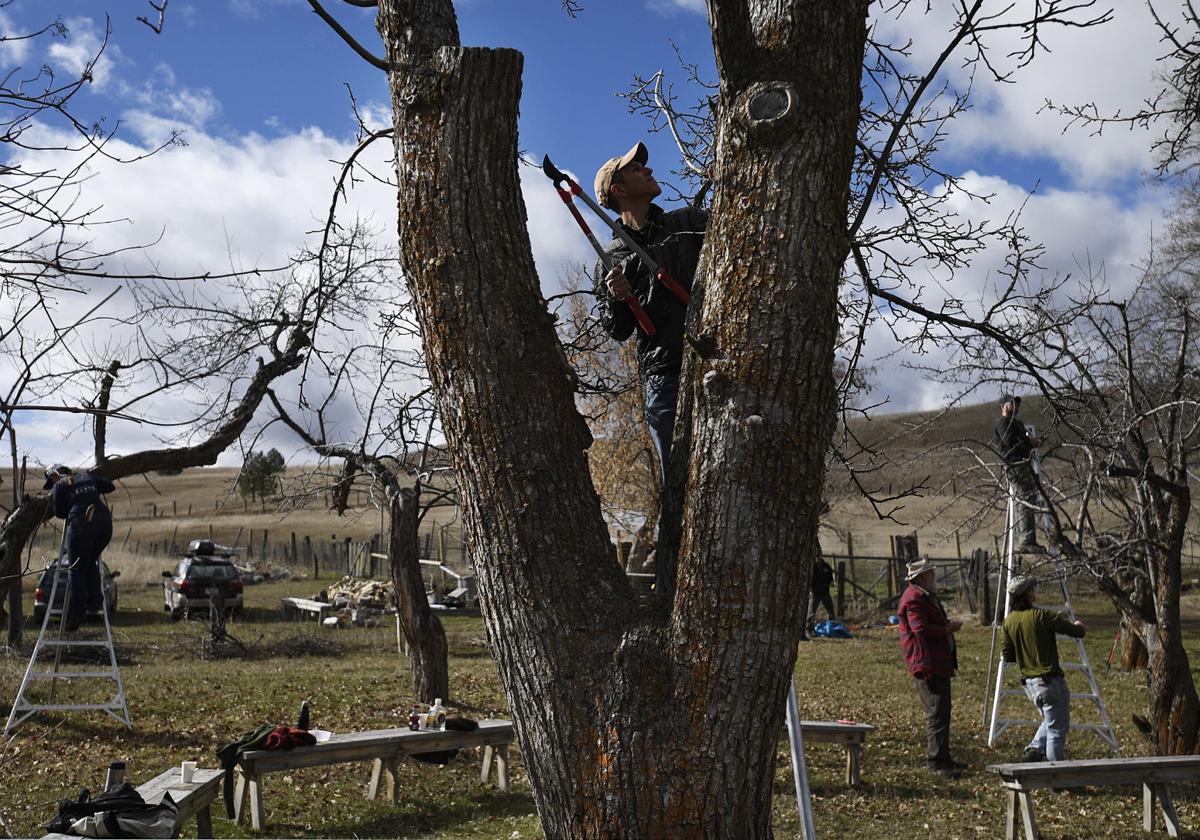 Chris Soriano snips at one of the apple trees on the Moon-Randolph Homestead.

Jesse Hannifin trims one of the apple trees during the "Prune the Moon" event at the Moon-Randolph Homestead on Saturday morning. Lunch and refreshments were provided for volunteers who began pruning around 9 a.m. and finished up around 5 p.m..

Jesse Hannifin one of the homestead's caretakers, climbs up one of several century-old apple trees first planted in 1889 by Ray Moon on the homestead.

Chris Soriano snips at one of the apple trees on the Moon-Randolph Homestead.

Two weeks ago there was a foot of snow in the garden at the Moon-Randolph Homestead, but on Saturday the sun was out and so were more than a dozen volunteers helping to spruce up the orchard.

Caroline Stephens and her partner Katie Nelson – the current caretakers of the property – swung the gate open that morning for the annual Prune the Moon.

The property, first settled in 1889 before Montana could even call itself a state, is tucked away up a dirt road just over the North Hills.

Now listed on the National Register of Historic Places, the homestead is managed by the Missoula Parks and Recreation Department and the North Missoula Community Development Corporation after the city bought it in 1996.

John Kamman, a friend of Stephens and Nelson, said he’s been up to the homestead a few times since the pair moved in and was happy to get back up there Saturday to help out.

“It’s a beautiful day for it, and it looks like a lot of volunteers made it,” he said.

Arborist Mark Vander Meer wandered between the trees at the homestead’s apple orchard, advising the volunteers on where to clip back and what to leave behind.

“I’m always surprised at how much you cut off. I think at first everyone is timid and just trims a couple of inches and Mark will come by and say no, take it all the way back to here,” Kamman said, pointing to a joint in the limb about three feet from the end of the branch.

This year was the fourth Prune the Moon, an event started by Matthew LaRubbio, one of the former caretakers at the homestead.

Vander Meer said in the first two years there was more large-scale pruning to be done, but now that it’s an annual event, the work is minimal.

“I’m pretty conservative. A lot of orchard pruners, they don’t even own these,” he said, pulling a set of hand shears from his belt. “They are just loppers and power saws only.”

Stephens and Nelson applied and were chosen to be the new caregivers – they live at the homestead for free in exchange for maintenance work and other duties – last summer. At the time Stephens was still commuting to St. Ignatius every week, where she managed a five-acre vegetable farm.

“This is the first season where we are really here full time and can put in the work on the garden and the rest of the property,” Stephens said.

Next month, she said they will be buying 70 chickens and six turkeys for the homestead, and hope to add pigs in May.

At a place that in so many ways looks plucked straight from a bygone era, one of the buildings stands out. Near the main gate to the homestead is a coal mining shaft and at the entrance to it, a winch shed was built to house the machinery that hauled carts out from underground.

“A lot of the buildings were built by more amateur builders. They are more vernacular buildings and they haven’t exactly stood the test of time.” Stephens said.

Last fall the graying, weathered sideboards of the old winch shed were carefully removed and stacked nearby and a contractor came and built a new frame with fresh lumber.

Later this year, Stephens said they will hold another volunteer event to reattach the old siding, and hope to have the new, structurally-sound winch shed serve as an interpretive space for education programs about the homestead’s history.

At the Moon-Randolph Homestead, there is beauty in simplicity

On Jan. 2, 1917, 13-year-old Robert Randolph went to his diary and recorded the temperature at his family’s homestead, tucked away in the hill…