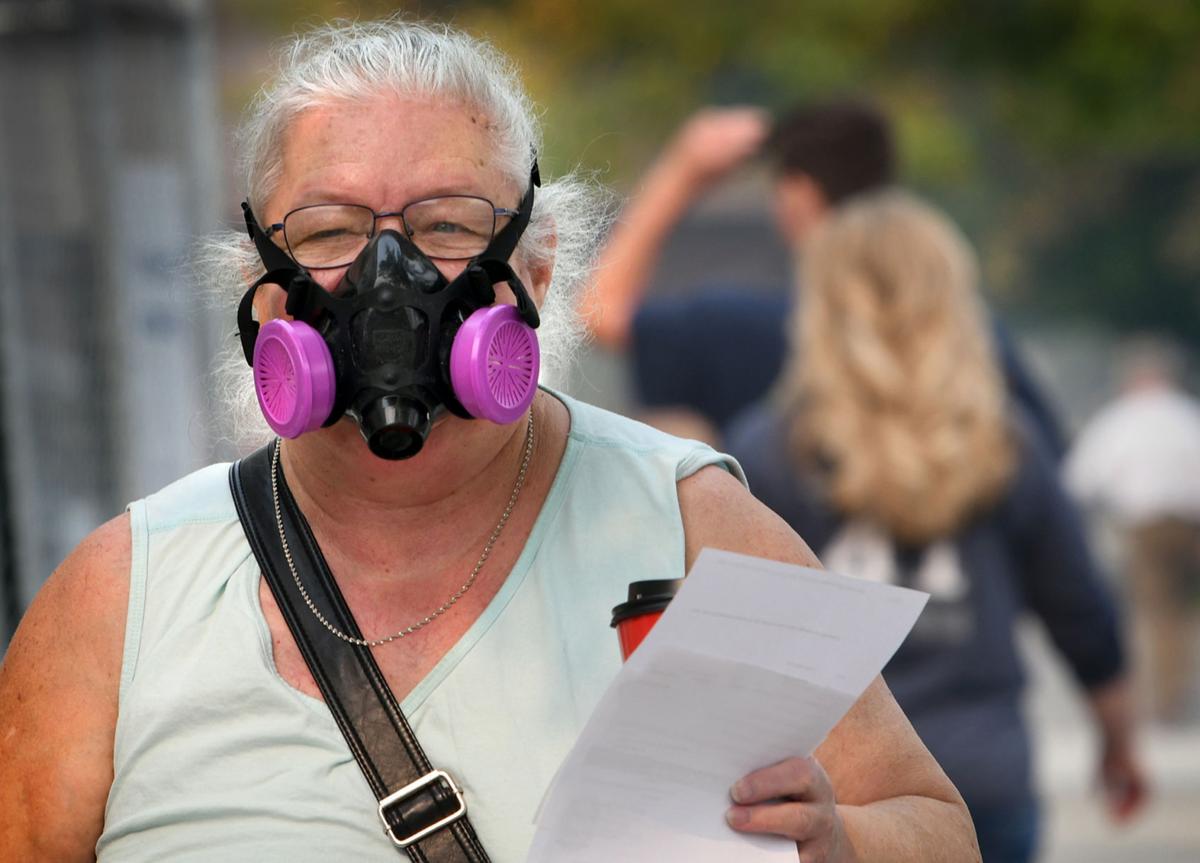 With thick smoke continuing to pour into western Montana valleys, Sandy Hornstein wears a respirator Thursday morning while walking to her truck after taking care of some business at the Missoula County Courthouse. "I've been wearing it since the smoke got bad," she says, "about a month ago. I like my lungs." 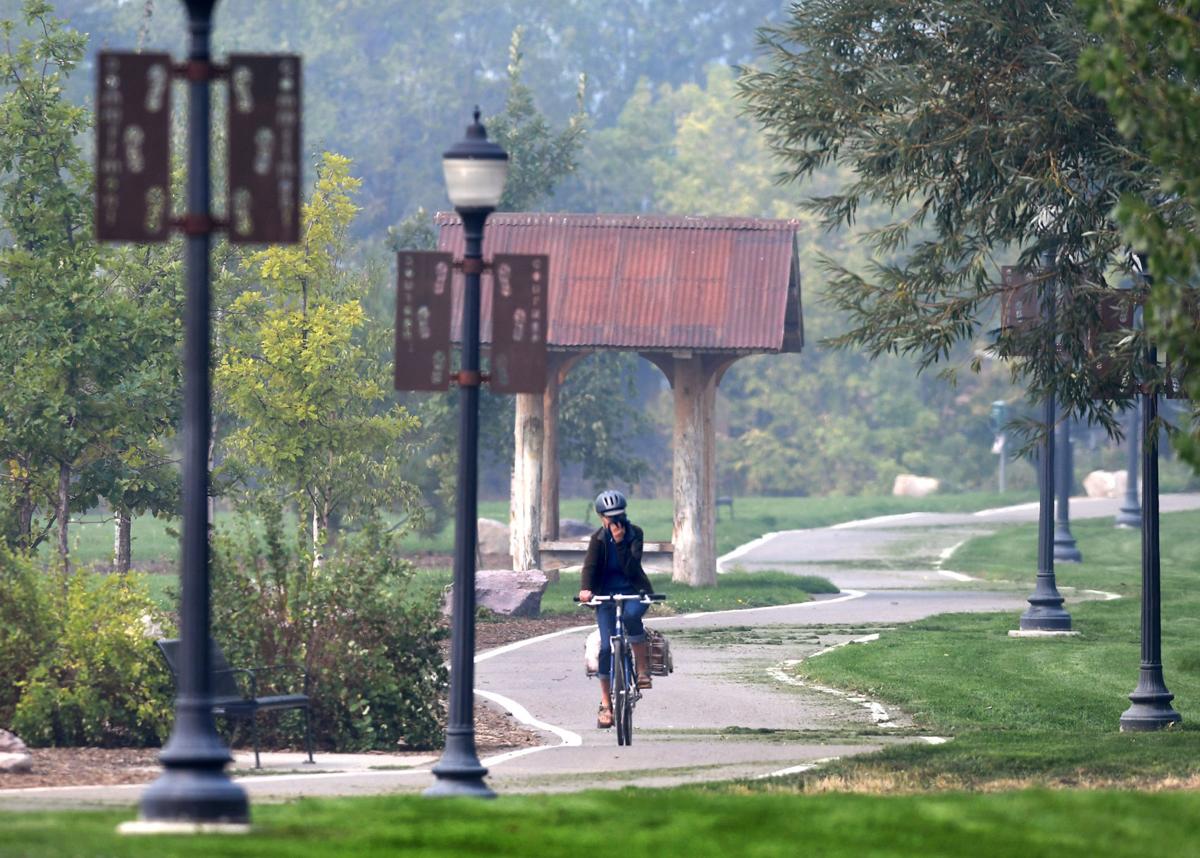 Anne Greene covers her nose and mouth against the forest fire smoke Thursday while riding her bicycle along the Clark Fork River near downtown Missoula.

Rain (n): moisture condensed from the atmosphere that falls visibly in separate drops.

They’re not breathing those magical words “season-ending event” yet.

But weather forecasters in Montana and on the other side of the nation are saying it just might rain soon.

“Above normal precipitation is favored for areas of the ... Northern and Central Rockies,” the National Oceanic and Atmospheric Administration's Maryland-based Climate Prediction Center said this week in its 6-10 day forecast. It made the same prediction for 8-14 days and 3-4 weeks out.

“I would say the confidence in that is increasing by the day,” Dan Zumpfe agreed.

Zumpfe, a meteorologist for the National Weather Service in Missoula, said the weather models have been trending for a wetter, cooler scenario by next weekend.

”It seems to be a fairly consistent thing. What isn’t consistent is exactly when it arrives,” he said. “The model I’m looking at has anything from Wednesday through Friday.”

Uncertain too is how much rain the front will bring.

“But it’s not too often we get these types of systems that we’ll see next week and they don’t have significant precipitation as we get into this time of year,” he said.

Even before that system arrives, there’s a cool weather pattern moving in that brings with it a good chance of rain in the mountains on Saturday.

It’ll be “a little less intense” than next week's, Zumpfe said. But if you’re among the tens of thousands who've been waiting with jaded breath for the smoke to clear even a little, you may be in luck.

On the flipside, managers of the 21 fires currently burning in Montana are preparing for another active weekend because of it. The blanket of smoke has served to limit fire growth since Monday.

At 623.5 micrograms per cubic meter of air (ug/m3) as an average during the 24-hour period, pollution in the area of the Rice Ridge, Liberty and Bob Marshall Wilderness fires was nearly 18 times the National Ambient Air Quality Standard.

Monitors by Seeley Lake Elementary School remained at the highest measurable level of 1,000 ug/m3 Thursday morning. The level started falling shortly after noon, a few hours earlier than the day before, and plummeted through the Very Unhealthy range to Unhealthy by 5 p.m.

Dozens of outdoor sporting events throughout the region have been called off or moved because of the smoke plague that was blanketing half the state. (See the sports section).

But Zumpfe provided another silver lining.

“I think this week we’re going through the worst of it,” he said.

The weather service at the Missoula airport measured 10.05 inches by the end of June, reflecting a winter and spring with precipitation far above normal. Missoula didn’t surpass 10 inches until October last year and never did reach double digits in a dry 2015.

But that was long ago and far away. While other parts of the region, including the city of Missoula, have experienced a handful of rain storms in the past 2 1/2 months, the airport got only one, in mid-August. It was worth .2 of an inch, and Missoula has sat officially at 10.25 inches since. It dipped below the average mark for the year on Wednesday.

Managers on the West Fork fire north of Libby reported at 2 p.m. Thursday that a planned burnout was going as expected with low intensity, backing fire.

Crews were lighting from Lindy Peak south to the junction of Quartz Creek Road and Bobtail Ridge Road.

Most Libby neighborhoods north of the Kootenai River were under evacuation orders or warnings as firefighters and Lincoln County officials geared up for the windy weekend. Several more areas to the south of the fire were ordered to leave their homes by noon Thursday.

“There are strong winds that are coming in on Saturday, so we’re going to see what we can do to get a handle on this fire,” said fire information officer Vickie Russo. “That’s definitely one of the reasons that this burnout was done. They’re trying to increase that buffer between the active fire and all the residences. We’ve been really fortunate with the winds we have not had.”

The evacuations for the 6,500-acre West Fork fire, burning between Libby and Turner Mountain Ski Area, were ordered Wednesday evening by the Lincoln County Sheriff’s Office.

Burning operations will last until at least Saturday, according to Facebook posts by the Western News. Residents were told at a meeting Wednesday evening that they could return to their homes by Sunday if all goes well. So far, it has.

Mandatory evacuations already were in effect for areas north of the fire: the 17-Mile community of Pipe Creek Road; Upper Bobtail Road, north of and including Hutton Drive; Milton Drive, Bobtail Lane and Verna Court, and the Quartz Mountain Road.

The West Fork fire was discovered Aug. 30 burning seven miles north of Libby, in the Quartz Creek and Bobtail Ridge area. It quickly escaped containment efforts due to extremely dry fuel and critical fire weather patterns, according to the InciWeb website that marshals the nation’s wildfires.

The latest acreage total consumed by the Rice Ridge fire that started near Seeley Lake has topped 120,000. It was at just 40,000 acres Sunday.

The numbers increased by 10,000 when the northeast edge gobbled up the Reef fire in the Bob Marshall Wilderness, information officer Mike Cole said. It’s a mile away from another wilderness fire, the Monahan, and is expected to meet a lightning-caused fire in the North Fork of the Blackfoot on its journey east.

Beyond that is another major fire, the 16,000-acre Park Creek fire, which started a couple of miles north of Lincoln and was burning actively in the Arrastra Creek drainage on Thursday. The two big fires are just 10 miles apart, said Cole.

“We’re even coordinating with the Park Creek fire and working with them on sharing heavy equipment,” Cole said. “I guess we’re going to meet them in the middle.”

Coverage of the 2017 fire season: One of the worst in decades

Every day, usually twice a day, the Missoulian newsroom produced roundups on the fires consuming tens of thousands of acres in western Montana…

The first clue something might be awry came in the morning email.

Fire camps: Keeping firefighters fed, clothed, and clean all from the comfort of trailers and tents

TARKIO — Fighting wildfires in the Montana wilderness is a complex and difficult job that requires hundreds of firefighters, support staff and…

After weeks of smoke, fire and the fear that houses would be lost, almost all Seeley Lake residents were allowed to return home as of Sunday morning.

No rest for firefighters as winds precede approaching rain

Summer of fire won't be forgotten

Sliderock. Moose Peak. Little Hogback. They could have been rock bands.

With thick smoke continuing to pour into western Montana valleys, Sandy Hornstein wears a respirator Thursday morning while walking to her truck after taking care of some business at the Missoula County Courthouse. "I've been wearing it since the smoke got bad," she says, "about a month ago. I like my lungs."

Anne Greene covers her nose and mouth against the forest fire smoke Thursday while riding her bicycle along the Clark Fork River near downtown Missoula.