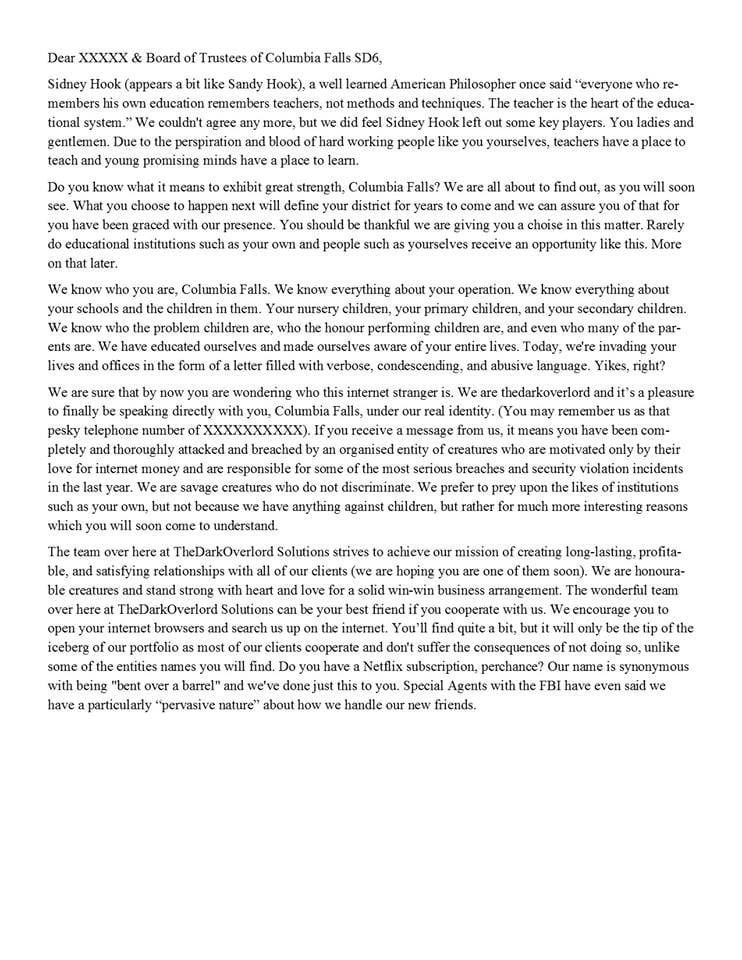 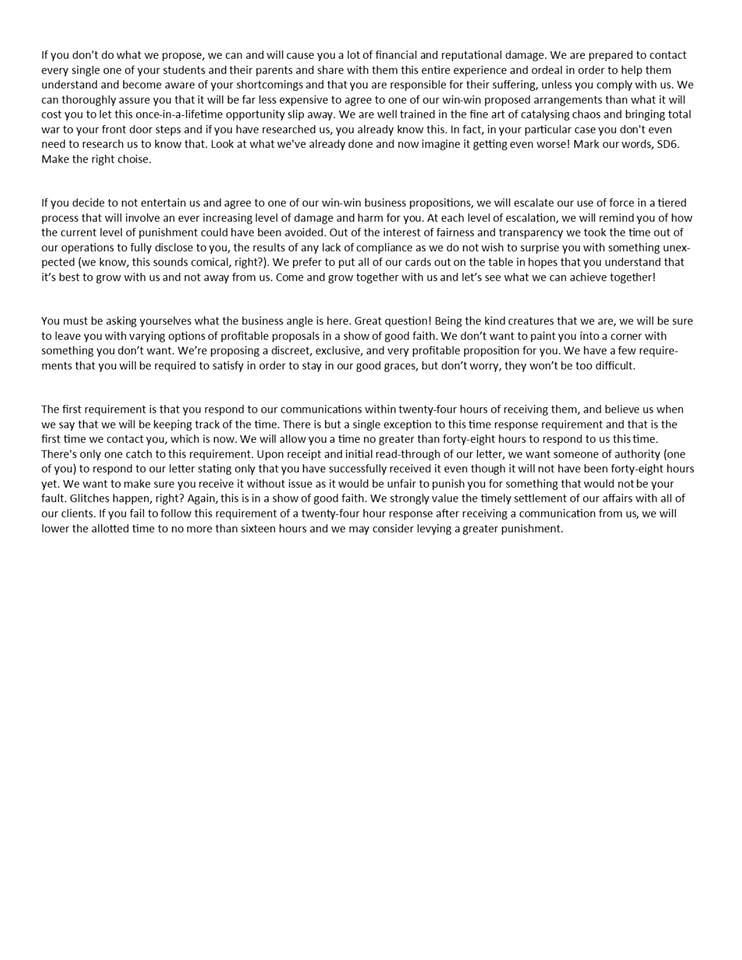 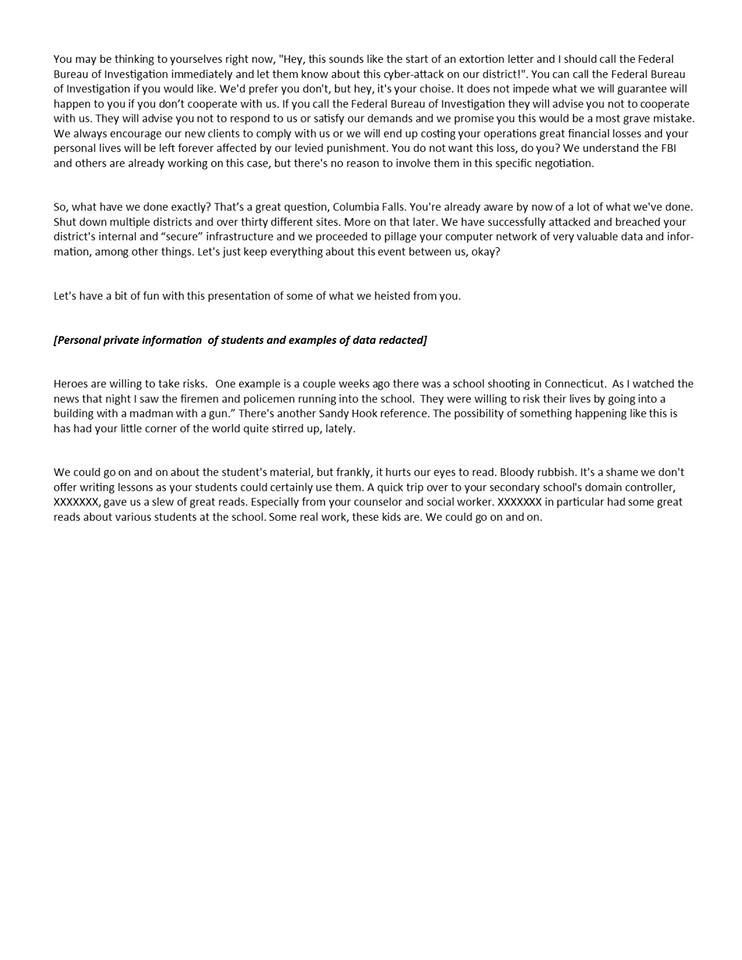 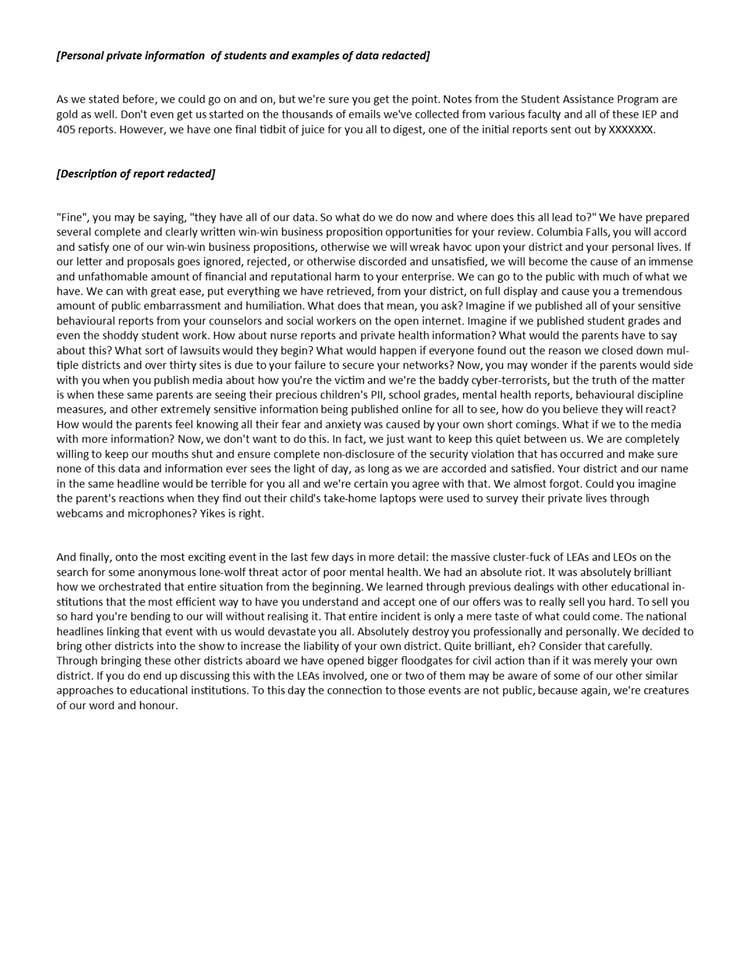 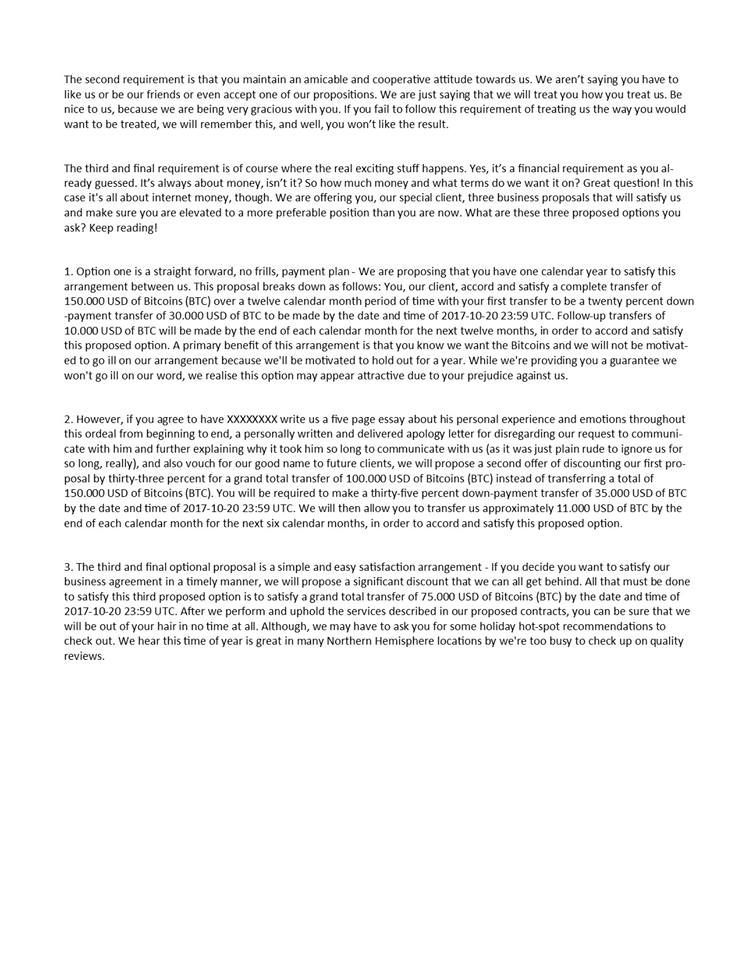 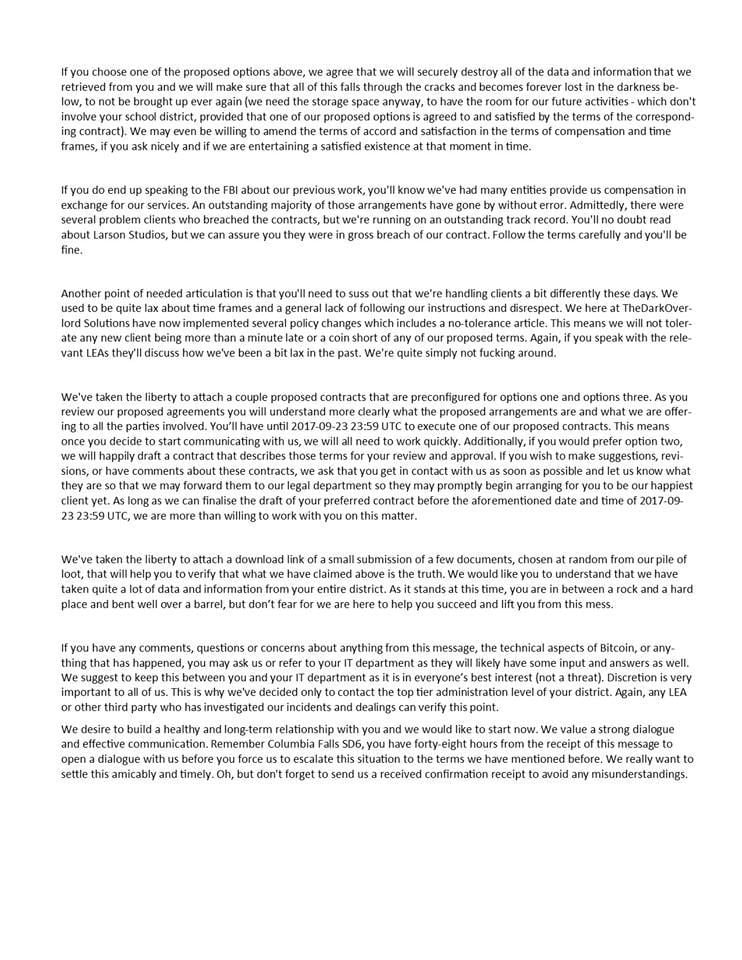 A ransom note from the cyber terrorists who threatened Flathead County school districts over the last several days gave clues to the identity of the attackers and their motive when it was made public Monday evening.

Flathead County Sheriff Chuck Curry posted the ransom note on Facebook (with some information redacted) along with a written statement, to alleviate concerns about student’s and teacher’s physical safety.

“We have made the unusual decision to release the ransom demand letter,” Curry wrote. “We feel this is important to allow our community to understand that the threats were not real, and were simply a tactic used by the cyber extortionists to facilitate their demand for money.”

Public and private schools around Flathead County, as well as Flathead Valley Community College, which have been closed since Thursday, will reopen Tuesday as planned, Curry said in a telephone interview Monday evening.

"There is no physical threat to kids," he stressed.

The hacker group, calling itself TheDarkOverlord Solutions, asked for a ransom of digital currency in exchange for not releasing personal information they have about students, teachers and school administrators.

In the ransom note, the group described its mission as a "business proposition" adding that unless its demands were satisfied "we will wreak havoc upon your district and your personal lives."

In April, a group with the same name released what it said were a number of new episodes, scheduled for June, of the hit Netflix series "Orange is the New Black," and threatened to release titles from other series unless "modest" ransoms were paid, according to the Associated Press.

The note posted Monday on the Flathead County Sheriff's Office Facebook page was sent to members of the Columbia Falls school district, Curry said, by the overseas group that is the subject of several investigations around the country.

“We have also discovered that they have frequently failed to live up to their promises to not release the stolen data in the past, even when their ransom demands have been met,” Curry wrote. “We fully understand the concern and fear that has resulted from this cyber-attack, and want the community to know that all the valley law enforcement agency heads feel there is no threat to the physical safety of our children.”

In addition to schools being closed for three days, all extracurricular activities were canceled through the weekend and into Monday. Not only were home athletic events canceled, but teams from the Flathead did not travel to any away games. More than 15,000 students were affected.

Informational meetings for parents were scheduled around the county Monday and there will be a law enforcement presence at area schools "until we are able to apprehend the suspect or further discredit the threat," Curry said.

"It's really very unfortunate that somebody anywhere in the world can cause this much fear in a community," Curry said Monday evening. "Unfortunately, it may be the future of law enforcement. ... More and more, I fear this is the wave of the future."

The full ransom letter is attached.

The Associated Press contributed to this article.

Frenchtown School District Superintendent Randy Cline has had his job for 12 years now, and has sought a dedicated school resource officer the…

Trenton Johnson was a scholar and standout athlete, but fate and the forest still took his life