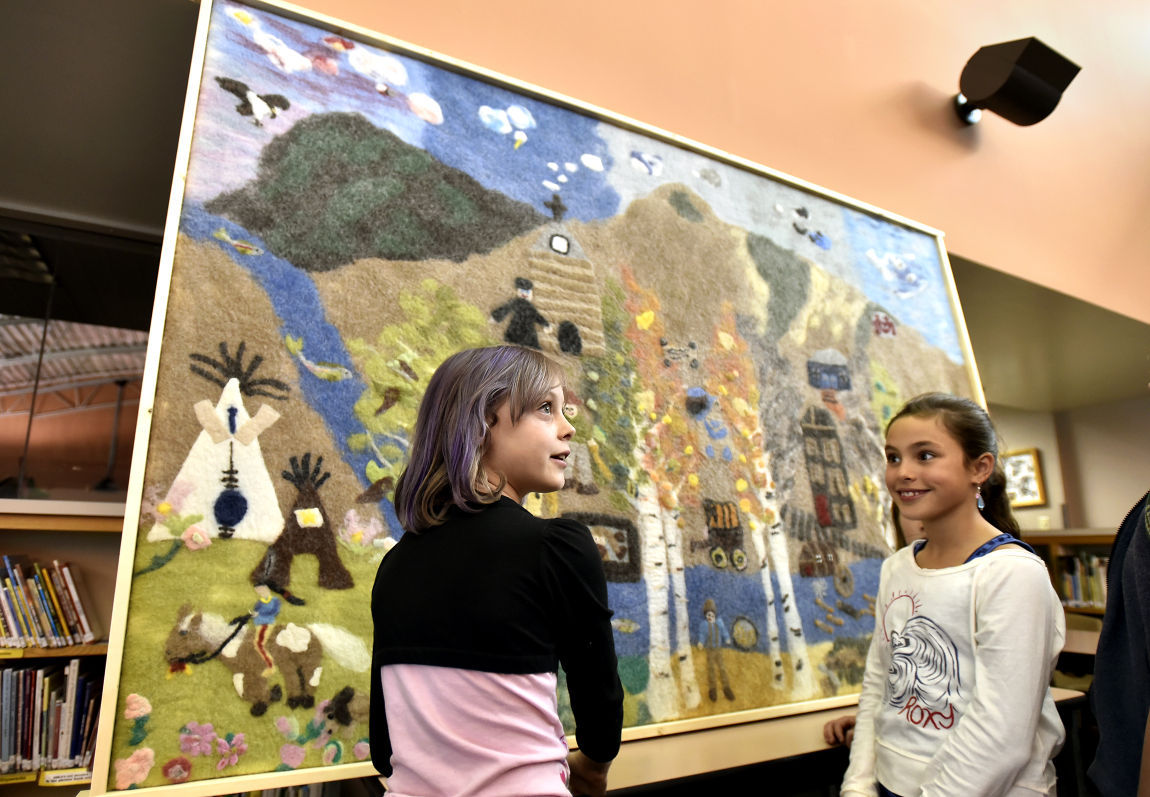 Rattlesnake Elementary School fourth-graders Zaylie Wright, left, and Sophia Cowmey stand in front of the felt mural that they and other students helped make beginning last year when they were in third grade. The mural, which will hang in the school’s library, depicts scenes from different eras of Missoula’s history. 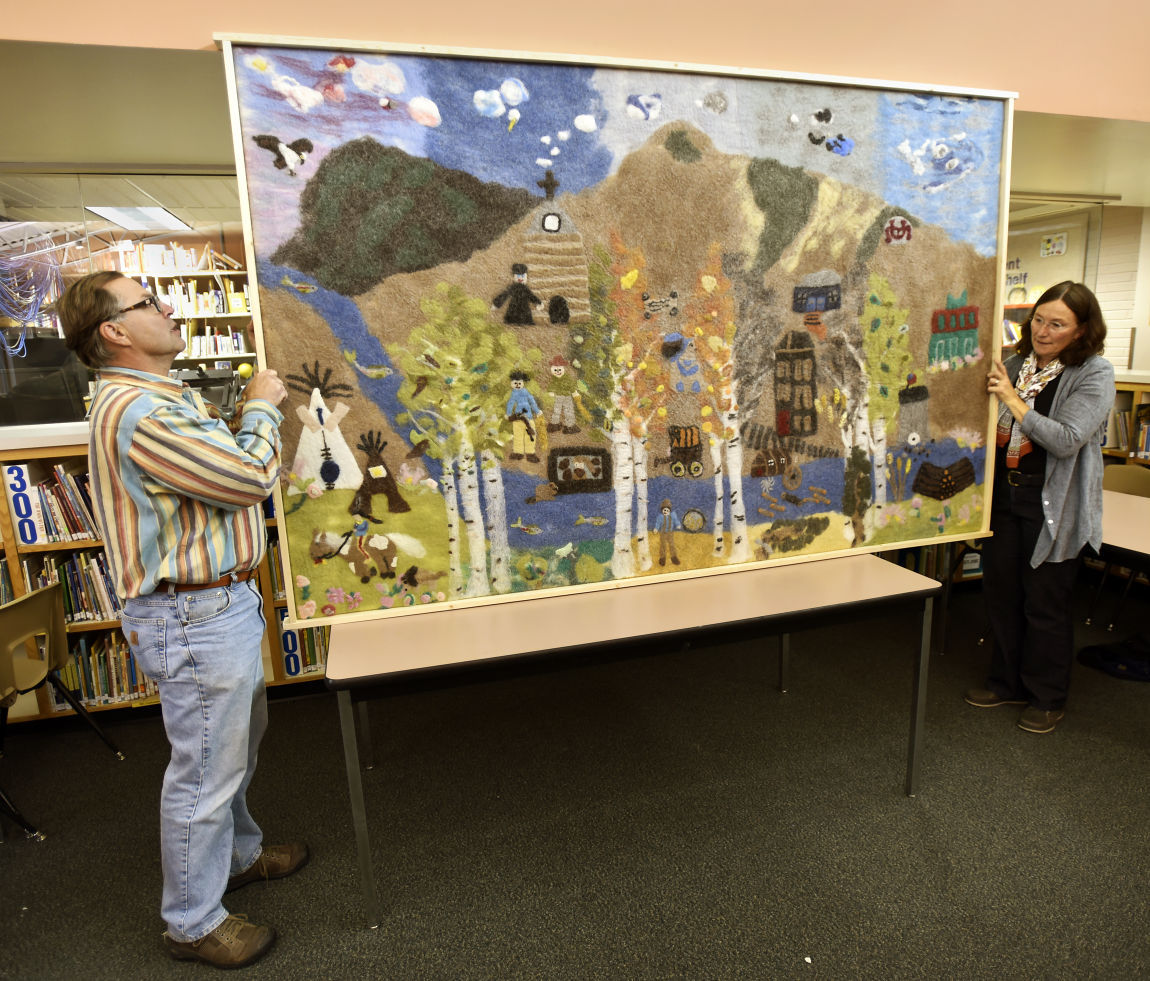 Lewis and Clark, Native Americans, the Missoula Mercantile and the University of Montana. A new, student-made mural at Rattlesnake Elementary School tells the history of the Missoula area in a tapestry of felt.

The mural was installed in the school's library on Monday, its first public display since work ended last school year in Maureen Loewenwarter's third-grade class at Rattlesnake.

Missoula artist Mary Shaffer started working with the class in February, and the project was completed in June.

The piece, which measures 8 feet by 5 feet, is split into five sections, representing what Shaffer called different eras of Missoula’s history, from pre-contact between Native Americans and white settlers through modern times.

Each of the 28 students who worked on the mural chose a specific motif to design in wool. Students also designed the clouds, plants, fish and leaves that fill out the rest of the piece.

Many of the motifs were made by needle-felting wool, using special barbed needles that help combine the fibers from different wool colors, Shaffer said. At the end of last school year, the entire piece was felted together using a process called wet felting.

“We put warm water on it and then all the kids stepped on it for hours to embed it into the fabric,” Shaffer said.

Loewenwarter said Shaffer asked her at the start of the year if they could work together to design an art project that could be implemented as part of the curriculum she was teaching in her class.

“So we decided to include it, using social studies and history,” Loewenwarter said.

In addition to making the mural's many pieces, students were also required to learn about the different eras in the history of the Missoula Valley and surrounding region.

Sophia Cowmey, a 10-year-old fourth-grader who was one of Loewenwarter’s students last year, did the tall trees that separate the eras of the mural, and also separate the seasons depicted in the work.

“We just stretched it out to be tall enough, then pulled out pieces to make the branches for it,” she said.

Her friend Zaylie Wright, 9, made the Blackrobe missionary who stands in front of the mural’s depiction of St. Mary’s Mission in Stevensville.

“We knew first what we would make, we did drawings before we started making them,” Wright said.

Shaffer said she has tried to find some way to have a class art project at Rattlesnake once per year.

“It’s about creativity, and that can help anything that students might follow in their life in the future,” she said.

Most of the wool for the mural was donated by a pair of Montana sheep ranchers, Kathee Dunham of Arlee and Judy Colvin of St. Ignatius. As part of the project, Shaffer said she also talked to the students about the importance of the wool industry in the state, and had them examine what wool looks like under a microscope to learn more about its structure.

After the mural was hung in the library, it was covered up again. Shaffer said the artwork will be officially unveiled during an open house from 6 p.m. to 7:30 p.m. Thursday at Rattlesnake.

How inhaling ozone harms your health

How inhaling ozone harms your health

War refugees from Myanmar who flee to Thailand face a harsh reality, including performing unskilled work in dirty and often dangerous conditio…

At its regular board meeting Tuesday, the Missoula County Public Schools Board of Trustees received an update on the SPARK! program, Missoula’…

Two Missoula education professionals, Melanie Charlson and John Combs, have been selected to serve on a statewide committee that will help set…

Rattlesnake Elementary School fourth-graders Zaylie Wright, left, and Sophia Cowmey stand in front of the felt mural that they and other students helped make beginning last year when they were in third grade. The mural, which will hang in the school’s library, depicts scenes from different eras of Missoula’s history.