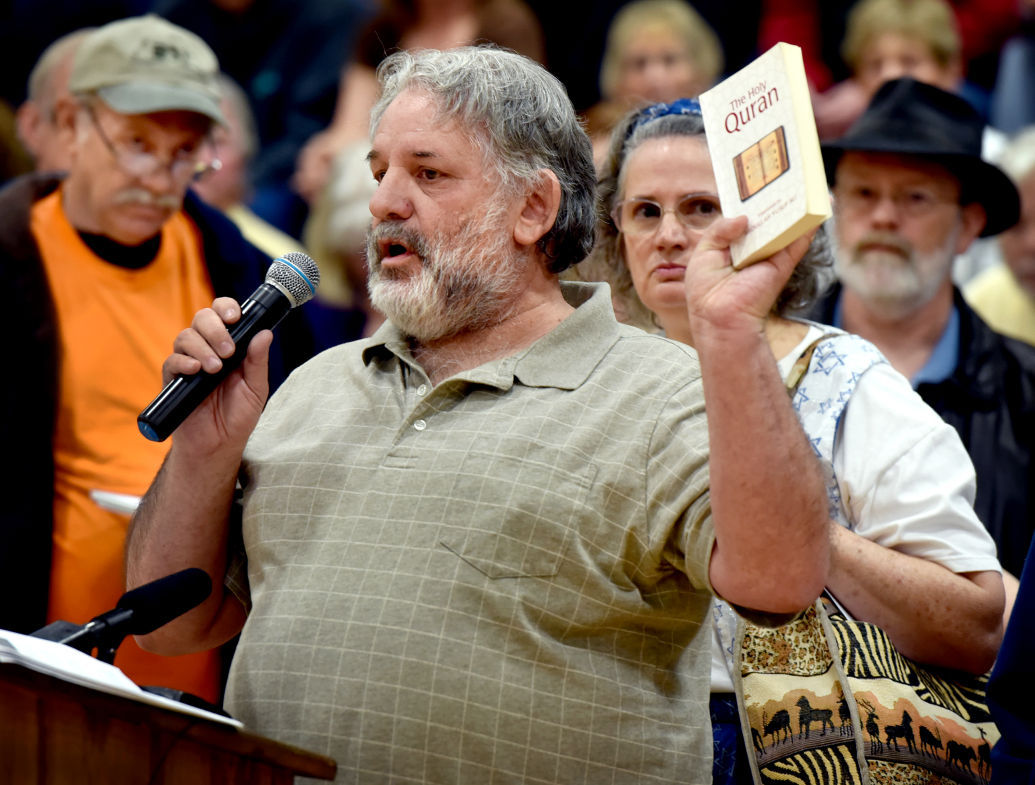 Richard Paris holds a copy of the Quran on Thursday afternoon while speaking during a public hearing to the Ravalli County Commission to voice his support of a proposed letter opposing the settlement of Syrian refugees in Ravalli or any surrounding counties. Paris, a native of New York who lived there during the 9/11 attacks, warned the commissioners there are several passages in the book that “tell believers to kill non-believers.” 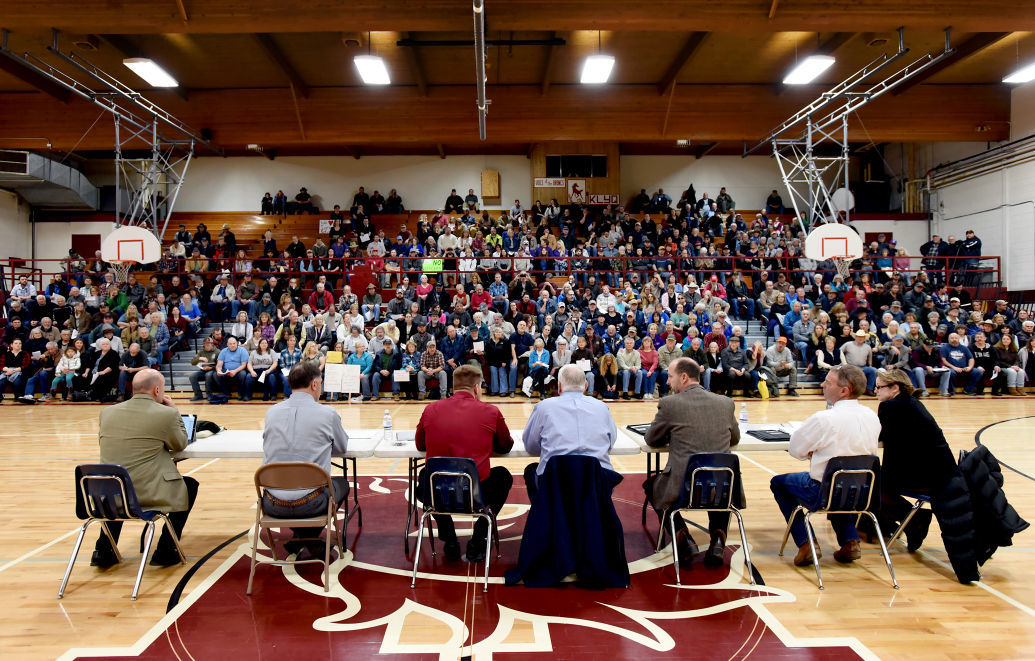 About 500 citizens showed up to the county commissioners’ meeting, forcing it to be moved to the Hamilton Junior High School gymnasium. 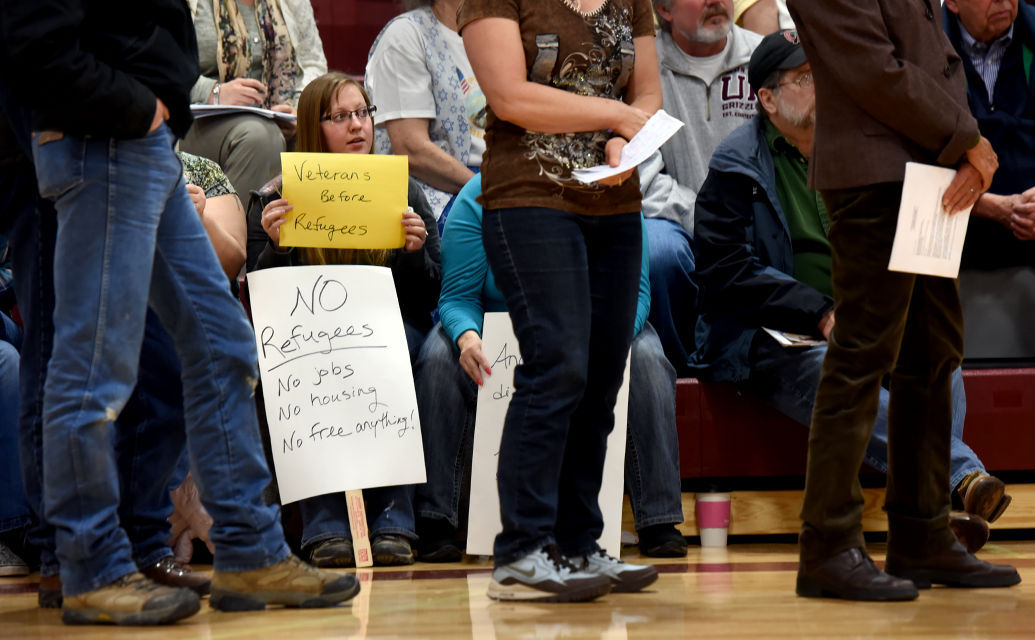 Kristie Macpherson holds a pair of signs expressing her views while a line forms in front of her of those waiting to tell the commissioners theirs.

HAMILTON – A public hearing on a proposed letter opposing the settlement of Syrian refugees in Ravalli County and the surrounding area drew hundreds Thursday afternoon.

The Ravalli County Commission hosted the meeting, which had to be moved three times to accommodate the crowd.

By the time the meeting was finished, the commissioners had heard enough to approve a modified version of the letter and expand its circulation to include the governor, Montana's congressional delegation and Missoula officials.

About 500 people settled into the bleachers at the Hamilton Junior High School gym for a meeting that garnered a large cheer when the commissioners announced it would begin with the Pledge of Allegiance and included a loud emphasis from the crowd on the words “under God” during its recital.

The commissioners recently released their proposed letter to the U.S. State Department that opposed the resettlement of Syrian refugees in the county and surrounding area. The draft letter expressed concerns about the community’s safety due to government’s inability to adequately vet the refugees to ensure they don’t belong to a terrorist organization.

Most of the people who spoke Thursday agreed with them.

Commission Chair Ray Hawk opened the meeting by saying they had received a good deal of correspondence on the issue, with a margin of about 50 to 1 in opposition to allowing refugees to settle in Ravalli County.

After a commissioner read the proposed letter, most people in the gymnasium rose to their feet and applauded.

But the first member of the public to come to the podium spoke in opposition to the commissioners’ letter.

Chris Love of Corvallis told the commission the federal government doesn’t determine where refugees go and the independent agencies that do typically send them where they have family members or to places where there are plenty of jobs, which Ravalli County lacks.

“I think the chance of folks being sent here is minimal,” Love said.

Rep. Nancy Ballance, R-Hamilton, said the resettlement of refugees is “big business” that generates millions of dollars for the organizations involved. She said the governor’s decision to allow Syrian refugees to settle in Montana was an effort to obtain some of that federal funding.

“He was saying Montana is open for business,” Ballance said. “Make no mistake about it, refugee resettlement is big business.”

Most of those of who commented weren’t focused on money.

Many said they feared radical Islam and the potential for terrorism. Some pointed to problems that European countries are having with refugees they have accepted. Others said this country needs to take care of veterans and the homeless first.

Hollis Poe of Hamilton told the commission he was starting a new organization called Advancing Conservatism.

Poe contended the issue really isn’t about resettlement of refugees. Instead, Poe said it's about setting the stage for martial law.

“ISIS will come after our women,” he said. “They are going to find that in Ravalli County, women pack weapons.”

Phil Liggins of Hamilton said that Allah and the God of the Bible were not one and the same.

Annie Edwards of Darby told the commissioners she had just opened a bakery. She said she knows those of “a particular faith” don’t believe that women should be able to run a business.

She wanted to know how the county was going to protect her and the two women who work with her from people who believe that she has no right to operate a business.

Jeremy Potter said he preaches the Gospel everywhere he goes and sees local people in need almost every day. He asked people who support bringing Syrian refugees to Ravalli County if they would be willing to open their homes to those in need from their own communities.

“I don’t see you out there helping take care of the ones who need help right now,” Potter said.

The few people who did step up in opposition to the county sending the letter were met with catcalls and heckling.

Bill Wasserman of Sula said he thoroughly disagreed with the commissioners’ letter and told the commission he can trace his ancestry back to a point where all his relatives were once refugees.

“I expect that nearly everyone here is a descendant of refugees,” he said.

Rick Lubansky of Hamilton said he was embarrassed by what he heard at the meeting.

Heather Lewis told the commission she hadn’t planned to get up and talk, but felt compelled after hearing the tone of the hearing.

“I am an American and a Montana woman, and I’m not afraid,” Lewis said.

If refugees do come to Ravalli County, she has no plans to change her lifestyle to accommodate their differences in culture.

“I know what my rights are,” she said. “I’m not a victim, and I don’t appreciate being put forth as one.”

Hawk told the crowd the commission doesn’t know how many refugees might actually come to Ravalli County.

“We don’t know if any would come into the valley at all,” Hawk said.

The meeting concluded shortly before 4 p.m. to allow for basketball practice in the gym.

The commissioners reconvened back in their meeting room where they voted unanimously to approve a version of the letter that added information about potential impacts to the community’s economy, culture, health, safety and welfare.

Commissioner Jeff Burrows said it didn’t take very long for the commissioners to come to that decision following the meeting.

“We heard loud and clear that people were concerned about impacts to the economy and infrastructure,” Burrows said. “From the commissioners’ point of view, this wasn’t about race or religion. This was about impacts to local services and impacts to public health, safety and welfare in Ravalli County.”

An anti-refugee rally is scheduled for 11 a.m. Monday on the steps of the Montana State Capitol.

A “March Against Hate” is coming to Higgins Avenue on March 1 to support refugee resettlement efforts in Missoula.

KALISPELL – The Flathead County commissioners this week joined their counterparts from Ravalli County, going on record as opposing the resettl…

Opponents of Missoula's quest to re-establish a refugee resettlement office in Missoula are "capitalizing on broader national fearmongering," …

UM to send students to Germany to cover refugee movement

This spring, the University of Montana will send 18 students to Berlin to cover the Syrian refugee movement.

Forty-seven Democratic state legislators have sent a letter of response to Republican colleagues who wrote to Gov. Steve Bullock last week, ur…

A group of Montana legislators is calling on Gov. Steve Bullock to block all Syrian refugees from entering Montana.

It arose from images depicting the brutality of the refugee crisis.

Gov. Steve Bullock emphasized the safety of Montanans “as my top priority,” but declined to join more than a dozen Republican governors who sa…

First anniversary: Missoula looks back, ahead on refugee resettlement program

They came from a crowded refugee camp in East Africa to the strange mountain town of Missoula.

Richard Paris holds a copy of the Quran on Thursday afternoon while speaking during a public hearing to the Ravalli County Commission to voice his support of a proposed letter opposing the settlement of Syrian refugees in Ravalli or any surrounding counties. Paris, a native of New York who lived there during the 9/11 attacks, warned the commissioners there are several passages in the book that “tell believers to kill non-believers.”

About 500 citizens showed up to the county commissioners’ meeting, forcing it to be moved to the Hamilton Junior High School gymnasium.

Kristie Macpherson holds a pair of signs expressing her views while a line forms in front of her of those waiting to tell the commissioners theirs.