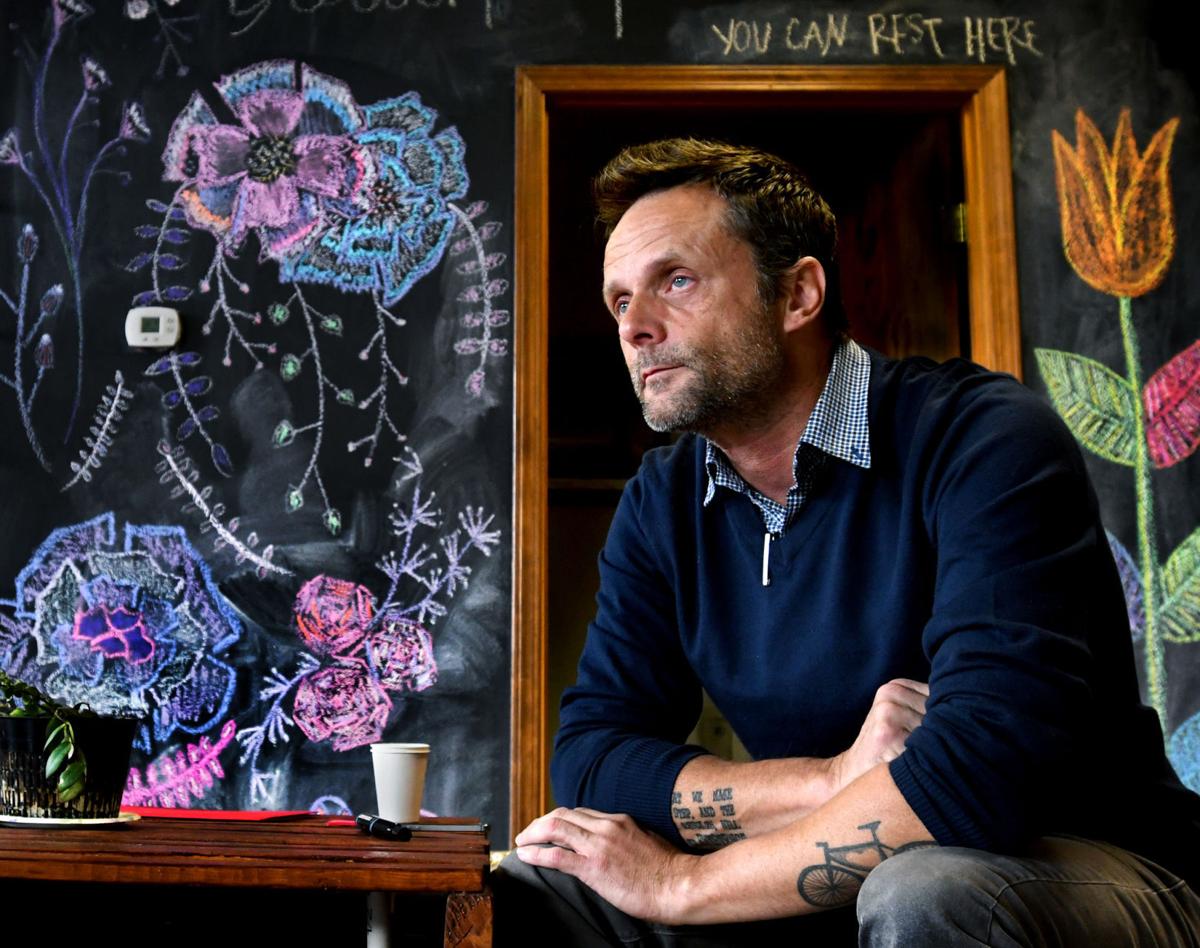 "This is my place," Craig Flint, a recovering meth addict, says Wednesday sitting in Missoula's Open Aid Alliance, the place he once depended on for clean syringes and non-judgmental support. "This is the best place. It's the best place on the planet." Flint, a former Missoula businessman now living in Houston, says the center "saved my life," and he is back in Missoula, sober now for the last 110 days, using his technology skills to help the nonprofit. 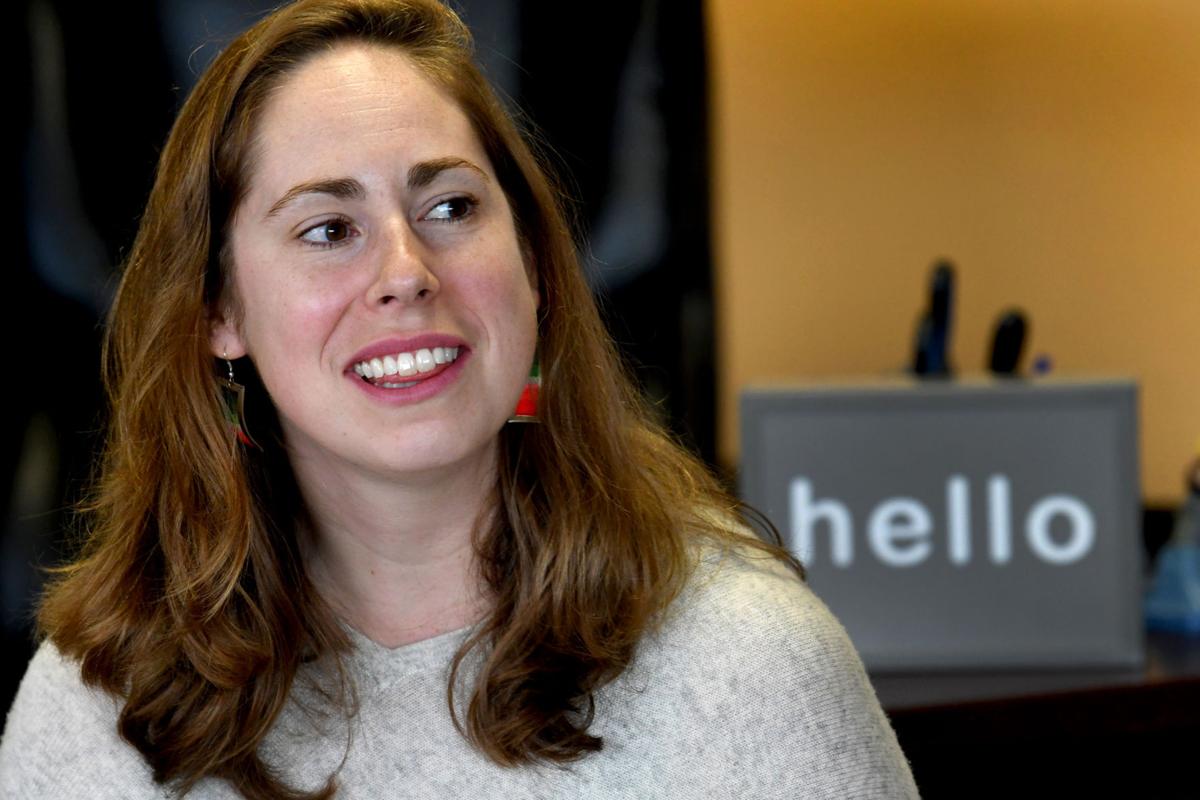 "Society at large looks down on people who use drugs, especially people who use injection drugs, and people who have mental health illnesses," says Stephanie Cole, director of programs at Open Aid. The compassion her organization shows, she says, comes partly from breaking down the stereotypes of people suffering from drug addition.

Craig Flint and his son, Jackson, cleared out a concrete ditch that runs behind homes in a high falutin' neighborhood in Houston, where on the weekends, the father and son skateboard together.

Jackson, 15, films their adventures and puts them on YouTube.

His son tells him "I love you," this teenager who left Missoula a year and a half earlier to get away from his father's addiction to meth.

Wednesday, Flint marked 110 days sober, a record in his book.

In Missoula this week on a work trip from Texas, the former owner of Computer ER here talked about the reason his veins are still intact, the way Open Aid Alliance saved his life, and the relationship he's rebuilding with Jackson.

"If I'm using, we have no chance together, him and I," Flint said.

The IT professional used to walk into Open Aid to get clean syringes, but this week, he was running cable at the office at 1500 W. Broadway, setting up a kiosk computer, and doing analysis of the data the nonprofit collects.

Open Aid Alliance is dedicated to "empowering people living with HIV, hepatitis C, and other health disparities and preventing new infections through testing, education and outreach."

The last time Flint had been with the Open Aid crew, he was high and telling his story of addiction at a fundraiser.

That was on Dec. 1, and sometime before he boarded a flight from Missoula the following day, Flint injected his last bit of meth.

On Dec. 5, a bank would foreclose on his house, and he planned to head to rehab in Houston, where he has family.

Flint started using at the age of 14 to fit in with his peers.

When he realized he could numb himself with meth, his drug habit grew, and he landed in jail in California after embezzling money to pay for it.

Later in Missoula, he shot up even as a business owner responsible for as many as six employees, even with a good job for a high-profile nonprofit.

When he threw his messenger bag over his shoulder and walked downtown into the Open Aid Alliance office, then on the north end of Higgins Avenue, Flint figured anyone looking at him took him for an IT guy.

He'd walk in the door and put clean syringes in his bag, with no one on the outside the wiser, and maybe more importantly, no one on the inside condemning him for addiction, a disease.

"I can open up here as a user," Flint said. "So it's one less thing I have to hide about my identity or my personality. Once I leave those doors, I am whatever I need to be to get through the day."

Eventually, he lost his big job, got a $40,000 severance in a lump sum, and started pumping it into his veins. He landed in the psych ward, spent time at the Missoula Recovery Center, had a clean spell of 95 days, but fell off the wagon again.

The only place he didn't feel shamed was Open Aid Alliance, where he had started providing some tech support. Last fall, when the head of Open Aid asked him to tell his story at the December fundraiser, he was floored.

"Why are you asking this freakin' drug addict to speak on your behalf?" Flint thought.

He also agreed right away. Flint talks about the nonprofit the way John Muir talked about mountains and Mother Teresa talked about faith.

"I will do anything I can for Open Aid Alliance in my power," he said.

The day after the fundraiser, Flint struggled to get on the plane.

He smashed belongings at home while his wife waited to take him to the airport.

He gave her the silent treatment.

But he couldn't stay in Missoula, where he was embarrassed to run into colleagues who knew him when he was a business owner, so he boarded.

He flew alone, and his friends and family wondered if he would choose to make his connection in Salt Lake City. He himself didn't know.

"I'd said I wanted to go to this place, but when the time came, I was so scared," he said.

He was hungry and without money, and he asked his parents, Jack and Anne Wallace, to bring food to the airport when they picked him up. Meanwhile, he hoped for his own demise, anything that meant he wouldn't have to face a new life.

"I was too afraid to go, but too afraid to not go. I was just hoping an accident would happen, and I would fall out of the sky, just anything that wasn't going to be my fault," Flint said.

He boarded, though, and when the plane landed, he paced the terminal in Houston, wondering to himself if he could avoid his parents, knowing he couldn't live in the airport.

Finally, he walked out. He doesn't remember the encounter with his parents well, but his dad may have been supporting his mom, giving her strength.

His mom handed him a burger, and he scarfed it down. Flint hadn't looked at himself in the mirror for a long time, but his mom's expression confirmed he looked horrible, sallow, thin.

"She was just so sad. And we didn't hardly talk. I didn't know what to say."

They dropped him off at a halfway house called the recenter.

Flint has gotten clean before, and he knew that if he could get through the first week to 10 days, he'd make it. So he slept while the poison worked through his body.

When he felt suicidal, he contacted Open Aid Alliance, the place that provided him everything from a drink of water to a counselor when he needed one, and above all, a haven that offered safety, lack of judgment.

He survived the detox, began a 12-step recovery plan, and started fixing things in his life.

He sees his parents every weekend.

He's rebuilding a relationship with his son and trying to help him return to Missoula.

"My son deserves anything and everything he would ever want for the rest of his life, in my eyes, for what he has put up with. He wants to be back up here. He grew up in Missoula."

He works remotely for Open Aid at his father's office, and he's saving money.

This week, he's back in Missoula finishing work for the nonprofit.

"I would have fired my ass a long time ago, and I would have said, 'Please just don't come back.' But these guys don't do that," Flint said.

He's forgiving himself for his lapses by staying clean and being there for his son, skating together in the ditch behind his parents' house. Eventually, he'd like to make it back to Missoula for good, but he doesn't have a deadline.

"At this point, we have such a lovely relationship," Cole said. "There's been a lot of highs and lows. We've kind of gone through it all together."

Joked Flint: "I will have to fire myself."

The compassion at Open Aid comes partly from breaking down some of the stereotypes about people with addiction, Cole said. Wednesday, Flint wore a collared button-down shirt with a sweater, and he looked much the same as when he was coming in for syringes.

The compassion comes, too, in the way Open Aid reminds all its volunteers and staff to be human with clients.

Part of the training is a simple personal exchange, Cole said: "If you do nothing else, make eye contact and smile with everyone who walks in the door."

Flint had wanted to work at a syringe exchange program in Houston, but such a harm reduction program doesn't exist. He ran into a friend who had used with him years ago, and his friend's veins are shot from using syringes sharpened on matchbooks for three months on end.

"If he has to go to the hospital or if he's in a serious accident and they have to give him an IV, they have to go through the bottom of his foot to find a vein," Flint said. "So his veins are all screwed up, and that's the result of not having access to what you need."

The exchange also means dirty needles stay out of garbage cans, off the streets, away from sanitation workers, away from police officers doing pat- downs, away from children and pets. Some 1,292 people are enrolled in the program, just one of the services at Open Aid, and they come from as far away as Billings, Helena and Spokane.

When Flint returned to Open Aid to finish the work he'd meant to complete months ago, Cole told him the wait wasn't as big a deal as he was making it out to be. Another friend told him he could forgive himself for his shortcomings as a father.

So he's working on it, working on being a better human, and for certain, he has role models, like the people at Open Aid who offer dignity and respect to all who come through the door.

"... I thought I was special the way they treated me, but they treat everybody this way."

From a naked ski jump that made headlines all over the world to late-night bankruptcy meetings to that time the bar burned down, the six-decad…

"This is my place," Craig Flint, a recovering meth addict, says Wednesday sitting in Missoula's Open Aid Alliance, the place he once depended on for clean syringes and non-judgmental support. "This is the best place. It's the best place on the planet." Flint, a former Missoula businessman now living in Houston, says the center "saved my life," and he is back in Missoula, sober now for the last 110 days, using his technology skills to help the nonprofit.

"Society at large looks down on people who use drugs, especially people who use injection drugs, and people who have mental health illnesses," says Stephanie Cole, director of programs at Open Aid. The compassion her organization shows, she says, comes partly from breaking down the stereotypes of people suffering from drug addition.