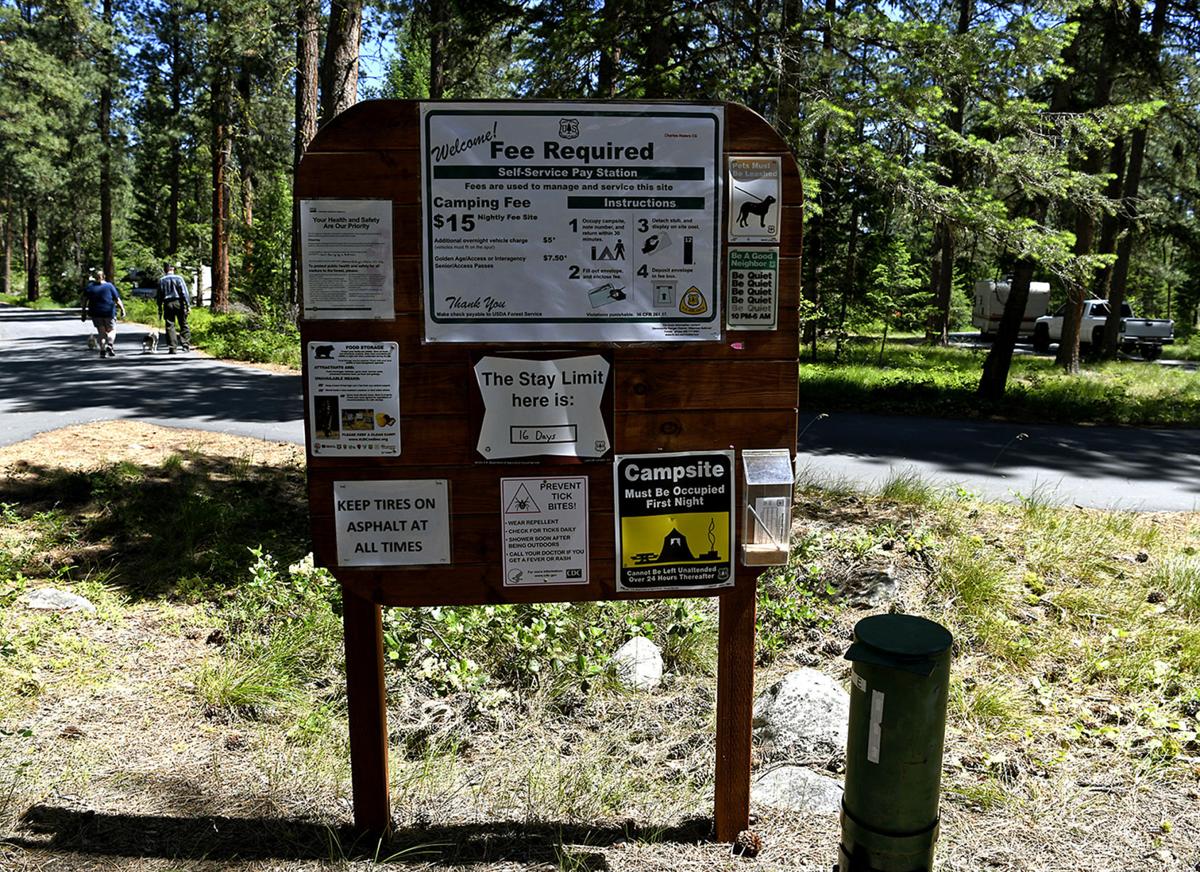 People camping at the Charles Waters Campground in the Bitterroot National Forest have numerous spots from which to choose. A new study looks at why campers prefer some campsites over others. 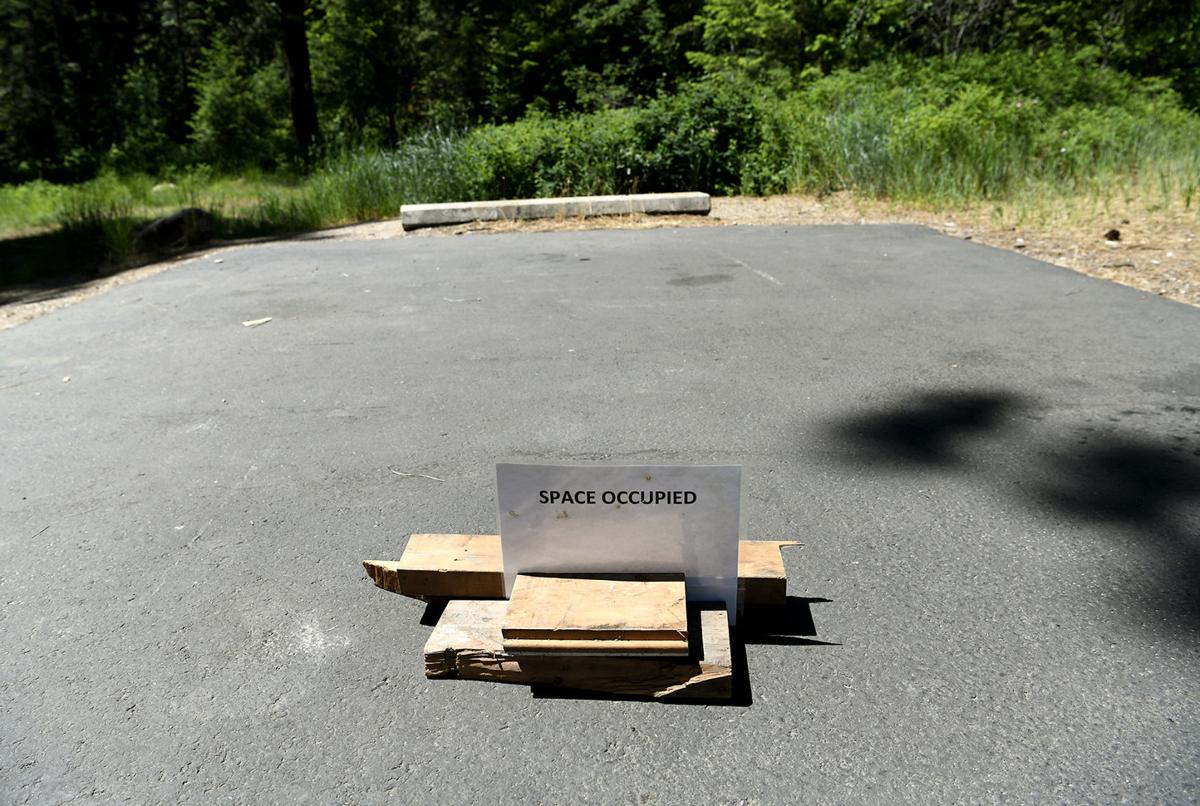 A sign at a campsite in the Charles Waters Campground alerts others that the space is already taken. 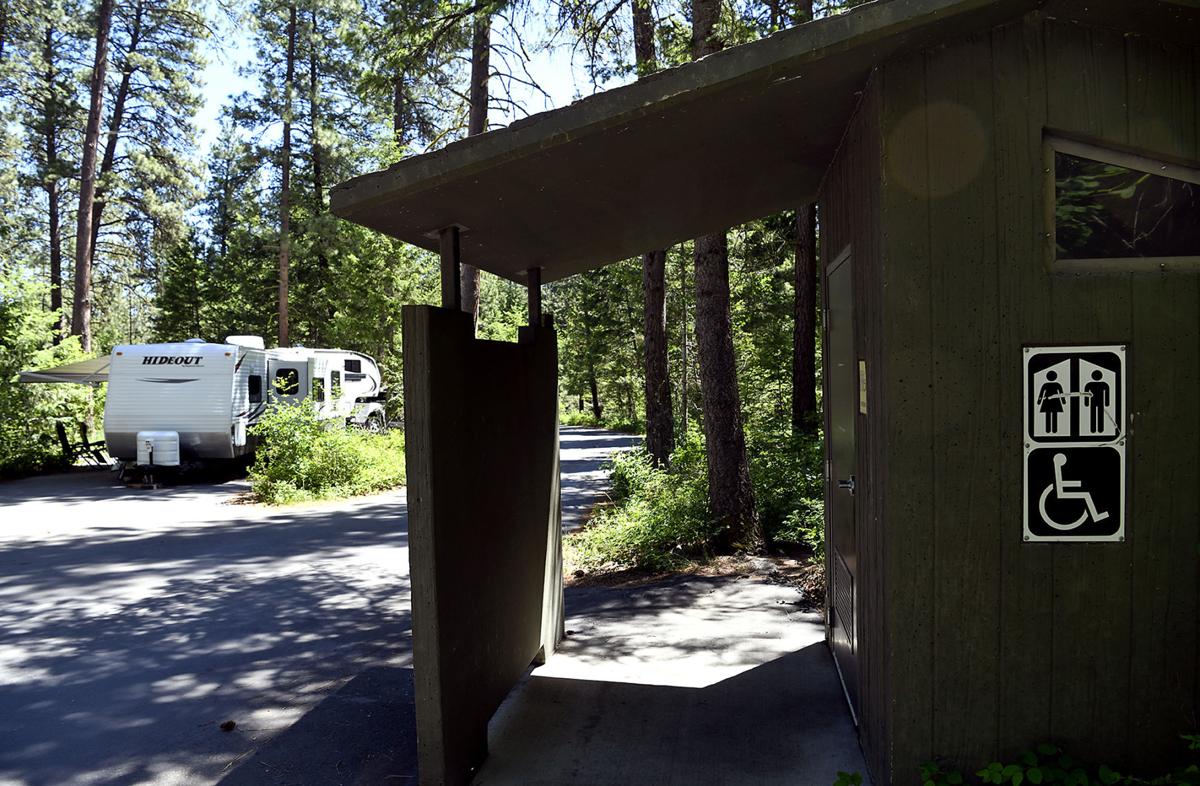 Proximity to a restroom can be a reason campers may choose one site over another.

Somewhere between dirtbagging and glamping, Recreation.gov has revealed what we really want in a campsite.

And it's proximity to a power plug, maybe more than scenery, that we seek.

“We tend to think of park settings as places where people want to find solitude,” said Will Rice, a University of Montana assistant professor studying outdoor recreation. “When I look for a campsite, I want a little privacy and to not hear my neighbors. But that was not a driver of demand. Really packed-in campsites are just as in demand as more dispersed sites. And good views didn’t matter as much as price and access to electricity.”

Rice knows this because the federal reservation portal Recreation.gov makes all its trend data public (minus the personal details). Every national park campground booking, every river float permit, every fire lookout rental, can be fed into Rice’s computer for big-data analysis. So he and co-author Soyoung Park of Florida Atlantic University looked at 23,000 reservations to see what we really want from a public lands overnight visit.

Specifically, Rice and Young looked at 179 campsites in Zion National Park’s Watchman Campground in Utah. It splays along the Virgin River, close between the park entrance and the main visitor center. As of June 17, only three days in July have campsite reservations available. A two-night stay on July 25-26 has just a single group tent site for $90 a night (no electric service). The average July temperature in that part of Utah is 100 degrees.

Rice said the research can guide park managers’ building decisions. For example, the Zion analysis indicates campers would tolerate denser spacing of sites in an existing campground, relieving the need to build a new site elsewhere to address demand.

“There’s only two or three papers written out there about this,” Rice said. “For the last five decades, we’ve been asking people these questions about what matters to them and how they rank the most important attributes. We get more accurate findings when they’re actually putting their money on the line to get a campsite.”

Naturally, the law of unintended consequences gets involved. As Recreation.gov got more established, whole summer seasons would get booked up within 8 minutes of the reservations portal opening. Several internet start-ups arose to hack the process, offering bots that would digitally wait in line for people and repeatedly post applications until they secured a booking.

Public land managers have managed to defeat many of the bots. A few, like Campnab.com, have endured. It charges $10 to $20 per reservation, or users can subscribe for a monthly fee of up to $50 to scan multiple parks or dates.

Another issue gets filed under distributive justice. Montana campers heading to popular places like the Forest Service campgrounds along Seeley, Inez, Alva and Rainy lakes are familiar with the ploy of sending a family member up Thursday night to squat on a prime spot for a weekend gathering. Everybody who hoped to grab a tent site after work on Friday finds they’re outfoxed.

With the internet, the problem gets economically perverse.

“For some people, $20 per campsite is a really low price, and easy to afford,” Rice said. “So you get people who book a campsite for two weeks, and then be there for only one or two nights. For them, the price is low enough, they don’t see a problem to put down hundreds of dollars to ensure a space. But then high-demand campsites go vacant for days.”

The study is published in the Journal of Environmental Management. Rice said he plans to scan reservation details of Glacier and Yellowstone national parks soon. Last year’s pandemic kink in tourist activity puts an odd asterisk on the trend data. But it may also offer a remarkable comparison between extremely low-demand and high-demand seasons.

“In a community like Missoula, people who are using Recreation.gov know they have to book stuff really far in advance,” Rice said. “Now if you want a campground on Memorial Day, you have to book it back in March. It matters to a lot of people.”

Pygmies in the depths: Tiny whitefish poses riddles for biologists

Politics more than math may define what counts toward the plan to conserve 30% of the nation’s land and water resources by 2030.

Because a story never came true, that doesn’t make it fiction.

Out of time: Wildland firefighters brace for start of busy season

Motorists can now travel the complete 50 miles between West Glacier and St. Mary over Logan Pass.

The inversion should lift by Monday afternoon as new breezes blow in, but if surrounding fires produce more smoke, that could get added to the mixing process and degrade air quality again by Monday evening.

Missoula fire danger up to 'extreme' as dry air persists

Land managers across western Montana raised their fire danger ratings to “extreme” on Tuesday as hot, dry weather patterns entrenched over the border with Idaho.

More dead or dying fish are being found in some of Montana’s most popular angling destinations this summer, including the Bitterroot, Clark Fork, Big Hole, Beaverhead, Jefferson and many others.

People camping at the Charles Waters Campground in the Bitterroot National Forest have numerous spots from which to choose. A new study looks at why campers prefer some campsites over others.

A sign at a campsite in the Charles Waters Campground alerts others that the space is already taken.

Proximity to a restroom can be a reason campers may choose one site over another.