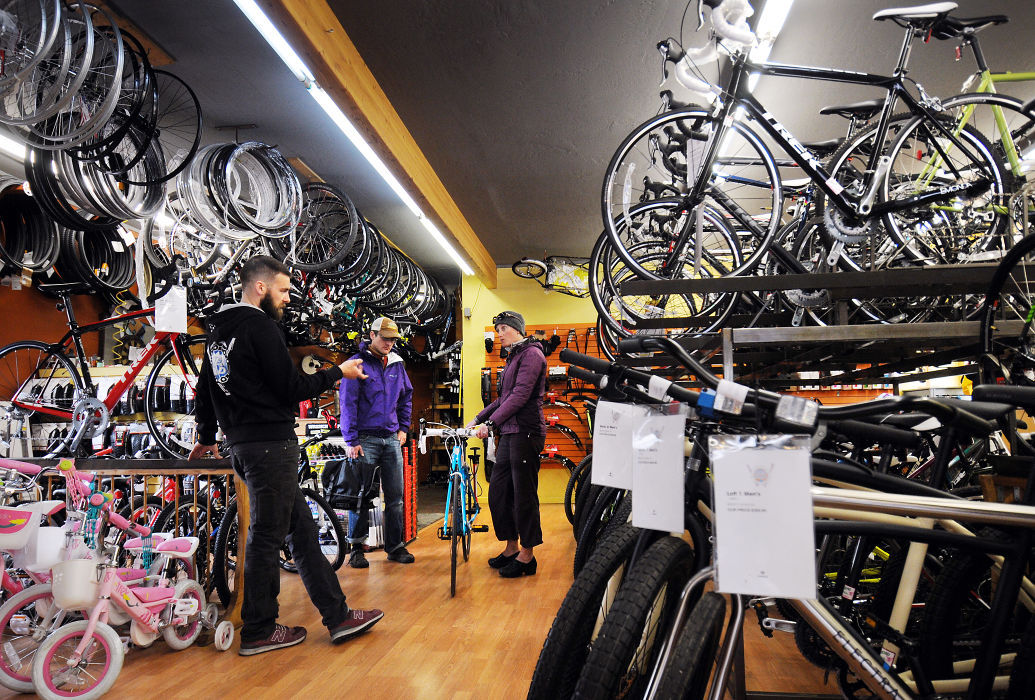 Andrew Plant, left, of Open Road Bicycle and Nordic, walks Ryan and Colleen Stiles through the purchase of a new road bike Friday afternoon at the Orange Street shop in Missoula. A recent report from the Small Business Majority, outdoor recreation creates 64,000 jobs in Montana and pumps billions of dollars into the state economy. 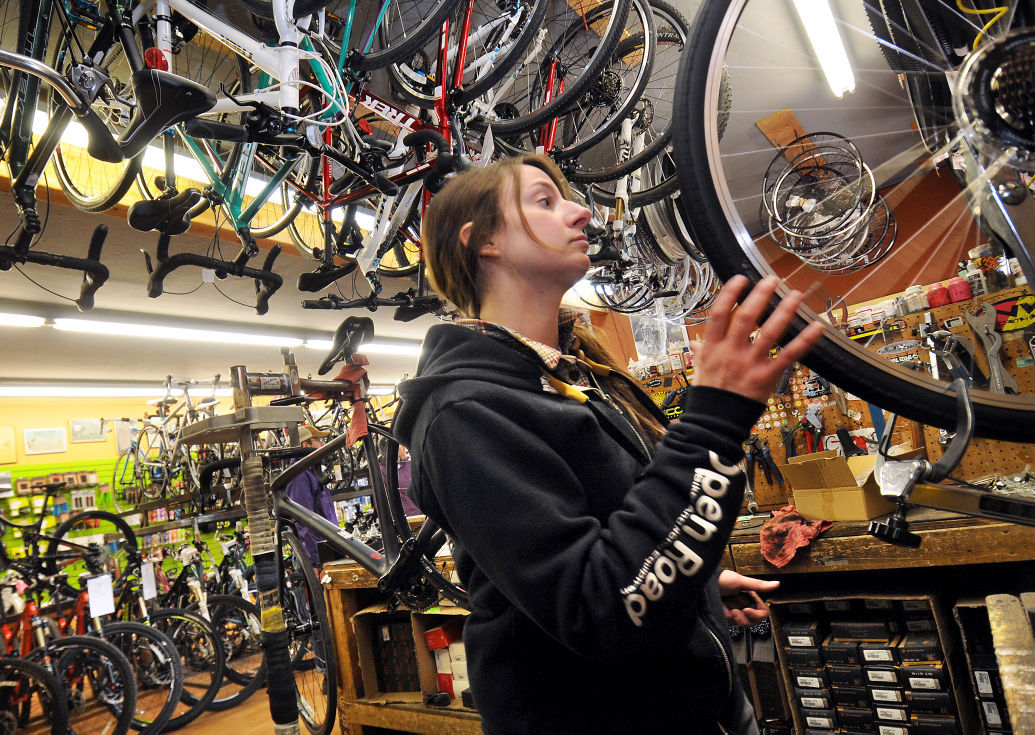 Jamie Ahre of Missoula tunes up a bike at the Open Road shop Friday. Ahre has worked for Open Road for three years.

Outdoor recreation contributes to $5.8 billion in consumer spending, 64,000 Montana jobs, $1.5 billion in wages and $403 million in state and local revenues, according to a recent report from the Small Business Majority, a national advocacy organization.

The report, titled “A Small Business Voice for Public Lands in the West,” examines the importance of public lands to the economy in Montana, New Mexico, Colorado and California.

More than seven out of 10 Montana residents participate in outdoor recreation on Montana’s 30 million acres of public lands each year, in addition to tens of thousands of tourists who travel from around the world to enjoy the state's natural resources.

Nearly three-quarters of Montana business owners believe the government can protect land and water and have a strong economy with good jobs, and nearly nine in 10 say national parks, forests and wildlife areas are an essential part of Montana’s economy.

“It’s clear that outdoor recreation connected to fish and wildlife is vital to our quality of life and to our state’s economy,” said Jeff Hagener, director of Montana Fish, Wildlife and Parks. “Montanans know the state’s economy is tied to the health of fish and wildlife resources that depend on our 30 million acres of public land. Montana’s hunters and anglers support hundreds of small businesses drawn here by the beauty and opportunities associated with public lands and easy access to them.”

A recent poll conducted by Business for Montana’s Outdoors found that more than 70 percent of businesses in the state cite public lands as a major factor in their decision to expand or start a business here.

The report recommends that the federal government formally track jobs in the outdoor recreation industry and that Congress fully fund and reauthorize the Land and Water Conservation Fund to help sustain small businesses and communities in the West.

The Land and Water Conservation Fund is funded by royalties from federal off-shore oil leases and the money is available for matching grants to purchase fish and wildlife habitat.

Since it was started half a century ago, the LWCF has provided about $16 billion for conservation projects, including about $400 million in Montana. The Blackfoot-Clearwater Game Range north of Ovando is an example of LWCF funding.

The Senate Energy and Natural Resources Committee held a hearing April 22 to examine possible ways to limit the use and effectiveness of the LWCF, a 50-year-old program that will expire Sept. 30 without congressional reauthorization.

On March 4, U.S. Sen. Jon Tester, D-Mont., signed on as a co-sponsor to a bill, S. 388, that would permanently reauthorize the Land and Water Conservation Fund.

The bill would eliminate LWCF’s expiration in favor of permanent authorization. It would also ensure that the greater of 1.5 percent or $10 million of the fund’s annual appropriation go toward securing recreational public access to existing federal lands.

Republican Montana Sen. Steve Daines' perspective on the bill is a bit cloudier.

On Jan. 29, Daines attempted to attach an amendment to the Keystone XL pipeline authorization bill prioritizing LWCF for the Senate but not actually authorizing it. Daines has said he supports the fund, but would like to look at ways to improve the program’s structure and efficiency.

Opponents of Daines’ stance have said LWCF works well the way it is written.

The Daines amendment failed 51-47, with Tester among those voting against.

Surveys conducted by the SBM found that business owners cited the outdoors as a more appealing reason to start a business in the state than tax rates, access to raw materials, quality health care and utility costs.

A study by Headwaters Economics found that between 2000 to 2009, Montana created nearly 4,500 net new firms, and the number of businesses per 1,000 people grew by 6 percent, compared with a loss of 3 percent nationally.

Water pipeline to Calif. is right thing to do

OK, who is going to step to the plate and start building water pipelines to California? Right now they need our help. Last time I looked, Cali…

“It is not fair to ask of others what you are not willing to do yourself.” —Eleanor Roosevelt

MISSOULIAN EDITORIAL: Time to back LWCF talk with action

There's a good chance your favorite fishing access site was made possible by the Land and Water Conservation Fund. Your favorite park, field a…

GOLD CREEK – In the middle of a stand of old-growth ponderosa pine in the Gold Creek drainage, nature conservationists had every reason to cel…

Andrew Plant, left, of Open Road Bicycle and Nordic, walks Ryan and Colleen Stiles through the purchase of a new road bike Friday afternoon at the Orange Street shop in Missoula. A recent report from the Small Business Majority, outdoor recreation creates 64,000 jobs in Montana and pumps billions of dollars into the state economy.

Jamie Ahre of Missoula tunes up a bike at the Open Road shop Friday. Ahre has worked for Open Road for three years.