Become a Member
Read Today's E-edition
Share This
Report: Missoula was 10th most soot-polluted city in nation between 2012-2014
0 Comments
Share this
1 of 2 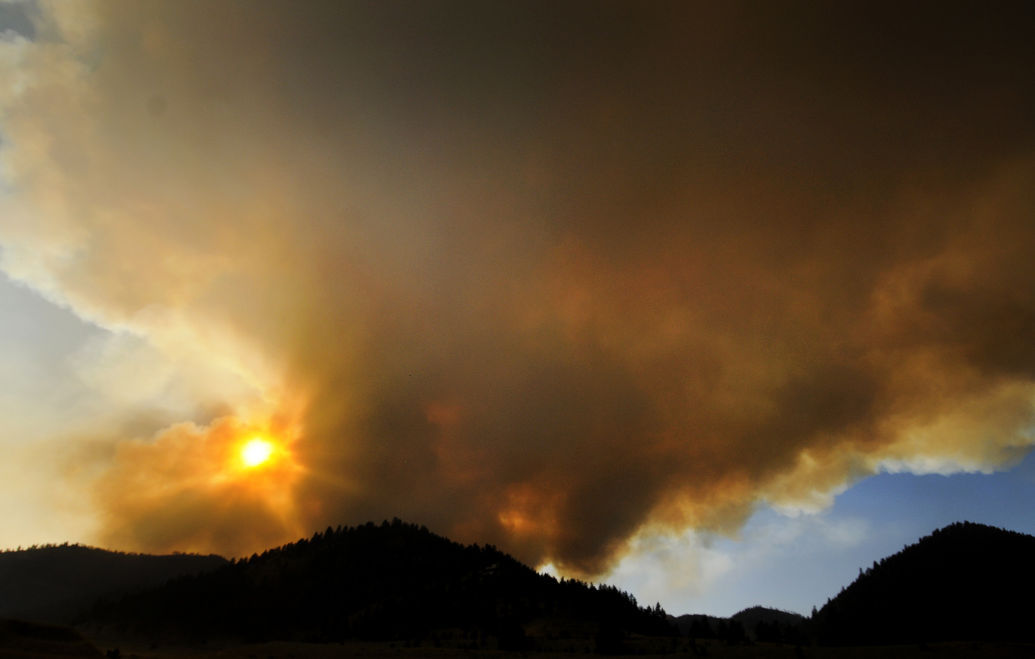 The Lolo Creek fire in August 2013 puts up a plume of smoke over Missoula. 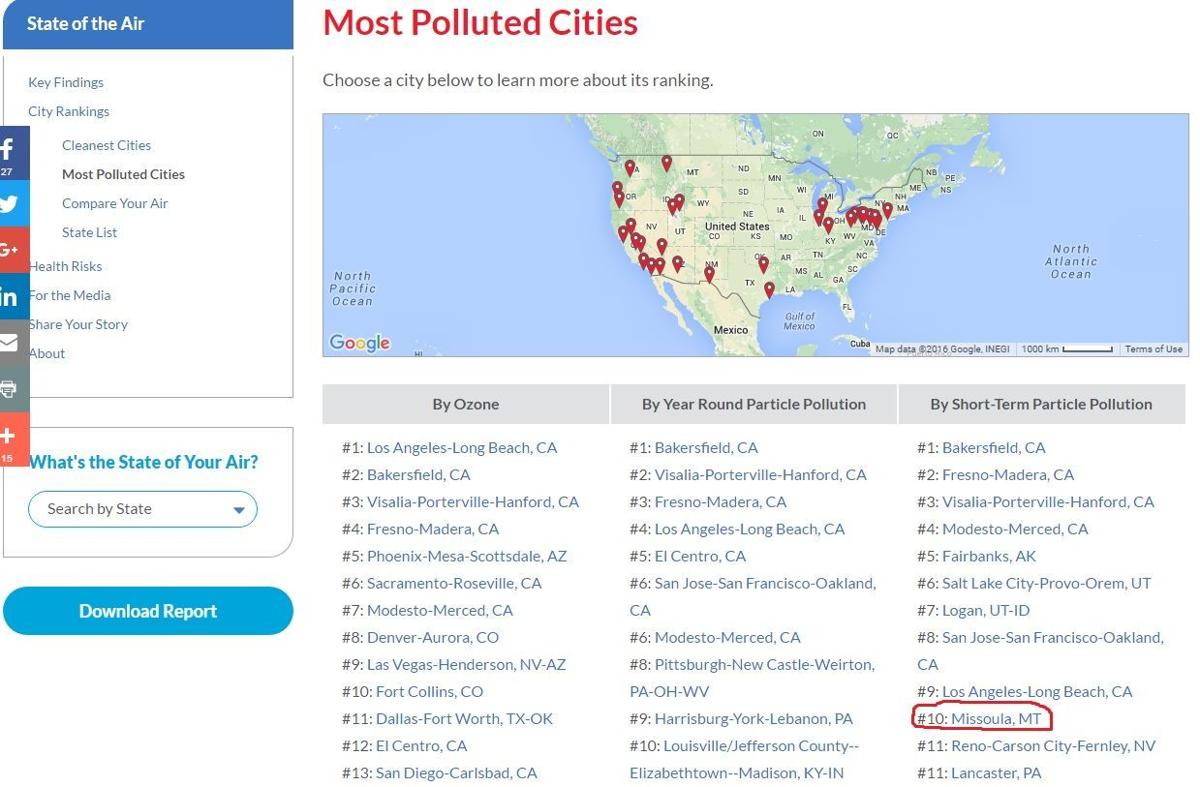 The American Lung Association's annual report is available at www.StateOfTheAir.org.

Wildfire smoke is damaging the lungs of western Montanans, according to a report released Wednesday, and it’s only getting worse.

The annual “State of the Air Report” defines short-term particle pollution as the weighted average number of days with unhealthy pollution of fine particulate matter, also known as soot. Each particle is smaller than 1/30th the diameter of the human hair, which allows them to get past the body’s natural defenses.

Missoula County reached its worst-ever levels of unhealthy short-term particle pollution days, increasing from a weighted average of 8.2 to 9.2 days. Missoula, Ravalli, Silver Bow and Lewis and Clark counties all received a grade of “F” from the American Lung Association for short-term particle pollution levels. Ravalli County ranked the eighth-most polluted county not part of a metro area. Flathead County got a “C”, while Lincoln County got a “B.” Despite a national trend toward improved air quality, spikes in short-term pollution appear to be getting worse in western states.

The data comes from Department of Environmental Quality monitors for both ozone, known as "smog," and fine particle pollution. Missoula had no unhealthy smog days in that time period, and ranks as among the cleanest cities for smog in the country.

There were dozens of small and large wildfires between 2012 and 2014 that sent smoke pouring into the Missoula Valley, including the 10,000-acre Lolo Complex fire of August 2013.

“Climate change is posing a special challenge when it comes to our air quality and making it harder for us to clean up particulate pollution and protect public health,” said Ronni Flannery of the American Lung Association in Montana. “Many of our particulate pollution spikes can be directly linked to longer and more severe wildfire seasons, which are likely to increase because of climate change.”

CASPER, Wyo. — The Rocky Mountains should brace for more, bigger fires, if history is any in…

Flannery said the rise in short-term particle pollution shows how major changes in temperature, drought and rainfall are affecting public health. She added that wildfires and drought, along with the use of wood-burning devices for heat and stagnant weather patterns that concentrate pollution in some areas contributed to the extraordinarily high numbers of days with unhealthy particulate matter in Montana.

Wildfires aren’t the only source for particle pollution, which is a lethal air pollutant made up of microscopic specks of soot, metals, acids, dirt, pollen, molds and aerosols that are tiny enough to inhale. Particles come from wide-ranging sources, including wood stoves, coal-fired power plants and industrial boilers. Flannery said particle pollution levels can spike dangerously for hours to weeks on end (short-term) or remain at unhealthy levels on average every day (year-round). Particles penetrate deep into the lungs and even into the bloodstream where they can lead to premature deaths, asthma attacks, heart attacks and strokes, as well as cause lung cancer and reproductive and developmental harm. Children, adults older than 65 and people with respiratory conditions are affected most severely.

“When we think about air quality and the challenge of cleaning up our air, we ought first to consider the health of those most at risk in our communities,” said Flannery. “If our air is not safe for everyone to breathe, we need to be doing more.”

According to the Montana Department of Public Health and Human Services, about 1 in 11 Montanans currently have asthma and 6 out of 10 adults and children with asthma report symptoms suggesting their asthma is not in control.

Flannery said the ALA has solutions in mind, including requiring the EPA to continue to clean up power plants to reduce ozone that blows across state lines. She said the ALA’s stance is that the states need to develop and implement strong plans to reduce carbon pollution from power plants, and that Congress needs to adequately fund the work of the EPA and the states to monitor and protect people from air pollution and ensure the Clean Air Act provisions remain strong and enforced. The organization also believes the EPA needs to adopt health-based protective measures to reduce harmful emissions of methane and other toxic pollutants from oil and natural gas systems.

“If we can do more to save lives – we should, and we can,” Flannery said. “The Lung Association in Montana calls on the State of Montana to adopt protective Montana-based clean energy solutions that reduce the carbon pollution that worsens climate change and harms health.”

The full report, all county grades and methodology are available at stateoftheair.org.

From catastrophic wildfires to prolonged smoke exposure to flood potential to drought forecasts, climate change has massive implications for t…

Despite the overwhelming evidence that climate change exists and that it is fueled largely by human activity, denial persists. Its partisans m…

The recently finalized Clean Power Plan is an essential tool in addressing climate change and a step forward in protecting children’s health. …

Cleaner energy can mean climate justice for fossil-fuel workers, too

Whether first or sixth generation, Montanans care for each other. We treat our state as a common family home, and transcend our differences to…

We joke that everyone argues about the weather but never does anything about it. When we argue about climate change, it appears we do do somet…

BILLINGS – The U.S. Environmental Protection Agency is reversing a 2013 finding that Montana's largest city was out of compliance with air pol…

BILLINGS – The U.S. government has reached an agreement to end a dispute over greenhouse gas emissions from federal oil and gas leases in Mont…

WalletHub.com, a personal finance website which ranks American cities and states six ways to Sunday, had this to say on Tuesday:

The Missoula area has been named the 11th most-polluted city in the United States for annual particle pollution, and the fifth-most polluted f…

The Lolo Creek fire in August 2013 puts up a plume of smoke over Missoula.

The American Lung Association's annual report is available at www.StateOfTheAir.org.