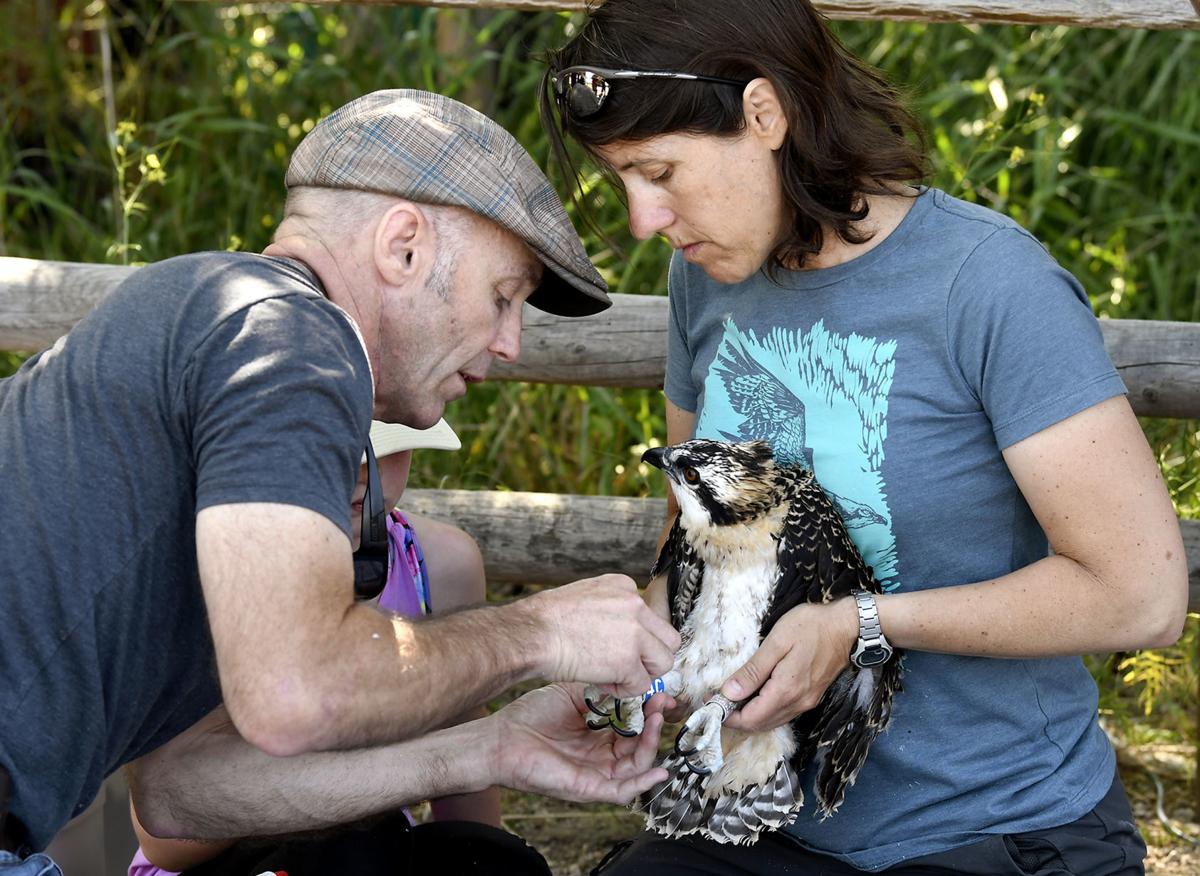 Rob Domenech and Dalit Guscio band an osprey chick from the nest at Dunrovin Ranch in Lolo on Tuesday. The researchers took samples and banded two chicks from the nest before returning them. 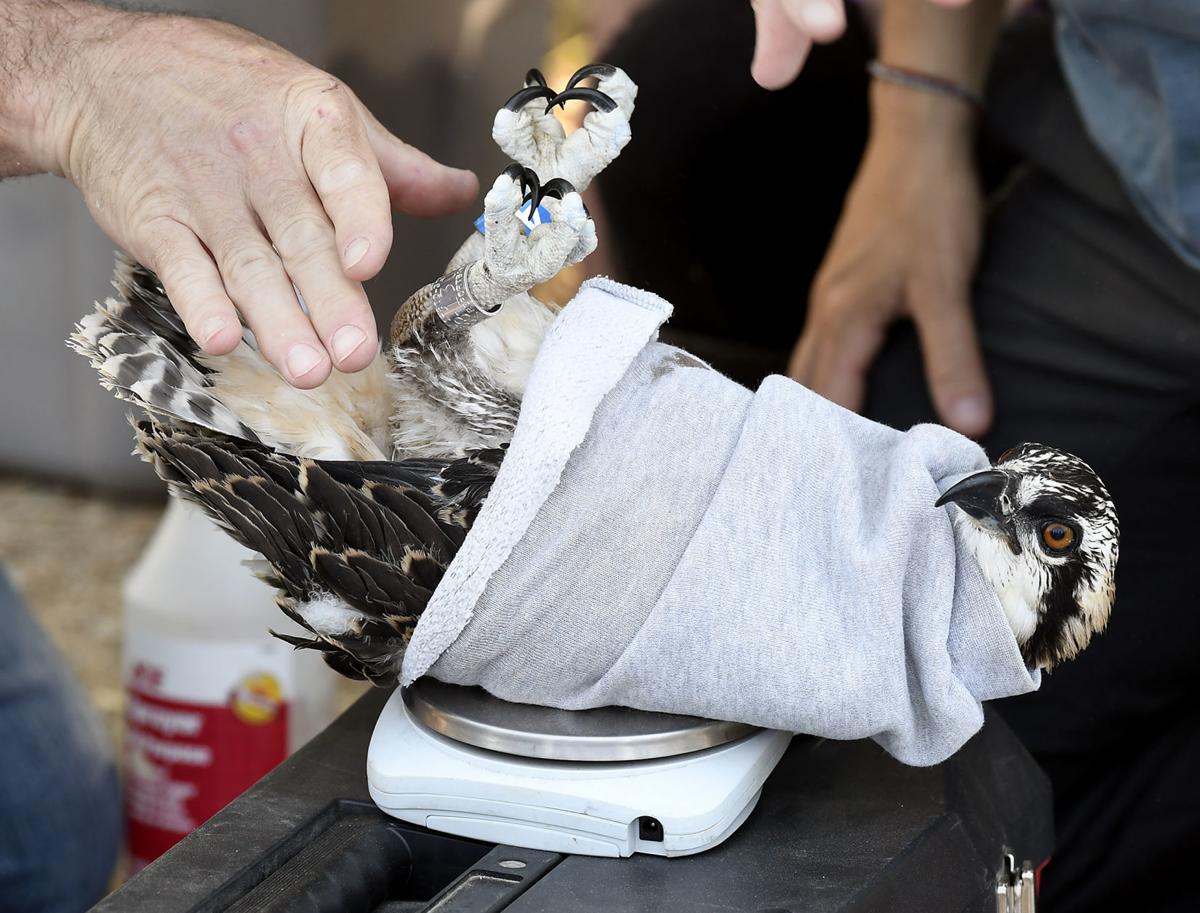 One of the osprey chicks is weighed by researchers before being returned to the nest. 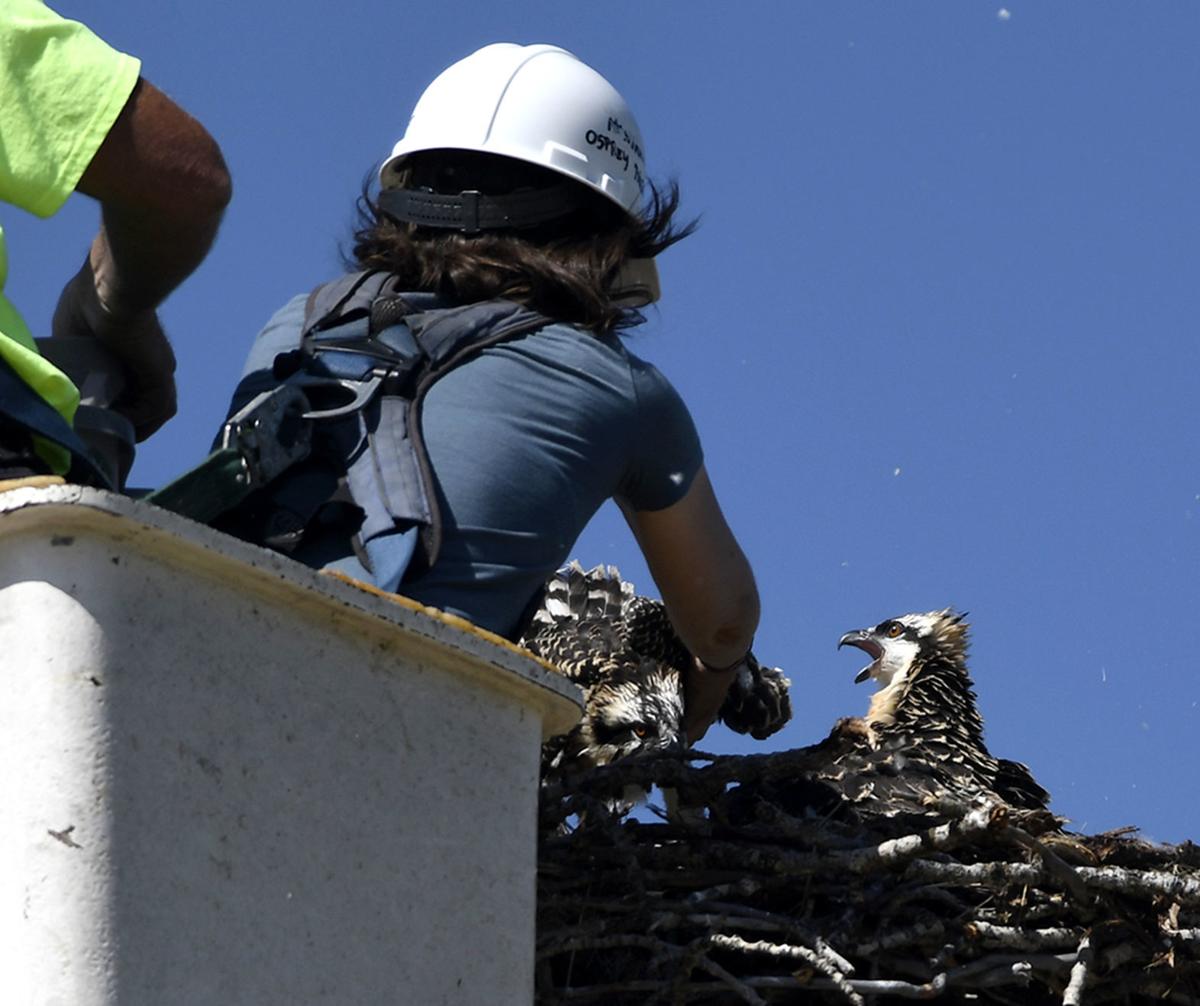 Dalit Guscio places the osprey chicks back in the nest at Dunrovin Ranch in Lolo on Tuesday.

Rob Domenech and Dalit Guscio band an osprey chick from the nest at Dunrovin Ranch in Lolo on Tuesday. The researchers took samples and banded two chicks from the nest before returning them.

One of the osprey chicks is weighed by researchers before being returned to the nest.

Dalit Guscio places the osprey chicks back in the nest at Dunrovin Ranch in Lolo on Tuesday.

Domensch, executive director of the Raptor View Research Institute, explained what they were doing and why, as kids asked questions such as, “Will this band be tracked?” and “Is that the only baby?”

Domensch carefully slipped a cloth tube over Congo before taking a blood sample. “This is not easy business,” he said to the kids.

During the banding process, Domensch and Guscio, the restoration education program manager at UM, explained that the bands were not put on until the osprey were nearly full-grown, ensuring that the bands would fit comfortably throughout the birds' life.

The bands allows the birds’ migratory patterns to be tracked. Domensch said some of the osprey banded in Montana have been seen as far south as Texas and Mexico.

The birds were then weighed, with each coming in at about 3 1/2 pounds.

“How can you tell if it’s a boy or a girl?” one child asked. Domensch said it can be difficult to tell when the osprey are young, but the females are bigger and stronger than the males. He said he thinks that is because the female osprey are tasked with taking care of the young and protecting the nest from predators.

People from around the world watch webcams trained on the osprey at Dunrovin, said Kelli Kozak, ranch manager. They’ve received emails from as far as France, Hungary and Uruguay.

Kozak remembered one woman from Washington state who cried when she saw the nest. On Tuesday, Sharon Leigh Miles was there from South Carolina to see the birds. Miles has been a remote camera operator since 2015.

She said she loves the osprey. “They are truly incredible birds,” she said.

The Montana Osprey Project through the University of Montana, the Raptor View Research Center and the Cornell Lab, has been studying osprey ecology and toxicology since 2006. Along with the project’s research goals, it also strives to educate the general public. Domensch said they seek to provide an interactive curriculum that can be used by teachers like Wardisiani.

The project is funded through the Natural Resource Damage Program. Using the blood sample, researchers can tell the quality of water and health of the fish the birds have been eating. Osprey are perfect for the job because they are apex predators, at the top of their food chain, and therefore are highly susceptible to bioaccumulation of toxins through the food web.

Researchers specifically test for heavy metal loads, based on the metals found in the Berkeley Pit Superfund site in Butte. They’ve found the cleanest nests to be in the upper Clark Fork. Alarming levels of mercury have been found in Flint Creek near Drummond. Which makes sense, Guscio said, because mercury is used in gold mining. Drummond was once a booming gold mining town.

Guscio said that before this discovery they did not know mercury was a problem. She said the next question to answer is how the osprey are affected by mercury, which is toxic in humans.

Domensch said he couldn't imagine what was going to happen when he started the Raptor View Research Center, which began with the help of his uncle's boom truck. Now, 500 osprey later, they've conducted vital research and exposed children and people all around the world to birds they may never have known about otherwise.

"I feel very fortunate to be a part of it," he said.

Michaelyn McDonnell, atop her horse Magic, came over the North Hills behind the Moon-Randolph Homestead followed by nearly 150 sheep on Monday.