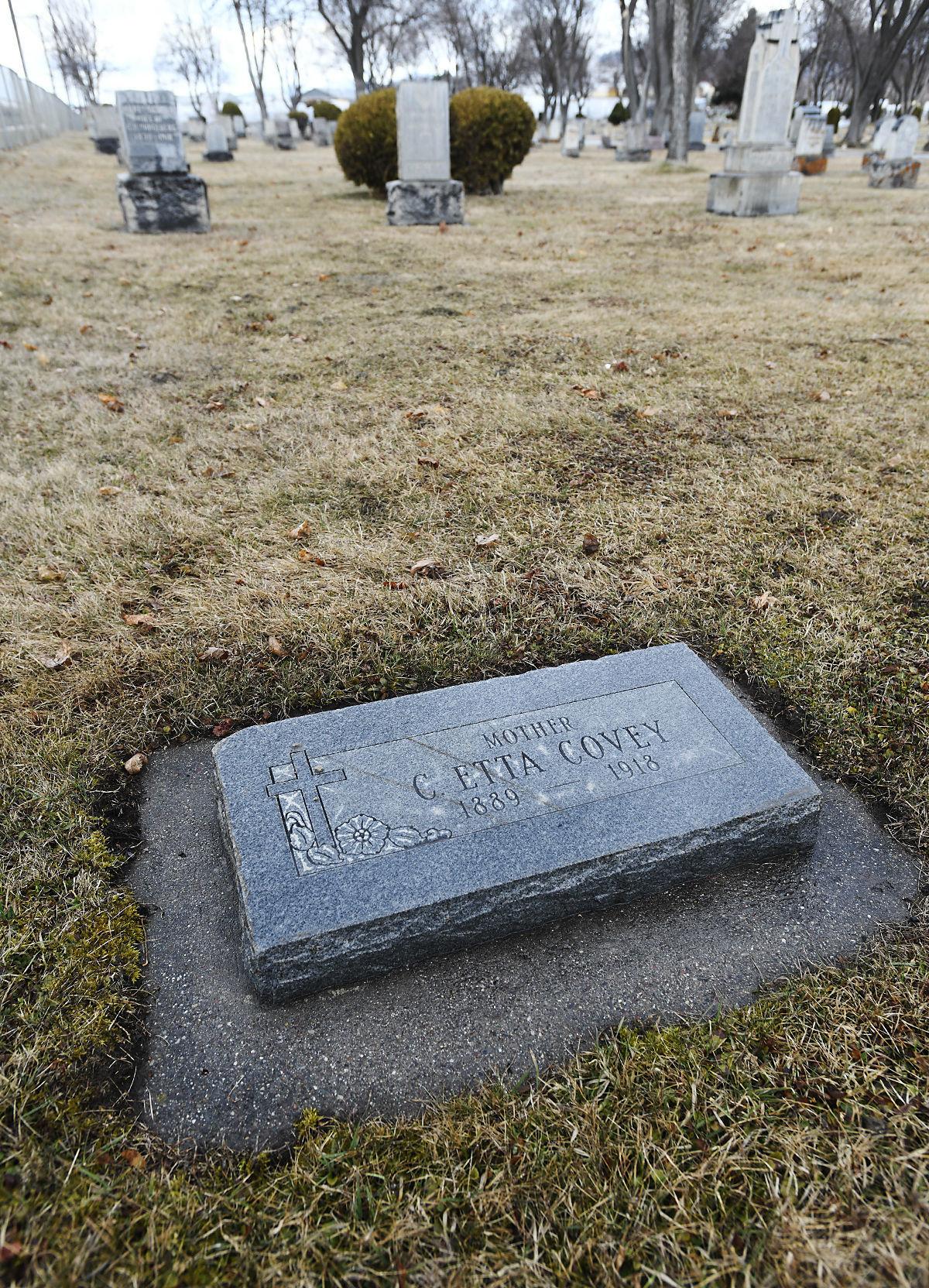 Etta Covey of North Dakota, had been in Missoula only a few days when she succumbed at St. Patrick hospital on Oct. 20, 1918, to pneumonia after contracting the Spanish influenza. Covey left behind her husband, Harry, and two children aged 4 and 2. Her 17-year-old brother, Chester Fuller, was hospitalized at St. Pat's at the time with the same maladies. He died three days later. They're buried side by side at the Missoula Cemetery. 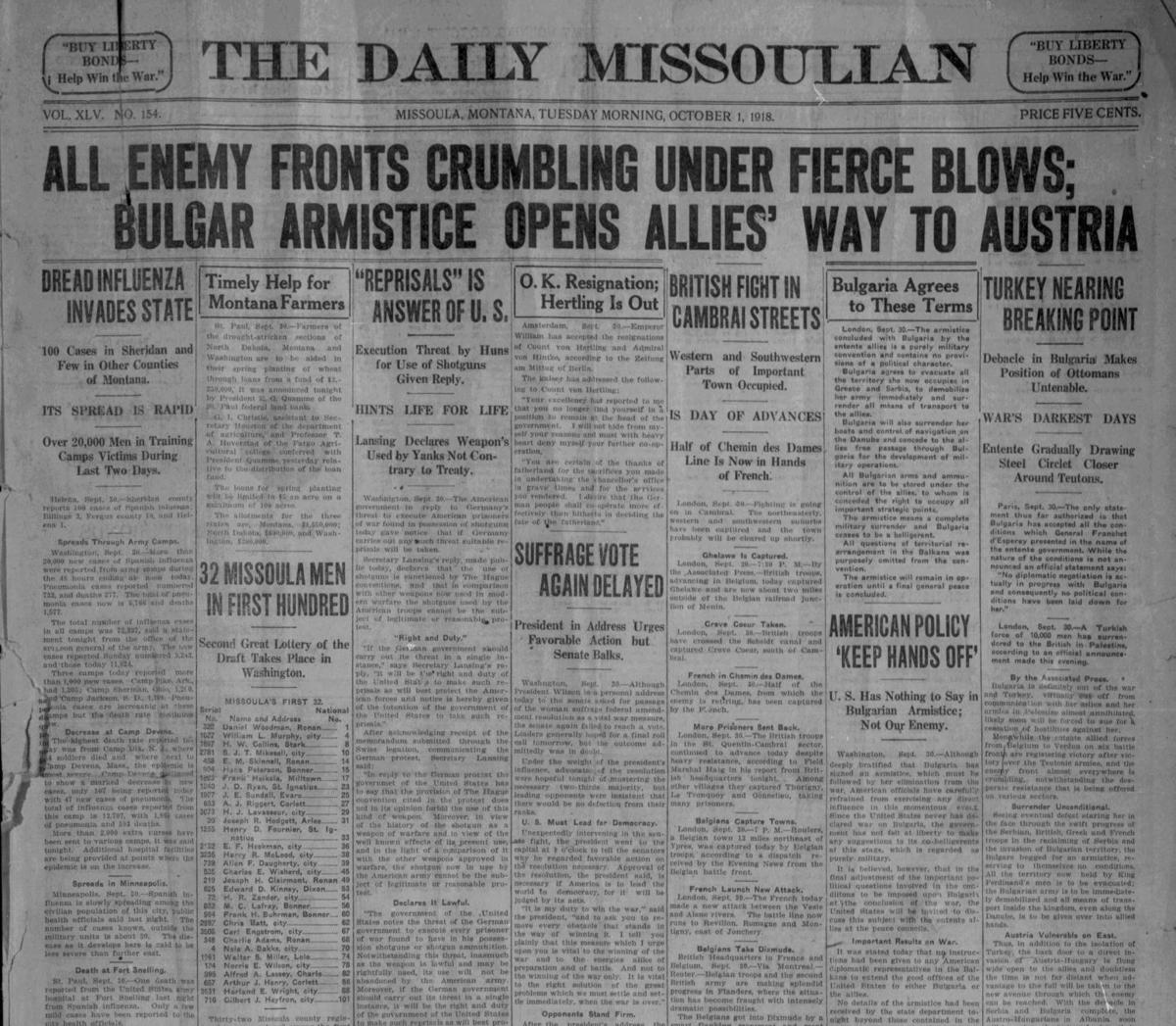 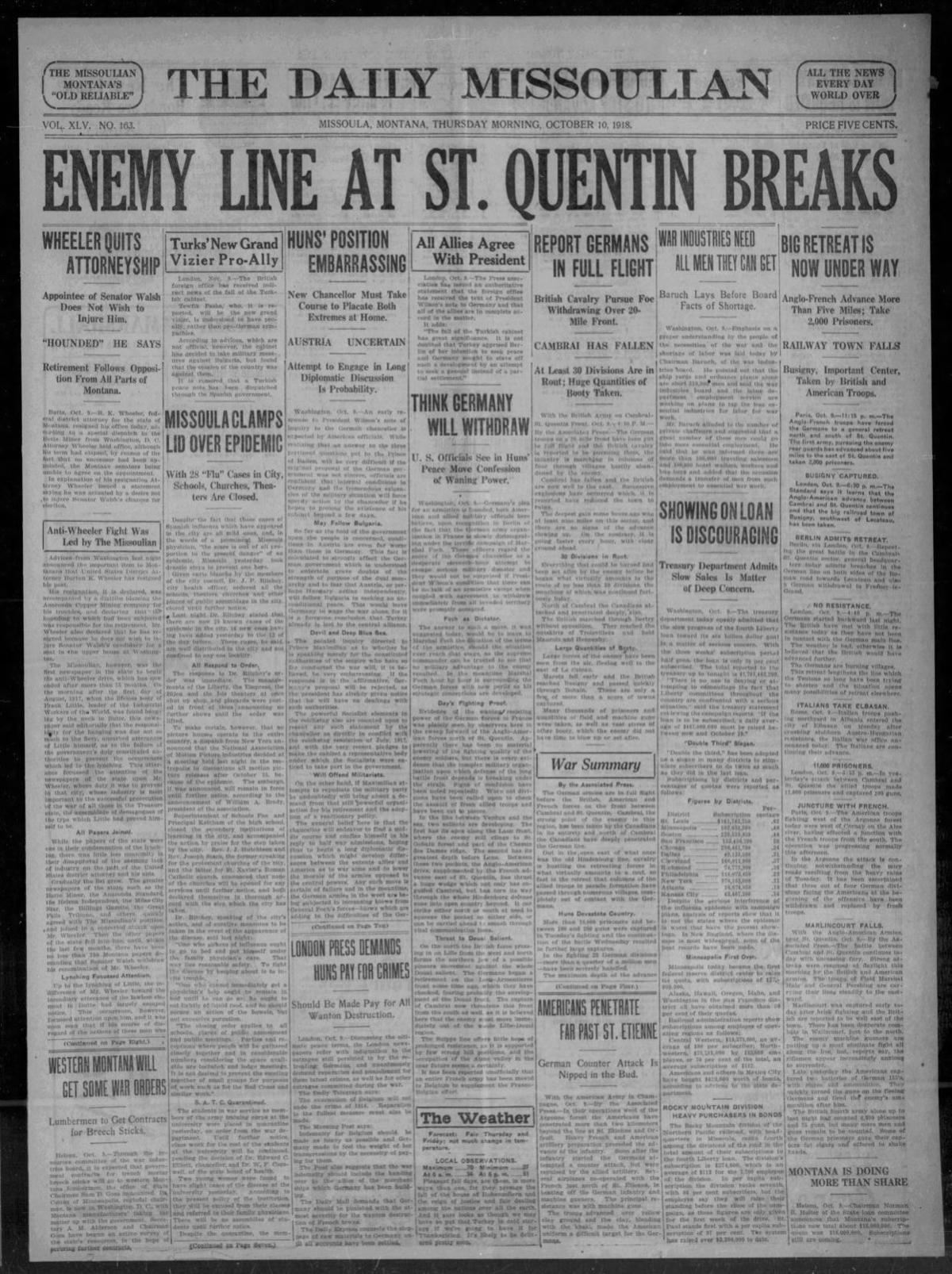 In exactly six weeks, the hell that came to be known as World War I would end with an Allied victory, but not the so-called Spanish influenza pandemic.

However, before that: October and its own month of hell. Over the next few days, Missoula Rewound will leap out of its normal Monday slot to take a look at through the pages of the Missoulian. Draw for yourself the comparisons and contrasts to a city, state, nation and world in the throes of a new kind of virus 102 years later.

Its Spread is Rapid, the subhead to that Oct. 1 story read.

Next day: “The state board of health is informed that there are 350 cases of influenza in Scobey, Sheridan county, and four deaths have resulted.”

“Health officials are of the opinion that only good luck coupled with hard work can prevent a wide-spread epidemic of this disease in Montana,” the front-page story on Oct. 3 said. “To work out some method of combating the disease, the executive committee of Montana volunteer medical corps will meet soon with the state board of (health).”

The Minneapolis-based northern division of the Red Cross sent a telegram to the state health board advising it was ready to organize groups of nurses in Montana and to prepare face masks to be worn “to prevent workers from catching the disease.”

More than 100,000 soldiers in the nation’s army camps had the deadly flu, and 7,645 had contracted pneumonia since the second and most devastating wave of sickness hit the United States on Sept 18. There’d been 2,148 deaths in the intervening two weeks.

WATCH OUT! begged a Missoulian editorial on Oct. 4.

“The most common way of spreading the influenza … is by sneezing and coughing and spitting in public places. If we would avoid an epidemic that is holding up home war work throughout the country, let us have a care how and where we sneeze and cough and spit and if we must do that in public, let us, at least, use a handkerchief.

“The better way would be to stand in an open space or to sneeze in a closed room at home but since that is not always possible, let us do the next best thing. Also we should keep a spray in the bathroom closet to use when we feel a cold coming on.

“Another method of spreading influenza is by kissing. A word to the wise with regard to that should be sufficient. Let us conserve kissing for a time, as a war sacrifice. Remember that we are trying to make the world safe for democracy, but we will not get very far if we are so negligent as to permit ourselves to be conquered by a few billion influenza germs.”

“We wonder,” he concluded, “whether Spain is trying to get even for that little muss up in 1898.”

The Saturday, Oct. 5, paper said a rumor of two cases in Missoula could not be confirmed. One was said to be that of a woman in Orchard Homes. The other was a slight case of a man who recently came to Missoula from the east.

"It seems to me,” the mayor said, “that the people of the city are reasonably careful in the matter. At least, they are more so than used to be the case. However, I support strict enforcement of the ordinance."

And then it was here for sure.

“Twenty-five enlisted men, in training at Fort Missoula, were placed in the hospital at the post last night and quarantined in the belief that the men may have Spanish influenza,” the Missoulian reported on Oct. 7, a Monday. “The men placed in the hospital were all examined upon their return from their usual Sunday off, which they had passed in the city. The cases are slight, and it may be that they develop into nothing more than grip, officers at the fort said last night.”

Later that Monday night, post commandant Capt. J.S. Maginnis notified the war department he had 25 cases of Spanish influenza on his hands. All were in the Fort Missoula hospital.

Maginnis said the cases were slight, and in ordinary times would be considered “little more than hard colds.”

“However, we have established a quarantine and no one may enter or leave here,” the captain said. “The quarantine is established both for the protection of the soldiers at the fort and for the townspeople in Missoula."

“A rigid quarantine has been established at the post, by which no one is permitted either to enter or leave the military reservation,” the paper said. There were 206 men stationed at the fort.

And so the first week of October ended. Week 2 would bring closures, frayed nerves and the first flu deaths to Missoula. More on that next time. ​

The Missoula City-County Health Department has extended and broadened its mandatory closures of businesses to prevent the spread of COVID-19.

The effects of the coronavirus could cost the Montana University System's campuses about $18 million total before the end of the school year, …

Some downplayed it, but the Spanish influenza pandemic began hitting Missoula hard in the second week of October 1918.

Families and pallbearers only: Even funerals restricted during 1918 flu crisis

The Spanish flu gained a tighter grip on Missoula in week three of October, 1918, with a rising death toll and other heartache.

By the end of October 1918, Missoula was still hunkered down to fight the ravages of a killing Spanish influenza plague.

All of Montana suffered in 1918-19 Spanish flu pandemic

Montana was one of the four states hit hardest by the Spanish influenza pandemic in 1918-19.

Missoula's public health chief is strategizing to limit a resurgence of the coronavirus after studying the Spanish flu epidemic in 1918.

Little romance in a Gypsy's travels

It's safe to say Missoula and Montana never did come to grips with one forgotten minority group. Whenever caravans of Gypsies appeared, we res…

Etta Covey of North Dakota, had been in Missoula only a few days when she succumbed at St. Patrick hospital on Oct. 20, 1918, to pneumonia after contracting the Spanish influenza. Covey left behind her husband, Harry, and two children aged 4 and 2. Her 17-year-old brother, Chester Fuller, was hospitalized at St. Pat's at the time with the same maladies. He died three days later. They're buried side by side at the Missoula Cemetery.