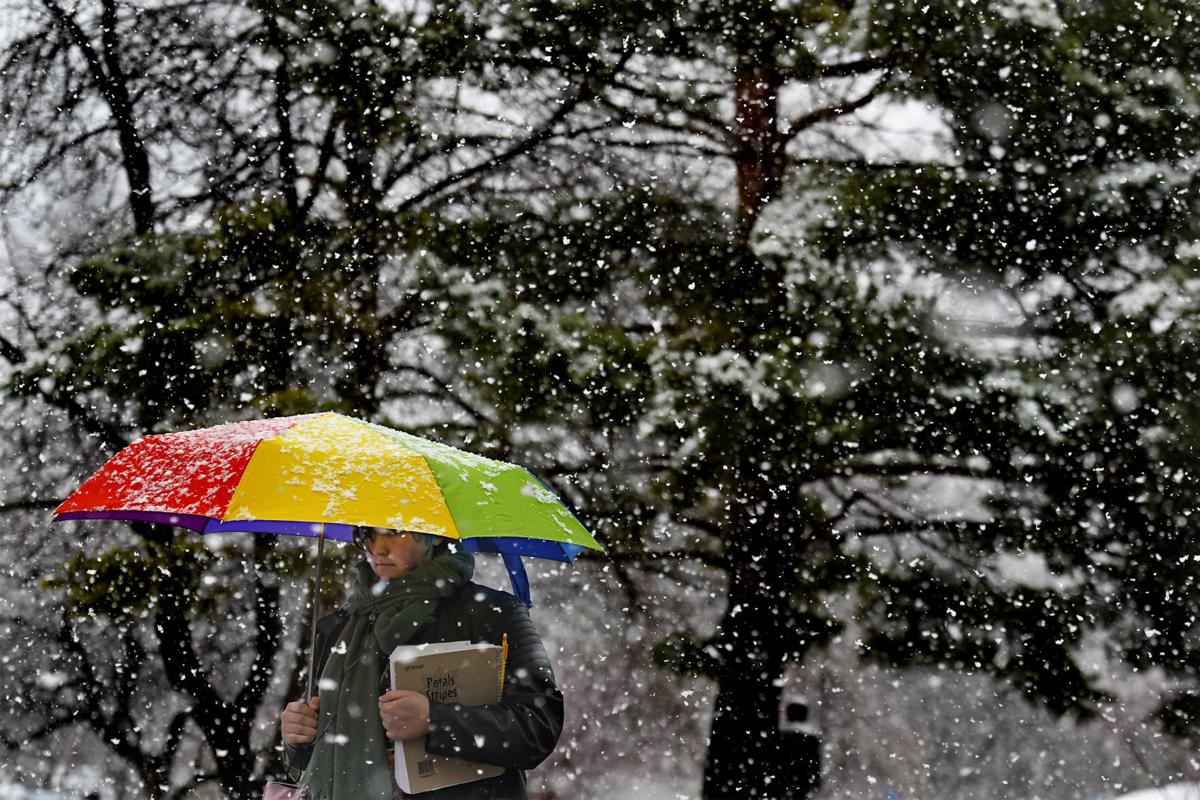 Annalise McCullough walks across the University of Montana campus amid heavy snow on Thursday afternoon. Rain is expected through Thursday in the Missoula Valley before sunshine and warmer temperatures are predicted for Friday and the weekend, according to the National Weather Service. 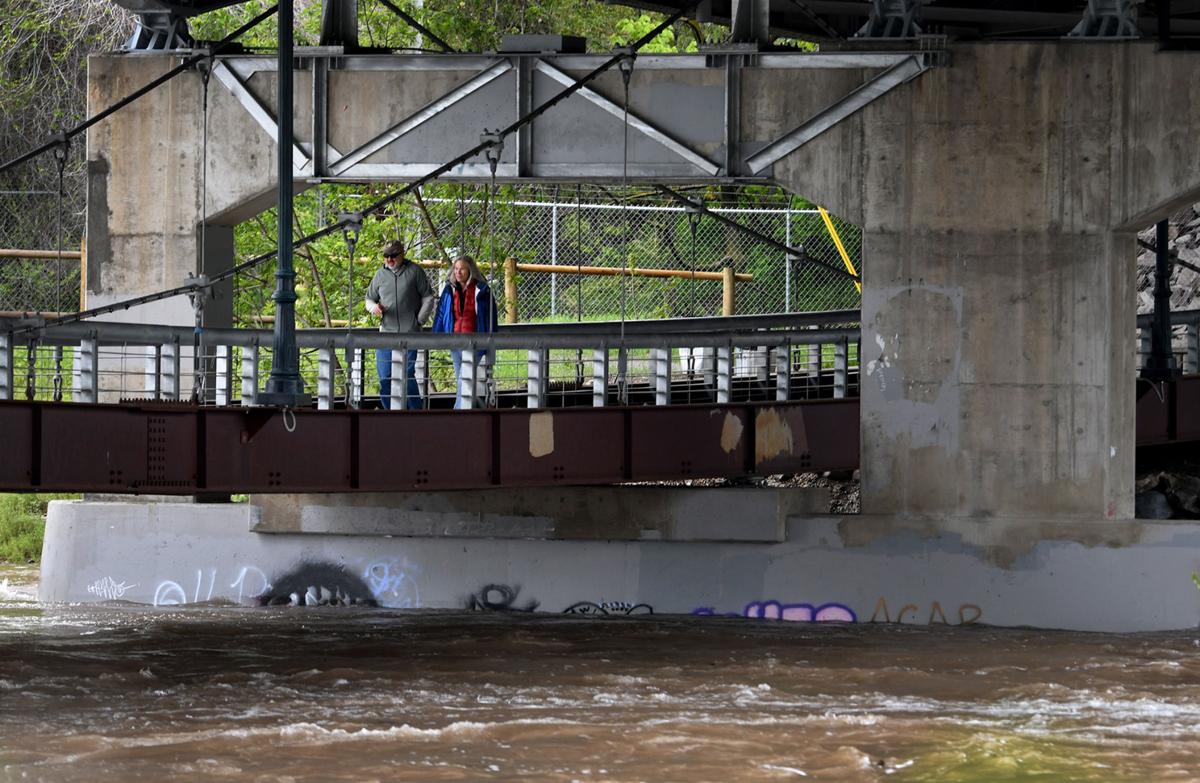 A pair of pedestrians crossed the Madison Street footbridge over the Clark Fork River last year.

Annalise McCullough walks across the University of Montana campus amid heavy snow on Thursday afternoon. Rain is expected through Thursday in the Missoula Valley before sunshine and warmer temperatures are predicted for Friday and the weekend, according to the National Weather Service.

A pair of pedestrians crossed the Madison Street footbridge over the Clark Fork River last year.

Missoula County officials are keeping a close eye on the rise of the Clark Fork River, and slick, muddy roads as they head into the spring flood season.

Adriane Beck, director of the county’s Office of Emergency Management, said the flood stage level is being lowered this year from 10 feet to 7.5 feet, based on the impacts from the 2018 flooding. Currently, the river sits at about 6.28 feet, and is expected to crest at 6.94 feet Wednesday before dropping on Thursday, according to the National Weather Service.

While the Clark Fork is brown with runoff, Beck and others are cautiously optimistic that the predicted cooler temperatures forecast by the National Weather Service will slow down the snowmelt process and keep flooding at a minimum.

“The snowpack and the potential for river flooding is about average, so there’s no red flags that we’ll receive the massive flooding like we had last year,” Beck said.

The higher river levels mainly are due to the significant 1.5 inches of precipitation — including Tuesday's snow — that dropped in the Missoula area during the past three days, according to Dan Zumpfe with the National Weather Service. He noted that the 1.05 inches received since 12:01 a.m. Wednesday was double the previous record of .44 inches set in 1943.

"A lot of the problems we're seeing in the last several days are due to the rainfall around the area," Zumpfe said. "We eclipsed the daily record for Missoula. For western Montana, the snowmelt is a secondary issue."

Still, Beck plans to ask the county commissioners for an emergency proclamation on Thursday that will enable her office and their partners in the community, including non-governmental organizations, to start preparations in case flooding occurs. Missoula County will have sandbags available again this year if needed.

“That will start greasing the wheels to get those people ready for whatever comes,” Beck said.

They’ve also set a meeting for 6 p.m. April 24 in the Hawthorne School gym to meet with Orchard Homes residents to help them prepare for the possibility of flooding this year. That area was hit particularly hard last year, when the Clark Fork River reached the major flood stage of 13 feet in May 2018.

The 2018 rapid snowmelt came about two weeks ahead of the normal flood season. About 65 homes were evacuated as the Clark Fork River shifted into new channels, taking out hundreds of trees and a couple of mobile homes, and tipping over power poles at the end of Tower Street. A levee in the Orchard Homes area sustained an estimated $1 million in damages, with the county responsible for about $194,000 in repair costs and the Army Corps of Engineers covering the rest.

The seven-day forecast calls for a mix of rain and snow Wednesday, turning to rain during the day and returning to the rain/snow mix at night. Thursday appears to be more of the same, before the sun pokes through the clouds Friday and Saturday, with highs in the 50s.

"Relative to the flood potential, it's a good thing when we start seeing snowflakes, because that means the snow levels are coming down and freezing levels are coming down. That caps the snowpack runoff, so the rate of melting slows and streams don't increase their flows," Zumpke said. "That has a way more stabilizing affect when you look at the risk of flooding. It definitely stops excessive melting."

The moisture definitely affects roads. Erik Dickson, the county’s assistant public works director, told commissioners Tuesday that he needed to close about a half-mile stretch of Deschamps Lane to through traffic between LaValle Creek Bridge and Mullan Road due to nearly impassible gumbo-like conditions in the low-lying portions of the gravel and clay road. The route is accessible to residents only. About 800 vehicles use Deschamps Lane each day.

“We did some work last week to try to bridge the problem areas, but it’s already a lost cause,” Dickson said. “It’s getting bad. It’s all under water and mud.”

He showed photographs of a pickup truck trying to make its way through the mud, adding that passenger cars run the risk of getting high centered, and heavy trucks might sink.

“We imposed restrictions a couple weeks ago, but I think we should officially close it to prevent further problems,” Dickson said.

He recommended that motorists west of Deschamps Lane should detour onto Pulp Mill Road, and anyone coming east should stay on Reserve Street or take Flynn Lane to West Broadway.

People who want to notify the county about water over roadways are encouraged to call Dickson's office at 406-258-4753 to report problems.

The Ravalli County Sheriff's Office notes that due to a landslide, West Fork Road is closed around Mile Marker 13 and power is out in the area. Crews are working on fixing the problems, and one lane should be open by 8 p.m. Tuesday.