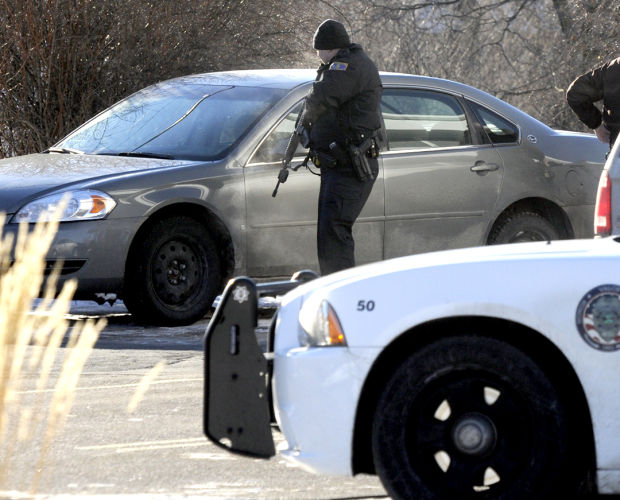 Missoula police officers stand outside the Taco Bell on East Broadway on Thursday morning after an armed robber held up both the restaurant and the Motel 6 across the street within about 20 minutes of each other. No one was hurt in the robberies and police have yet to find the suspect. 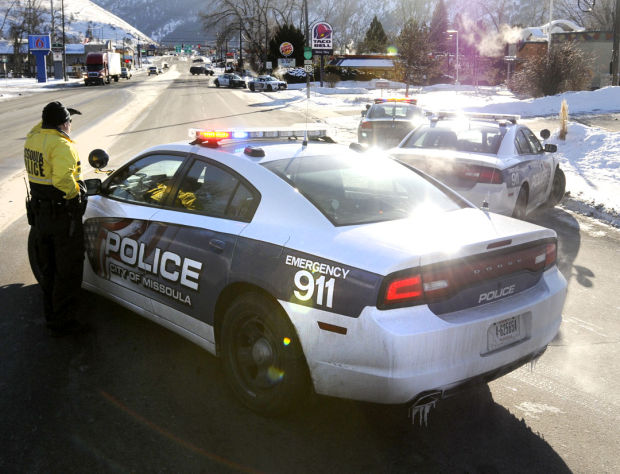 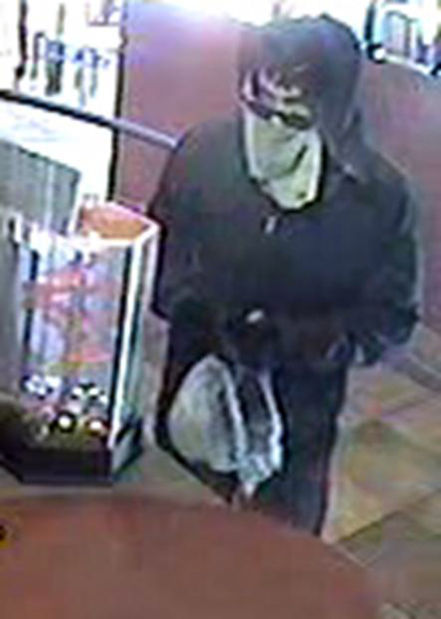 Surveillance video shows the suspect from armed robberies at Motel 6 and Taco Bell on Thursday morning. 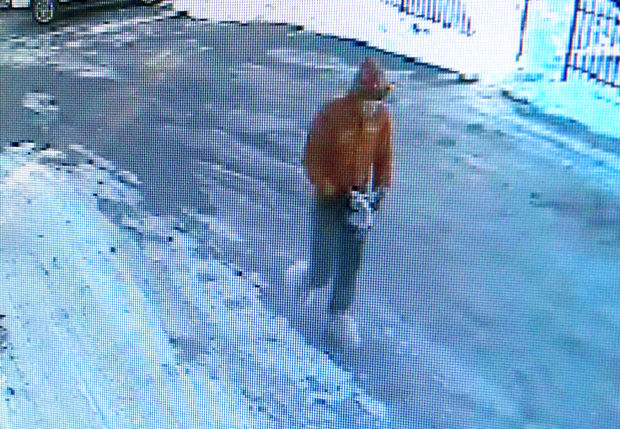 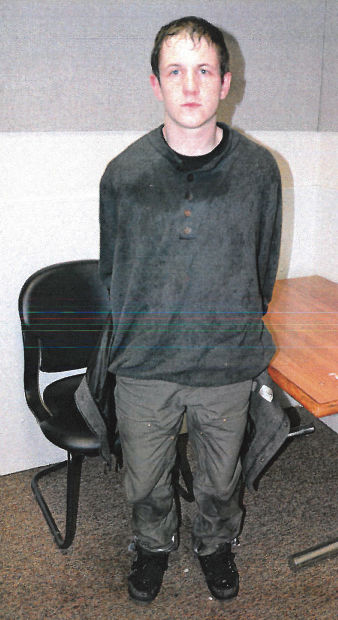 A man armed with a pistol robbed two East Broadway businesses early Thursday before slipping from sight, prompting schools across Missoula to lock their doors and the University of Montana to cancel classes and lock students, faculty and staff inside buildings for three hours.

With temperatures steady at minus 17 degrees, officers with the Missoula Police Department responded to reports of the first robbery at the Motel 6 at 9:20 a.m.

Travis Welsh, public information officer with MPD, said the suspect demanded cash while brandishing a black semi-automatic pistol. He fled on foot, prompting police to focus their initial search along the icy streets of downtown Missoula.

At the time of the robbery, the suspect was wearing a red Hellgate High School letterman jacket bearing the name “Jennifer.” The man, described as white and 5 feet 5 inches tall, fled wearing plastic bags over his shoes, dark sunglasses and a light-colored bandanna.

About 21 minutes later, with officers still searching the area, reports of a second robbery came in from Taco Bell, across Broadway from the motel. Officers converged on the restaurant with weapons drawn, missing the suspect by a matter of minutes.

Welsh said the suspect in the second robbery wore a blue hooded sweatshirt, blue jeans and dark shoes. He also brandished a black pistol, prompting schools across the city to lock their doors and shelter students as police launched a citywide manhunt.

“Though it has not been confirmed, it is believed that both robberies were carried out by the same suspect,” Welsh said. “A perimeter was established and officers conducted a ground search that consisted of going door to door in the immediate area.”

Descriptions of the suspect also matched that of escaped rapist Kevin Briggs, who fled custody in Gallatin County last Sunday and has ties to Missoula, further heightening tensions. UM and Missoula police had issued an alert late Wednesday, warning that Briggs could be in the area.

Briggs’ criminal record includes convictions for rape and kidnapping, and for two previous escapes from jail. He is 5 feet 5 inches tall, 150 pounds, with a medium build, brown hair and blue eyes.

The suspect had allegedly been sighted near campus.

“With a possible sighting being that close to campus, we thought it would be a good idea to initiate a lockdown proceeding rather than just a notification, given the proximity near campus and the severity of a man with a gun,” said interim UM Police Chief Marty Ludemann.

University students were asked to shelter in place. The lockdown went into effect about 9:45 a.m. and remained active for nearly three hours.

UM President Royce Engstrom said school administrators went to their assigned posts upon notification. Vice President of Administration and Finance Mike Reid moved to the Office of Public Safety, while other administrators assembled at Main Hall.

Engstrom said officials notified the campus through repeated text messages, emails and direct calls to fraternity and sorority houses. The emergency announcement was also posted on the university’s website, as well as its Facebook page.

“We activated our emergency response plan immediately,” Engstrom said. “Buildings were locked by our officers who went around campus.”

For a short time, police cordoned off streets between Hellgate High and the university campus.

“Administration has declared a lock-in procedure for the high school,” one text message from the district read. “Administrators are positioned at the doors and they will keep students in the building. We will keep you updated as we receive information.”

The district issued the lockdown to eight facilities at roughly 10 a.m., including both Hellgate and Sentinel high schools. Rattlesnake, Paxson, Lowell, and Lewis and Clark elementary schools were also affected, as well as Washington Middle School.

“We took precautions primarily because of the warnings we were receiving from MPD,” said Hatton Littman, MCPS spokeswoman. “When they say an armed suspect is fleeing in the vicinity of our schools, we take those procedures. Luckily, students were safe and their education was not interrupted.”

Area businesses also took precautions, with a few locking their doors and others advising employees to take heed. St. Patrick Hospital posted extra security at its doors, and alerted staff of the situation. Police officers visited local gas stations and searched for the suspect in bathrooms.

The suspect remains at large.

Missoula police: 'Nothing to suggest' robber is Bozeman escapee

The Missoula Police Department is continuing the investigation into Thursday’s back-to-back armed robberies, but have found “nothing to sugges…

Frenchtown schools mostly back to normal after bomb threat

Tweets from the UM lockdown

The University of Montana campus community shares their experiences from Thursday's lockdown.

Brett Montgomery was one of roughly 150 people locked down at the University Center while police look for a robbery suspect.

The astronomy class passed the time watching “MythBusters.” Librarians offered candy and board games. One class divided up a bag of M&Ms –…

Missoula police officers stand outside the Taco Bell on East Broadway on Thursday morning after an armed robber held up both the restaurant and the Motel 6 across the street within about 20 minutes of each other. No one was hurt in the robberies and police have yet to find the suspect.

Surveillance video shows the suspect from armed robberies at Motel 6 and Taco Bell on Thursday morning.