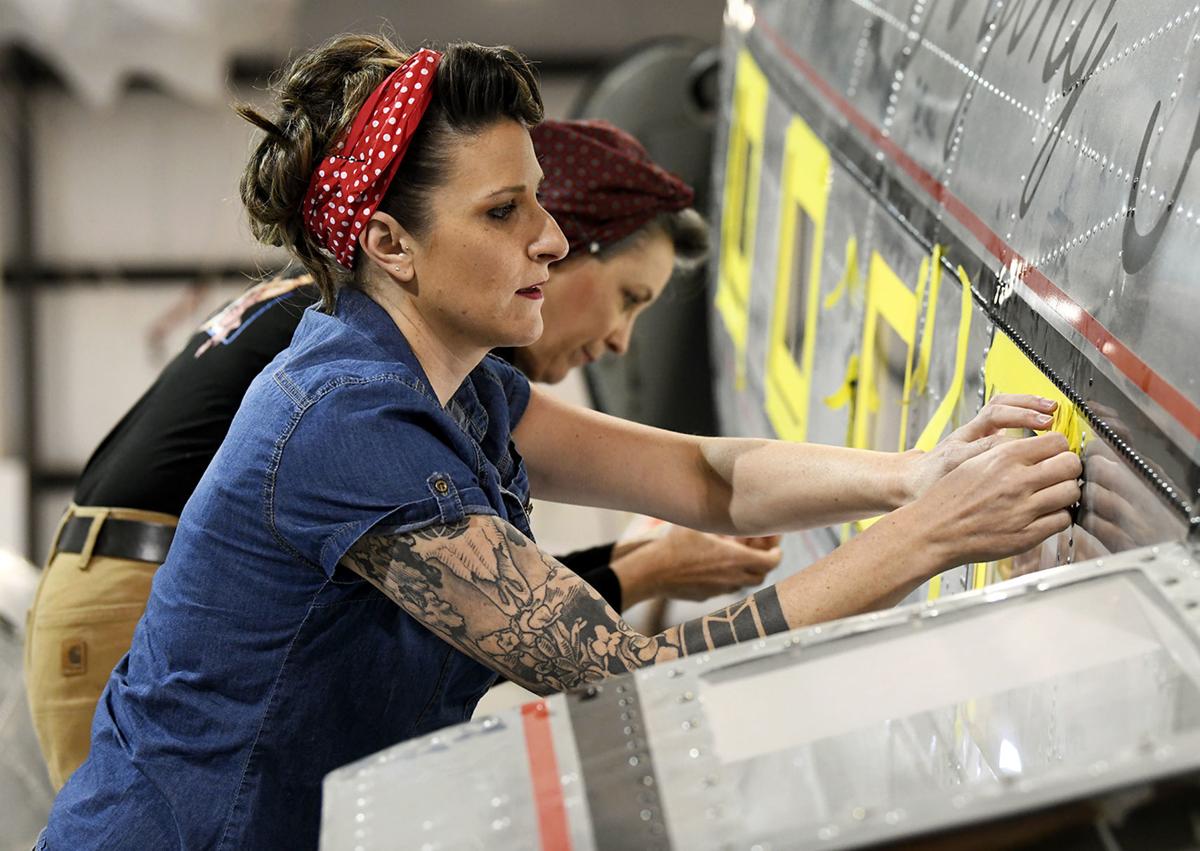 Erica Simmerman, front, and Dawn Douglass work on windows of Miss Montana, the Douglas C-47 being rebuilt at the Museum of Mountain Flying for this year's D-Day anniversary. Friday was Rosie the Riveter Day, and women who've been working on the plane dressed like the iconic images of women who helped build airplanes, ships and military supplies during World War II. 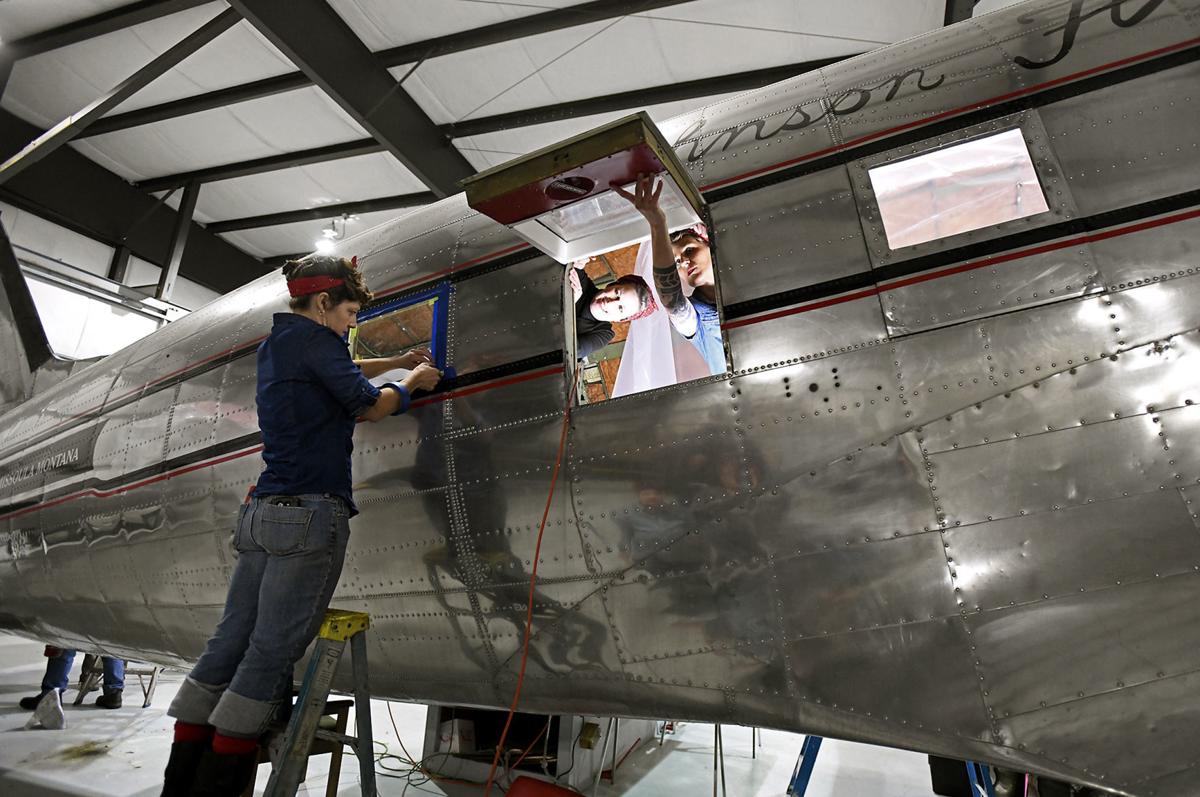 Leah Rediske, Dawn Douglass and Erica Simmerman, from left, work on the C-47. When the plane is restored, it will make stops across the country on the way to a 75th anniversary D-Day event in Normandy, France, in June. 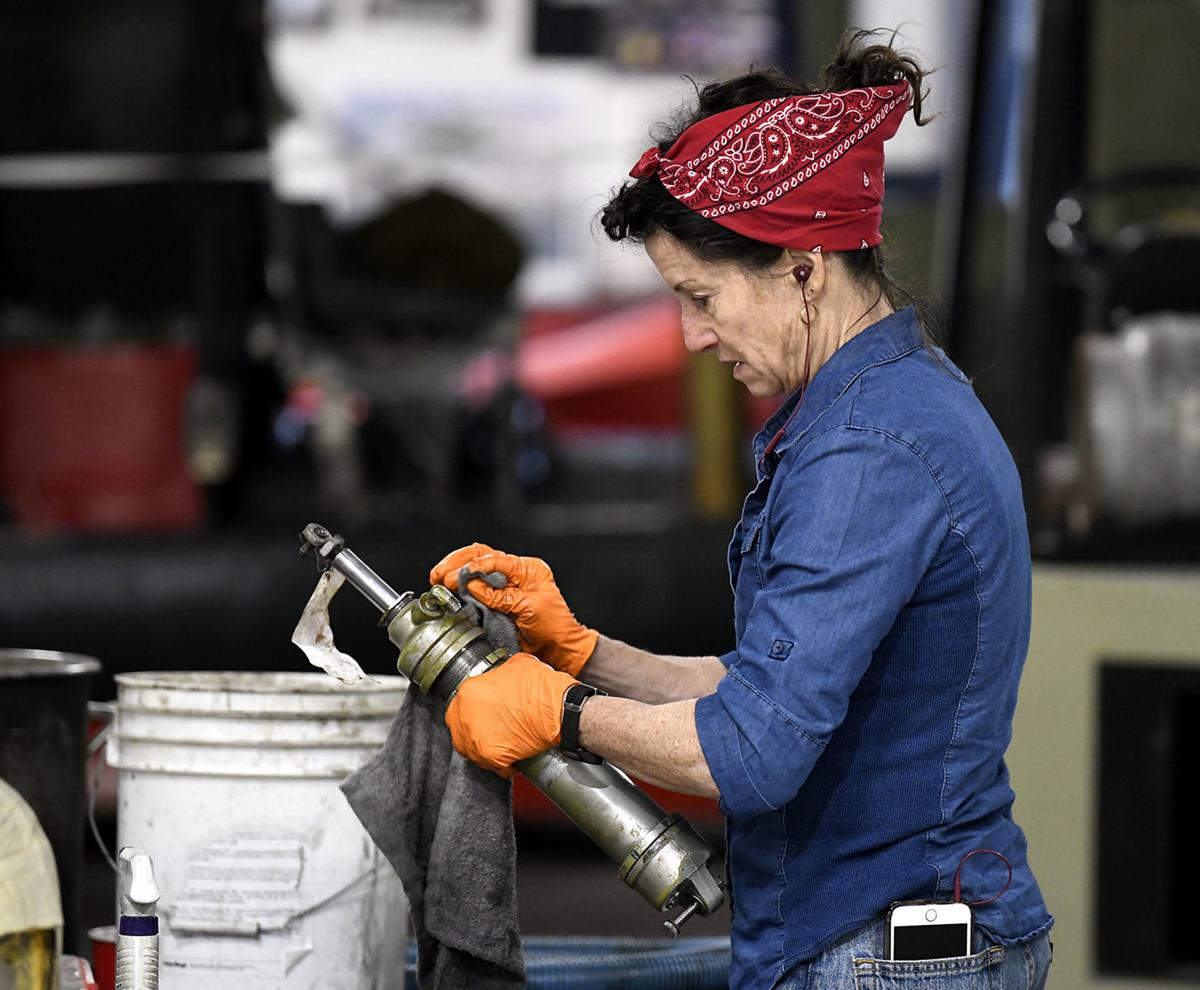 Kim Maynard cleans a landing gear strut on Friday at the Museum of Mountain Flying. Maynard, one of the first female smokejumpers, will be among those who parachute from the plane at the D-Day anniversary in June.

Erica Simmerman, front, and Dawn Douglass work on windows of Miss Montana, the Douglas C-47 being rebuilt at the Museum of Mountain Flying for this year's D-Day anniversary. Friday was Rosie the Riveter Day, and women who've been working on the plane dressed like the iconic images of women who helped build airplanes, ships and military supplies during World War II.

Leah Rediske, Dawn Douglass and Erica Simmerman, from left, work on the C-47. When the plane is restored, it will make stops across the country on the way to a 75th anniversary D-Day event in Normandy, France, in June.

Kim Maynard cleans a landing gear strut on Friday at the Museum of Mountain Flying. Maynard, one of the first female smokejumpers, will be among those who parachute from the plane at the D-Day anniversary in June.

Kim Maynard, in red kerchief and cuffed jeans ala the 1940s, stood at her work, cleaning a strut detached from the landing gear of the plane from which she’ll jump come June.

Maynard, of Missoula, was one of the nation’s first female smokejumpers in 1982. She and husband Al Charters, a former Green Beret high-altitude jump specialist — the “sky god,” she called him — were among the first to sign on to a crew that will take to the skies over Normandy, France, with vintage chutes for the 75th anniversary of D-Day in World War II.

Like dozens of other volunteers, they’ve been showing up for months to work on the iconic Douglas C-47 Miss Montana that’ll take them there.

“When this came to the museum it was the Mann Gulch plane. Now it’s getting a whole new life,” Maynard said, referring to the aircraft’s history in its Johnson Flying Service days. Fifteen smokejumpers were dispatched on a fire north of Helena in 1949. All but three died that tragic August day.

The mission in the museum hangar is to make Miss Montana airworthy to join the D-Day Squadron and Daks Over Normandy and fly on to a commemoration of the Berlin Airlift. Then she'll return to spend her next life traveling across the country, representing Montana and those who died in the service of the United States.

Friday was Rosie the Riveter Day, and Maynard and 20 or so other women and girls wore the familiar garb of the female work force that built such planes in bulk during the war.

Randy Schonemann of Neptune Aviation is the crew chief of Miss Montana. He said only a small percentage of workers at the Douglas Aircraft plant in Long Beach, California, were females when the war began. By 1944, they made up more than half the work force.

Miss Montana rolled off the assembly line there in May, a month before D-Day. There’s a good chance, Schonemann said, that her rivets were installed by women just like Maynard and the others at the museum Friday.

“It’s just very exciting to be able to take part in such a crazy idea. I love it,” said Crystal Schonemann, Randy’s wife and second mechanic.

The two of them have headed up the disassembly and reassembly of Miss Montana that began last June and will be flying each leg of the journey to Europe for the D-Day celebration.

“We are making leaps and bounds now,” Crystal Schonemann said. “It took some time to get the maintenance schedule and all that stuff rolling, but now that we got that it’s all coming together. The last three weeks we’ve really made a lot of progress.”

The rebuilt engines are due to come in next week from Idaho, where they were shipped last summer.

“That’s the biggest part,” Schonemann said. “Once we get those in we’re good.”

Friday’s to-do list included installing and sealing the five windows on either side of the plane and fitting the interior for new insulation.

Cindy Fulks, who drove in from Hamilton to volunteer for the day, helped Karen Taberna of Gull Ski with a giant sheet of plastic to create a pattern for the leather imitation aircraft fabric. Taberna will take it back to the shop to cut what will be a “diamond tuck and roll” of a gray fabric, she said. It’ll snap on the sides from the top to the bottoms of the windows.

Teri Sharp and Erica and Caelin Simmerman, all of Florence, formed a mother-daughter-granddaughter team to work on the windows.

Caelin is 11 years old. Her brother Brennan is 15 and “loves planes and guns,” she said.

Brennan has been a frequent volunteer on Miss Montana.

“He’s been up to his elbows in grease,” Sharp said. “What I like is, when he took me around the museum, he has kind of developed an ownership. He’s amazing, so he’s kind of got me excited about it.”

Until Friday, though, sister Caelin hadn’t been able to make it to the hangar.

“When she found out they were doing Rosie the Riveter she got excited,” Erica Simmerman said. “Plus I let her skip school.”

“A lot of people are so passionate about this,” said Crystal Schonemann. “Once you touch it, it kind of gets into your blood.”

“I laid awake all night the other night thinking about it. And I’m not even in charge,” said Leah Rediske of Florence.

Rediske, a captain for the Florence Volunteer Fire Department, said her husband Joe has been more involved with Miss Montana than she has.

“He spent a whole week under the stabilizer, scraping all the crud off trying to get down to bare metal,” she said.

“I don’t know. I’m just here helping," said Rediske. "I’m not going on the trip at all. It’s just the idea that this thing is going to be in the air.

“I’ve been a wildland firefighter for about 15 years, so I’m very passionate about that side of it, having that connection with the jumper plane to Mann Gulch.”

Then there are the military connections. Her grandfather, Warren Jones, was a chief master sergeant at Fairchild Air Force Base in Spokane.

“I kind of feel like this is a homage to him,” Rediske said.

Her husband’s father was an airplane mechanic for the Montana National Guard.

“Same thing,” she said. “He wants to do it for his grandpa. It’s just that little... whatever it is. I mean, it’s not even the same airplane, but the idea is there.”

Eric Komberec, the project chairman, said the miracles keep rolling in. Already some $350,000 in cash and in-kind donations have been raised to make Miss Montana airworthy and get her to France.

On Wednesday, jump seats arrived from Texas for Maynard and 17 other paratroopers to sit in while crossing the English Channel to Normandy. They came at a bargain from a company in Texas, but organizers had to raise $15,000 in two days to get them.

“This project is getting so big now, there’s airplanes all across the country that are seeing how exciting this is, so there’s a lot of competition,” Komberec said.

So far, 15 of the 18 seats are “bought” for $790 apiece. Each seat will bear the name of a family member on a bronze plaque of remembrance, and a book with their stories will travel with the plane.

“I’m so excited to see this thing roll out these doors,” Crystal Schonemann said. “It’s been so long looking at it under these lights, I can’t wait to see it in the sun again.”

They say on one April day in 1944, at the peak of the American war effort, 16 B-17 bombers were assembled at Boeing plants in Seattle.