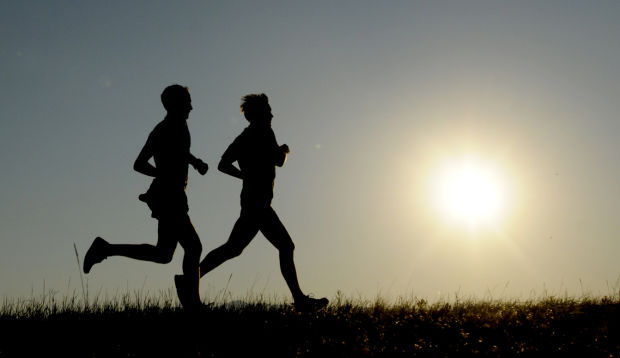 The sun just gets above the horizon as runners make their way down Mullan Road. 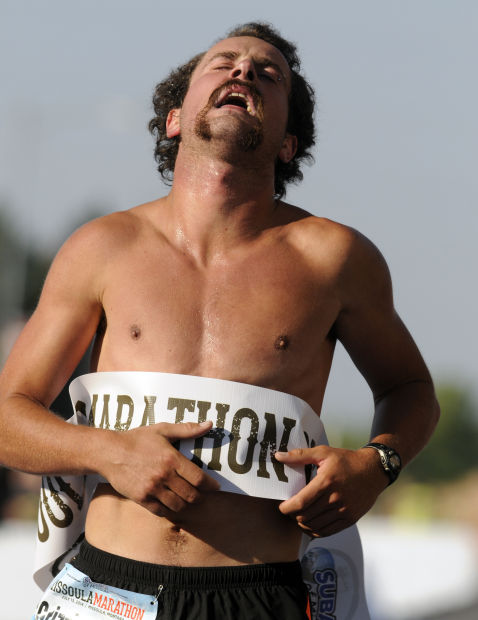 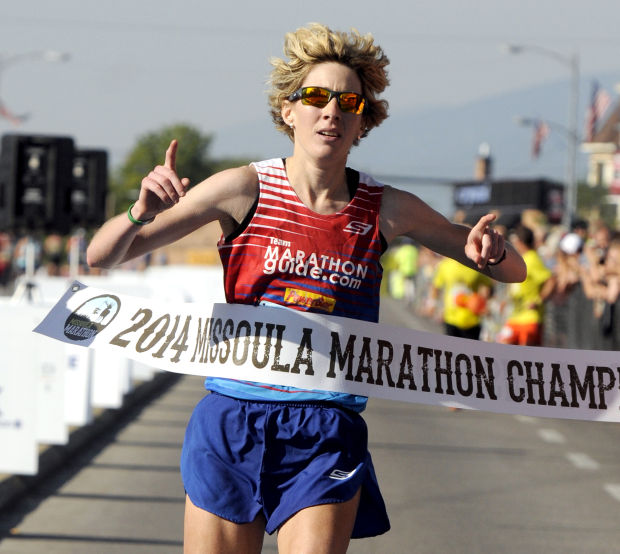 Camille Herron wins the female division in the full marathon.

By DILLON KATO of the Missoulian

In the predawn darkness before the eighth annual Missoula Marathon began at the starting line in Frenchtown, Andrew Crompton of Missoula said he had such a good time running the half marathon last year, he decided to sign up and try the full this time.

“It’s something I never thought I would do. I was always the short, fat kid growing up,” he said.

While he did most of his training alone this year, Crompton said there was a different feeling once it was race day, being in the group with all of the other runners and having people on the course sidelines cheering them on. Crompton said he wanted to beat three and a half hours, but would still be proud of his performance if he finished within 3:45.

“Actually, I’ll just be happy if I finish,” he said.

Kevin Mackaman sat in the bed of his truck, stretching and preparing.

Mackaman, from Stevensville, was running his fourth marathon, and his third Missoula Marathon, on Sunday. He also competed in the Boston Marathon this year.

As he zipped up a light jacket, Mackaman said he was hoping to hit his goal of finishing in three hours and 15 minutes. All of the runners wore timing chips on their shoes that recorded their start and finish.

“I feel as good as I’m going to get,” said Mackaman, one of the more than 5,800 runners who took part in either the half of full Missoula Marathon races this year.

As the minutes before the start of the race slipped away, the energy level of the crowd of marathoners ramped up. Runners double-checked their water bottles on their belts and retied their shoes, waiting to be told it was time to line up.

“I’m just ready to start,” said Amy Lund from Spokane, in town for her first Missoula Marathon, the third marathon she’s participated in.

At 6 a.m., it was time to run, and with a blast from the Grizzly ROTC cannon, they were off.

“We’ll see you at the finish,” the announcer said as the front group of elite runners took off, leading the rest of the pack on the first steps of their 26.2-mile journey.

At the 9.4 mile marker where the course turned off of Mullan Road and onto Kona Ranch Road, cars lined the street for blocks around with people who came out to cheer on the marathoners.

“It’s just really inspiring,” said Marilyn Lemaich, one of the race volunteers manning the aid station that handed out cups of water as the runners blew by. She said this was her fourth year as a volunteer, always at the same part of the course. Around 50 minutes into the race, marathoner Matthew Adams became the stand’s first customer.

Even at this point, Lemaich said, some runners are already starting to struggle, while others still look like they are just getting started.

“I think it’s helpful to have lots of people out here cheering,” she said, ringing a cowbell as a group of runners went by.

Lonnie Shafer stood on the other side of the road, waving an Indianapolis Colts flag over his head. Shafer and his wife Barbara are from Carmel, Indiana, and came up for her to run in her 30th marathon.

“She’s now run in 26 different states. Her goal is to finish a marathon in every state,” he said.

At the corner of 7th and Hiberta streets, just over 19 miles into the marathon and more than six miles into the half, some of the slower runners in the shorter race were in good spirits as they made their way to the next aid station. Several had stopped running in favor of jogging or walking, but still gave a thumbs-up and said thank you to the people who stood on the side of the street cheering them on.

Captain Mike Bowman with the Missoula Rural Fire District had a crew and engine out on the course at the corner.

“As the weather heats up, we’re going to pump a mist out to help keep them cool,” he said.

Once again, Adams was the first full marathoner to reach that part of the course. Three of his friends, Michael Fisher, Ashley Curry and Graydon Curry, had followed Adams to a few parts of the course, and were already looking forward to heading downtown to hopefully see him win.

At the finish line at the end of the Higgins Avenue bridge downtown, while the crowd waited for the first full marathoner to cross the line, hundreds of people who had already completed the half took photos with their families and grabbed bottles of cold water.

Joy Talcott from Santa Clarita, Calif., said she comes up to Missoula every year in the summer to see family, and this time decided to run in her second half marathon, and the first time in the Missoula Marathon. Talcott stood on the median in the street just past the finish line, staring back at the lane the half marathoners came up to the line in.

“I’m waiting here for my sister-in-law; we decided to enter this race together,” she said.

“The buses went great, the aid stations were great, and just look at this crowd,” he said.

The half marathon hit capacity with 4,200 participants and the full marathon had around 1,600 runners.

Adams, who led through the majority of the race, was not only the winner of the men’s full marathon, but a record-breaking winner. This was the first time he had competed in the Missoula Marathon, and his time of 2:20:27:91 not only broke the course record, but the state record as well.

“Marathons aren’t easy. So I feel like I just ran a marathon,” Adams said after crossing the line and having a race volunteer hang the medal around his neck. The race bib of the Seward, Alaska runner read “Grizzly Adams.“

Adams said he had started with the intention of trying to stay up front with the more elite runners and finish within 2:30, and after running a few good miles at the front, decided to try to keep the pace up.

“There were people sitting out in lawn chairs cheering, pointing their sprinklers into the streets for us,” he said.

Course records were also set in both the men’s and women’s half marathons, with Carlos Trujillo of Middleton, Idaho and Heather Lieberg of Helena crossing the finish line with the quickest times.

Camille Herron of Warr Acres, Oklahoma, won first place in the women’s division of the full marathon, with a time of 2:58:45, leaving Trisha Drobeck of Missoula’s record time of 2:49:32 from 2012 still standing

On the sidewalk near the finish line, Jodie McCrea of Lolo waited and watched for her husband Dennis to finish the full marathon. She had dropped him off at the University of Montana that morning to catch the shuttle buses that took runners to the starting line.

“He used to compete in marathons when he was younger. He listened to people talk about how great this was and wondered if he could get back into it. And it’s his birthday today – he’s 62,” she said.

Good Monday morning, western Montana! Are you ready for the work week? How about a change in the weather?

2014 Missoula Marathon and Half Marathon: Women's half marathon results

2014 Missoula Marathon and Half Marathon: Men's half marathon results

With shaggy hair, a handlebar goatee and a fiery pace, Matthew "Grizzly" Adams certainly fit the moniker on his race bib.

Businesses in Missoula get more than a “runner’s high” from the Missoula Marathon every year, as the total direct expenditures made by out-of-…

It’s Missoula Marathon time, and while they might not be ready for a full 26.2 miles all at once, hundreds of kids came downtown ready to run …

The Missoula Marathon embodies all the reasons why so many good folks choose to make this place home: outdoor recreation, an active lifestyle,…

The sun just gets above the horizon as runners make their way down Mullan Road.

Camille Herron wins the female division in the full marathon.