The Seeley Lake Ranger District plans to move forward with a second salvage sale for trees on lands burned during the 2017 Liberty fire.

Existing roads will be used to access the timber, with the work taking place in winter when the ground is frozen. District Ranger Quinn Carver said he expects the work will begin in December and wrap up within a year.

“We still have to advertise it and bid it, and that will take a couple weeks,” Carver said. “And we have to get it done before the ground thaws.” 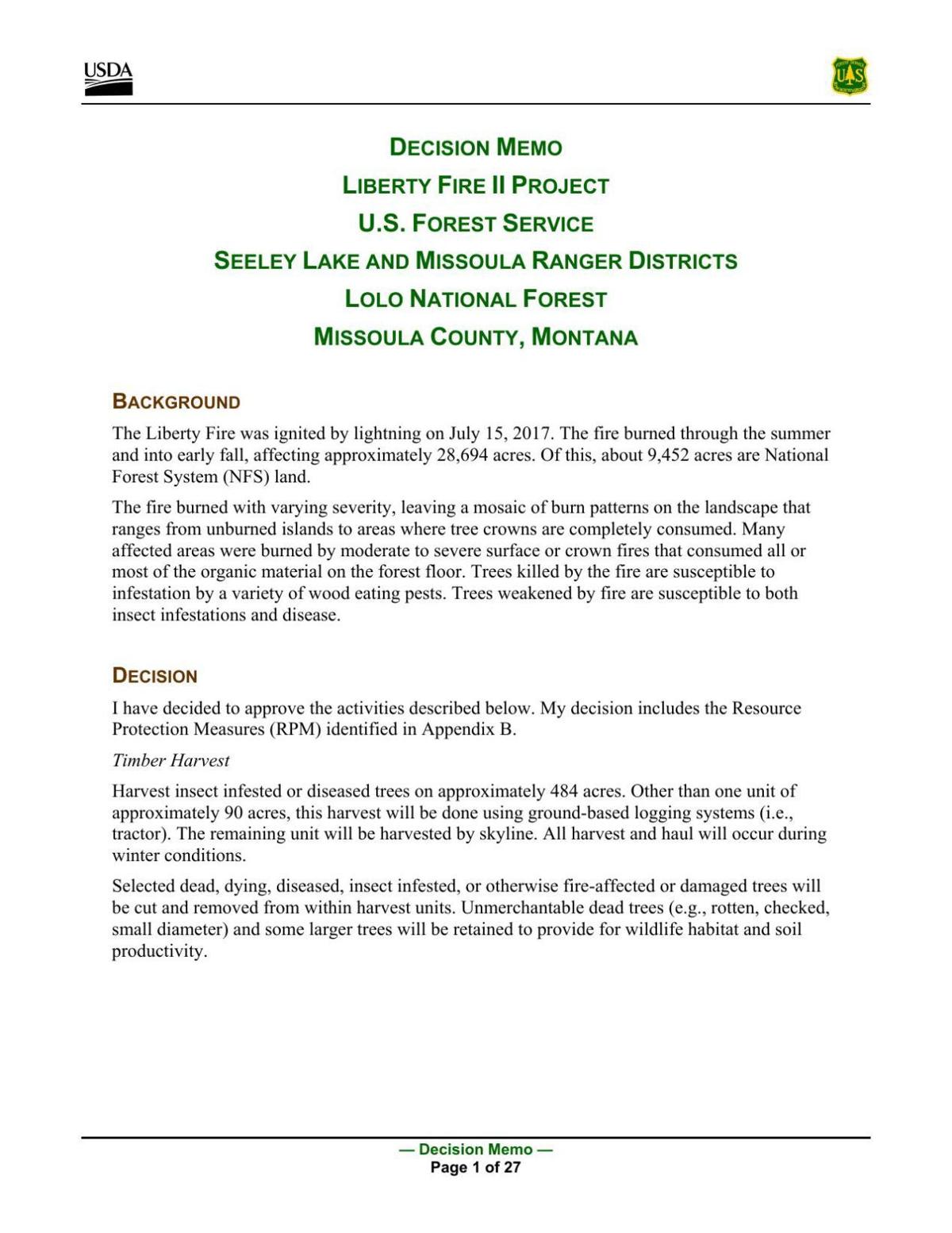 The Liberty fire was ignited by lightning on July 15 and burned across 28,686 acres, including 9,440 that are part of the Lolo National Forest.

“This decision reflects an important step forward on the Seeley Lake Ranger District as we continue to address and respond to the impacts of the 2017 fire season,” Carver said. “This project has helped to refine and define how we collaborate on projects with our stakeholders.

"I am looking forward to continuing to improve engagement and communication with the community and partners on other projects in the future.”

The project got off to a rocky start after it was presented for public scoping but with only a one-week comment period. Carver also was criticized for initially saying it was collaboratively developed with the Southwest Crown Collaborative and the Blackfoot Challenge.

He apologized immediately for misstating the collaboration on the project, and also extended the comment period for another week.

“That had to do with new people, including me, learning how to communicate. That was my fault,” Carver said on Friday. “We kicked it out for additional scoping, and I really appreciate all the conversations we had with the collaborators. We made some changes based on their comments.”

In particular were concerns with threatened or endangered species including grizzly bear, lynx and bull trout, according to Mike Garrity, executive director of the Alliance for the Wild Rockies.

Carver said they modified the project by moving the work to the winter to try to address those types of concerns. Grizzlies should be in their dens at that time, and the frozen soils will have fewer sediments running into the streams.

Garrity’s not convinced that will make that much of a change.

“It still makes the situation worse for bull trout in the spring when it thaws. You still have sediments that run off,” Garrity said. “And bull trout are sensitive to warm waters, and when you log all that you remove all the shade.”

“New growth comes in pretty quickly after a fire; it’s perfect habitat for lynx,” he said.

Another concern was that the proposed harvest in five of the fire-affected areas would create openings in excess of 40 acres. Forest Service policy typically limits the size of harvest openings to 40 acres or less.

But Carver notes in the comment section of his decision that the project will harvest less than 2% of the area affected by the fire, leaving large trees and woody materials on the ground “for nutrient cycling and forest floor development."

He adds that open areas larger than 40 acres are allowed under Forest Service rules in response to a large wildfire.

“The proposed action includes provisions to retain some large standing trees for habitat,” he wrote in the decision, which also authorizes improvements to existing roads and supports planting activities authorized in the first Liberty fire salvage sale.

He added that one of the goals outlined in the Lolo Forest Plan is to provide a sustained yield of timber to help support the economic structure of the local communities.

“Harvesting infested, diseased and susceptible trees would provide jobs associated with logging and milling and contribute to the supply of timber from (National Forest Service) land, which makes up about 60 percent of the forest land in Montana,” Carver wrote in the decision notice.

The Decision Memo, along with the scoping letter comments and responses, is available online the Lolo National Forest website at fs.usda.gov/project/?project=56887.

After the burn: Landscapes regenerate with a little help

SEELEY LAKE — We pause in the truck as the red fox crosses snow-covered Dunham Creek Road in front of us. It turns to stare boldly as we rumbl…