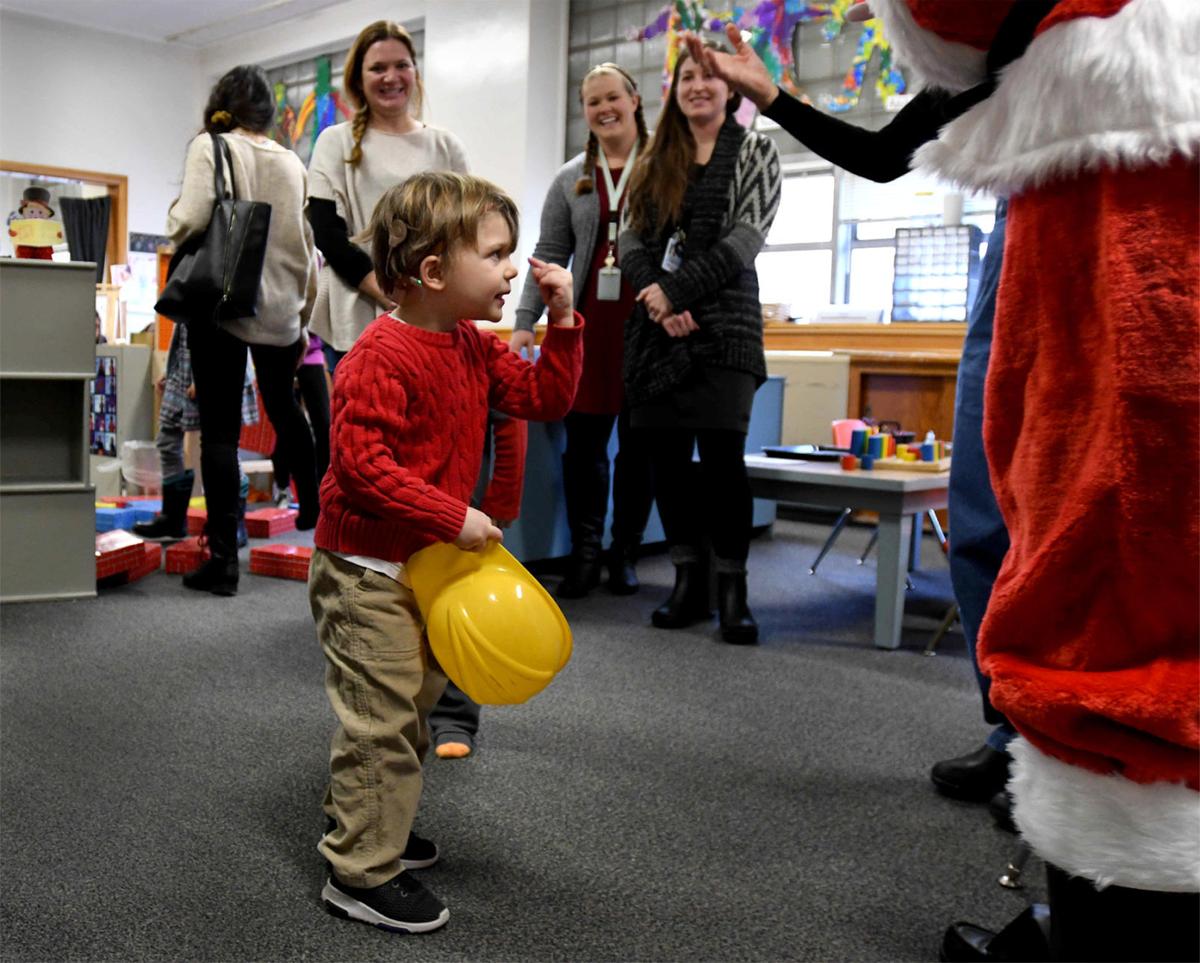 Levi Brandborg, a deaf preschooler, signs to Santa Friday morning that he would like to see his reindeer. The Santa, who was also deaf, made a visit to the Holiday party for the MCPS preschool class at Jefferson School for deaf and hard-of-hearing kids. 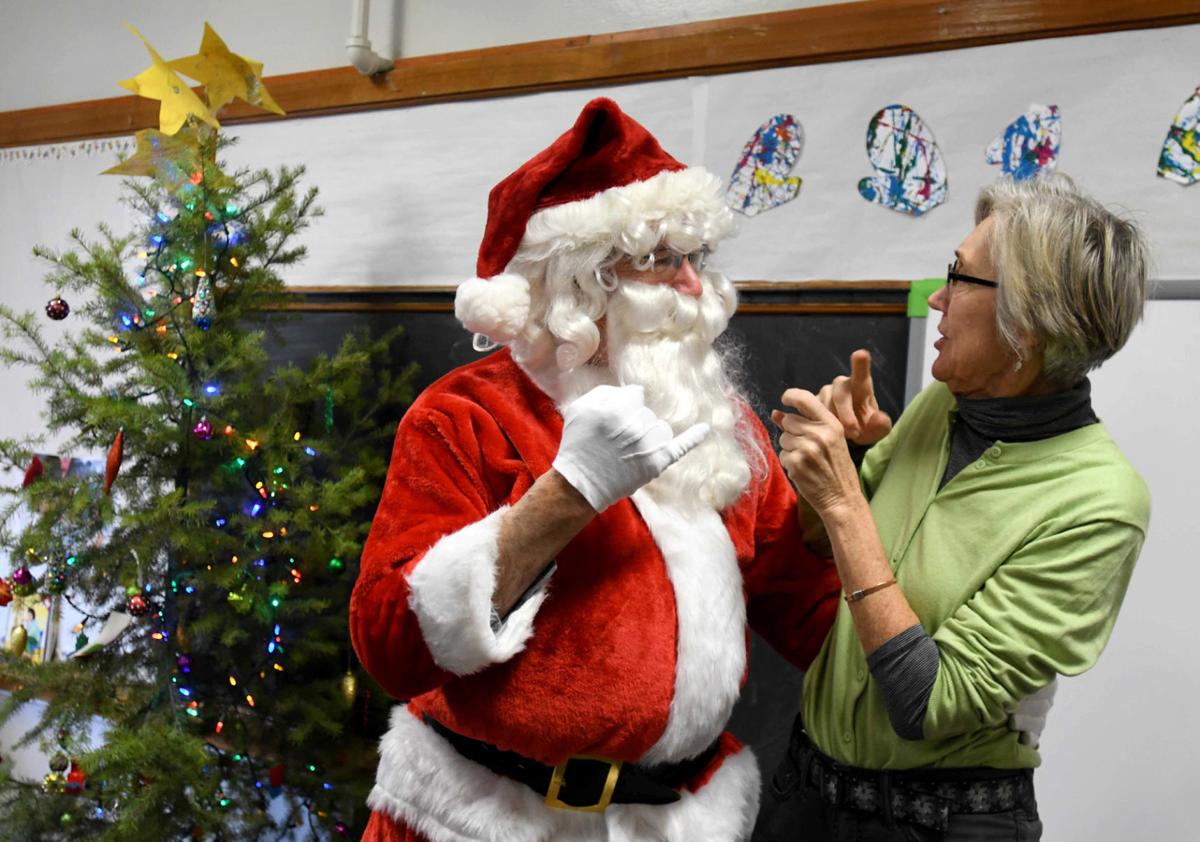 Mary Morrison, a retired advocate and teacher for deaf people, signs a conversation with Santa during the party. 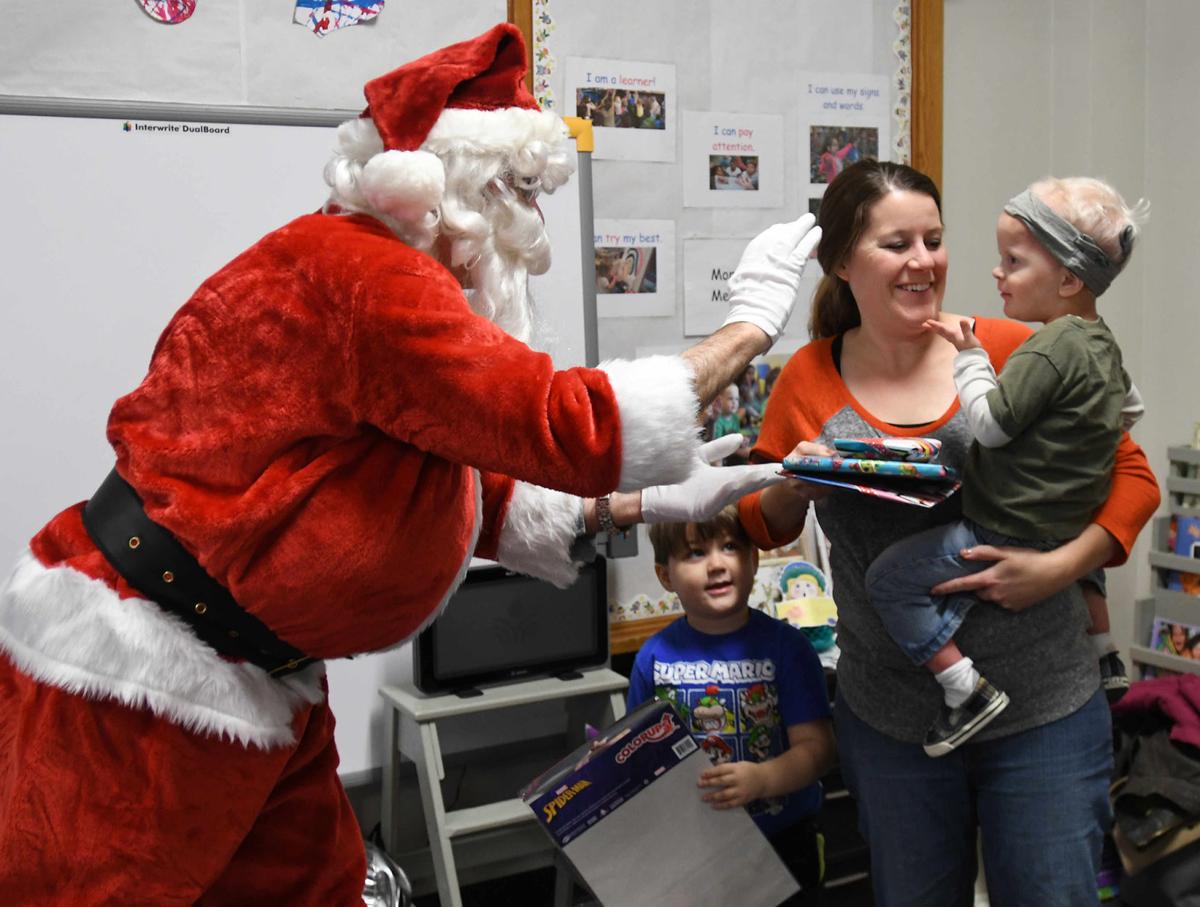 Santa signs with Gavin Cochran Friday while he's held by his mother, Moriah. Watching is Paxton Jiron, a hearing student but who lives with deaf parents.

Santa travels around the world to deliver toys to girls and boys, so it should come as no surprise that he’s fluent in every language, including American Sign Language.

Santa paid a special visit to Jefferson Elementary School’s preschool class for deaf and hard-of-hearing students on Friday to make sure that each child had a chance to share their Christmas wishes with the man in the big red suit.

Sarah White, a teacher for the new preschool class of nine, said it’s the first time in almost 20 years that the Missoula County Public Schools district has had enough kids to make a preschool class for deaf and hearing impaired students.

Parents and adults that attended Jefferson as kids came back for the holiday party to greet the same Santa they met years before and reminisce with the teachers and interpreters with whom they worked.

“I’m very involved in the community,” Flynt Bradborg said through an interpreter. Bradborg is a former student who now has a four-year-old son named Levi in the preschool class.

Bradborg attended the holiday party with his wife, Rita, and their 15-month-old daughter, Josie. Both of their children are deaf and ASL is their primary language. “It’s good to see my son interact with other kids,” he said.

Bradborg has known many of the other parents in the classroom since they were kids in the preschool class together. “Now I get to watch their kids grow up with my kids,” he said.

Anna Haslund was one of Bradborg's preschool classmates. Haslund thumbed through a photo album near the front of the classroom with photos of them as students. Bradborg sat on the lap of the very same Santa in one of the photos.

Santa greeted the former and current students when he walked in the room by signing “Merry Christmas.”

Interpreters, teachers and parents went around the room signing “Santa’s here” by holding one in a claw shape and extending it from their chin to stomach to represent Santa’s bushy beard.

The preschoolers attempted to form a circle on their classroom floor but many were too excited to sit still.

Santa sat in a chair and handed out wrapped gifts from underneath the tree, signing each student’s name when it was their turn.

Levi was the first to unwrap his gifts, which included a book, knitted hat and rubber dinosaur.

Some of the preschoolers' siblings also got gifts.

“We have deaf parents who have hearing kids but use sign in their homes, so we have them here as peers,” said Kate Byrne, an interpreter for preschool and high school students at MCPS. “Those kids come to school and need support in their first language, too.”

Ron Level said he was happy to be back as Santa's helper. “Last year we started discussing, thinking about doing this again,” Level said through an interpreter. “It’s so important that Santa could communicate with them and sign with them.”

Santa made one last appearance after he handed the children their gifts and waved goodbye. He signed from outside the classroom window that he accidentally locked himself out and he needed a key.

First-graders sounded out the word “stop” as their teacher Cassie Murphy pointed to letters on the board at Chief Charlo Elementary on Friday.

Once again, a mural that has lined the walls of the old Whittier School building on Missoula’s Northside for more than four decades is slated …

November is a month bent on consuming — from eating excessive amounts of turkey and stuffing to stocking up on Black Friday and Cyber Monday deals.

GREAT FALLS — A 32-year-old Great Falls man has been sentenced to nine months in prison, two years of supervised release and ordered to pay $1…

The Stevensville Fire Department was dispatched to the Stevi Cafe in the 200 block of Main Street in downtown Stevensville at around 9:30 p.m.…

The Missoula Fire Department responded to a house fire on the corner of Burton Street and Howell Street shortly before 2 p.m. on Sunday.

Monday Montanan: Thompson juggles the beauty and stress of Poverello

It’s 11 a.m. in the Poverello Center and Amy Allison Thompson recalls how her mother used to describe the career of nursing: “It’s like being …

If you’re a procrastinator and still looking for a plantation-grown Christmas tree in Missoula, you might be out of luck.

Levi Brandborg, a deaf preschooler, signs to Santa Friday morning that he would like to see his reindeer. The Santa, who was also deaf, made a visit to the Holiday party for the MCPS preschool class at Jefferson School for deaf and hard-of-hearing kids.

Mary Morrison, a retired advocate and teacher for deaf people, signs a conversation with Santa during the party.

Santa signs with Gavin Cochran Friday while he's held by his mother, Moriah. Watching is Paxton Jiron, a hearing student but who lives with deaf parents.