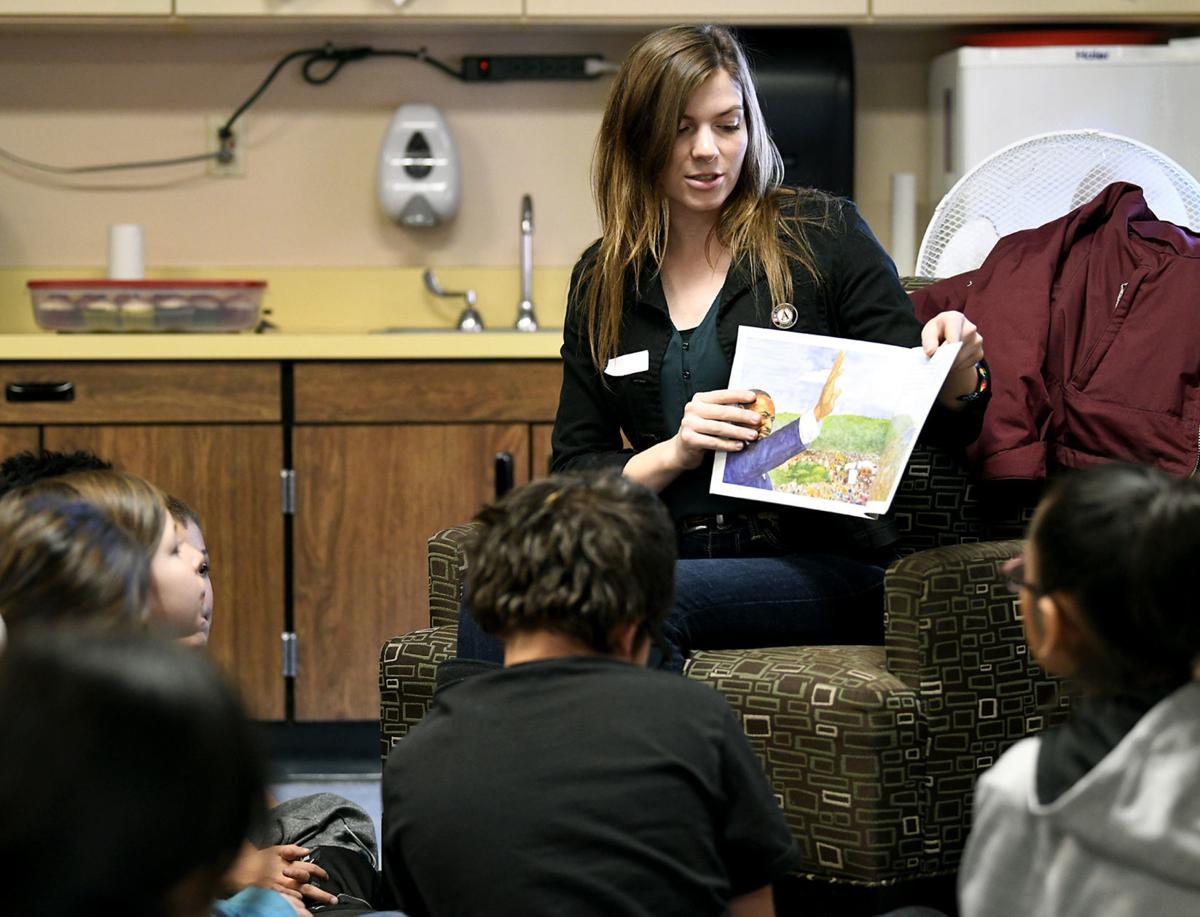 Megan Ahern, a Montana AmeriCorps leader, reads a book about Martin Luther King Jr. to a class of third graders at Linderman Elementary School in Polson on Friday. Volunteers and leaders across Montana and the country are leading "Read for Peace" events at schools in honor of Martin Luther King Jr. Day on Monday. 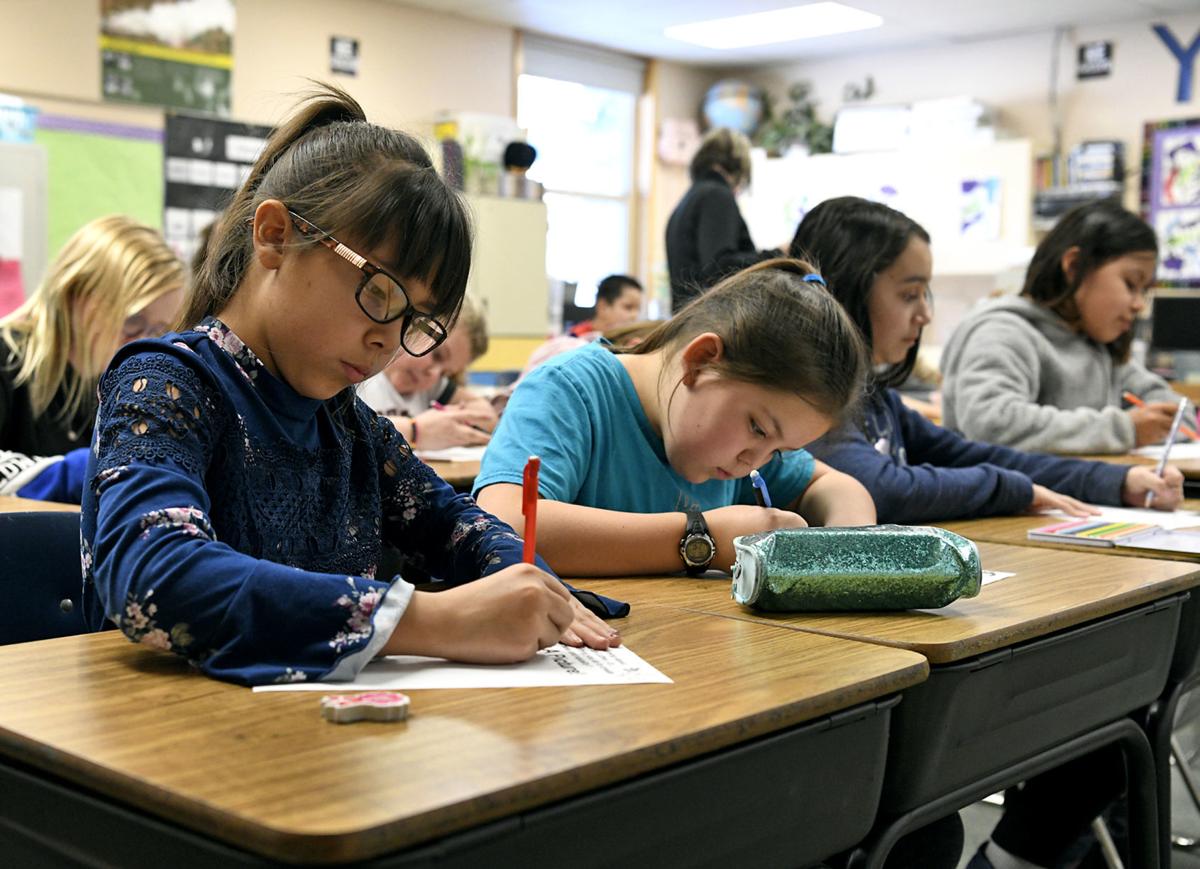 Linderman Elementary fourth-graders Kinzee TakesHorse, Audrey Matt and Dana Stanley, from left, make drawings of what peace means to them during a "Read for Peace" event.

POLSON — The concept of equality became a little easier to understand for Linderman Elementary School students who listened Friday to stories about the life and work of the Rev. Dr. Martin Luther King Jr.

“It’s inspiring to see how it’s so hard for some of them to understand the concept of inequality because equality is the norm,” said Megan Ahern, a Montana AmeriCorps leader with Montana Campus Compact and Upward Bound.

Ahern is one of a handful of Montana AmeriCorps State, AmeriCorps VISTA, and Senior Corps leaders who led "Read for Peace" events at schools across Montana, and America, in honor of Martin Luther King Jr. Day on Monday, Jan. 20. The volunteers and leaders — including Gov. Steve Bullock, First Lady Lisa Bullock, and Lt. Gov. Michael Cooney, who held readings in Helena — aim to educate students about equality and the causes for which the civil rights leader stood.

"They’re learning about equality and fairness, and I think it’s important to be getting those ideas to youth as early as possible," Ahern said.

In each class she visited, Ahern read two picture books that informed students about King's life as a child, when he learned about slavery and was discriminated against. One book showed “whites only” signs that separated children from playing together or attending the same schools. It showed him giving his famous "I Have a Dream" speech on the National Mall in Washington, D.C. And it showed the effects of his work, which resulted in anti-segregation laws. The illustrations showed "whites only" being taken down — and people gathering around his body when he was shot. King, a pastor also jailed multiple times while leading civil rights demonstrations, was assassinated in 1968.

After reading, Ahern asked the kids what they learned.

“He wanted peace for everyone,” said Leticia Leon, a third-grader in Steph St. Clair’s class.

The students also wrote poems and made drawings that depicted how they define peace, with the prompt: "What is something you can do to create fairness and equality?"

"I've been very impressed with the maturity level of a lot of these kids," Ahern said. "They’re telling me they’re learning about segregation, and I had a student in Charlo tell me about the Jim Crow laws."

Christine Ayers, a fourth-grade teacher at Linderman, said the curriculum she teaches does not focus on King, although they mention him in the context of other units about human rights. She said it was helpful to have the opportunity Friday to educate the students on him specifically.

“I think it’s important because sometimes it gets brushed aside because we feel like there’s more pressure for reading and math. But it’s also important for kids to realize they matter in the world,” Ayers said.

'Listen to them,' a friend yelled. But the Missoula man killed by police didn't

A friend of the man shot Wednesday by Missoula police said he shouted to his friend to listen to authorities as they urged him to put down his gun during a confrontation in the Hollywood Trailer Court.

The Missoula City Council approved an agreement for Partnership Health Center to open a satellite clinic in the Missoula Food Bank and Community Center building.

The privately owned portions of the project, including the hotel/condo tower, are not getting any Tax Increment Financing from the city and will be completely privately financed.

Missoula kids form artwork out of the words of MLK

“Do you know who Martin Luther King is,” art history professor Aja Mujinga Sherrard asked a girl who came up to a table covered with photos an…

Megan Ahern, a Montana AmeriCorps leader, reads a book about Martin Luther King Jr. to a class of third graders at Linderman Elementary School in Polson on Friday. Volunteers and leaders across Montana and the country are leading "Read for Peace" events at schools in honor of Martin Luther King Jr. Day on Monday.

Linderman Elementary fourth-graders Kinzee TakesHorse, Audrey Matt and Dana Stanley, from left, make drawings of what peace means to them during a "Read for Peace" event.