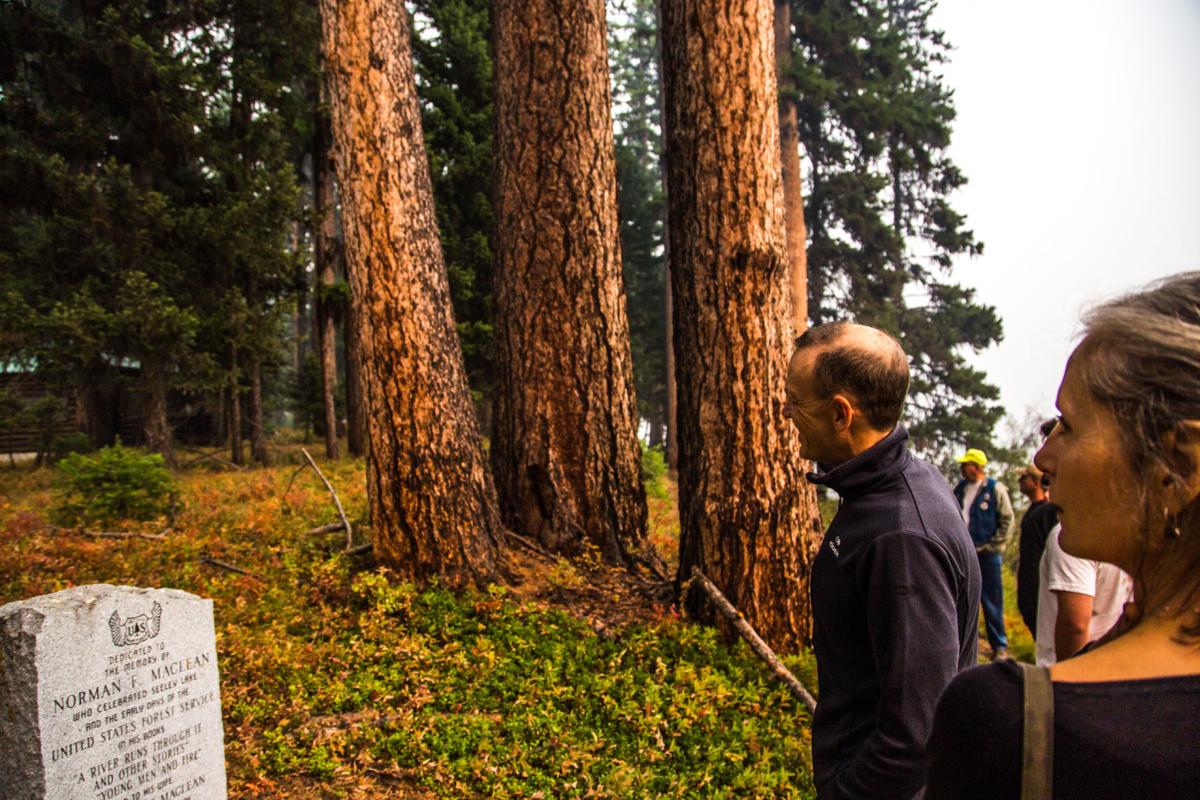 Deanna Tennancour and Timothy Schilling look through the trees at the Maclean family cabin on Seeley Lake on Friday, during a tour centered around Norman Maclean's life in the area. The tour kicked off the "In the Footsteps of Norman Maclean Festival," a literary festival that presents stories from the Blackfoot River, and this year, coincides with the 25th anniversary of the release of the movie "A River Runs Through It." 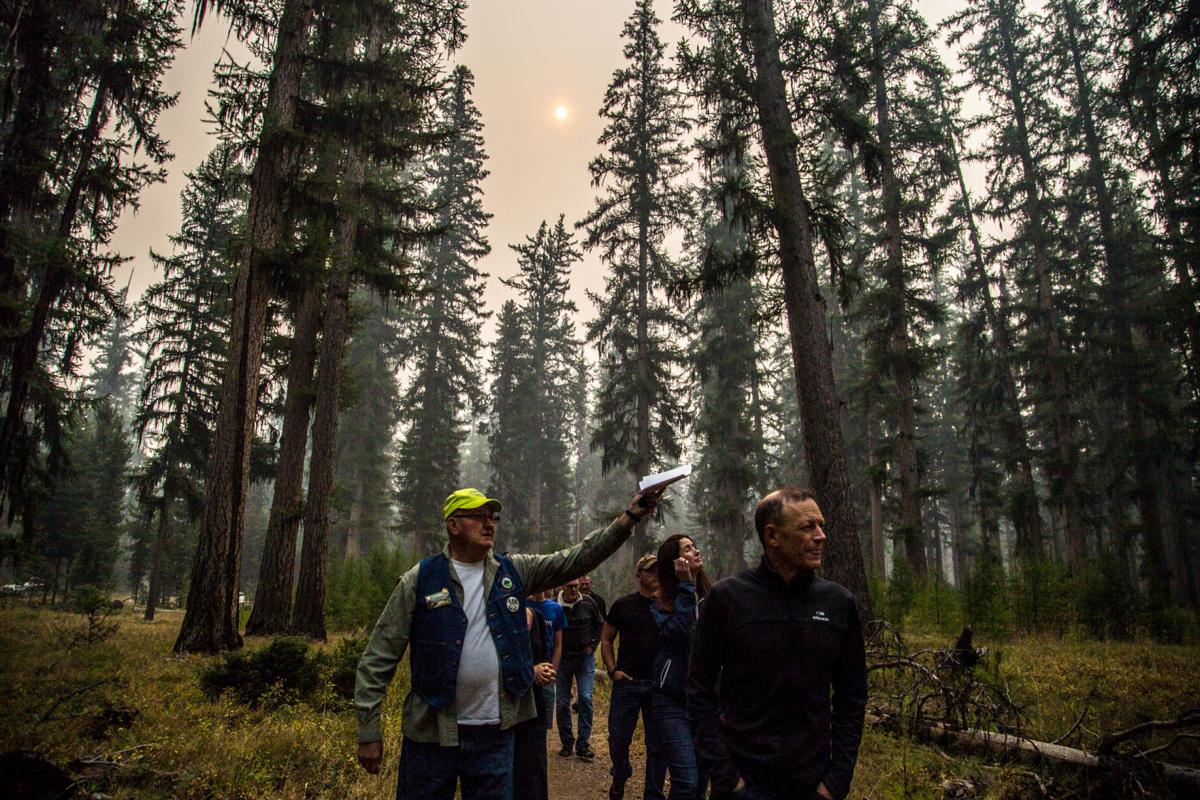 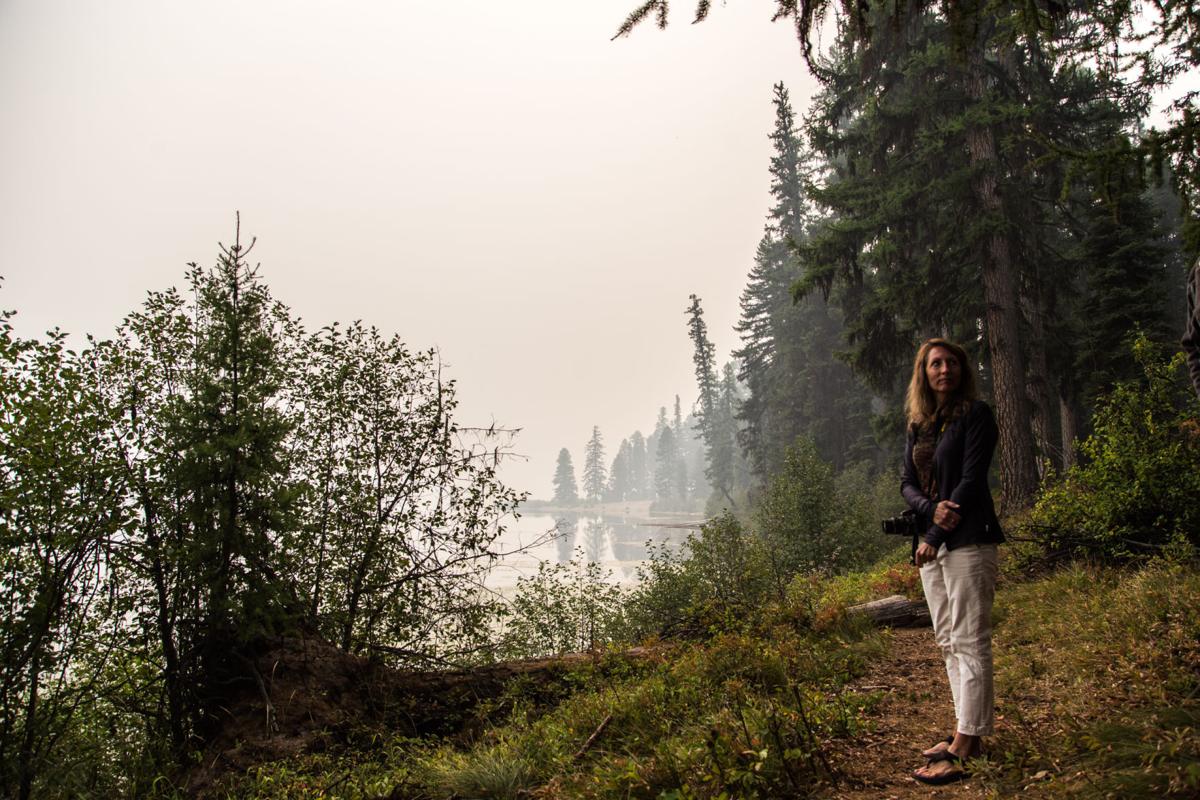 Mary Nash of Chicago and North Carolina stands on the smoky shore of Seeley Lake behind the Maclean family cabin. 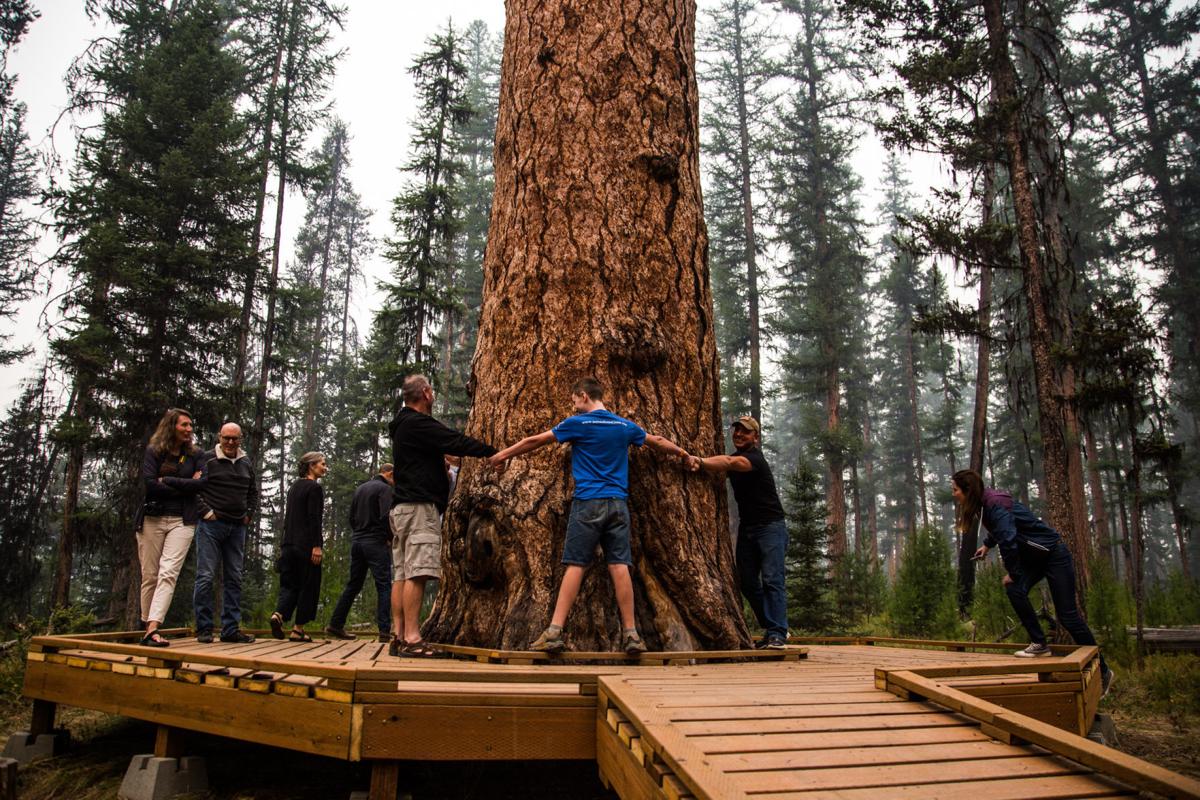 "Gus," near Seeley Lake, is the largest known western larch in the world with a girth of 23 feet and a height of 153 feet.

SEELEY LAKE — Ron Cox stood on the grounds of Tamarack Resort on Friday and pointed westward.

Somewhere through the ghost smoke of wildfires, on the invisible far shore of Seeley Lake, close friends Norman Maclean and George Croonenberghs had neighboring cabins on Forest Service lease land for much of the 20th century.

“Several years ago we were having a fundraiser here at Tamarack when the museum and historical society were just getting started, and George Croonenberghs was here,” Cox told about a dozen people who’ve come to the Seeley and Missoula area this weekend for the second Norman Maclean literary festival.

“He was telling me their daily ritual was to get in their rowboat, row across the lake — and it was probably about a mile from their cabin to here — come in, get their cigarettes and mail and their milk and row back across the lake,” Cox said. “So that was their visit to the big city, which was the post office and general store here.”

It was the final stop on a 2½-hour auto tour of “Norman’s Neighborhood,” a clockwise loop around the lake on Boy Scout Road and Highway 83.

Cox, of the Seeley Lake Historical Society, is retired for most of the past two decades after a 30-year career with the U.S. Forest Service and he can tell plenty of stories of these woods. His tour was one of the first events of the three-day festival, and he had a captive audience in the eerie atmosphere. The air quality registered the top level of Hazardous throughout the morning, and the lake itself — known for its pristine beauty — was all but unseen from just a few yards away.

Two of the small tour group came from Europe for the Maclean festival. A family of six is in town from Priest Lake, Idaho. Michael Manning and Mary Nash showed up from Chicago and booked rooms in the Double Arrow Resort before most of the activities were moved to Missoula. They turned down an offer to cancel their reservations and were glad they did.

“We had a wonderful dinner last night at the lodge,” Nash said.

Cox’s stepdaughter, Deanna Tennancour, joined the group. A fan of “A River Runs Through It,” Tennancour lived in England for 14 years before she moved recently to Seattle. She came to Seeley Lake because Cox and his wife, Elva, were among the hundreds evacuated from Seeley Lake recently for the Rice Ridge fire.

“I wanted to make sure they were all right. Truth is, they were fine,” Tennancour said, adding she had no idea her stepfather knew so much about area history.

They stopped first at the Lodges at Seeley Lake, where Missoula Mercantile giant Walter McLeod entertained Charles Lindbergh for lunch in September 1927. Cox said Lindbergh was taking a break from a promotional tour in the Spirit of St. Louis after his historic transatlantic solo flight in May. The Anaconda Co. spirited him in an automobile caravan from Butte through Ovando to a lake in the Swan Valley then known as Elbow. Today it’s Lindbergh Lake.

That was the same summer a 25-year-old Norman Maclean spent back from college, logging in the Blackfoot Valley not far from here and forming the basis for one of his “other stories:” "Logging and Pimping and 'Your pal, Jim.' ”

Six of the “tourists” joined hands to form a ring around the 22-foot, 9-inch base of “Gus,” the 1,000-year-old world champion western larch across the road from Camp Paxson. The camp, Cox said, was originally a Boy Scout tent camp and later the camp for the earliest smokejumper training camp.

It’s right down the road from the Maclean cabin, built starting in 1922 by Rev. John Maclean, with help from sons Norman and Paul. It remains a touchstone for the family, many of whom are in town for the Maclean festival.

In the gloom of smoke near the silent lake, Cox stopped the group short of the small cabin, in deference to the family.

“You can just feel the aura of the Macleans, can’t you?” he said with a smile.

They were near a rough-cut stone monument erected in 1992, two years after Norman’s death, by Missoula smokejumpers, the Forest Service and the Macleans. It’s dedicated to the memories of Norman and his wife, Jessie.

Up the road, Cox led the group through the woods to the site of the Dr. Warren Thieme homestead. A smokehouse nearby is the lone building standing. Cox said Thieme successfully lobbied Missoula County in the 1920s to annex the Seeley Lake area from Deer Lodge County and build a modern road from Missoula.

After a full program of events at the First Presbyterian Church, 235 S. Fifth St. W., in Missoula on Friday afternoon, and a gala dinner on the Blackfoot River in the evening, the Maclean festival resumes with a full slate on Saturday and Sunday.

“It’s amazing to me how far people come for this thing,” Cox remarked.

Shane and Val Crist drove from Spirit Lake, Idaho, with their four grown children. Why?

“My wife,” Shane Crist said. “She just enjoys (Maclean’s) writing, and she’s always wanted to do this. So 20 years later we’re here doing it.”

Timothy Schilling is American-born but came for the weekend from his home in the Netherlands, where he’s a theologian at a national institute that works with Catholic parishes. Among his duties is writing articles such as the one he published last year on the religious themes in Maclean’s writings. It was called “The River Runs On: Norman Maclean’s Christian Tragedies” and netted an invitation to the festival from John Maclean, Norman’s son and also an author.

Schilling will be on the first panel Saturday morning at the First Presbyterian Church in Missoula to share his insights on Maclean's writing.

Year after year, Norman Maclean was drawn from his work at the University of Chicago to the family cabin on Seeley Lake. It was here, musing in his bathtub and sitting at a schoolchild’s desk at the window, that he wrote the bulk of “A River Runs Through It and Other Stories.”

“He talked about being bipolar and talked about coming back West every summer,” said Schilling, who grew up in Port Angeles, Washington, and rode a Greyhound bus through these parts to college at Princeton University in New Jersey. “I have that same thing going. There are just so many things in his writings that I can relate to, on so many levels.”

Naomi Deasey drove a rental car up from Clinton, where she’s staying with friends after flying to smoky Montana from her home in Leominster, England. That’s 2½ hours north of the University of Exeter, where two years ago Deasey wrote her master’s thesis on Maclean and “A River Runs Through It.”

That was the same year the Alpine Artisans and their partners staged the inaugural Maclean festival at Seeley Lake.

“I wish I could have come to the first one,” Deasey said wistfully.

Nash and Manning split time between her home in North Carolina and Chicago, where he teaches at Benedictine University. Maclean’s own teaching career was spent at the University of Chicago, but that wasn’t how Manning came to him.

He’s a professor for Benedictine’s Center for Values-Driven Leadership and said he uses in his teachings a 1993 analysis written by Karl Weick called “The Collapse of Sensemaking in Organizations: The Mann Gulch Fire.”

Maclean’s "Young Men and Fire," published in 1992 after his death, is about the Mann Gulch disaster in 1949 north of Helena. It’s the basis for Weick’s article that Manning said is a work “to see what people do when they can’t make sense out of a situation.”

Haunted by waters: 'A River Runs Through It' 25 years later

Norman Maclean taught at the University of Chicago from 1928 until 1973, retiring as the William Rainey Harper Professor of English. He was ol…

There’s the movie, of course.

A Red Flag Warning is in effect for much of western Montana Saturday afternoon, as high winds threaten to spur fire activity across the area.

A remnant of one of Montana’s biggest mining disasters takes the No. 1 seed into the state historical society’s version of March Madness.

Deanna Tennancour and Timothy Schilling look through the trees at the Maclean family cabin on Seeley Lake on Friday, during a tour centered around Norman Maclean's life in the area. The tour kicked off the "In the Footsteps of Norman Maclean Festival," a literary festival that presents stories from the Blackfoot River, and this year, coincides with the 25th anniversary of the release of the movie "A River Runs Through It."

Mary Nash of Chicago and North Carolina stands on the smoky shore of Seeley Lake behind the Maclean family cabin.

"Gus," near Seeley Lake, is the largest known western larch in the world with a girth of 23 feet and a height of 153 feet.