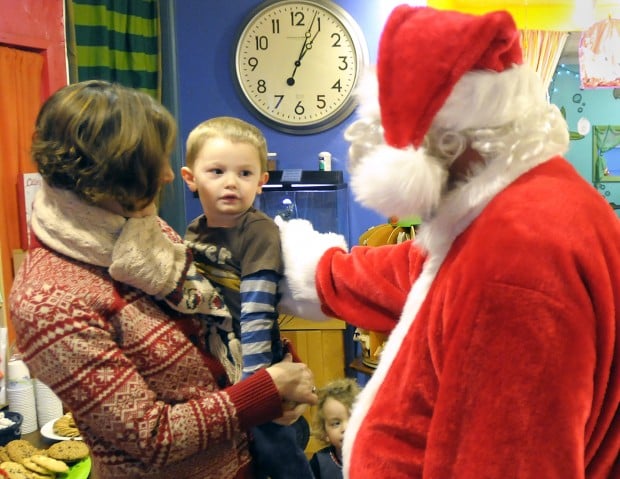 Three-year-old Heath Montgomery and his mom Jenny get a greeting from Santa Claus as he arrives at Walking Stick Toys on Saturday. 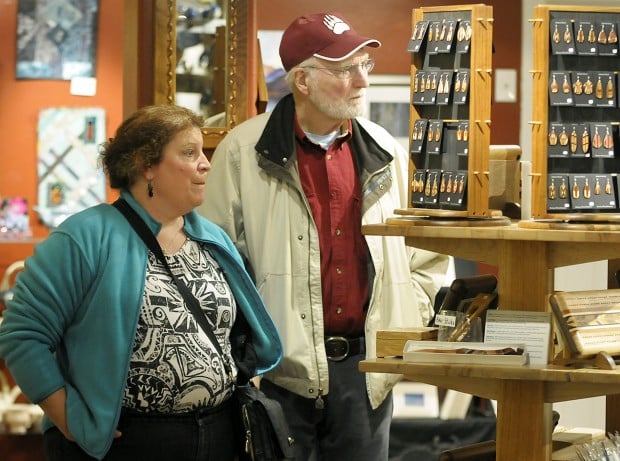 Jean and Ben Hagyard look at some of the items at The Artists’ Shop on Saturday in downtown Missoula. It was Small Business Saturday, which promotes supporting local businesses rather than big box store chains.

By GWEN FLORIO of the Missoulian

In terms of both space and clientele, Small Business Saturday doesn’t get much smaller than Walking Stick Toys on the Hip Strip.

There, a big crowd of small people awaited the arrival of Santa and Mrs. Claus on Saturday afternoon, far from the rush and crush of Reserve Street and the mall.

“You get a little more personal touch here,” said Ryan Montgomery who with his wife, Jenny, and 3-year-old son Heath browsed the store moments before Santa’s scheduled appearance.

That’s the whole idea behind Small Business Saturday, which touts the advantage of supporting local businesses during the holidays, rather than braving the box store Black Friday extravaganzas.

Jean Hagyard was recovering from the latter as she browsed the offerings in The Artists’ Shop downtown on Saturday afternoon. She confessed to a mall outing on Friday.

“That was crazy and busy and consumerism at its finest – or worst,” said Hagyard, who with her husband Ben recently returned to her childhood home of Missoula from Gig Harbor, Wash. “I like this better.”

“I stayed home and watched football” on Black Friday, confessed Ben Hagyard. But on Saturday, he accompanied his wife on a slow circuit of The Artists’ Shop, a cooperative featuring the work of several area artists. While busy Saturday, the store was not claustrophobic.

Member artist Glenn Parks, a ceramic artist who was running the shop Saturday, said several customers mentioned they were shopping specifically because of Small Business Saturday. As part of the nationwide event, American Express offered $25 back on a one-time purchase of more than $25, and Parks said customers were taking full advantage.

At Walking Stick, owner Erika Hickey said customers cited both the American Express offer as well as the store’s own deep discounts on Saturday. “It all brings in extra people to the store,” she said.

Santa might have had a little something to do with that, too.

Heath Montgomery went into the store with his mind made up. He was going to ask for froggy slippers. And indeed, Santa assured him that “froggy slippers will keep your feet nice and warm.”

As certain as he was about his slippers, Heath seemed a little shy around Santa. Not so the older kids in the store, who knew the drill: Perch on lap. Smile for cameras. Make requests.

One difference from a typical mall Santa experience: Instead of elves, Santa and Mrs. Claus were aided by two red-fedora’d helpers, 8-year-old Simon Hickey and his 5-year-old brother, Gus.

“You look like the Blues Brothers of the North Pole,” Santa quipped.

And, in another difference from a long line wending through a mall, kids waiting to see Santa at Walking Stick had the distraction of being surrounded by the small store’s toys. Eight-month-old Jaxten Bykari of Arlee fondled some fabric blocks as he and his mother awaited their turn with Santa.

His mom, Jessica Bykari, left the store with those same blocks, along with a bagful of other toys. She said she hadn’t known about Santa’s visit when she went to Walking Stick to take advantage of the Small Business Saturday specials.

“It’s a lot different than what Target has to offer,” said Bykari. “I like the wooden toys, the organic stuff.”

Annie Emmerich, 5, may have been overwhelmed by the selection. In any event, she couldn’t make up her mind what she liked, not even during her big moment with Santa.

That was OK, Santa assured her. “I’ll just look for your letter in the mail.”

Besides, said her mother, Kate, they’d return to Walking Stick, especially after Annie’s little brother – expected a week from now – is born.

“I know how much effort and energy it takes to keep small businesses thriving,” Kate Emmerich said. “We want to help.”

Three-year-old Heath Montgomery and his mom Jenny get a greeting from Santa Claus as he arrives at Walking Stick Toys on Saturday.

Jean and Ben Hagyard look at some of the items at The Artists’ Shop on Saturday in downtown Missoula. It was Small Business Saturday, which promotes supporting local businesses rather than big box store chains.