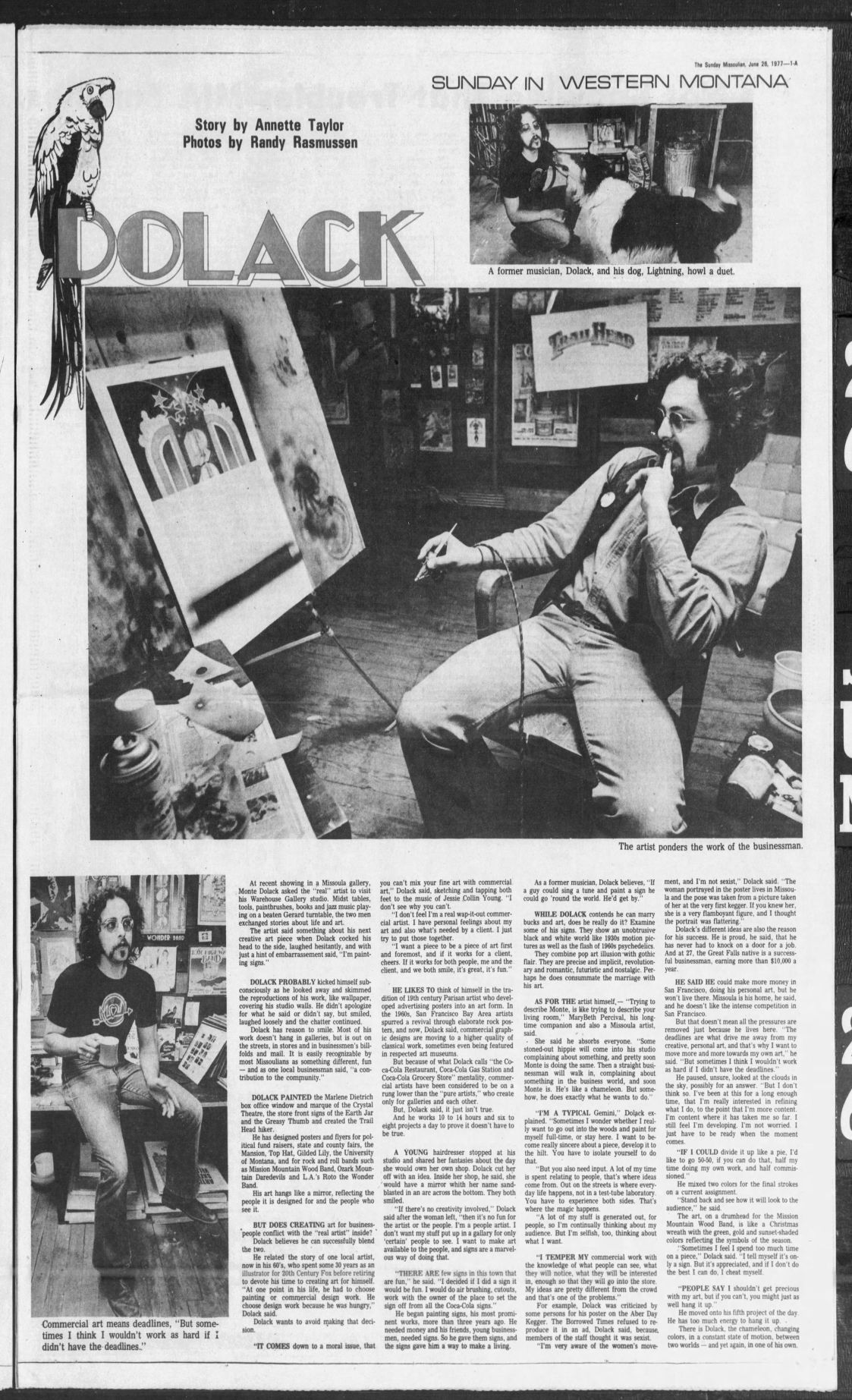 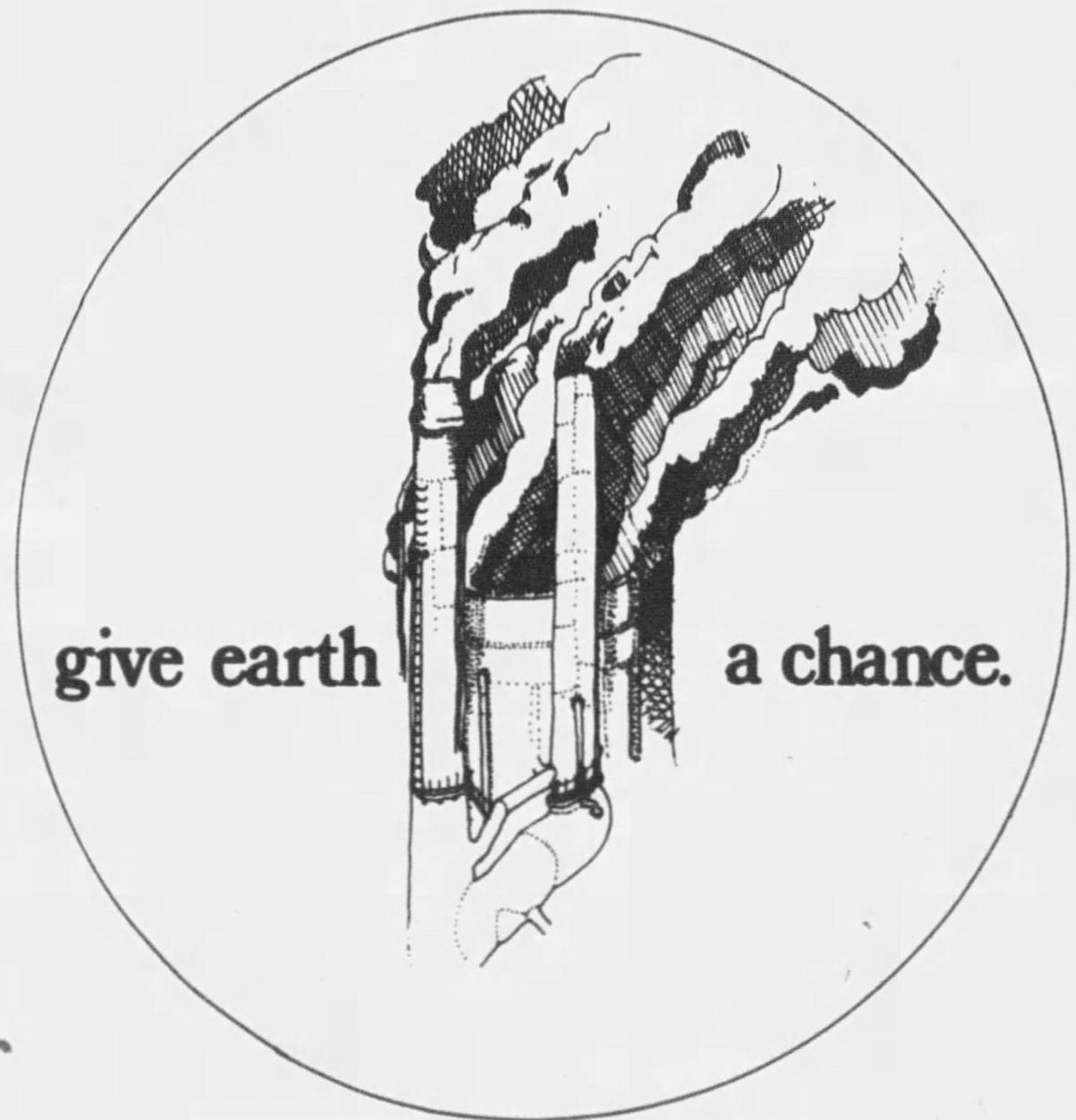 Her name first appeared on the Missoulian’s radar in August 1966.

"Mrs. Annick Smith, Chicago, S," (for Sentinel)" was on a list of 48 new teachers hired by the Missoula County High School system.

Monte Dolack’s initial mention in the newspaper was his unique letter to the editor in 1970.

"Having just recently moved to Missoula as a student, my wife and I were sickened to find the amount of pollution contained in this beautiful city's air," he wrote. "We are concerned, not only of Missoula's problem, but of its industries' contribution to the whole earth's fast sickening condition."

Below the letter, opinion page editor Sam Reynolds ran Dolack's illustration of a belching smokestack impaling the words: "Give earth a chance."

Now approaching the far ends of their long careers, Smith and Dolack were among six Montanans in Helena on Dec. 7 to receive the Governor's Arts Award from the Montana Arts Council.

The paths they followed in the 1970s and '80s — Smith as a filmmaker and writer, Dolack as a graphic artist — catapulted them to national and even international recognition. Each contributed mightily to stamping Missoula as the arts center it has become.

Missoulian online archives (missoulian.newspapers.com) reveal that Smith made her mark in the late 1960s not as a schoolteacher or a movie producer but as assistant director for the Missoula-Mineral Human Resources Planning Department. She was part of a group intending "to develop as much of the river banks (as feasible) within the city limits as recreational sites." She helped spearhead development of a child care program and addressed housing problems for the poor. And Smith advocated for the rights of low-income people to become administrators of poverty programs.

Smith’s husband, Dave, taught English at the University of Montana. Before a heart attack in May 1974 claimed his life at age 41, the Smiths had teamed up to produce "The Lady in Kicking Horse Reservoir," a film on Richard Hugo's career as a poet. A showing in early January 1972 spawned the first mention in the Missoulian of Annick’s filmmaking.

On Aug. 28, 1977, the newspaper noted that she and Beth Chadwick would introduce that night another film on Hugo at the Crystal Theater called "Kicking the Loose Gravel Home."

Meanwhile, Dolack opened for business in 1974.

The Missoulian Entertainer’s first of thousands of mentions of a Dolack exhibit came on Oct. 11, 1975: "Monte Dolack and James Clayborn will show their exhibition of design poster work at the Warehouse Gallery now through Oct. 26."

A business report the following March told of new life breathed into an old brick warehouse at 725 W. Alder, where Dolack, Tom Schultz, Hal Mathew and Marty Baker had opened the Warehouse Gallery. That had ushered in a string of new enterprises, including the Spaghetti Station.

"Dolack has a sign shop and does graphic art," the business story said. "Schultz and Mathew are potters, and Baker handles imports."

By 1977, Dolack’s distinctive work merited a full-page cover story in the Sunday in Western Montana section.

It ran on June 26 and was titled simply “Dolack.” The artist illustrated it himself with a parrot perched on the “D,” one toe clinging to the top. A photo by Randy Rasmussen bore the cutline: “A former musician, Dolack and his dog, Lightning, howl a duet.”

Reporter Annette Taylor pointed out as examples of Dolack’s artwork the Marlene Dietrich box office window and marquee of the Crystal Theatre, storefront signs of the Earth Jar and Greasy Thumb and the Trail Head hiker.

“Most of his work doesn’t hang in galleries but is out on the streets, in stores and in businessmen's billfolds and mail,” Taylor wrote. “It is easily recognizable by most Missoulians as something different, fun — and as one local businessman said, a contribution to the community."

Mixing fine art with commercial art comes down to a moral issue, Dolack said. “I don't feel I'm a real wap-it-out commercial artist. I have personal feelings about my art and also what's needed by a client. I just try to put those together."

As the end of the 1970s approached, Smith and Chadwick, who by then was known as Beth Ferris, founded the nonprofit Wilderness Women Productions. They received a $600,000 grant from the National Endowment for the Humanities to produce “Burntfork,” a pilot for a public TV series that would explore the lives of women in the West from 1830 to 1930.

By October 1979, “Burntfork” had become “Heartland.” The story of Elinor Pruit Stewart, a Wyoming frontierswoman, received a favorable review in the New Yorker. Donald Barthelme singled out for praise Missoula 10-year-old Megan Folsom, who as Stewart’s daughter was “real and serenely beautiful.”

“Heartland” debuted on Nov. 24, 1979, in the Harlo Theatre in Harlowton, near the ranch in the Snowy Mountains where it was shot, and came to Missoula the following week. For the next several years, Smith, the executive director, and screenwriters Ferris and Bill Kittredge were frequent visitors to the newspaper pages for the film.

Smith’s later movie and writing projects trickled into the paper throughout the '80s. Then, on Nov. 27, 1987, came the first reference to a soon-to-be published, 800-page Montana centennial anthology, “The Last Best Place,” edited by Smith, Kittredge and an editorial panel.

More than 30 years and 1,700 Missoulian matches later, “The Last Best Place,” keeps resurfacing on these pages, usually accompanied by the names Smith and Kittredge.

Dolack remains active, though he closed his downtown studio a few years ago and lost wife and fellow artist, Mary Beth Percival, in December 2016.

“Not only is he arguably the most famous artist in Montana,” wrote the group who nominated him for the Governor’s Arts Award, “his work reflects the Montana we all know and love. His work represents so much of what we identify as Montana."

Missoula Rewound: Can't get enough of the rare yellow-billed cuckoo

Martin Hutchens was at the vanguard of a word trend in 1925 and probably didn’t know it.

It's Thanksgiving week and thoughts turn to Goodfellows.

A violent wind roared into Missoula on the evening of Dec. 27, 1892. It was still blowing when an unknown, high-spirited Missoulian reporter s…

When Hollywood came to Missoula

When you’re all done choppin’ down the poplar and pine

Montana author and writing master Bill Kittredge, who co-created the iconic “The Last Best Place” title for a compendium of Montana literature, died on Friday. He was 88.

William Kittredge remembered as an 'institution' in Western writing

Fellow writers and friends remembered the various facets of the life and work of William “Bill” Kittredge after his death on Friday at age 88.